Greening Up Neighborhoods in Senegal

Farming is a constant responsibility, but luckily we get a little time off in the winter when the crops are dormant. It’s the time I look to broaden my awareness of the world, and traveling to countries with intact agricultural societies is my favorite way to do that. I just returned from my 4th Winrock International/USAID Farmer-to-Farmer (F2F) assignment, this time in southern Senegal, teaching micro-gardening skills to trainers at the Horticulture Initiation Center in Ziguinchor. Micro-gardening is the growing of crops in the smallest of spaces: in recycled containers, or woven poly grain bags, even impromptu raised beds lined with brick and lined with plastic—whatever is available. Micro-gardening was identified some 15 years ago by the FAO as a way to provide access to fresh vegetables to the urban poor and unemployed, an increasing problem with the constant movement to cities from rural farmlands. We took a look at the existing projects in Dakar, based on planting tables using peanut hulls and rice hulls as a planting medium, and chemical nutrient solutions as fertilizer. As a certified organic grower, I of course immediately started looking for natural alternatives to the expensive imported fertilizer, and later we found just that: homegrown fertilizer produced using on-site chicken coops and vermicompost. 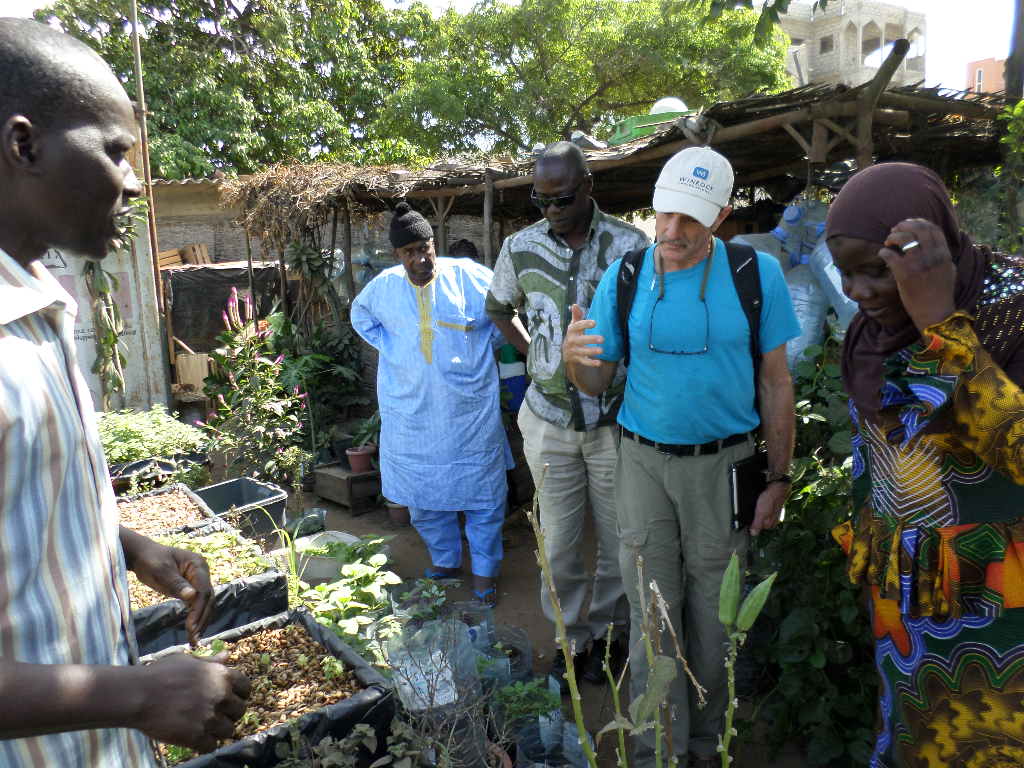 Arriving at the Horticulture Initiation Center in Ziguinchor, I felt immediately in my element, surrounded by beds of lettuce and cabbage, with the students busy each morning as we arrived, watering, shaping and fertilizing beds, planting and weeding. During the four-day session, I introduced both technologies from the States (‘Smart-Pot’ planting containers, seedling plug trays, hand-held seeders) and from Kenya (vertical grow bags and sack gardening); and in the afternoon practicums we adjourned to the garden to plant. 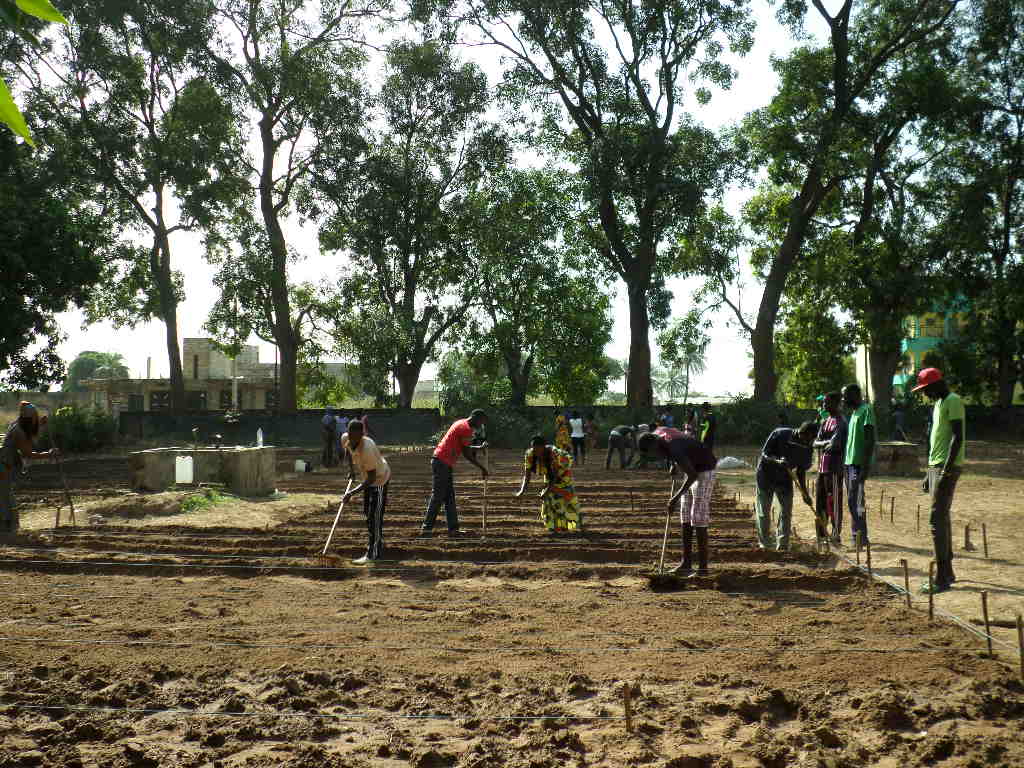 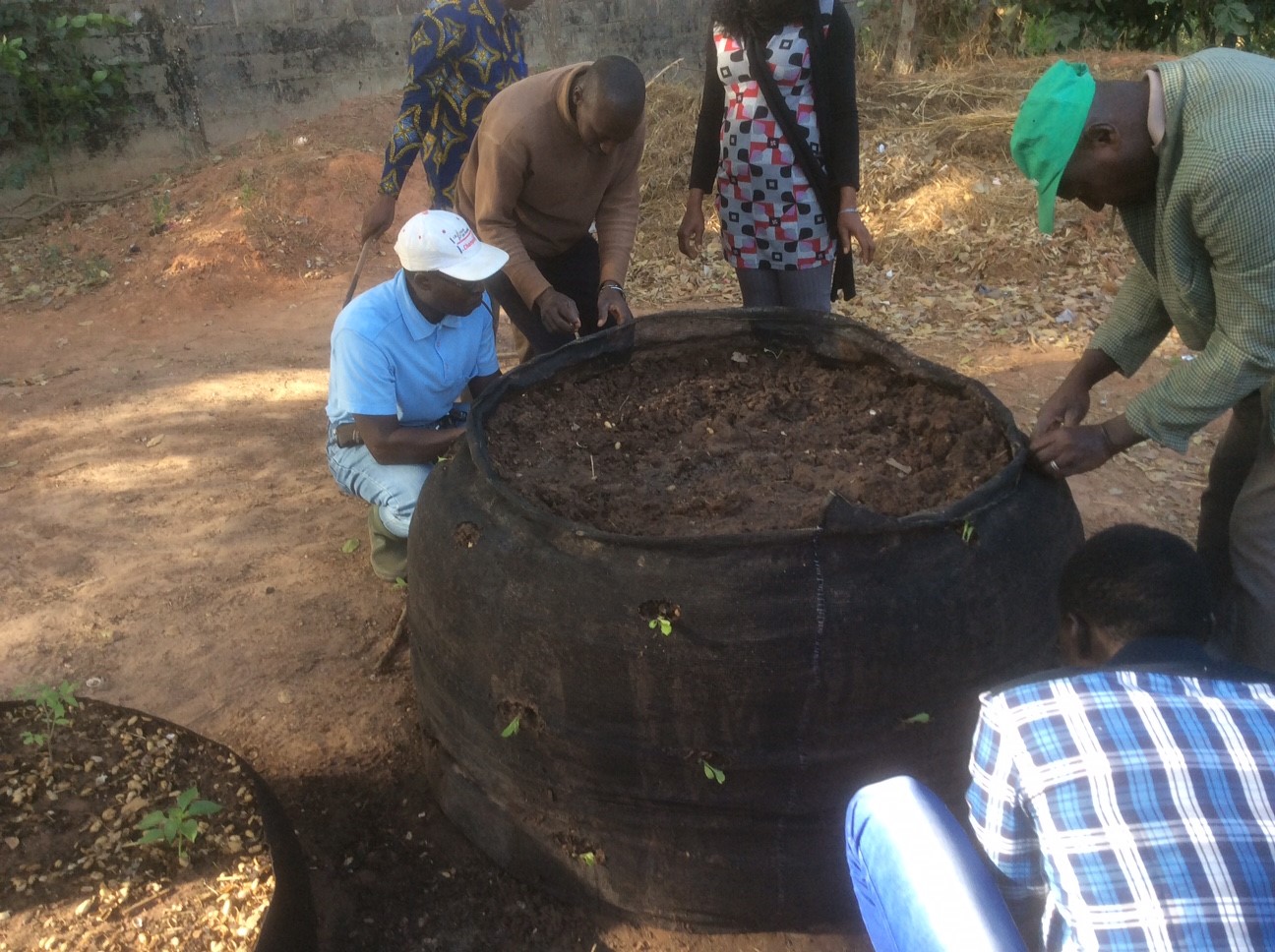 One afternoon, the only woman in class, Amy Diedhiou, invited us to visit her rice field where she was finishing up bundling the rice to carry home and thresh. While in the field visiting with Amy and her sisters, Amy’s husband called on her cell phone and asked to talk to me. He said, “Mark, thank you so much for coming to Senegal. We have a lot of energy, but no means, and we can’t see the way forward. Please think very carefully about this for us.” I spent the rest of the evening pondering this. What are the wisest investments that can help transform these subsistence growers into market producers? The question is pressing, open-ended, and creative…and will not be forgotten. 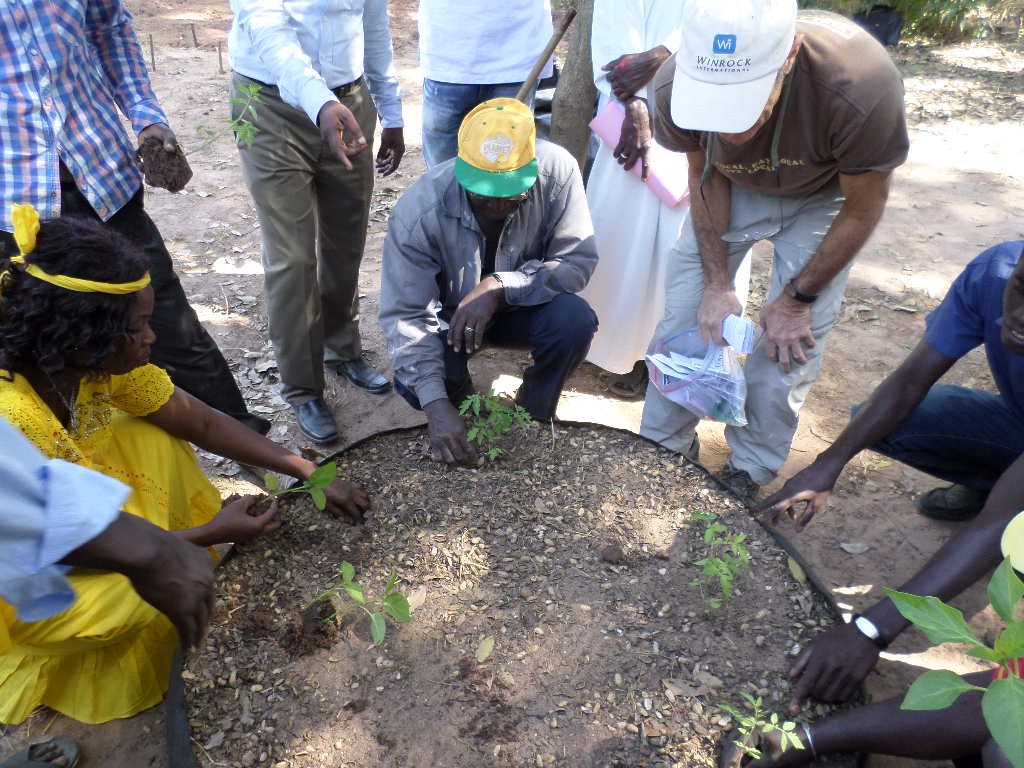 We spent time in class discussing the expansion of micro-gardening to micro-market farming, and the importance of crop choices for maximum profits and tight crop scheduling for year-round marketing. Hopefully, all these topics will be included and expanded on by the trainers in their respective horticultural schools. 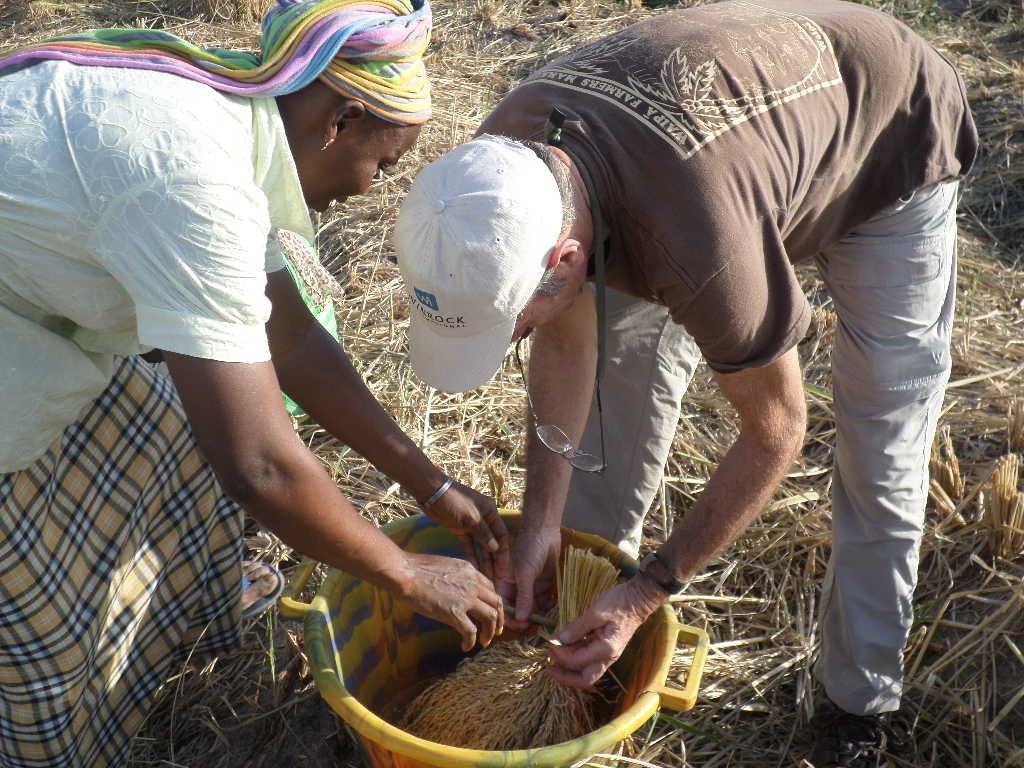 When farmers meet farmers across oceans of cultural difference, hearts expand and we recognize each other immediately. I can’t think of a better way for an agriculturalist to spend their ‘off-season’ than to meet and share with their global counterparts–everyone is enriched from that meeting.

In June, I had the honor and pleasure of traveling to St. Louis, Senegal to work with CONCEPT. I worked with CONCEPT’s dedicated training staff to develop a training program for artisans and agricultural processors.

In Senegal, per capita income is only $1,000 (less than 2% of that of the United States) and life expectancy is 66 years (vs 79 in the United States). Poverty in Senegal results in part from the weakness of the private sector and the shortage of strong business skills and behaviors.

The Senegalese non-profit organization CONCEPT has trained artisans and food processing micro-entrepreneurs in production. Artisans include carpenters, and food processing micro-entrepreneurs transform millet and other crops into food products. For example, some of CONCEPT’s trainees make a popular dish called “thiakry” from millet and milk and sell it on the local market.

After production training, the CONCEPT staff realized that the trainees also needed improved business skills to complement their technical skills to succeed in their microenterprises. CONCEPT solicited Winrock’s assistance to train its trainers in management and entrepreneurship. This training was intended to enable CONCEPT’s trainers to help artisans and food processing micro-entrepreneurs develop stronger businesses. 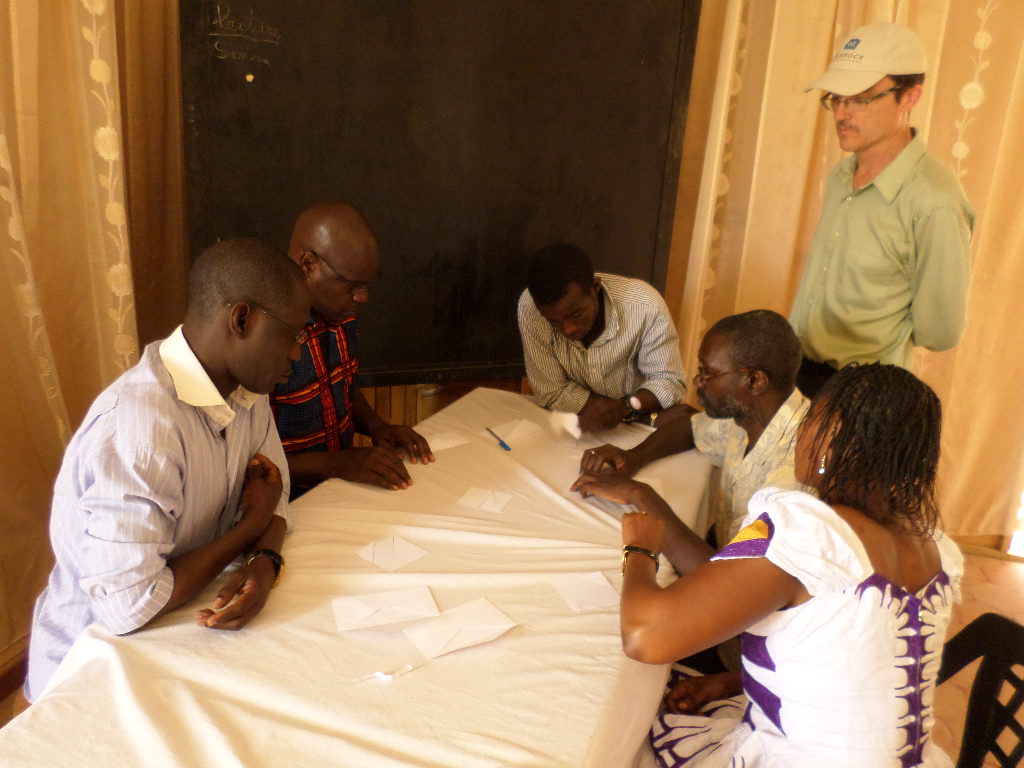 Under the USAID-funded Farmer-to-Farmer program with Winrock, I spent two weeks in Senegal training CONCEPT in management and entrepreneurship. Training was highly participatory with numerous games, exercises, case studies, and discussions. Topics included entrepreneurial behaviors, communication, marketing, communication, recordkeeping, financial analysis, and business planning. After the workshop, the CONCEPT trainers prepared a training session of their own to present to each other and to practice in preparation for training of local micro-entrepreneurs.

The training was held in St Louis, on the coast of northern Senegal near the border with Mauritania. The island of St Louis near the mouth of the Senegal River is on the UNESCO World Heritage list due to its past role as capital of Senegal and its distinctive colonial architecture. Although tourism helps the local economy, business activity needs to be stronger to raise living standards.

Since I visited during the Muslim fast of Ramadan, most of the local population was not eating or drinking during daylight hours. Although a day without food or liquid in the heat of St Louis can be tiring, the CONCEPT staff participated very actively in the training and showed strong motivation to pass on their learnings to their beneficiaries. 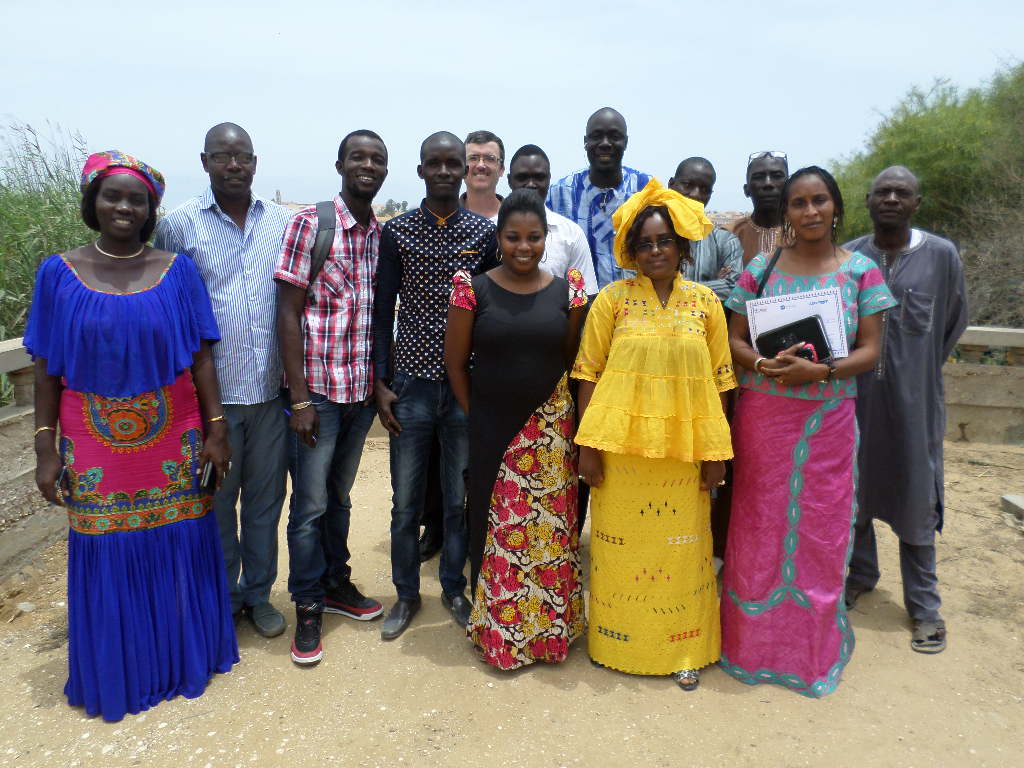 To me, human capital is more important than financial capital. My hope is that CONCEPT’s trainers will be able to empower micro-entrepreneurs in St. Louis to strengthen their businesses, thereby improving their lives and those of their employees and families.

Having Truly “been there”

In September, two volunteers completed Pesticide Safety Assessments for the Farmer-to-Farmer for Agriculture Education and Training program in West Africa. Sandra McDonald traveled to Guinea, and Ples Spradley completed an assignment in Senegal. The purpose of these assessments was to ascertain and evaluate pesticide safety, regulation, training, education, and use in the countries. Both Sandra and Ples are members of the American Association of Pesticide Safety Educators, a group focused on protecting human health and the environment through education. Sandra is the founder of Mountain West PEST in Colorado and works as a pesticide safety educator. Ples works for the University of Arkansas, Division of Agriculture as an associate professor and extension pesticide safety education specialist.

Sandra and Ples are first time Farmer-to-Farmer volunteers. Each of them knew Farmer-to-Farmer by its reputation and were excited to volunteer when they were approached by Winrock. Sandra said, “I’ve always been impressed with Farmer-to-Farmer. Transferring knowledge and technology to the ground level is the only way to make development work.” END_OF_DOCUMENT_TOKEN_TO_BE_REPLACED

Today’s blog post is from Roger Engstrom, a seasoned Farmer-to-Farmer volunteer. Roger has volunteered five times in Africa since January 2015 with Winrock and other implementers of the program. Most recent, Roger volunteered in Senegal and provided his provided technical assistance to the Horticulture Initiation Center of Saint Louis on agricultural mechanization:

“I was afforded a very warm reception at the Winrock office in Dakar and driven to Saint Louis, the former capital of the country, where I stayed in a hotel amongst government buildings, some of which were part of the slave trade.

The two weeks spent in Senegal, working with the director, staff and entrepreneurs associated with the Horticulture Training Institute, were a delight. The purpose of the assignment was to put into operation a rototiller which had never been used because it was in disrepair, and to develop a curricula for mechanized seed bed preparation and weed control.

I had some reservations when we went to get the tiller out, put air in the tires and assemble the various attachments. Particularly because the participants were wearing ‘city shoes’. My concern was unfounded, they put on rubber boots and were very enthusiastic about learning the theory of soil improvement as well as doing the hands on assembling and adjusting the tiller. Each wanted to operate the tiller as much as possible. It is a heavy, clumsy machine, so all participated until stamina was exhausted!

The following week included a conference of farm staff from several farms set up to encourage young people to engage in agriculture, rather than move to cities. Most of the learning was hands-on. Each day we traveled to a farm and the host staff explained the purpose of the farm and problems. That led to learning about diesel engines, generators, wells, pumps, filters, and drip irrigation. Tractor maintenance, machinery purpose, adjustment and operation were also observed. At a dairy farm, we discussed animal husbandry concerns and learned about milking equipment. By observing and asking questions, the participants learned much and took a load of things home to consider for their farm. We could have taken another week to explore more, as the questions and dialog were lively. 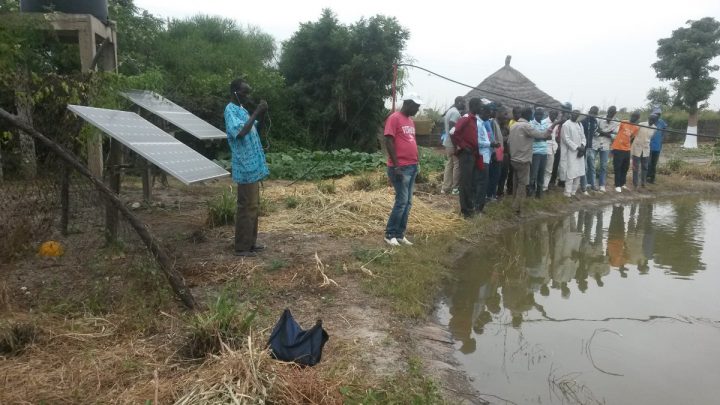 Farmers of the Horticulture Initiation Center of Saint Louis, Senegal 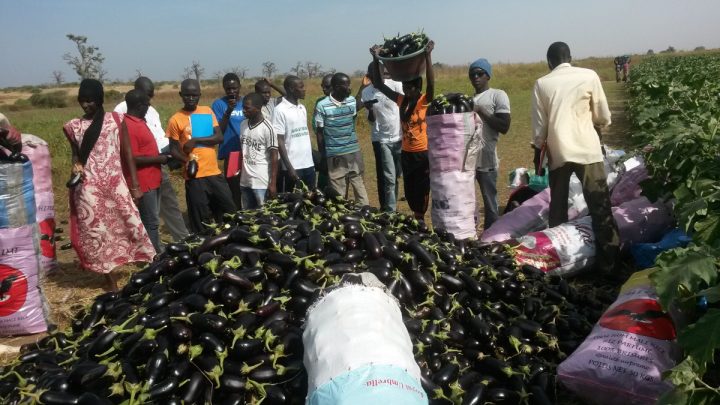 Finally, because I do not know French, special thanks goes to both interpreters who made a tremendous contribution.”

Rainbows and eager students in Senegal

Dr. Onesimus Otieno recently returned from a Farmer-to-Farmer volunteer assignment in Senegal, providing training and syllabus development on weed control for the Horticultural Initiation Center of Saint Louis. He shares thoughts from his assignment below:

“I arrived in Dakar, Senegal to an early morning rain. The rainbow never looked better as it marked the start of what turned out to be a great visit. My in-country hosts were there to meet me with a warm welcome into a world like no other.  The country office hosts were an exceptionally caring team that made me feel at home in minutes. I was there to develop a syllabus and teach a course on weed management with special emphasis on nutsedge at the Horticultural Initiation Center (CIH) in St. Louis, Senegal. This assignment was my first with Winrock and to West Africa.

At the school, we found very eager principal, teachers, and students ready to learn new skills and apply them right away. Schools were closed around the country and it was commendable that they would spend two weeks back on campus to review their curriculum in preparation for the new school year. We collaboratively produced a digital catalogue of local weeds. Thanks to Suleyman Diallo, a research scientist with the National Agricultural Research Institute, ISRA, we made a digital catalogue of all the 25 weeds found in the center’s garden with both scientific and local names. One of the techniques learned was to use animals for weed suppression in the vegetable gardens. Everyone had a chance to design a chicken tractor and one of the trainers took the lead as he also had experience and a local business making hen houses from recycled tin cans. 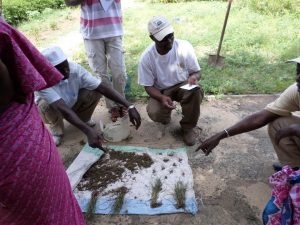 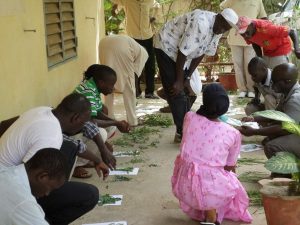 The days were busy with classes in the morning, which started with hands-on exercises and followed with lectures. The later part of the day was spent reviewing material with Pape Tall, the Winrock program manager who translated it into French and helped in delivery. We also reviewed the hands-on activities and tools with the principal, Demba Diop. The days went fast and I cannot help but marvel at the amount of work we covered.

I ate a lot of rice and fish with enough variation in both the fish and rice each time. I tried the popular local bissap, ginger and baobab drinks, which were an exceptional delight with the fataya (deep-fried wheat dough snack) during breaks between learning sessions. I owe a ton of gratitude to the people of Senegal, who opened my world to a new culture, languages and a different outlook of challenges and opportunities in agricultural production and training in skills development. Thanks to Winrock for making it happen. I look forward to updates from the CIH, St. Louis and more stories of the transformational changes around the world brought by the farmer-to-farmer program.” 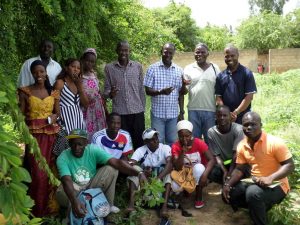