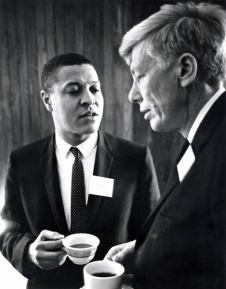 During its 31 years of operation, the A/D/C supported advanced degree studies of 588 men and women. Most attended universities in the United States; a few studied in Europe and Australia. The A/D/C also strengthened local academic institutions, sponsored conferences, and supported research initiatives.

The A/D/C was successful in identifying scholars with a deep commitment to serving their countries; more than 90 percent of A/D/C fellows returned home to assume leadership positions in academia, government and the private sector.

In 1985, the A/D/C merged with two other Rockefeller family-related organizations to become Winrock International. In 2004, on the 50th anniversary of the A/D/C, Winrock created the John D. Rockefeller 3RD Scholars Program to recognize Rockefeller’s lifelong contributions to international development and cooperation.

Today many A/D/C scholars continue to play important roles in rural development. If you were an A/D/C Fellow, or a Winrock Scholar in Asia, we want to reconnect with you.