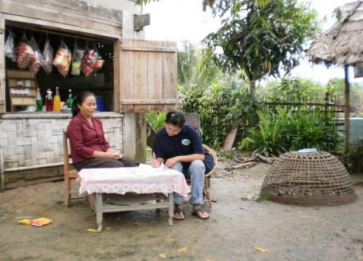 Lao PDR, Fall 2009: A member of the Lao research team conducts a household survey with a villager in a rural province.

New Research into Bio-security and Behavior Change
The research assessed key factors influencing behavior change related to bio-security practices among smallholder poultry producers in Cambodia and Lao PDR. The team thoroughly reviewed secondary data related to the outbreak history of both countries, interviewed key stakeholders including representatives from Government and NGOs, and conducted community and household surveys. They interviewed 700 small poultry producing households in Cambodia and 400 in Lao PDR. The team found that certain behavior changes – such as improved sanitation when cooking poultry – are effectively influenced by communication/media campaigns. However, other important behavior changes, like installing fences to separate flocks, and using veterinary inputs, may require more than messaging. The team found that for smallholders to adopt more capital-intensive bio-security practices, they must understand the impact on improved poultry productivity and income. The research team recommends that poultry producers receive training, financing and extension services to encourage them to adopt improved bio-security practices. The team asserts that increased government and donor support to smallholders will simultaneously increase productivity and safety. “Technical support, financial support with low interest rate loans, and marketing support to poultry producers should be considered”, says Lead Researcher Seng. The research team also recommends the government, NGOs and donors improve coordination to ensure uniform messaging that is consistent with central policies. 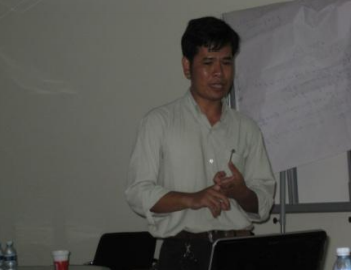 Cambodia, Spring 2010: Suon Seng presents the results of the team’s research at a workshop at NaVRI.

The team’s findings were used to develop policy briefs which were presented to key decision-makers to feed into future communications and technical interventions related to AI and other high-risk animal-human health concerns. The Cambodian policy brief is undergoing review for a peer-reviewed journal on agriculture and livestock in Southeast Asia. In April, team members Dr. Khamphouth (Lao PDR), and Suon Seng and Holl Sinal (Cambodia) attended an FAO workshop in Bangkok on “Regional Socio-Economic Impact Assessment of HPAI in Asia” as invited delegates from their respective countries. At the Bangkok meeting, the JDR 3RD Scholars team was selected to lead the Cambodian portion of an ongoing, multi-country assessment of risks associated with cross border poultry trade in Southeast Asia, funded by FAO. Seng also has been recognized for his contributions to the AI sector. He was selected to travel to Rome in June to participate in an expert review panel for the FAO’s participatory guidelines on phenotypic characterization of animal genetic resources, where he consulted on participatory approaches for assessing the socio-economic perspectives and interests of rural smallholders.