Luis took a break from the virtual welding station and approached a man holding a pen and a reporter’s notebook. Luis, 50, drives a forklift on an early-morning shift, he explained, and welding could be a path to a brighter and more lucrative future.

“It’s a good option for when I need a new job,” he said. As he talked, dozens of people mill around inside this small church on an early-November Friday night in Springdale, Ark., where the Walton Family Foundation tapped Winrock International’s Arkansas Regional Innovation Hub to conduct a popup from October 26 to November 23 to bring the latest technology to the area’s residents. “I hope for more events like this, because it’s nice for everybody in Springdale. I think people need options to learn.” 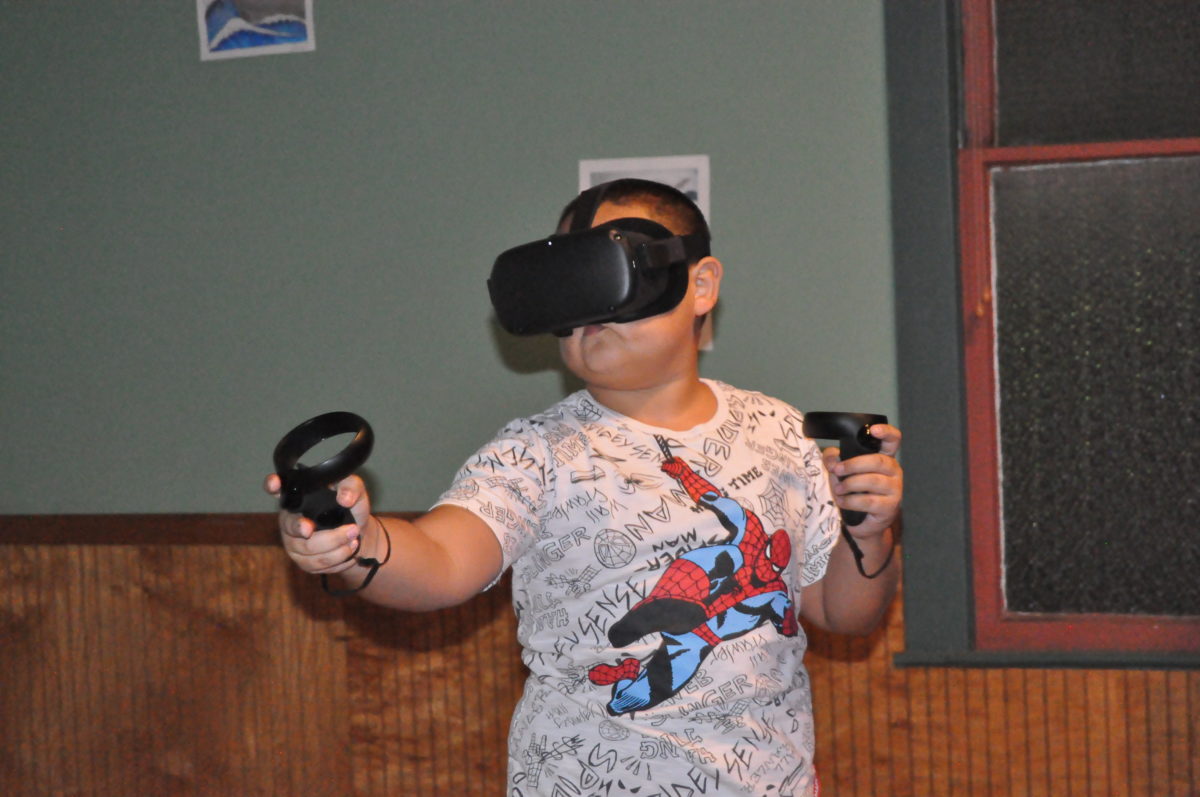 Mason, 10, got his first taste of virtual reality. The technology allows users full-body experiences such as swimming with dolphins and sharks and dueling with light sabers. Photo By Antony Ramos.

Most of the visitors hailed from the local, deeply rooted Hispanic, Latino and Marshallese communities. For many it was their first brush with 3D manufacturing and design, drones, laser-cutting, vector design and other cutting-edge technology. Designed to be inclusive of Spanish and Marshallese speakers, the popup — called the Innovation Hub NWA — featured partnerships with grassroots leaders and bilingual interns trained as facilitators, all connected to local entrepreneurs and organizations to create the ideal makerspace for the Springdale community. In the month that the Innovation Hub NWA was open, it reached 1,065 people, with many returning for multiple visits.

The Arkansas Regional Innovation Hub opened in North Little Rock five years ago as the first makerspace in Arkansas. Last year, it launched a new mobile makerspace program designed to visit rural communities and provide access to underserved communities. To date, the mobile unit has visited 20 counties and more than 16,000 people across the state, teaching the basics of screen printing, 3D printing, laser cutting and engraving, ceramics, STEAM activities and more to adults and children.

“When you teach someone things they didn’t know — and you provide them with experiences they never had — you can fundamentally transform where they end up in life,” said Dr. Chris Jones, the Hub’s executive director and lead maker. 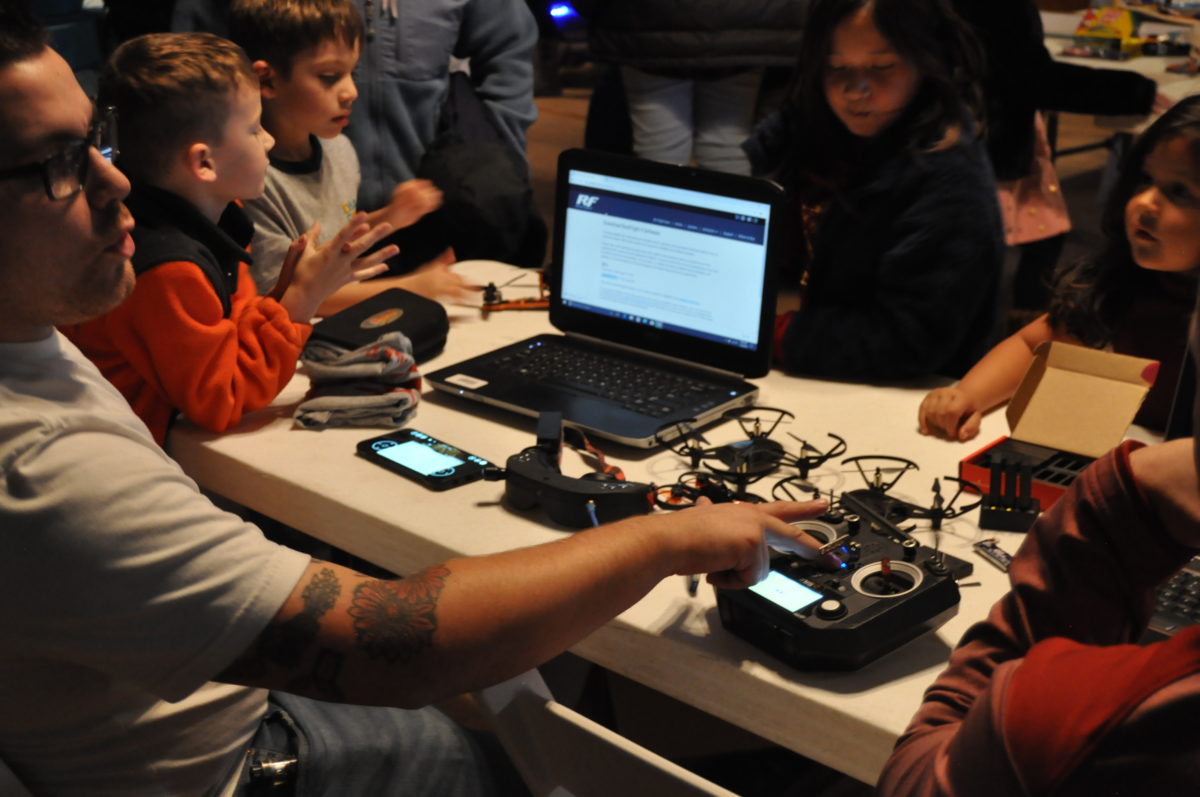 Dakoda Baker (left), an Air Force staff sergeant who interns with the Hub as a drone expert, showed children the ins and outs of drone technology. Photo By Antony Ramos.

Luis and his sons Carlos, 23, and Miguel, 18, echoed their father’s enthusiasm for the popup. “This is opening doors for people to see what they’re good at,” said Carlos, a local community college student. “They’ll know it’s not only office work they can do.”

“There’s so many applications that we as minorities aren’t aware of,” added Miguel, a student at the University of Arkansas, noting that he enjoyed learning about printmaking and engraving. The family is planning to start a restaurant, and that technology could come in handy as a low-cost option for printing their business logo at scale. 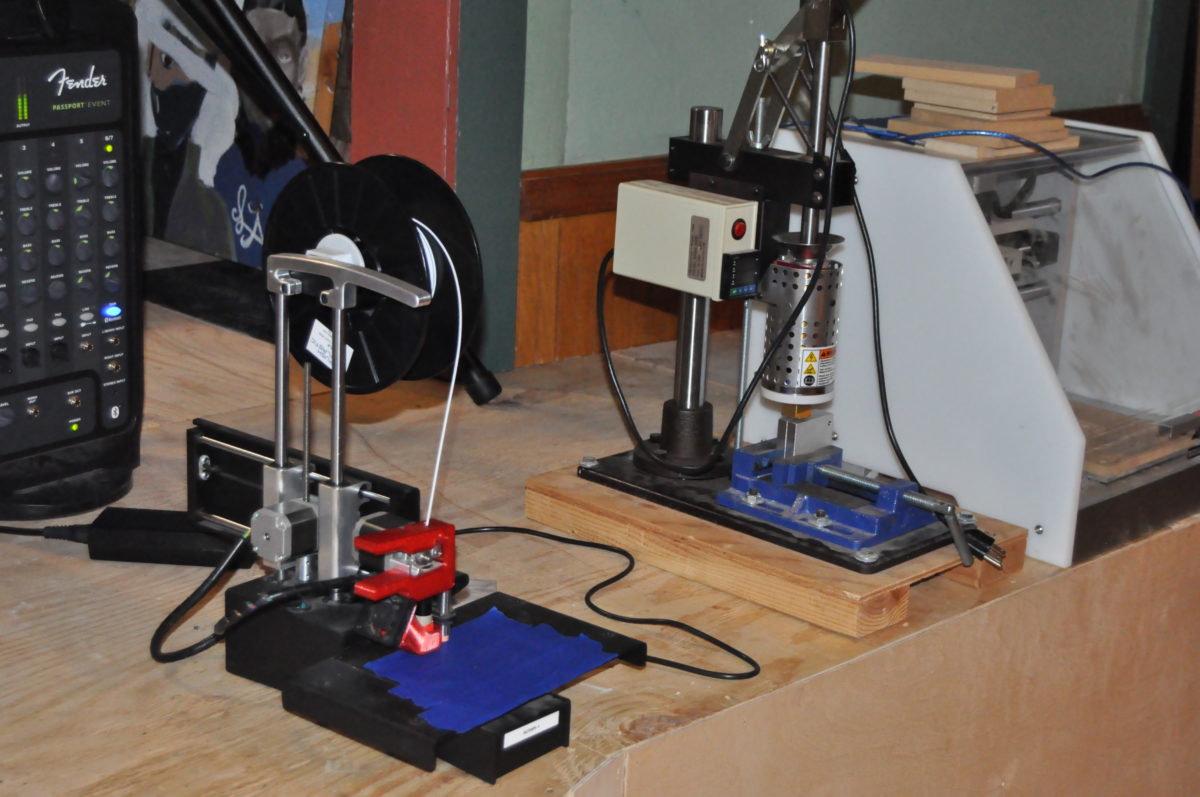 Marcia, 20, of Springdale sat next to her mother, Maria, and older brother Luis. Marcia studies graphic design at a local community college and dreams of one day working at local Fortune 500 companies Wal-Mart or Tyson Foods. The printmaking technology she’s encountered at the popup is a new experience, and potentially helpful to her future career, she said.

Marcia’s brother Luis, a realtor, said exposure to technology can make a big difference for the local Hispanic and Latino community.

“This is a really good thing,” Luis said. “Especially in this area, people don’t know about these technologies. The parents are always busy. So the kids need to know [this technology] so they can have access to the best jobs.” 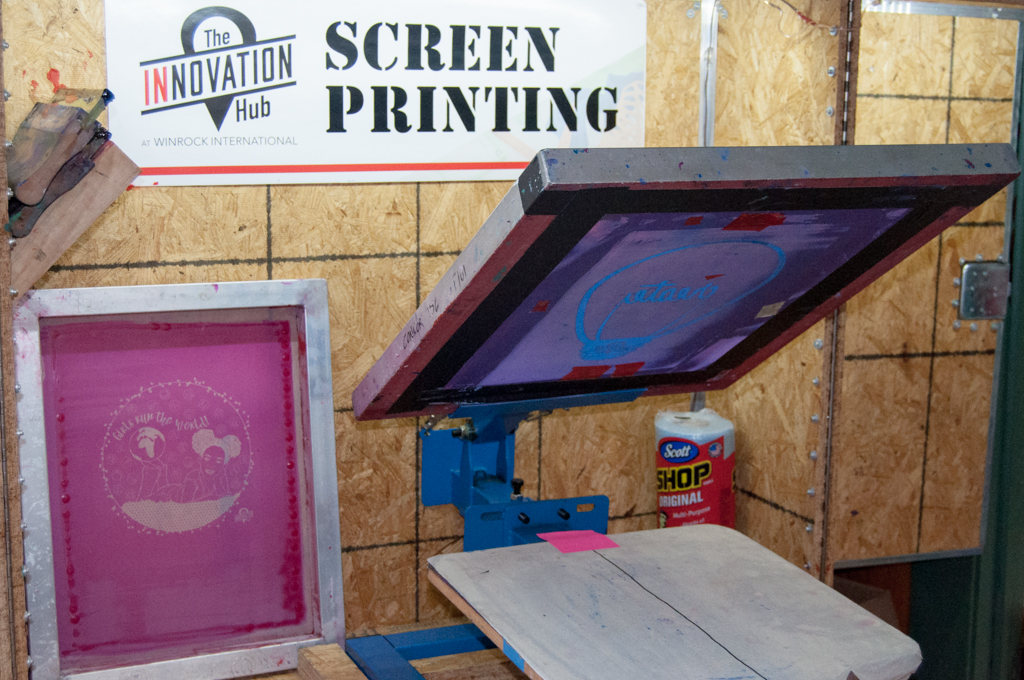 Screen printing allows users to create a design on plastic and print it on a shirt or a bag using heat. Photo By Antony Ramos.

Litokwa, a 14-year-old ninth-grader at the nearby Don Tyson School of Innovation, came to the make night with his aunt. “I came to check out the drones,” said Litokwa, whose family is Marshallese. In school, he’s enrolled in a three-year drone piloting class, which will culminate with his taking a test to become a certified drone pilot.

Drones, according to Dakoda Baker, an Air Force staff sergeant who interns with the Hub as a drone expert, are a gateway to the latest making technology. About the size of a salad plate, the small drones can take instructions to move forward and back, up and down using basic computer coding that beginners can learn. They can be built from scratch using 3D printing and computer numerical control (CNC) technology. 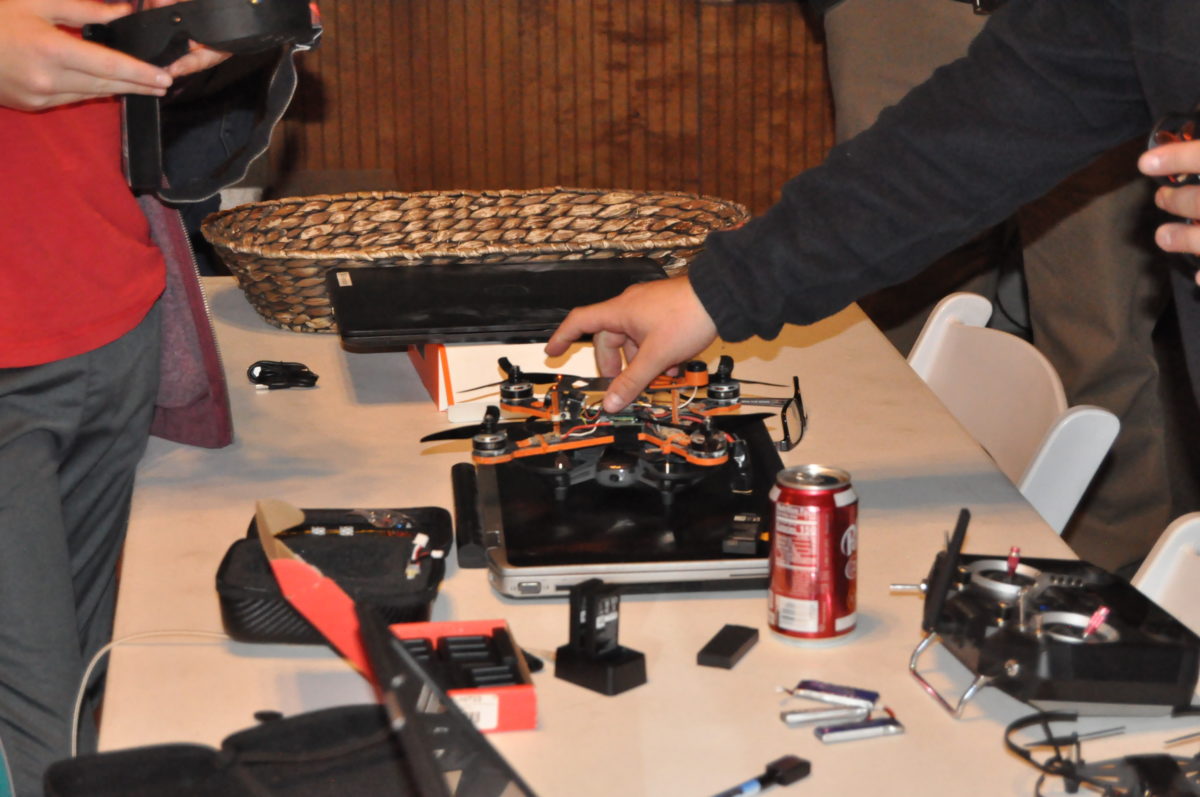 Drones can be a gateway to maker technology. They can be controlled by basic computer coding, and built from scratch using 3D printing and computer numerical control (CNC) technology. Photo By Antony Ramos.

Local residents Omar and Mary brought their two youngest sons, ages nine and five, multiple times to the popup while it was open. Omar is a videographer and audiovisual producer who wants to incorporate drones into his videography. Mary works in a factory and wants to learn graphic design and how to use Etsy as a selling platform. Through a translator, they described the effect the experience had on their children and them personally.

“Coming into this space is really sparking their creativity,” Omar said. Mary agreed. “They’ve been drawing and trying different things instead of being at the house and watching TV,” she said.

“Ever since the kids started coming into this space, they’ve been expressing dreams and goals,” Omar added, “saying, ‘I want to do this in the future.’”

He waited a second, then broke into a smile, “And us, too!” 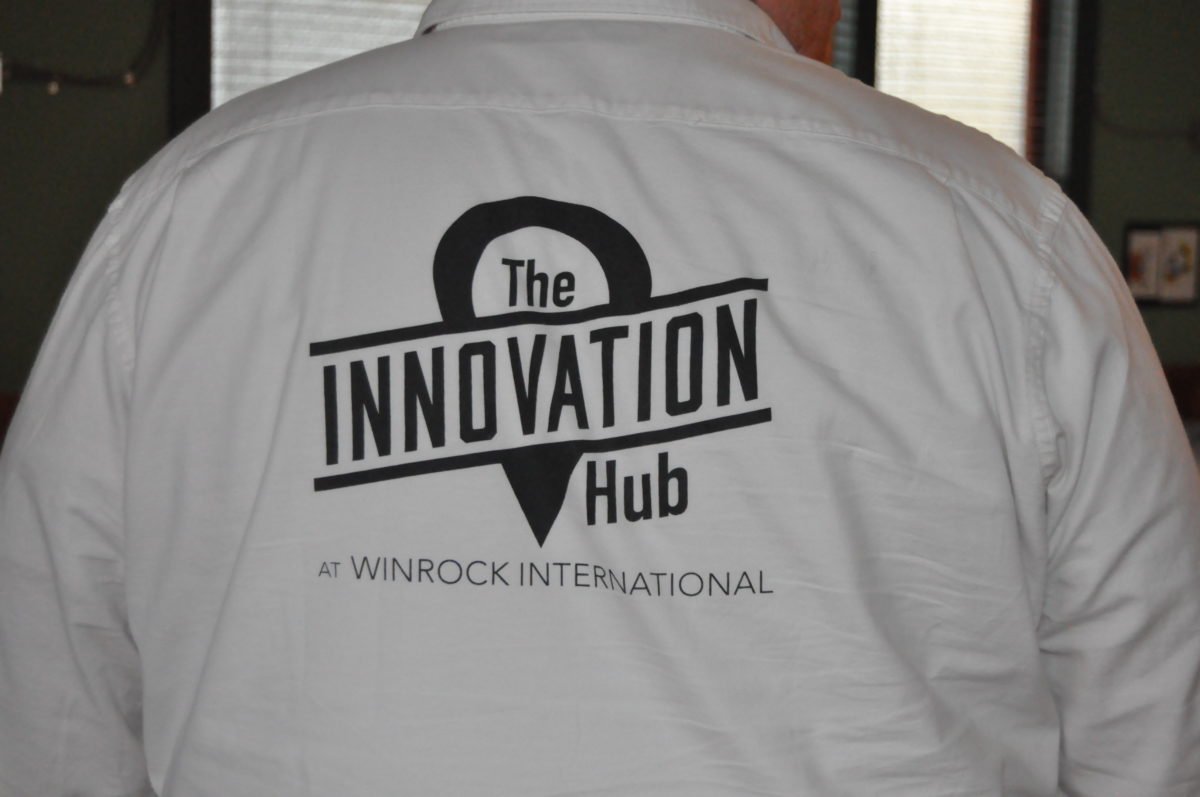