Mphangwe Station Manager demonstrating how audio is downloaded and edited on a computer with the Kagoro hub Radio Listening Club captains.

Tuning in to Rural Communities with Radio in Zambia

Shortly after midnight on August 1, 1981, MTV broadcast its first music video, the Buggles’ “Video Killed the Radio Star.” The choice of the song was a statement of purpose – television is ascendant, radio’s old news – in the same way the internet and social media later brashly elbowed their way into public consciousness.

But despite MTV’s provocative debut, radio’s never gone away – in fact, it’s almost more important than ever.

On World Radio Day, February 13, Winrock International joins the United Nations and partners around the globe to celebrate radio as a powerful communications tool for informing, engaging and empowering communities. Radio is an effective and low-cost way to reach diverse audiences regardless of socioeconomic class, education level, illiteracy, disability or the remoteness of a person’s home. These factors make radio uniquely effective for reaching rural communities.

“Radio,” according to the U.N., “is the mass medium reaching the widest audience in the world.”

Listen to the radio show intro in the local Chewa language.

“Although many new media technologies are available today, radio remains relevant and is especially important in our work,” says Winrock’s Julia Miller.

In rural Zambia, many children work in the labor force and 92 percent of them (mostly girls) toil on family farms. Winrock identified radio as the best method to engage rural communities in creating solutions by raising awareness of child labor and the importance of education. 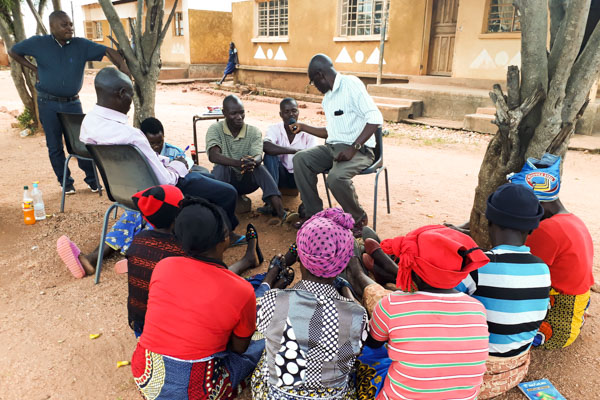 Mphangwe Radio at a community recording

Together with the local NGO Panos, Winrock partnered with four regional radio stations to broadcast interactive programming designed to equip communities to empower girls. The programs address the challenges of child labor and explore solutions to promote gender equality and increase access to education.

But access to radios in remote villages across a vast rural region remained a challenge. Men are more likely to own radios and to listen regularly, which makes radio an effective medium for changing hearts and minds to improve gender equality. However, women and girls are less likely to own or have access to a radio and their participation is essential to foster the community dialogue that creates change.

To address that issue, Winrock organized 20 community radio hubs. Together the hubs serve 40,000 households in more than 1,000 villages, so that people across rural Zambia have a place to tune in, talk and listen to each other.

Radio listening clubs, led by club captains, were organized for each community hub. Club captains received radios, voice recorders and training to record discussions and responses to broadcasts. Radio stations collaborate with club captains to respond to feedback on-air and incorporate community dialogue in the broadcast. Through this participatory program, the voice of a young girl, who doesn’t own or typically have access to a radio, can reach an entire region of Zambia.

With thoughtful programming and powerful partnerships, Winrock is using radio to spark dialogue that leads to real change. When communities are engaged in the co-creation of solutions, improvements are resilient and continue to grow long after programs come to an end.