The Couple Who Volunteers Together

On June 1st Mary and Bob Albrecht arrived in Guinea for their fifth joint volunteer trip with Winrock. This married couple has completed assignments together in Nigeria, Turkmenistan, and Guinea. Mary and Bob have volunteered separately in several other countries, but confess that they most enjoy working and training together. “It just works well for us,” says Mary. The Albrechts wrapped up their sessions in Coyah, Guinea this week. The assignments are part of Winrock’s Farmer to Farmer Program for Agriculture Education and Training. The Albrechts worked with the National Association of Poultry Farmers of Guinea (ANAVIG) and the National Union of Poultry Farmers of Guinea (UNAG.) END_OF_DOCUMENT_TOKEN_TO_BE_REPLACED

Fish and Mangoes in Southern Burma

Dr. Hugh Thomforde recently finished his three week assignment with Farmer-to-Farmer in Burma (also known as Myanmar), where he conducted workshops for 101 farmers in four townships on water quality monitoring for freshwater fish and prawn farmers. While writing his end-of-assignment report he reflected on his time there, noting: END_OF_DOCUMENT_TOKEN_TO_BE_REPLACED

This week’s blog comes from Farmer-to-Farmer volunteer Daniel Miller, with reflections after his return from an assignment in Burma (also known as Myanmar):

For those of you who have not visited Myanmar, you have missed a good opportunity. It is a major Buddhist center with pagodas and monasteries everywhere. The next to last worldwide Buddhist conference was held here about 200 years ago, and the agreements on what constitutes Buddhism were inscribed in 729 marble tablets and set up in small pagodas for generations to come. They probably will outlast the records of the more recent worldwide conference that were recorded on a hard drive. Another pagoda you will want to visit is one of the largest in the world in Yangon, the Shwe Dagon. Supposedly it was originally built by two merchants who talked with the Buddha on a trip to India. Some of Buddha’s hair relics are said to be buried there.

The world’s largest standing Buddha is in Myanmar and is quite impressive. There are a number of other famous pagodas that were built by former kings and are now maintained either by the government or by private donations. Another thing I saw was a wooden bridge across a lake that was built less than 200 years ago to facilitate commerce between the producers on one side of the lake and the consumers on the other side. It reduced the need for boat traffic and made things a lot easier.

Depending on your viewpoint, the best time to come is during the monsoon season when everything is growing and temperatures are cool or during the dry season when it is dry and hotter than a good Mexican chili, but there are no mosquitoes. And on top of that, there are festivals of some kind or other most of the time.

My USAID Farmer-to-Farmer assignments actually covered two areas. The first was to improve the level of management for a group of dairy farmers who were actually doing quite well given circumstances. As in almost every case I’ve seen, the biggest problem is nutrition of their animals. The second area was a group of goat raisers in the central part of Myanmar. Typically the only investment they made in their animals was to build a crude shelter for the rainy season and night time, nothing in the way of supplements or mineral salt. In the morning the goats went out to graze on whatever there was to eat coming back at midday and the evening. Salt and minerals would help a lot at little cost. The stockmen could also plant forage trees to improve the protein level of the goats’ diet. Another thing they should consider is to select based on udder conformation and size and number of kids born and weaned. Since the price of goat meat is almost as good as in the US, they should do well.
–Daniel K. Miller

This just in from volunteer Chantel Welch:

“In the past week I have seen some amazing work done by local farmers, people who attended relatively short trainings (generally 3-5 days), took the information that they were given and not walked, but ran with it. One group of friends started a monosex tilapia hatchery; they will soon supply neighboring farmers with high-demand stock. Another man created an improved aquaponic system using locally available materials and a combination of solar, electric, and foot pumps; prepared for any circumstance. He has spent the past year improving his system, adapting it for his unique circumstances, and is beginning to generate sales of fish and vegetables in his local community. This same man trained a group of people in a western coastal village on aquaponics – in their area vegetables are unavailable in the summer season and all fresh produce is trucked in from 8-10 hours away. Extension services at work. I spend more time now thinking back on my days in 4-H, marveling at the amazing cooperative extension service that we have in the United States, one that I took for granted as a young farmer-in-training.” 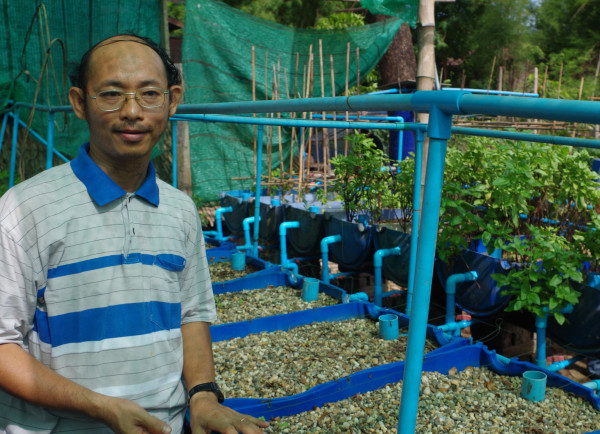 U Saw Hei Moo at his aquaponic farm near Yangon, Burma

A Great Opportunity to Help a Developing Country

Dr. Andrew Sanchez recently completed his Farmer-to-Farmer assignment with the Agriculture and Forestry University (AFU) in Nepal. Below, he reflects on his trip: END_OF_DOCUMENT_TOKEN_TO_BE_REPLACED