Motivated by his own past, CEO Rodney Ferguson has positioned Winrock International to offer solutions to the world’s most challenging problems

Long before Rodney Ferguson became President and CEO of Winrock International, he was keenly aware of how development work can transform lives. As a young boy growing up in small-town Alabama, Ferguson was surrounded by the benefits of one of history’s most successful development initiatives. “We had electricity because of the New Deal. We had agricultural self-sufficiency because of the New Deal,” he says. “And my family was literally saved by the New Deal because my grandfather received agricultural subsidies during the Depression and World War II that allowed him to farm and feed his family.”

Though he left Alabama after college, Ferguson’s career has been animated by those early personal experiences and the conviction that disadvantaged people can better their own lives when given the right mix of resources, knowledge and opportunity. Indeed, for over 20 years Ferguson worked with a long roster of universities and nonprofits – everyone from the State University of New York (SUNY) to the MacArthur Foundation and Pew Charitable Trusts – to develop and implement innovative ways to empower people around the world. 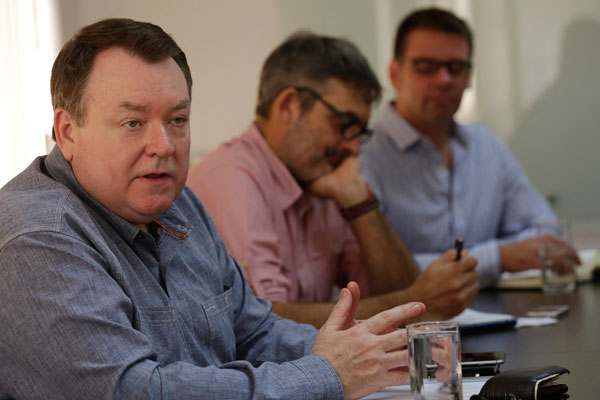 Since becoming CEO of Winrock in April 2013, Ferguson has continued that mission; setting the organization on a course to become the most impactful development force in the industry. Approaching nearly three years on the job, Ferguson recently sat down for a wide-ranging interview in his Arlington, Va., office. Surrounded by mementos and photos from his travels to Winrock projects around the globe, Ferguson shared his thoughts on why a rapidly evolving development landscape demands internal change, what he’s learned since becoming CEO and why Winrock is uniquely positioned to deliver solutions to many of the world’s biggest problems.