When women are empowered, families flourish.

Agriculture
Human & Social Capital
A Change of Chores, a Change of Heart
Bangladesh

“Men usually don’t clean the cow shed, but now I clean it. And if my wife is late in cooking I will help her chop vegetables.”

These are not words you typically hear from a Bangladeshi man, but Ashok Mandal has had a change of heart. His wife, Kanika Rani Mandal, recently participated in USAID’s Women’s Empowerment Activity (WEA) project, implemented by Winrock International, and she convinced Ashok there’s a better way to divide their chores. 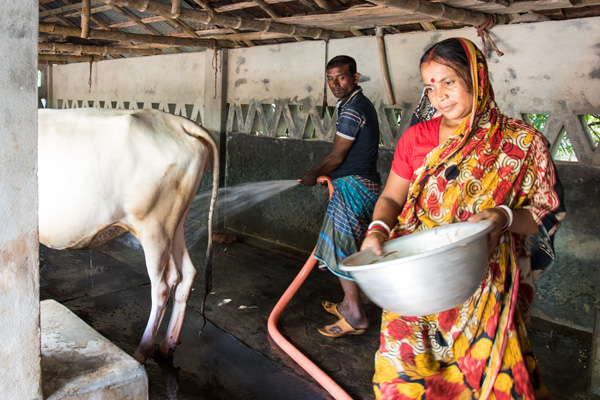 “I learned that husband and wife could work together,” says Kanika Rani Mandal. Her husband, Ashok, helps her care for their cows. Photos by Misty Keasler

The Mandal family lives in Sammandhakathi, a small village in the Jessore district of Bangladesh. Here, women traditionally care for children, house, garden and livestock while men eke out a living from farming, hauling, selling wood or other occupations. 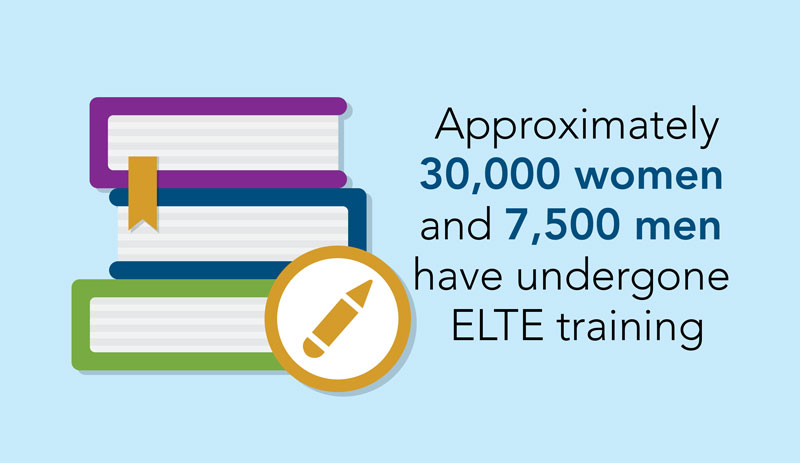 “I took the seven-month class and I learned that husband and wife could work together,” Kanika says, referring to WEA’s Entrepreneurial Literacy Training for Empowerment (ELTE) class, which is two hours a day, five days a week for seven months. Approximately 30,000 women and 7,500 men have undergone ELTE training, which is part of WEA’s larger effort that supports 1,350 communities in five districts of Bangladesh. 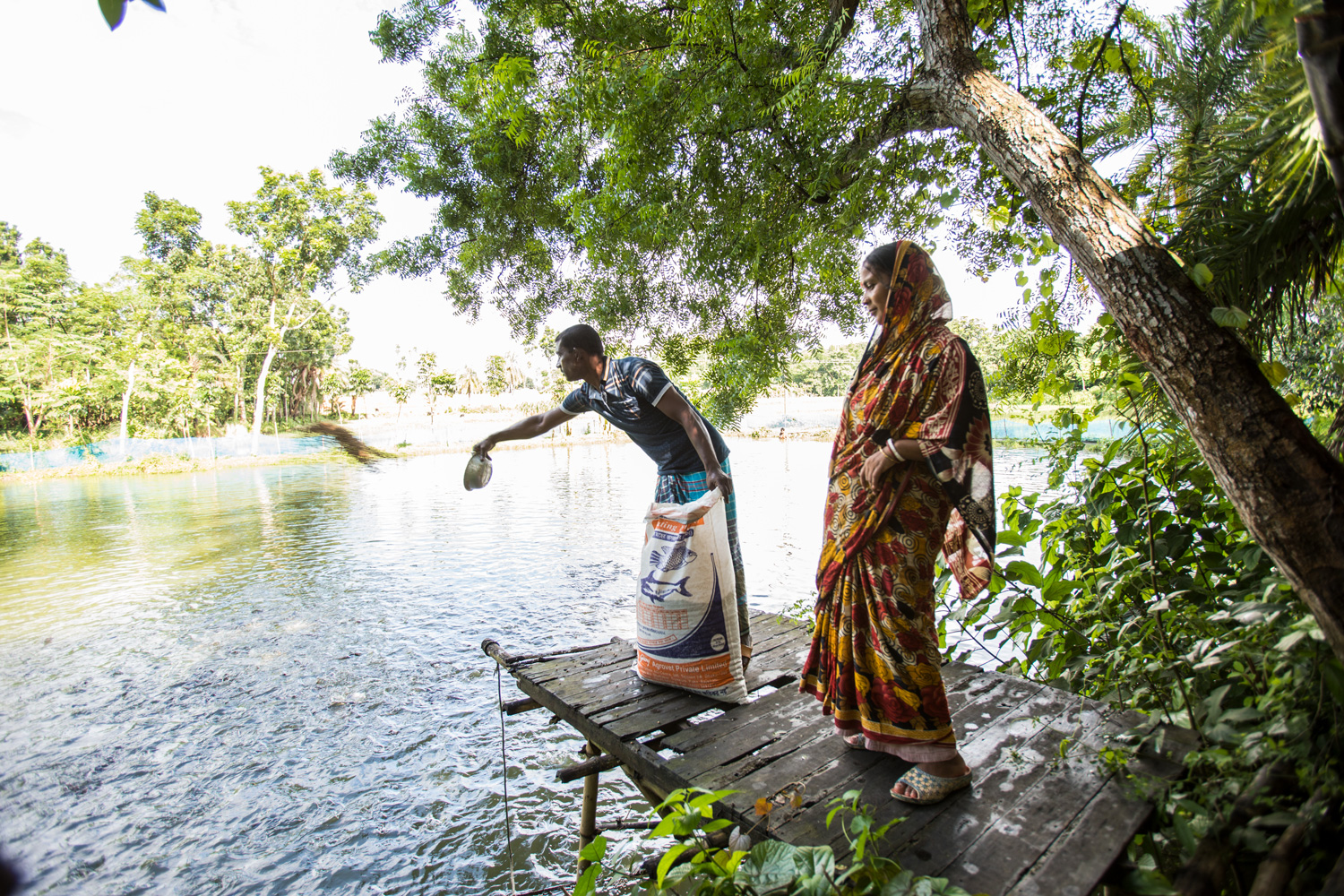 Kanika and Ashok feed their fish.

After the seven-month ELTE class, Kanika received additional training in raising livestock, and she discussed what she learned with her husband. As the couple realized the additional income potential of what is often considered women’s work, they also saw the value of teaming up for chores. Now Kanika is not the only one cutting the straw for the cows. Ashok cuts it, too. And when it’s time to feed the fish, Ashok and Kanika feed them together. 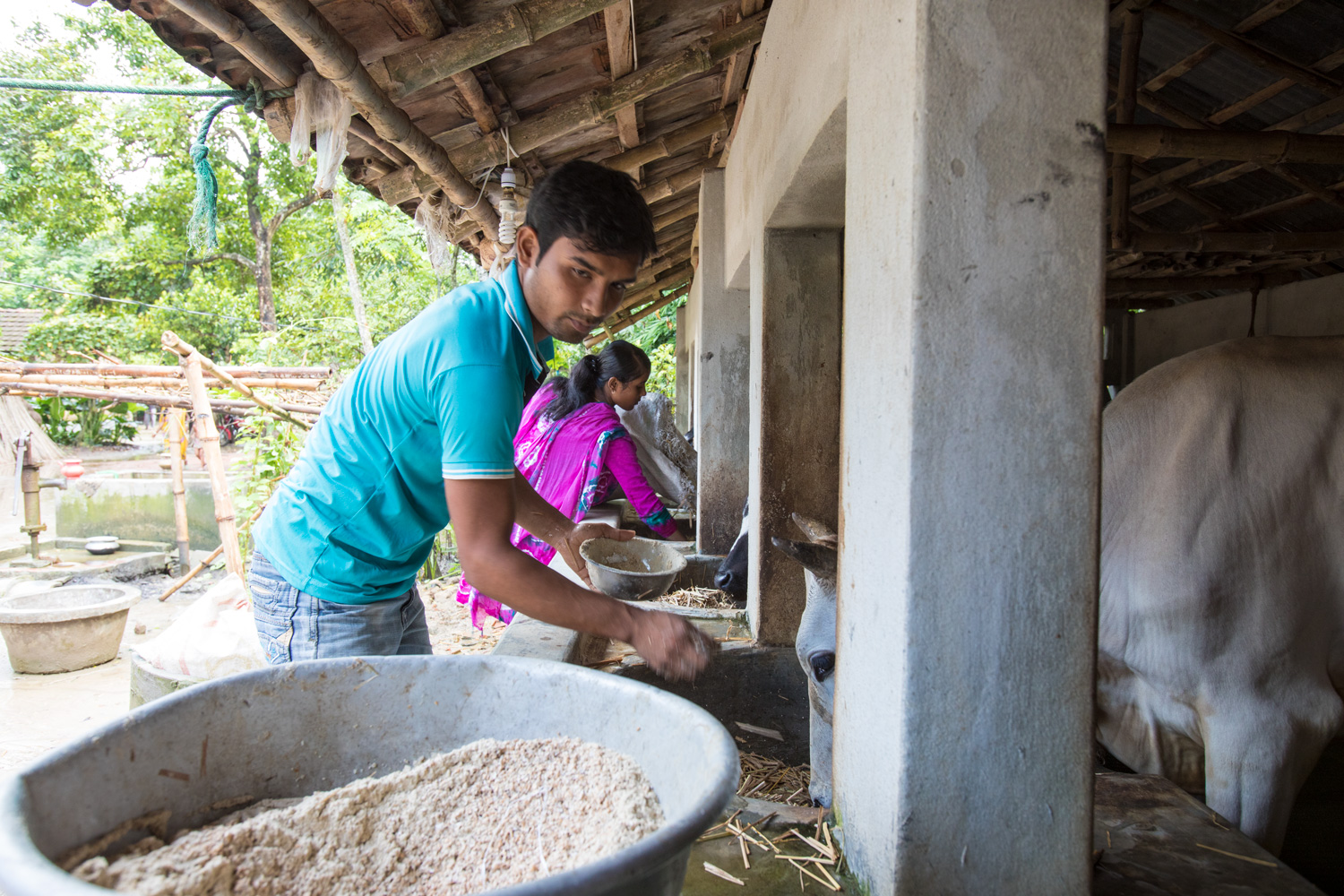 These changes extend to their children, too. Daughter Shanta helps her father wash the votvoti, a shallow, motorized vehicle that he uses to sell wood and earn money for the family. Son Polash helps his sister feed and milk the cows. 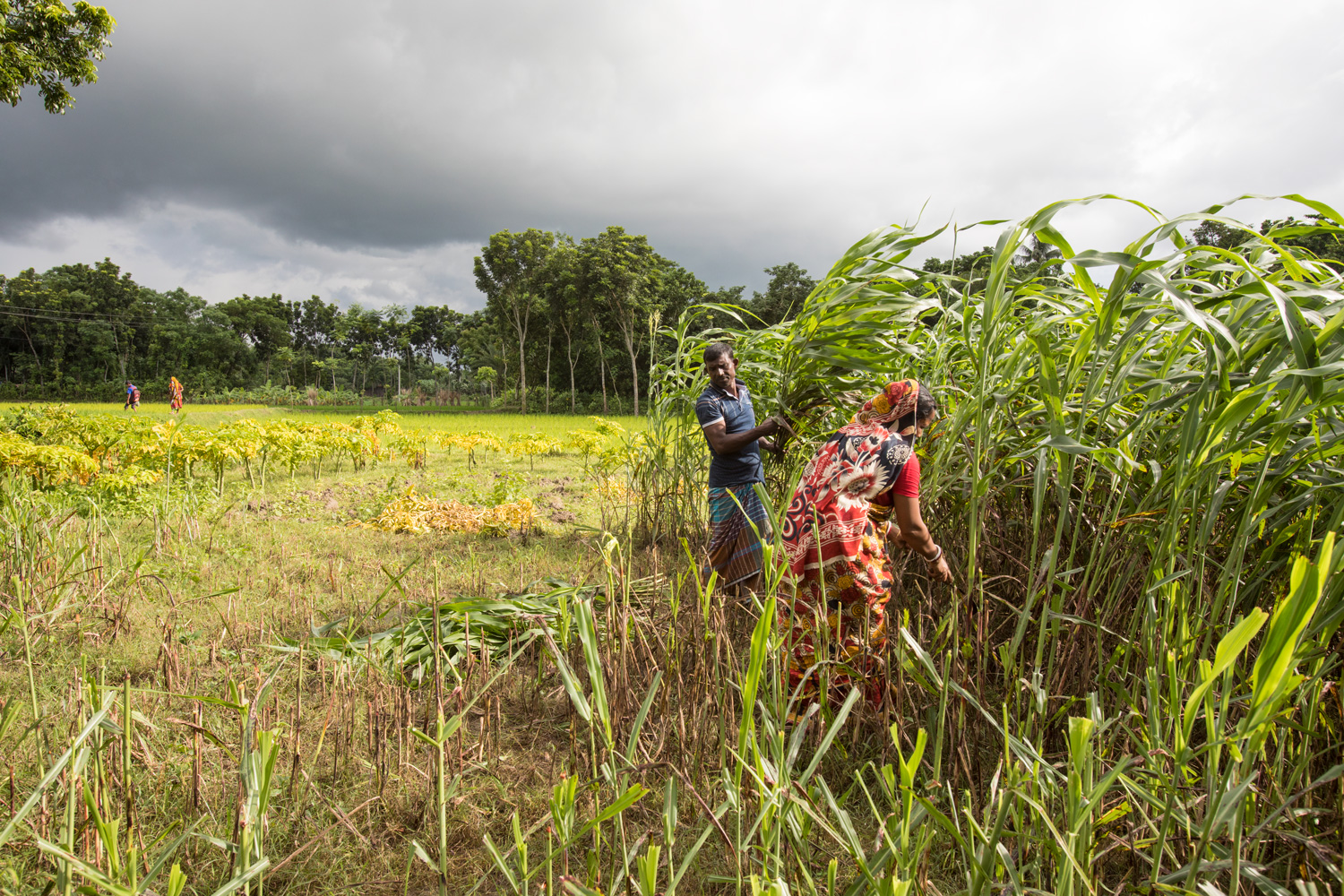 Kanika helps Ashok in the field.

Since Kanika and Ashok started working together, the Mandals have been able to save and invest more of their earnings. The family recently built a new cow shed and have five cows now instead of one. “The income we get from cows, we invest in our fish pond. I also spend money on my children’s education,” Kanika says. “I don’t want to marry my daughter off. I would like to train both my son and my daughter for jobs.”

By sharing chores with her husband, Kanika has more leisure time, too. “Usually at night I don’t do any work, but when I get help from my husband I get some time at midday, too.” 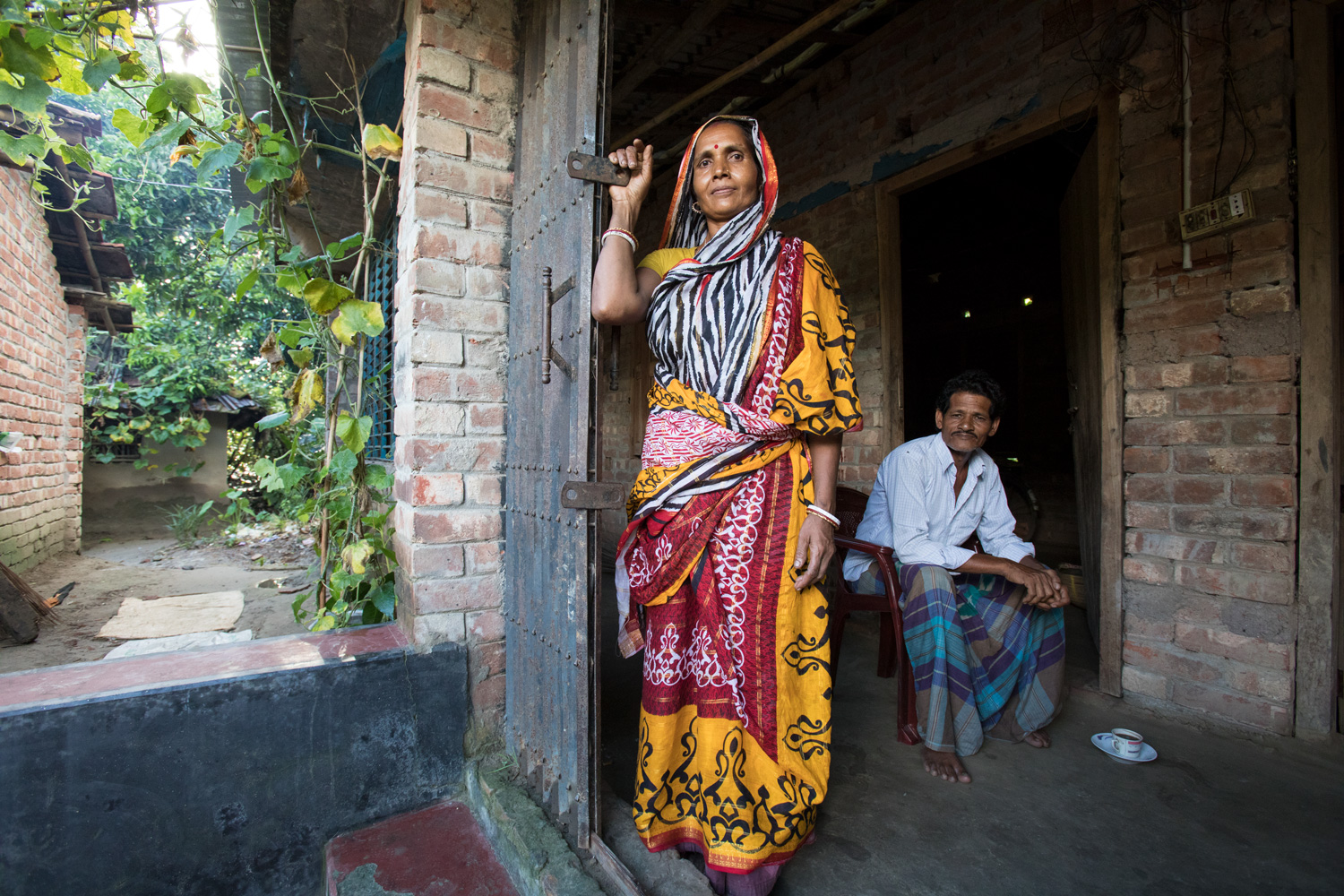 Only a few steps away from the Mandal’s house live Radha Rani and her husband Mrittunjoy Sarder. Radha did not take the ELTE classes. Their 14-year-old daughter is already married. Radha cooks, cleans, does laundry, harvests vegetables and feeds the cows three times a day.

When asked what he does, Mrittunjoy says, “I work in the field, planting chili plants.” 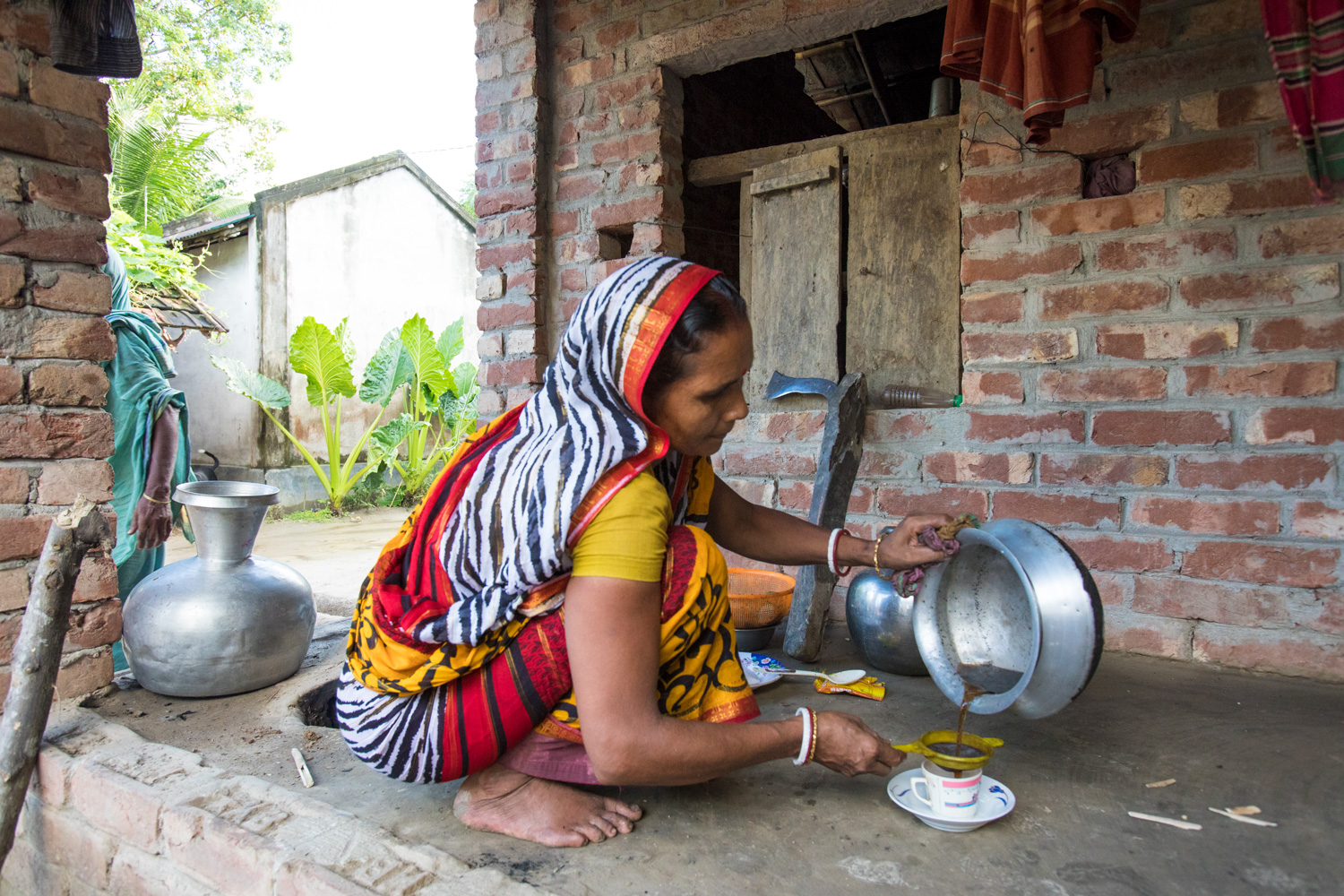 Radha elaborates: “He never takes a glass of water for himself. If I left the home today he would not cook or eat.”

Mrittunjoy says his wife is so competent that there’s no need for him to cook or clean. “She can do everything,” he says, smiling. 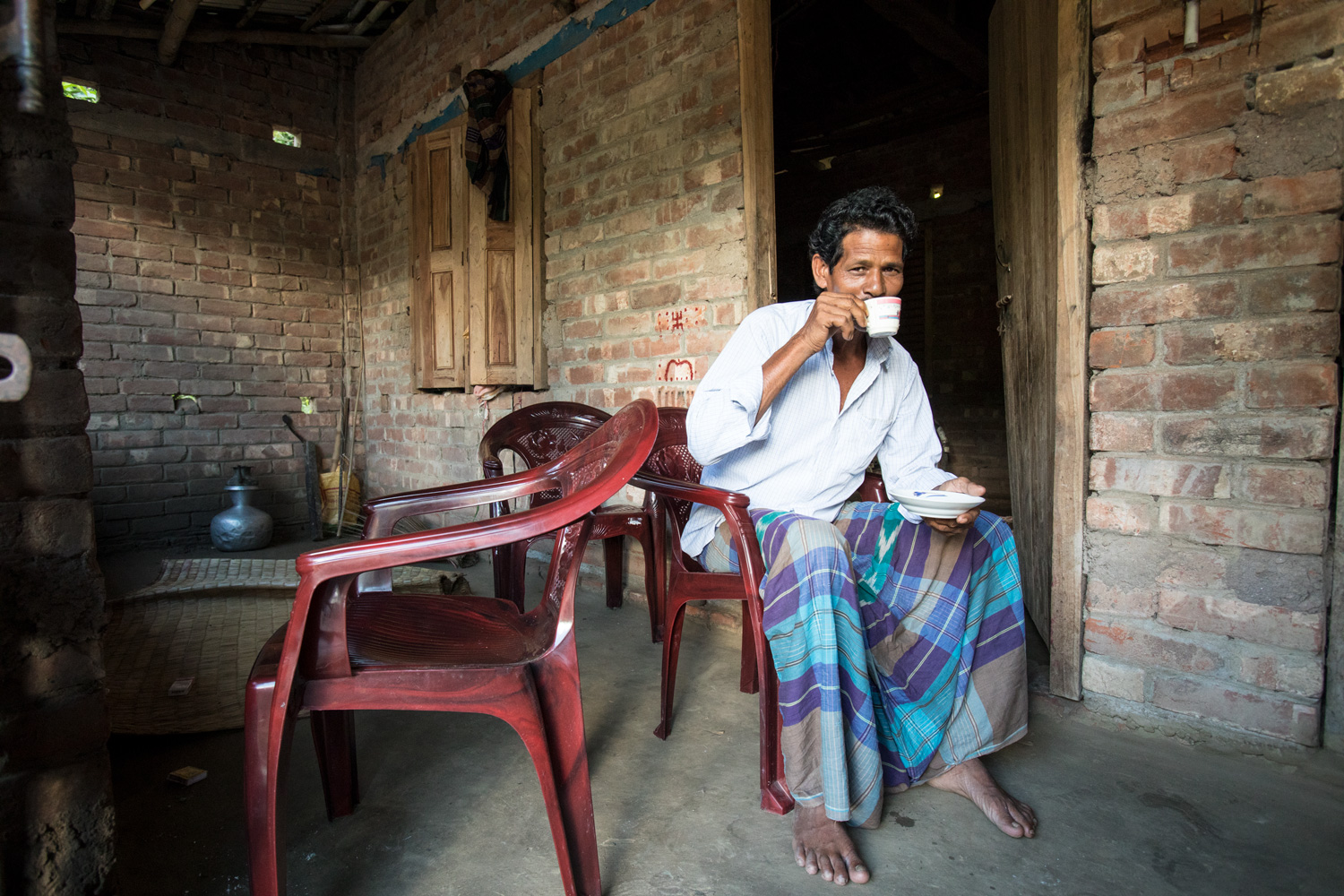 … and her husband, Mrittunjoy, drinks it.

Radha says she knows the Mandal family and is aware of the changes they’ve made, but she doesn’t think these changes would work for her. “My husband cannot share,” she says.

The Mandals’ example has inspired many other neighbors, though. “We always see them working together,” says Nurjahan Begum, who lives next door to the Mandals. “At first, they had only one cow, but then he started helping her and now they have more.” 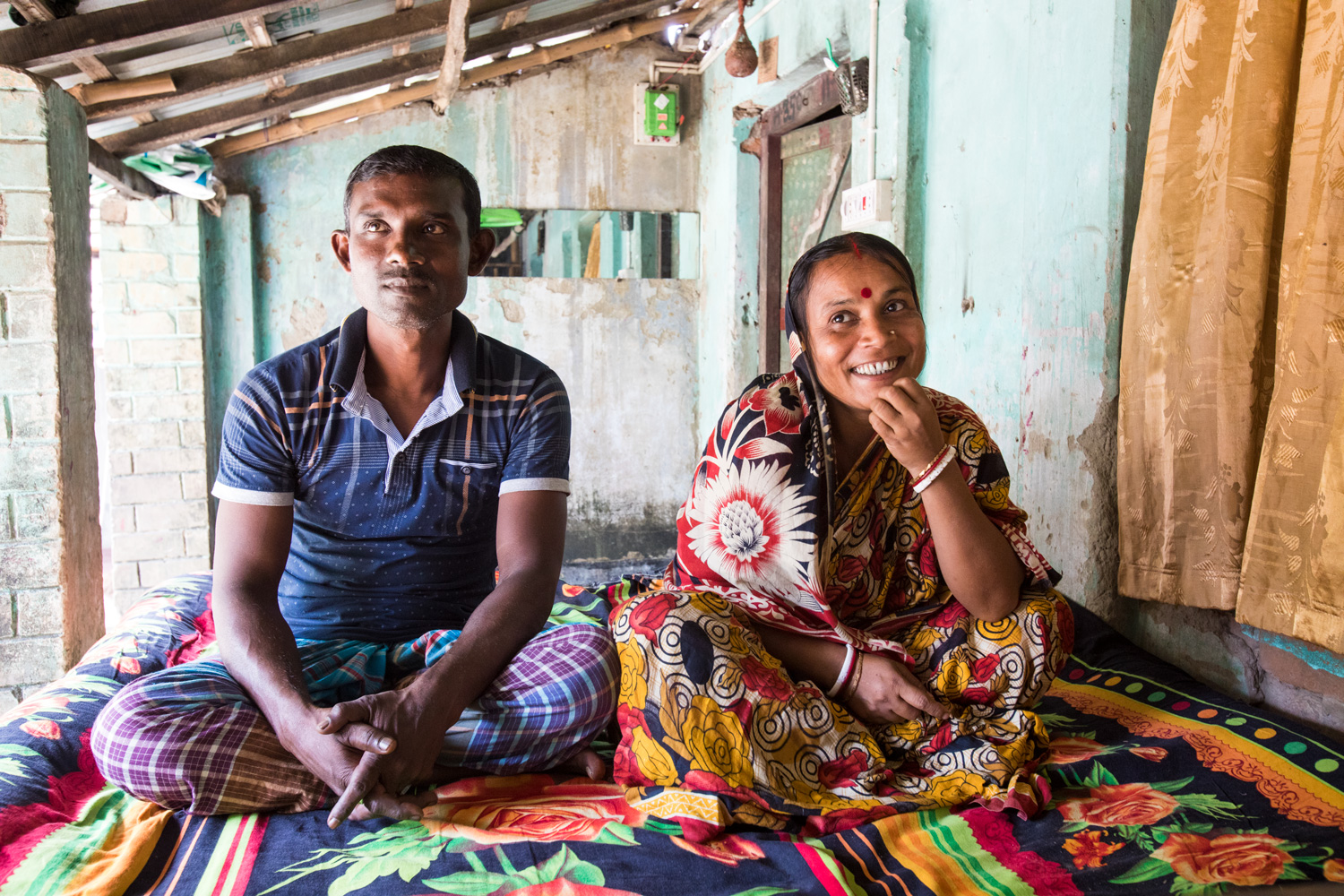 Ashok and Kanika at their home in Sammandhakathi, Jessore, Bangladesh.

Kanika and Ashok realize there’s a learning curve. “I tried to make the bread, but it isn’t in the right shape, so my wife is laughing at me,” Ashok says, as Kanika looks at him, grinning. But a misshapen loaf is nothing compared with the benefits of sharing chores.

“Our only dream is that our children get an education and get jobs,” Kanika says. With more money for school fees, and a prospering household, it seems like that just might happen.