An Early Adopter in Myanmar

Second in a series

It was 2016 and Myanmar’s second annual National Cupping Competition was about to begin. It would be held at the country’s first (and, at the time, only) coffee cupping laboratory, located in a room beneath the new coffee mill at the Mandalay Coffee Group’s (MCG’s) headquarters in Pyin Oo Lwin. 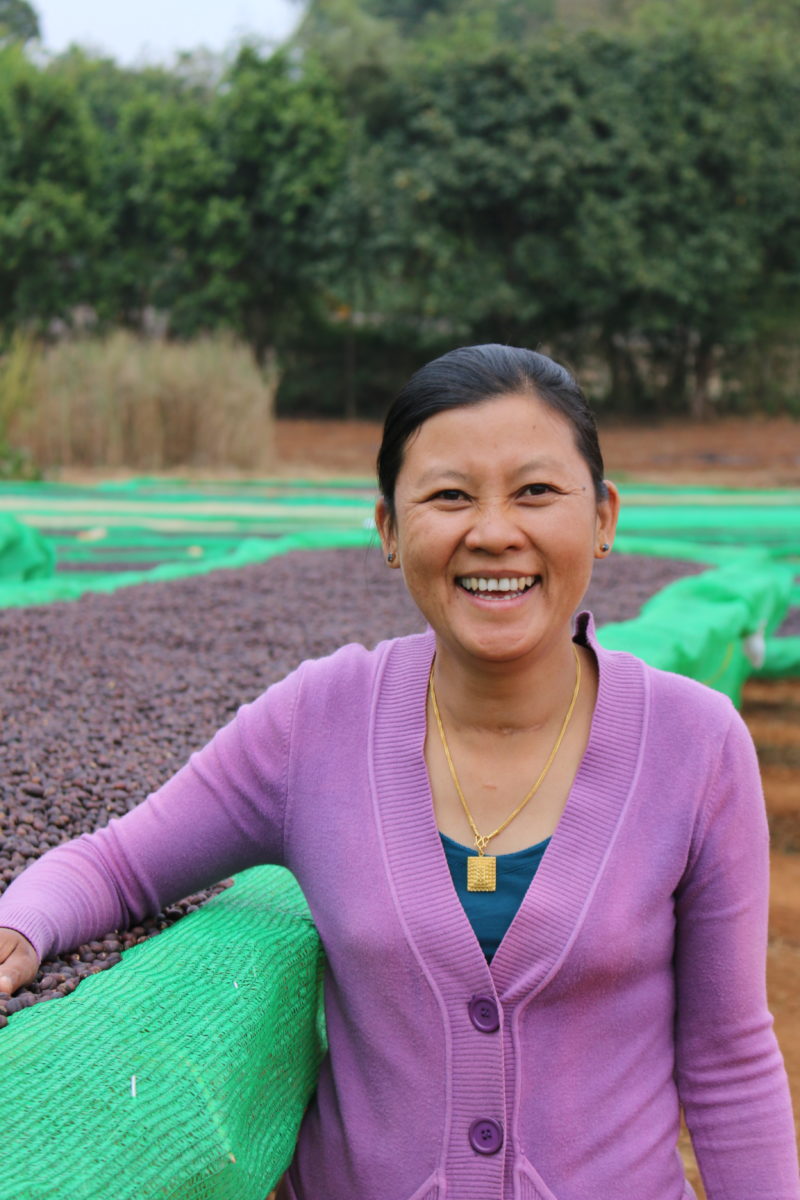 An early private sector partner of USAID’s Value Chains for Rural Development project, implemented by Winrock International, MCG had obtained and installed equipment for the lab and mill with funding through one of the first of nine Innovation Fund grants issued by the project, which ended in December 2019 after five years of support to coffee, ginger, soy, melon and sesame farmers. The project helped approximately 40,000 smallholder farmers and other market system stakeholders improve product quality, penetrate new markets, and sustainably increase agriculture investments and incomes.

For the competition, growers submitted nearly 60 samples of their finest “green” (unroasted) Arabica to the Myanmar Coffee Association, eager for the chance to have their coffee graded, roasted, brewed and assessed by experts from the U.S.-based Coffee Quality Institute (CQI). Top scorers would not only gain bragging rights, but would also achieve an overnight marketing coup, winning the ability to promote their coffees in high-paying specialty export markets as “the best” from a previously unknown specialty coffee origin. All farmers who submitted samples were invited by MCA and Winrock to attend the judging, learn about coffee evaluation, and chat about specialty coffee trends and prices with the three respected judges. But only one farmer showed up: a young trader from Ywangan Township in Shan State named Su Su Aung. As usual, “Ma Su Su” as she is known, was one step ahead of the crowd.

Though she spoke only a little English, she made the 175-kilometer drive over the mountains from her village to see the samples (including a couple she submitted) graded and cupped with her own eyes, and to learn about the connection between cupping scores, marketing and pricing. While thousands of other coffee farmers in Myanmar would make the shift over the next few years from low-grade, low-value commodity coffee to carefully cultivated and processed, “specialty” coffee priced by quality, Ma Su Su was among the first to embrace this systemic market shift. 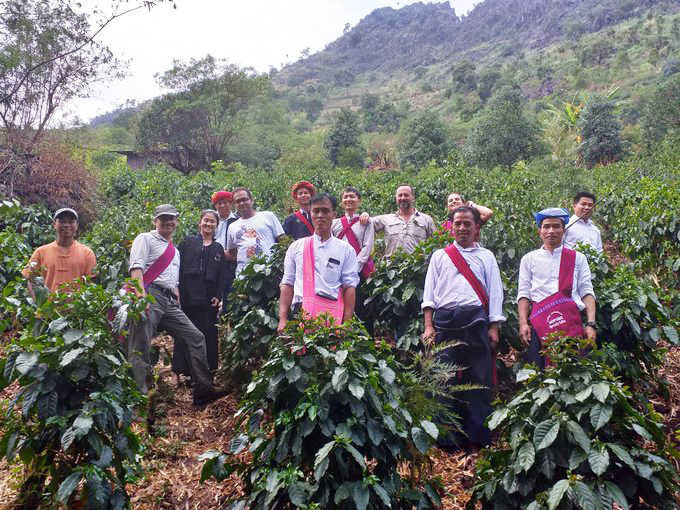 Members of the Indigo Mountain Coffee Company, which was able to make up-front payments to coffee farmers.

Her coffee scored well enough in the 2016 contest to attract attention from international specialty coffee buyers, including the green coffee buyer for U.S.-based Whole Foods Market. Those first global customers were eager to establish connections with — and offer quality-based price premiums to — producers like Ma Su Su, who were beginning to learn how to grow and process specialty-grade coffee in Myanmar, a nation just emerging from decades of isolation.

Ma Su Su sensed a bigger opportunity; not just for herself and local farmers, but for Myanmar and its gradually awakening coffee sector, including growers, traders, processors and retailers.

She and members of the social enterprise she had recently started, Amayar Women’s Coffee Producers Group, began attending trainings on production, harvesting, processing and cuppings organized by the Value Chains project with local partners like the Myanmar Coffee Association and MCG. Technical guidance on improved production and processing practices, along with market development strategy, was designed with help from CQI, a key partner with vast expertise and a stellar network across the global specialty coffee industry. Local trainers from community self-help groups assisted farmers like those in Ma Su Su’s group, and dozens of others, as they tested and adopted practices including natural composting, pruning, balancing light and shade, selectively harvesting ripe, red coffee cherries, measuring moisture while sun-drying cherries on raised tables, tracking and tracing lots, and improved storage. These and other improvements could turn an unremarkable batch of cherries into a potentially high-value lot capable of competing in the specialty market and attracting price premiums, helping coffee farmers increase incomes. 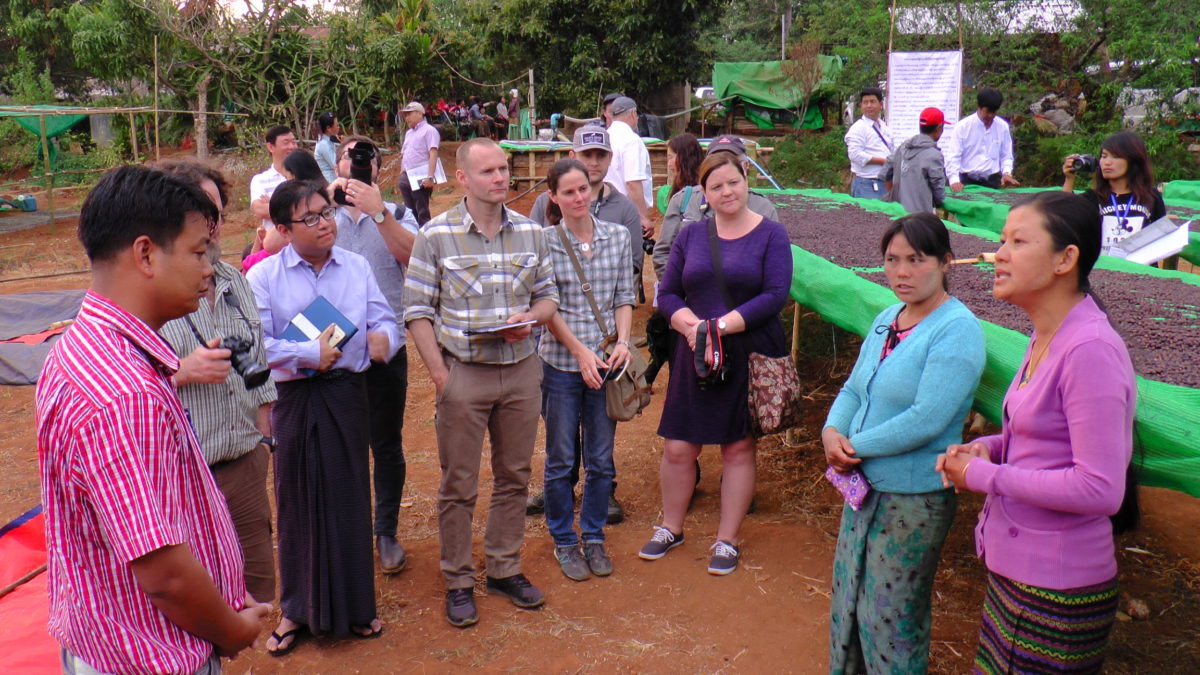 Su Su Aung, right, explains her coffee to buyers in 2016.

As these and other changes adopted by Ma Su Su and other farmers took root, and as a growing cadre of “relationship coffee” buyers — those interested in equitable and long-term relationships with coffee producing communities — returned for subsequent harvests, word spread. Soon, farmers in other areas began showing interest.

One of those groups was located east of Ma Su Su’s hometown in Ywangan, in Hopong Township, a place known more for illicit poppy production than coffee cultivation. There, a group of dedicated coffee farmers heard about Ywangan’s market successes and went to see for themselves. Impressed, they decided to adopt Ywangan’s high-quality production model. They produced a small amount of high-quality coffee in 2017 and succeeded in exporting it to a Netherlands-based buyer called This Side Up.

Excited by this market breakthrough, the Hopong group followed up their inaugural season with additional exports in 2018, selling again to This Side Up as well as to an Australia-based importer and newly interested domestic roasters. These sales galvanized and convinced the group to expand, form a new company, Indigo Mountain Coffee Co., and apply for a grant. Funds from the grant enabled Indigo Mountain to establish and manage additional community coffee processing stations, make up-front payments to farmers for their best cherries, and purchase and equip a new cupping lab to help local farmers measure and control quality, right in their own backyards. 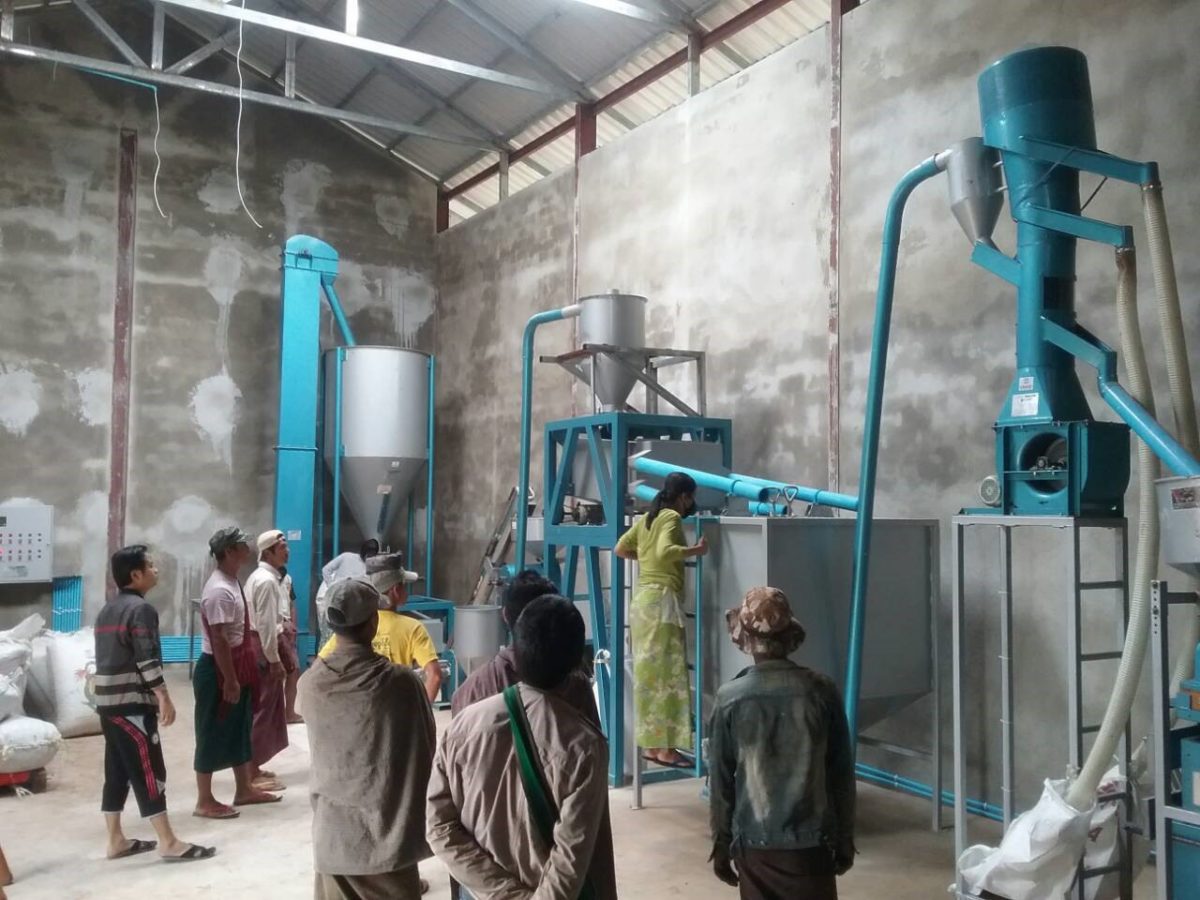 Since then, the specialty coffee landscape in Myanmar has transformed, with growing investment and involvement from the private sector and help from early adopters like Ma Su Su, who obtained an Innovation Fund grant that enabled her, through co-investment, to expand and start a successful coffee milling operation in rural Ywangan. She now processes an ever-increasing volume of award-winning specialty coffee for clients including Indigo Mountain and other local producer groups, who have benefited from her expertise and solid connections to high-end buyers. In addition to the MCG and Amayar coffee mills, another small coffee production and processing enterprise that partnered with the Value Chains project, Behind the Leaf, has sprouted in a neighboring Shan community and is successfully milling and selling its finest coffees at premium prices.

Ma Su Su, in the meantime, continues to blaze trails. She became a founding member of the Myanmar chapter of the International Women’s Coffee Alliance, which is now collaborating with the Myanmar Coffee Association to promote Myanmar coffee at business-to-business and international trade events. Her women’s group is engaging a growing number of women entrepreneurs, offering access to job opportunities not only in coffee but in production of other local specialty products and crafts; the inspirational group has also been featured in a film by USAID.

“I hope there will be more women in leadership positions in coffee,” Ma Su Su said. “Growers need to know that good prices will come with good coffee, if the quality is there.”