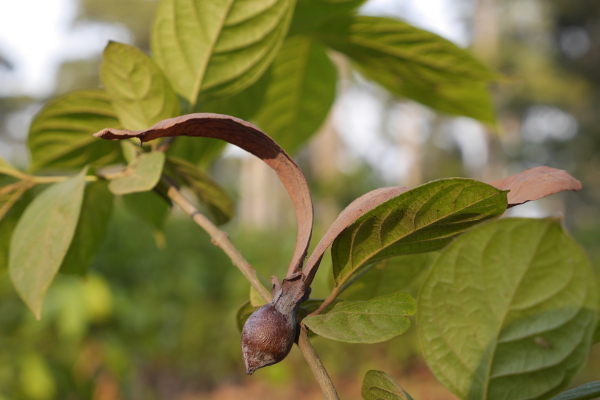 An example of a Garjan tree seed.

In some of the last remnants of tropical forest north of Cox’s Bazar in the southeastern corner of Bangladesh, the Government of Bangladesh declared two protected areas: Fashiakhali Wildlife Sanctuary and Medakacchapia National Park. Established in 2007 and 2004, respectively, these protected areas together preserve nearly 1,700 hectares of forest area. However, even with protected-area status, the forests have become degraded due to population pressure, illegal felling, encroachment and erosion.

One distinctive feature of the forests in these two areas is the extensive stands of Garjan trees, which reach heights of 30 to 40 meters. Garjan trees — once widespread in eastern Bangladesh — present a striking image with their tall straight trunks and umbrella-like canopy, but the mid-story (middle canopy) is missing. Upon closer inspection, it is clear that these forests are ecologically unbalanced and under threat. There is no natural regeneration and a limited under-story, leaving the forest floor vulnerable to erosion and upsetting soil fertility and moisture levels, which are necessary for Garjan seed germination. The situation has been aggravated further by pre-monsoon droughts that may be influenced by climate variability.

With support from the Winrock-implemented Climate Resilient Ecosystems and Livelihoods (CREL) project, locals have taken action to support the growth and germination of these trees and worked to restore biodiversity. Two thousand school children, the Co-management Committee, and the Forest Department’s North Division for Cox’s Bazar participated in the campaign to promote planting and regeneration in Garjan forest areas. A gathering on June 2, 2014, started the initiative, bringing together Village Conservation Forums, the People’s Forum, the Co-management Committee, the Assistant Commissioner (Land), and Forest Department officials. The school children planted 84,375 seeds on 11.2 hectares of forest area in two weeks, with support and direction from the Co-management Committee, instilling the children with sense of “ownership” of the forest, as well as a heightened appreciation for the importance of biodiversity and the effects of climate change. The children have pledged to help protect the seedlings as they germinate and, when the children grow up, they hope to enjoy the shade of a forest that they planted.

This pioneering effort is an example of how the USAID-funded CREL project is working to improve and sustain collaborative co-management of biologically significant areas of Bangladesh, by bringing together different stakeholders to better protect and manage natural resources.