Blog: The Conference of the Parties in Paris — A Bird’s-Eye View

Paris is the City of Light, and of love. And of a dozen TV shows in prime time where panelists argue about books. Seriously — a dozen. Paris just faced one of its most momentous challenges to French culture and values in the coordinated attacks on cafes and a soccer stadium and a concert hall. Now it is under assault again — by 40,000 delegates from 195 countries — which include not only country leaders and diplomats, but representatives from advocacy groups, the private sector and analytic experts all attempting to find just barely enough common ground to fill, say, 20 pages of agreed-upon framework text. Everyone seems to feel that politically, this could be the best, maybe last near-term opportunity to achieve consensus on an overarching climate agreement that could slow the rate of greenhouse emissions into the atmosphere.

Getting 200 countries to agree on anything is a really big deal. 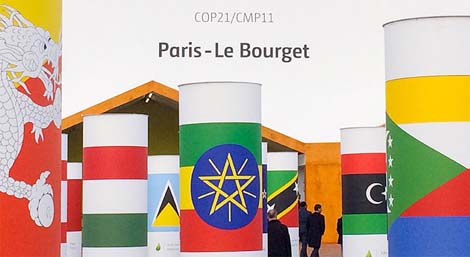 It’s pewter gray yet again today, Thursday, with rolling columns of cumulous clouds sweeping serenely by the Eiffel Tower out my hotel window. The flight over featured many climate change negotiators, experts, and NGO advocates trying to sleep and get organized for a huge policy event – the annual Conference of the Parties (COP) to the Framework Convention on Climate Change (UNFCCC). This moment is now almost 25 years in the making counting back to the start of the 1992 climate negotiations in Rio de Janeiro.

My seatmate on the flight over was a rep from the American Petroleum Institute, who is attending for the first time, and who didn’t quite seem to grasp what the event is all about (this is my 12th since the late 1990s). This is excusable, since a COP is a cross between an operatic Italian circus (Wow! Bam! Are you kiddin’ me?), a Fuller Brush salesmen’s convention (endless snooze), and a deadly serious United Nations negotiation on a Big Issue of Supreme Import — climate change.

Everyone hopes only for a framework agreement — the big picture global deal on only a few topics. To simplify, the key issues are: who has commitments to reduce emissions? (Now every country.); how will countries define their contributions to emissions reductions? (Basically, by proposing a set of activities and seeking funding for them.); how much funding will be made available to less-prosperous countries in the southern hemisphere by wealthier nations in the north?; how will voluntary pledges be measured and monitored?; and how will the need to address the impacts of climate change on developing countries (like sea level rise) be addressed and funded?

If an agreement is reached here, there will be, probably, three to five years of consolidating details as the difficult, intertwined decisions of how to operationalize whatever is agreed-upon is hammered out — like a brass cauldron in the metal alloy of old Paris.

A real challenge is knowing roughly what’s going on in the big game at the COP negotiations proper. There are about four games going on at any COP.  First, the formal U.N.-style negotiations in vast rooms with thousands of credentialed delegates from the 195 represented countries. The rooms are filled with long tables of delegations arranged alphabetically and monitoring the translations of the proceedings in any of the five officially designated U.N. languages. These meetings generally follow a formal, decorous U.N.-speak-laden diplomatic process, where the leader of a delegation, flag raised, waits for a turn to speak briefly, if not on the agenda. The meeting areas, press rooms, food courts and hallways surrounding the major meeting rooms are swarming with thousands of delegates not in the rooms and needing to chat or hash out an issue in private. Meanwhile, NGO experts and advocates wait to hear what went on in the key rooms and to lobby delegates and environmental advocates while media hover about, trying to figure out the storyline of a complex, organic process.

Second, there are the formal COP-area “side events,” where a country or group of experts or institutes have applied and been accepted by the UNFCCC to present their views in smaller venues. Third are the less formal side events outside of the main COP venue which proliferate wherever someone has cleverly found a location with drinks and enough room to attract a crowd. These include dinners, press events releasing a new report’s findings, or celebrating how well — or poorly — the last year went from a given viewpoint.

As usual for a COP, some big announcements have been made by major countries.  On the opening day Norway, Germany and the U.K. pledged $1 billion per year for five years up to 2020 —5 billion dollars — as a commitment to get the global system of performance-based payments for reducing deforestation and forest degradation and tree planting (called REDD+ in COP-speak) in tropical countries. Winrock’s Environment Group (FNRM and ECO) has several major AID projects, as well as a half dozen or more shorter method development and assistance projects (mostly with World Bank funds), underway supporting REDD+ countries. The U.S. pledged $248 million in new assistance on climate change, which appears to be largely focused on the energy sector.

But the real work is working with developing countries to provide assistance of all kinds so that they can fully participate in the process, in the financial and technical mechanisms that have emerged from the UNFCCC over the years (e.g., the Clean development Mechanism — which drove Winrock’s and many others’ work creating pilot projects, methods etc. — indirectly spawning Winrock’s American Carbon Registry, which at the domestic, state level records emissions-reductions trades from such projects in the California market).

Many countries have formally submitted their proposed contributions to reduce emissions starting in 2020. These “INDCs” (Are you ready? This means “Intended Nationally Determined Contributions” in COP-speak…) are very crude proposals on how they would reform their energy, agriculture, forest, transport and other sectors. These are probably going to be the first-order game plans for everyone supporting them — including Winrock — to try to figure out how to help, what needs to be done, how much it would cost, and how many metric tonnes of emissions reductions the activities would generate if funded and implemented. Figuring out how to implement them is the crux of the matter.

The Winrock delegation — Bob O’Sullivan of ENV Group, Brian Bean the Chief of Party for the FNRM LEAF project in Southeast Asia, and I — are primarily focused on speaking on or organizing panels in side events to share early lessons learned; gauging the level of interest in supporting potential activities by the range of donors here; and brainstorming with developing countries on what they need, to find the next set of major activities for us over the years ahead.

But right now, I’d better leave the COP mammoth set of temporary tents and buildings erected on the old Le Bourget airfield where Charles Lindbergh landed in the Spirit of St. Louis after the first solo flight across the Atlantic… and try to find a little brasserie still open for late dinner and a cheese plate for dessert…