February is Black History Month, and the commemoration feels different than in years past — more urgent, more vital. We at Winrock, like many of our colleagues and partners in the nonprofit sector, are reexamining our own commitments of ending systemic racism and promoting diversity. As an organization our origins go back to 1953 with the founding of the Agricultural Development Council (A/D/C), which brought young scholars from Asia to the United States to continue their academic training. The imperative of equality was a driver of that program. Through countless other programs both in the United States and around the world, we have continued to address issues of economic, social and educational inequality. We have a history that can inform our work today much as it inspired our colleagues from decades past.

Much of that inspiration originates with our founding family, the Rockefellers. The family’s contributions to racial equality are vast and far too lengthy to list here. The founding of Spelman College in Atlanta to provide African-American women equal educational opportunities. The Rockefeller Foundation’s efforts to eradicate hookworm – a disease that disproportionately affected rural African Americans in the Deep South in the early 20th century. Efforts to support activists during the civil rights movements of the 1950s and 1960s. The list is exhaustive. 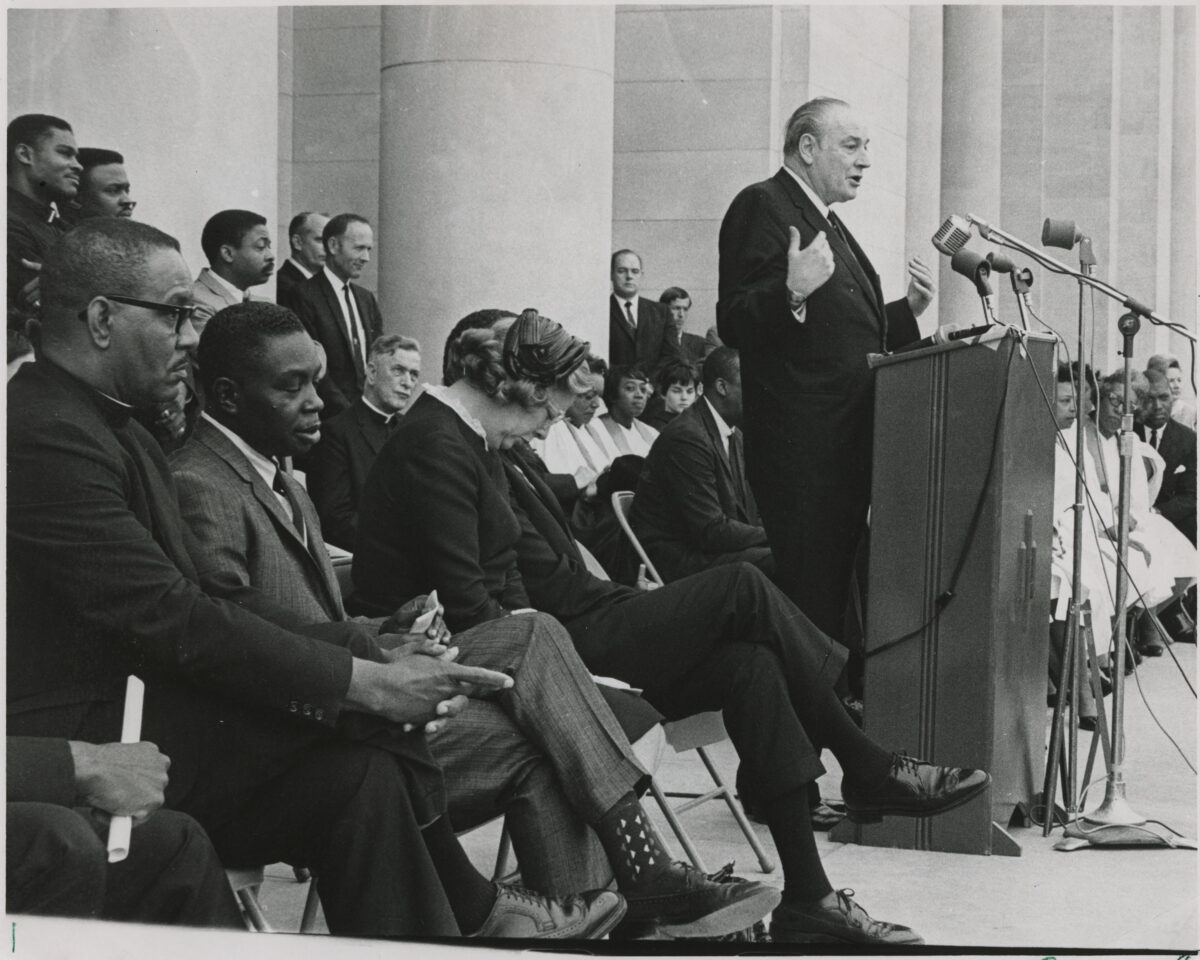 Winrock namesake Winthrop Rockefeller was the only southern governor to hold a memorial for Martin Luther King in his state.

And Winthrop Rockefeller, our namesake, was front and center as a fighter for racial equality during his time as a leader in Arkansas in the 1950s, ’60s and ’70s. To start at the beginning, his first foray as a public figure in Arkansas was as the founding executive of the Arkansas Economic Development Commission, which brought thousands of new jobs to Arkansas. Unlike economic development efforts in other states, Rockefeller fought to ensure that these new jobs would be open to workers of all races. And his effort over the next decade to become governor of Arkansas pitted him against the political machine of Orval Faubus — one of the most die-hard opponents of racial equality anywhere in the nation. He succeeded against the Faubus machine and became the most racially progressive governor in the South. During his tenure, he opened up state government jobs to Blacks where they had been blocked before. He expanded education spending in majority Black areas and expedited the desegregation of Arkansas’ schools. And he was the only governor in the South to fly the flags over the State Capitol at half-mast after the assassination of Dr. Martin Luther King, Jr. That is a legacy that continues to inform, direct and inspire us.

We have had many other inspiring Black leaders at Winrock over the last decades. One of the most prominent was Dr. Clifton Wharton, who was instrumental in the development of A/D/C with John D. Rockefeller III and served as an advisor on agricultural programming around the world. Dr. Wharton later went on to be the president of Michigan State University, Chairman of the Rockefeller Foundation, CEO of the insurance giant TIAA-CREF and the first African-American deputy secretary of state under President Bill Clinton. Dr. Wharton’s life story is one of remarkable achievement, and his long association with Winrock and its predecessor organization is one of our proudest legacies. Click here to see a short video that highlights some of Dr. Wharton’s contributions to Winrock International and the A/D/C program.

And there is Ruth Oniang’o, one of the pioneering African women in nutrition and agricultural development and the long-time chair of the Sasakawa Africa Association. Dr. Oniang’o was brought on in the early days of the program, which was founded by Winrock Board member Norman Borlaug, Japanese philanthropist Ryoichi Sasakawa and former President Jimmy Carter, and she helped to define and expand it. While African rather than African American, her work helped U.S. institutions share their knowledge and expertise as well as build awareness of Africa’s enormous economic and human potential among both domestic and international networks. In 1991, Winrock was tapped to lead the Sasakawa Africa Fund for Extension Education (SAFE), beginning with an innovative agricultural education pilot in Ghana that brought together agriculture schools, farmer organizations, ministries of higher education and private sector companies. Since then, SAFE has spread to nine countries and has graduated 4,000 mid-career extension agents. In 2017, Dr. Oniang’o was awarded the African Food Prize. And when you have an opportunity – hopefully as soon as this summer – to visit our new offices in Washington, D.C., you may have reason to meet with colleagues in one of our new conference rooms – the Oniang’o Room.

Advancing the cause of ending racism in our country has long been one of the driving motivations in my own professional life. During college, I was the local college representative for the U.S. Conference of Christians and Jews, working to create racial reconciliation in Birmingham. Because of that work, I was asked to speak at the 16th Street Baptist Church on Racial Reconciliation Day – without question one of the most humbling, and moving, experiences of my life. And if you visit my office, you’ll see three pictures of people that inspire me – Franklin Roosevelt, Ulysses S. Grant and Rosa Parks. Grant knew that slavery was America’s original sin, and he had no illusions as to why he led the Union Army during the Civil War – to abolish slavery. Franklin Roosevelt’s administration – with the constant encouragement of his wife Eleanor – advanced the rights and economic security of millions of African Americans. But it was left to Rosa Parks and her brave companions in Montgomery, Birmingham, Greenville – and Little Rock – to spark a movement for voting rights, education and equality that continues today.

We all have work to do – as individuals, as organizations and as a country. This year, let us all consider Black History Month as less a celebration of the past contributions of African Americans and more of a call to action to address systemic racism in this country and around the world.