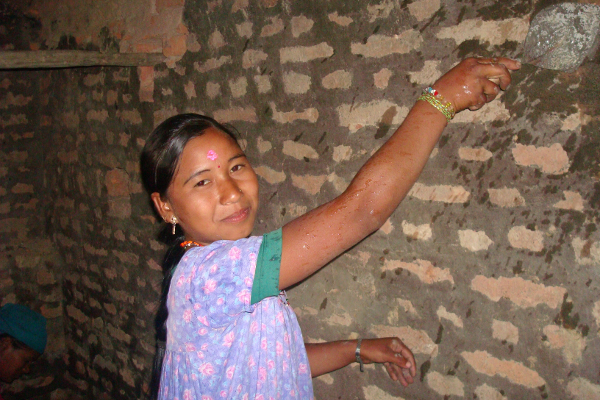 After years of servitude, Ram Kumari Chaudhary enjoys her job as a mason, which brings income and empowerment.

For four years, Ram Kumari Chaudhary worked in bonded servitude for a landlord in Ghorahi, Dang, Nepal. Ram Kumari, who comes from an impoverished family, was sold into servitude by her father for much-needed income.

Although the practice — referred to as Kamlari — is illegal, the tradition still survives in the Dang and Deukari valleys in Nepal’s Midwestern region. More than 20,000 young girls are estimated to have been sold as servants.

One of five children, Ram Kumari and her family lived on a small, arid patch of land that barely produced enough food for the family to survive. Her father worked for a low wage as a laborer for a landlord who offered him half the land’s harvest in exchange for Ram Kumari’s servitude. The young woman spent the next four years as a Kamlari for the landlord. She was able to go home after the government abolished the system. Newly freed, she and her family could hardly celebrate, however, since they had lost the payment from the landlord.

Fortunately, Ram Kumari was able to enter a free training program under the Winrock-implemented USAID Education for Income Generation (EIG) in Nepal program for disadvantaged youth. In the USAID-funded program, Ram Kumari learned how to work as a mason and completed on-the-job training, where she demonstrated her skills and zeal to learn.

Her new skill has given her a profession that provides a good source of income — an average of 200 Nepalese rupees per day — and she is already in demand because of her constantly improving expertise. “Instead of being a servant at others’ homes, it is better to be independent,” said Ram Kumari.

The EIG program is improving the lives of young people throughout Nepal through scholarships for schooling; literacy, life skills, peace building and entrepreneurial training; on-the-job skill training for employment-based work; and agricultural productivity and enterprise training for substantially increasing incomes.