Trees and Shrubs for Agroforestry on Atolls

Agroforestry for the Pacific Technologies
A publication of the Agroforestry Information Service
July 1995, Number 11

Agroforestry is a traditional practice on many atolls. A wide variety of native and naturalized tree species have been and continue to be used by atoll inhabitants for multiple purposes i.e. construction, compost, fuelwood, human food, animal fodder, medicine and as ornamentals.

Harsh sun, salt spray and poor soils make atolls difficult places to grow trees. Under these conditions people know that to grow valuable trees such as breadfruit, they must first dig deep holes and compost in them to prepare planting soil.

On some atolls such as South Tarawa, Kiribati a rapidly expanding human population combined with coconut cultivation have contributed to the loss of native forests. This has resulted in a scarcity, of tree products for every-day use, in particular timber for construction and fuelwood. Tree trials conducted recently in Kiribati to identify fast-growing trees for agroforestry have revealed exotic species adapted to atoll environments.

Climate
Atoll climates are warm and humid, with little variation in temperature range from one island to another (Small 1972). In general, atolls to the North of the Equator receive more rainfall than atolls to the south of the equator. In Tarawa, Kiribati the temperature ranges between 25°C and 34°C – the average is 28°C and the average humidity is 78%. Sunshine averages 257 hours per month (Barr 1993). Average yearly rainfall is a little over 2000 mm with the “wet” months from November to March. Droughts of several months and periods of a year or more with low rainfall occur (Webb 1994).

Soils
Atoll soils are derived from coral reefs and consist mainly of calcium and magnesium carbonates (Town 1982). Average soil particle size is extremely large compared to other igneous derived soils and therefore the soil is highly permeable with a low water holding capacity. The average pH is between 7.8 and 8.3 (Barr 1993).

In Kiribati, soils are shallow, well drained and deficient in nitrogen, potassium, and trace elements, especially iron, manganese, zinc and copper. The organic matter in the thin top-soil layer is almost totally responsible for nutrient recycling and exchange between plants and soil. Compost and organic material are added to planting holes/trenches to lower pH and make nutrients more available for plant growth. This is important not only for making primary elements available to plants, but also minor elements i.e. iron, copper, zinc and manganese (Barr 1993). The incorporation of organic matter also improves soil water holding capacity, of particular importance during periods of low rainfall (Webb 1994).

Iron deficiencies can be corrected with foliar applications of iron sulfate (Webb 1994), or by adding iron chelate to the soil. With nitrogen-fixing legumes, iron deficiency may also manifest itself as a N deficiency, as rhizobial symbiosis is dependent on iron (Sarrantonio 1991).

Sophora tomentosa and C. equisetifolia grow well on most atoll soils with a minimum of external inputs. Gliricidia sepium, L. leucocephala (common type) and D. regia grow well only on improved soils, such as those found in home gardens. Leucaena leucocephala K636 (giant type) and A. lebbeck are growing well only under partial shade from coconut trees and in soil that received one fertilizer application at the time of planting. Pithecellobium dulce is surviving but is stunted and chlorotic. The other species tested did not survive.

Agroforestry Uses of Trees and Shrubs on Atolls

Table 1 lists agroforestry uses of some common trees and shrubs found on atolls throughout the Pacific.

Fuelwood. Pemphis (Pemphis acidula) and the coconut tree (Cocos nucifera) are the preferred fuelwood species in Kiribati. Pemphis provides small, thin sticks that burn hot, even when green. Coconut palm fronds are commonly burned, and in places were fuelwood is scarce, coconut husks are also burned.

Of exotic species, casuarina, or ironwood (Casuarina equisetifolia) is a popular fuelwood. The wood burns hot, branches are easy to cut, and it resprouts after repeated cuttings.

Albizia (Albizia lebbeck) Mexican lilac (Gliricidia sepium) and leucaena (Leucaena leucocephala) are good fuelwood species although they are not yet common on atolls.

Construction. The hard, durable wood of alexandrian laurel (Calophyllum inophyllum) is used in home construction and for canoes. The trunks and leaves of coconut trees and screwpine (Pandanus tectorius) are used for house supports and frames, and thatched roofs. Because of its hardness and durability, pemphis wood is used mainly for posts in house construction. It is also used to make tools, boat parts and eel traps. Straight branches of guettarda (Guettarda speciosa) are used as stakes in seaweed production as they are very resistant to sea water.

Compost. Dead leaves and flowers of guettarda and beach heliotrope (Tournefortia argentea) are preferred composting materials on many atolls. Green leaves of sophora (Sophora tomentosa) are commonly used as compost material where the species is naturalized. Leaves of casuarina, Mexican lilac and leucaena are occasionally used. Rotted coconut husks and trunks are added to compost to retain humidity. Rusty tin cans are added to provide iron.

Human Food. Night blindness is a serious problem on many atolls because of a lack of vitamin A in diets. The green leaves of hibiscus (Hibiscus manihot), Indian mulberry (Morinda citrifolia), hedge panax (Polyscias guilfoylei), tree spinach (Pisonia grandis) and drumstick tree (Moringa oleifera) are rich in vitamin A and can be boiled and eaten like leaf spinach.

Pig Fodder. Rotted breadfruit (Artocarpus altilis) coconut meat, and screwpine fruit are traditional pig fodders. Although not commonly used on atolls for this purpose, leaves of albizia, Mexican lilac and leucaena can be mixed in small amounts with traditional fodders as a protein-rich supplement. 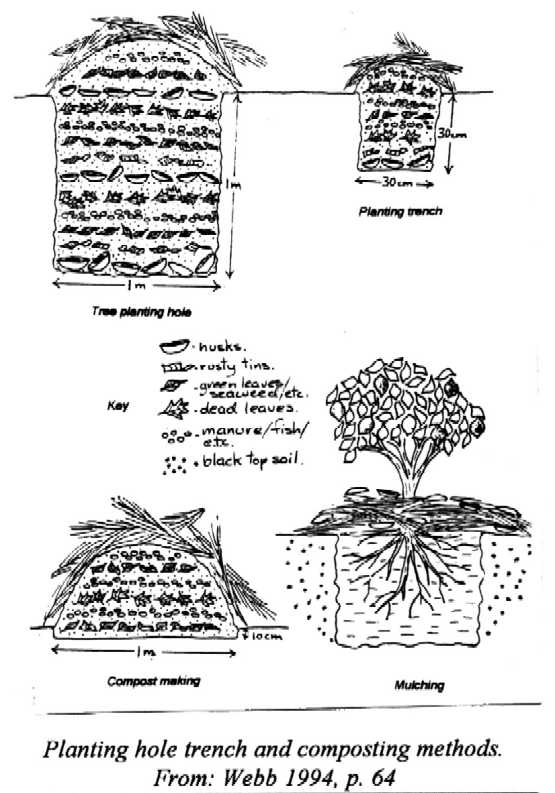 Medicine. The leaves, fruits, roots, trunks, and branches of many of the species listed in Table 1 are used in local folk medicine. Recipes are often secret and known only to a few people.

Various parts of the coconut tree are commonly used to make medicinal remedies. Oil extracted from coconut meat is used in message, and is mixed in a drink to treat stomach aches. Juice extracted from husks and bark fibers is used to treat hepatitis.

Ornamentals. Many of the species listed in Table 1 are valued as ornamentals for their shade, flowers, or shape. Hedge panax is a popular hedgerow shrub as it is shade tolerant and can be managed to grow to various heights. Alexandrian laurel is a popular shade tree planted around homes and Mexican lilac is planted primarily for its flowers.

Table 1. Agroforestry uses of trees and shrubs on atolls 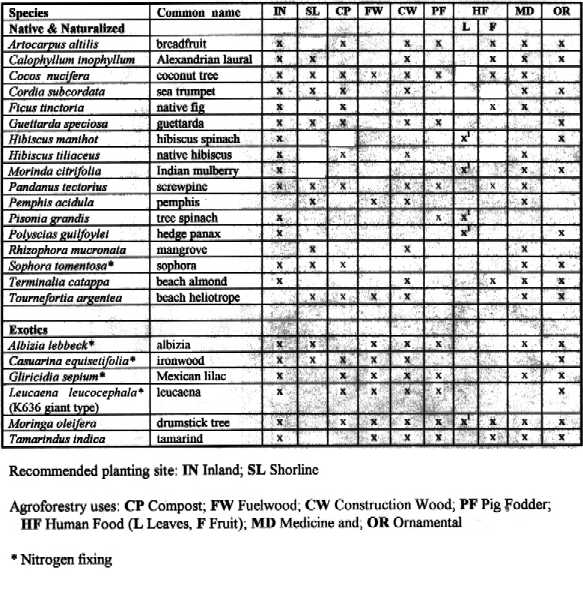 Agroforestry Promotion
Because tree planting is such a labor-intensive effort on atolls, tree selection should focus on multi-purpose species that require a minimum of inputs to plant and maintain. Where native species are known and used locally, they often require less promotion than exotics. In Majuro, The Marshall Islands there is strong demand for native species, especially ones with medicinal properties (Fred Muller, personal communication).

Nitrogen-rich leaves from fast growing NFTs such as sophora, casuarina, Mexican lilac and leucaena should be promoted as compost material.