Philanthropist Nanette Medved-Po spoke at Winrock International’s Washington, D.C. office about Generation Hope, the social enterprise she founded that uses the proceeds from bottled water sales to build classrooms in the Philippines.

A former actress and model, Medved-Po told Winrock CEO Rodney Ferguson that she came up with the idea for Generation Hope after serving on the boards of several non-profits.

“We seemed to be spending an inordinate amount of time on fundraising, and not enough on impact,” Medved-Po said. Many of the non-profits raise money from the same group of people, which leads to donor fatigue. “In order to have an impact, you need to plan long-term, and it’s hard to do if you don’t know where your funding will come from.” 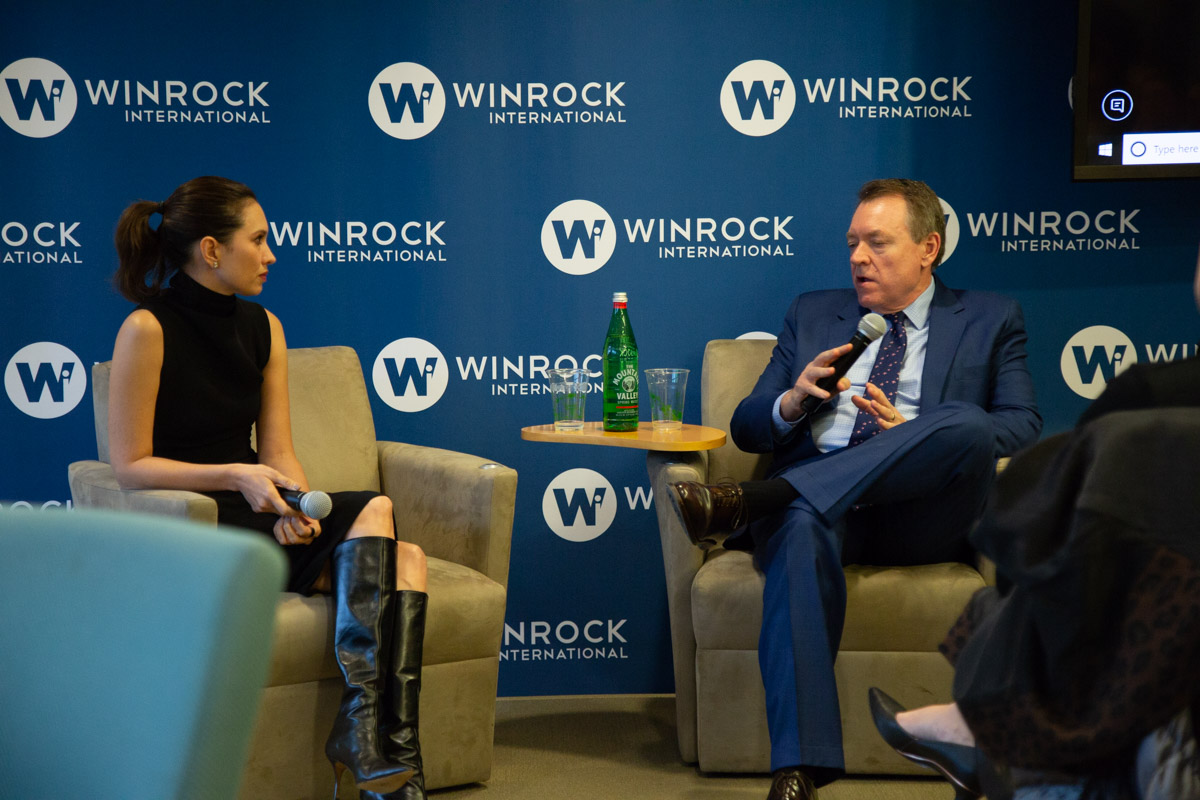 Medved-Po saw a potential solution with Product Red, an initiative by U2 frontman Bono. Recognized brands agree to produce a product with the Product Red logo, then use the proceeds to fund philanthropy. She approached several companies with a similar idea, but after finding little interest she decided to start her own product. Generation Hope now uses 100 percent of the proceeds from the sales of purified bottled water, called “Hope in a Bottle,” to build classrooms in the Philippines.

“I chose water because it’s a commodity. You don’t have to worry about trends, it’s an easy product to understand,” she said. She decided to use the money for classrooms because she was interested in improving education in the Philippines, and “people understand buildings as opposed to teacher training. If I was going to scale [the initiative], it needed to be easy to understand.”

With no budget for marketing, Medved-Po got the word out about the new bottled water by enlisting several celebrities she knew from the entertainment industry. They shot a commercial talking about their experiences attending public schools, which was then posted to social media. Now the bottled water is sold in stores such as Starbucks and 7-Eleven.

In the time since, Generation Hope has branched out by launching co-branded products, similar to Product Red, with partners such as Costco and Vita Coco in the U.S. Generation Hope has used those proceeds to build classrooms housing about 13,000 students, mostly in the impoverished state of Mindanao.

Medved-Po’s organization works with the Philippines Department of Education to determine locations most in need of classrooms in the country, which has a shortage of roughly 88,000 classrooms. To avoid corruption, Generation Hope builds the facilities before turning them over to the Philippines government for operation.

“They tell us where the schools are needed, we bid out the contract, and once it’s built we give it to [the government],” Medved-Po said.