Hidden Forces: The Role of Water in Economic Prosperity

A recent Wilson Center panel co-hosted by SWP explored the role of water in economic development and prosperity.

“If you woke up one morning and found the taps in your house were dry, the first thing many of us here would do is pick up our phone and call the utility,” said Gordon Mumbo, Team Leader for Sustainable Water for the Mara River Basin, Winrock International. But for people living in the Mara River Basin, if their taps run dry, there is no utility to call, said Mumbo. Their only choice is to grab the water container and head down to the river where water quality may be poor. Mumbo spoke at the September 30 event, “Hidden Forces: The Role of Water in Economic Prosperity,” part of the “Water Security for a More Resilient World” series co-hosted by the Wilson Center, Winrock International, and the Sustainable Water Partnership.

Mumbo and fellow panelists discussed the role of water in economic development and prosperity while also identifying barriers to sorely needed private sector engagement in the water sector.

“We see that the era of water abundance is over,” said Sam Huston, Chief of Party for USAID’s Water Supply, Sanitation, and Hygiene Financing Project. There’s rising demand and a growing need in both cities and rural communities. The impacts of climate change are being felt, and people are seeing significant pollution of water sources and decreasing water availability overall.

The economic well-being of the people in the Mara River Basin depends on water security and the river’s continual flow, said Mumbo, further emphasizing that community health depended on water quality measures just as much as an assurance of quantity. Mumbo also spoke of the increased unpredictability of rain adversely affecting crop growth and increasing the size of unusable wetlands. Rain, he said, was coming less frequently, but when it does, it pours, sweeping away the nutrient rich topsoil, causing siltation of the Mara River and expanding the unusable wetlands downstream, which are spreading into agricultural land.

In many countries in Africa and Asia, the proportion of women employed in agriculture can be as high as 60 percent to 70 percent, said Maitreyi Das, Manager of the Global Practice for Social, Urban, Rural, Resilience & Global Lead for Social Inclusion at The World Bank. Understanding the impact of water security on these women is critical given that their voices are often silenced due to a lack of land ownership or pathways for advocacy. For these women, water availability and quality in their homes and in their fields is crucial to their livelihoods, not only for cultivating crops but for cleaning the produce they sell in markets.

“We must ask, ‘Economic prosperity for whom?’” said Das. When improving the water quality and quantity, those most likely to be left out must be considered. Water security must be assured for all, including the poor, those with disabilities, and vulnerable populations living in protracted conflict.

These populations are the most likely to be unsupported by piped water supply and formal sanitation facilities, said Das. Even in cities with 80 percent to 90 percent water supply coverage, these marginalized populations are likely to be the uncovered 10 percent to 20 percent. They are then forced to turn to informal, make-do measures which are privately provisioned. If you’re lucky, you’ll have a water ATM, said Das, or a water tanker or a stand pipe may be located outside your informal settlement.

The global investment gap for the water sector is estimated at more than $100 billion per year, said Huston. “Globally, that’s three times the current investment rate.” It is often difficult to attract investment to the water sector, given that the areas most in need are often the most unstable. They suffer from weak and fragmented institutions and their utilities are generally poorly managed with low efficiency and limited accountability. These factors mean that the water sector does not attract a lot of “willing capital,” said Huston.

This untenable situation is in part due to the water systems not being run by the public sector, but rather by small private operators that are not distributing water with appropriate licensing, he said. For a project in Cambodia, USAID is working to properly license these private operators so that their water companies become eligible for private investment. Governments under the most water stress, he said, often reach a pivot point when they realize that the private sector can help them develop a water management system. At that point, they become more open to creating pathways for investment. 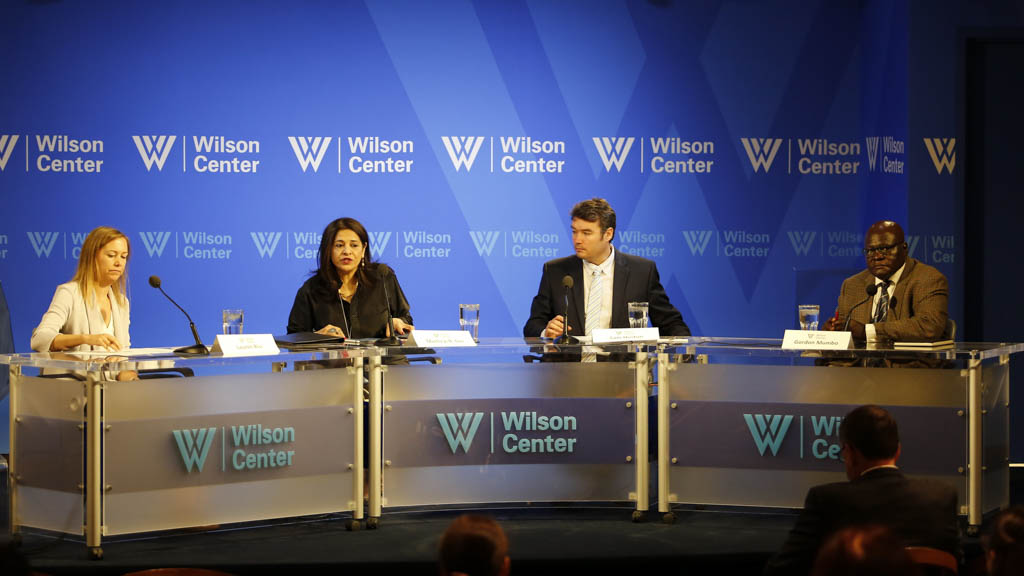 Right to left: SWP’s Gordon Mumbo joined panelists Sam Huston of USAID, Maitreyi Das of the World Bank, and host Lauren Risi of the Wilson Center to discuss the role of water in economic prosperity. Photo by Wilson Center

All three panelists agreed that governments and public investment need to pave the way for private investment. The institutional and regulatory foundations and access to financial systems are central preconditions to private sector involvement in provision of water, said Das. An enabling environment and corporate governance are “absolutely fundamental for increasing investment,” said Huston.

Das demonstrated this point with an example of the state reaction to recent flooding in Orissa, India. The state brought together the private sector, telecom sector, social media, and other actors to assist in facilitating the evacuation and support the immediate aftermath and rehabilitation. Furthermore, Das said, unless public and private systems work together, are accountable, and information flows, it will be difficult to address crises in the future. This type of cooperation between government and the private sector is not only important in times of crisis, but also in the daily provision of water.

On the Road to Self-Reliance

Enabling private sector investment in the provision of clean water for water-stressed countries, and doing so with an eye to those communities often left behind, all panelists agreed, is critical to boosting economic prosperity. By extension, improving water security puts these communities on a path to self-reliance.

This story was originally published on newsecuritybeat.org. It was written by Brigitte Hugh, an intern with the Wilson Center’s Environmental Change and Security program.