From Ancient Lands, A Modern Solution 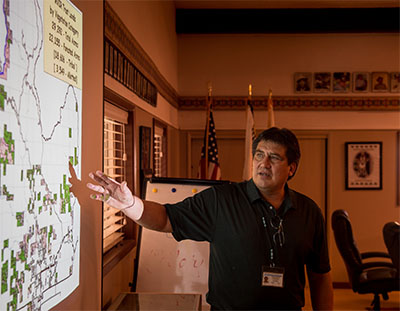 The Eel River slices through Northern California, slinking its way up the San Andreas fault. Its rocky shores are flanked by forests ranging from the magnificent redwoods of Humboldt County to the rugged oak woodlands of Mendocino County. These landscapes have historically fueled California’s booming economy as a seemingly endless source of timber.

Today, they represent another valuable commodity: carbon offsets. A scenario where forest owners meticulously inventory and monitor trees for their value as climate regulators rather than lumber may have been unimaginable to past generations, but it’s a critical part of California’s successful strategy to lower state emissions. And it’s had an outsized benefit for the original inhabitants of these forests — Native American tribes — who are demonstrating that selling forest carbon offsets can help fund the sustainable management of their ancestral lands.

California’s cap-and-trade program was launched in 2013 as part of the state’s ambitious efforts to curb its contribution to climate change. The American Carbon Registry (ACR), a Winrock enterprise organization, is the first private voluntary carbon credit registry in the world and one of only three approved offset registries under California’s cap-and-trade program.

Forest carbon projects have delivered over 80 percent of the carbon offsets issued under cap-and-trade since 2013. These apply California’s strict standards for project development and documentation to demonstrate that carbon impacts are additional to any other underlying requirements or conditions, commit to maintaining those practices for 100 years, and undertake cost and labor-intensive inventories to quantify and monitor forest carbon stocks.

Over half the forest carbon offsets registered through ACR for the cap-and-trade program in California have been generated by Native American tribes or corporations. They leverage their existing timber inventories to develop carbon stock and growth estimates and align their conservation-oriented objectives and land management practices to establish forest carbon offset projects cost-effectively.

The Round Valley Indian Tribes (RVIT) in Covelo, California, showcase this dynamic, as the first tribe to start a carbon offset project in 2011 — even predating the cap-and-trade program. RVIT has been limiting timber harvest significantly since the 1990s, encouraging growth by thinning young trees to manage competition for light and water in the dry landscape. Harvest is well below the allowable annual volume as determined by the State of California regulations, resulting in increased carbon stocks over time. This has resulted in carbon offset payments exceeding
$1 million since the project began, which have been invested in natural resource management capacity-building and economic development projects in its underserved valley.

RVIT’s achievements in reinforcing tribal values were recognized by ACR’s Commitment to Quality Award. As we enter the next decade, Winrock remains optimistic — and dedicated to helping partners worldwide achieve ambitious climate benefits from forests while empowering the critical communities who live in them.