Innovative Farming Techniques Good for People and Ecosystems in Bangladesh 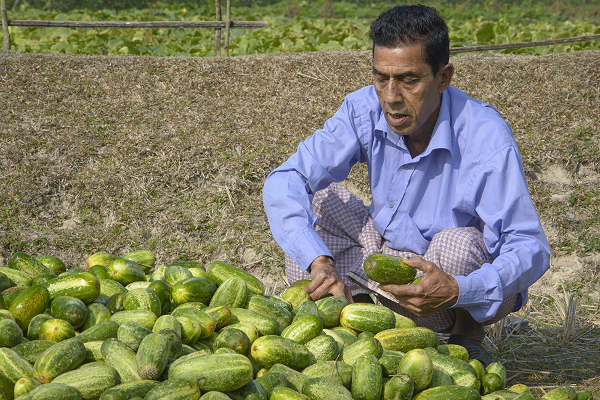 In the low-lying flatlands of Jatra Pasha in Bangladesh, Gunendra Sen’s lush green vegetable farm is burgeoning with potatoes, tomatoes, beans, squash, lentils and cucumbers. He is a lead farmer for the Winrock-implemented Climate Resilient Ecosystems and Livelihoods (CREL) project, demonstrating to people in his region that border the Hail Haor, a major wetland in Sreemongal, that there are alternatives to extracting directly from nature.

Villagers like Sen, who once lived off fishing in the wetlands, are being introduced to economic alternatives such as homestead gardening, handicrafts, ecotourism or other appropriate activities for a particular household or community. For his part, Sen provides evidence to others who may be taking from the declared eco-sanctuaries, that there are alternative, and more responsible, sources of income.

Sen is incorporating innovative farming techniques — learned from CREL, which is funded by USAID — into his regular cultivation practice: planting seeds in rows, instead of the prevailing custom of casting them wide and haphazardly; using calcium carbonate to act as a pH buffer to till the land; spreading natural cow dung rather than chemical fertilizers; and growing vegetables in an area not used before. In the four months he has used these farming practices, Sen has seen his vegetable yield almost double.

Watching as two of his employees sort through the plump, stout cucumbers popular this time of year, Sen proudly says he has harvested about 3,500 kg in almost a month since the season began. By the end of the following month, he hopes to collect another 2,000 kg. Comparatively, in prior years, when he was not using CREL techniques, his entire annual crop yielded 2,000 – 3,000 kg total. “I like this technique,” he says, grinning. “I thank CREL for giving me training, and in the future, I will use this technique for my livelihoods and my neighbors will too.”