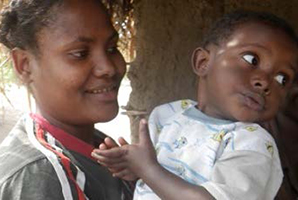 A year ago, Lavina Venance would have been dubious if you had told her she would now have her own vegetable business. But thanks to Winrock International and the USAID-funded Integrated Water, Sanitation, and Hygiene (iWASH) Program, this young mother of two in Bwage, Tanzania, is becoming a successful entrepreneur.

Before the iWASH Program, gardening and other water-dependent activities were nearly impossible for the people of her village. The nearest reliable water source, over a mile away, yielded polluted water contaminated with waterborne diseases, and villagers had to transport the water in jerry cans on their bicycles. Lavina’s water supply was limited to her growing family’s most basic domestic needs.

Then there was a problem of earning a living. Since migrating to the village of Bwage from Kilimanjaro in 2007, Lavina and her husband, Sevarina, had actively searched for alternative income sources. They experimented with growing Kilimanjaro type crops like coffee and bananas, but these were not successful in their new setting. To survive, they began growing maize, paddy rice, and cowpeas, like the locals. “We really struggled to make a living in those early years and felt as though we had exhausted all the alternative options available,” said Lavina.

In 2010, the USAID-funded iWASH Program begane to work with the Bwage community to address their lack of access to water. Using a Multiple-Use water Services (MUS) approach, the program took a holistic view of water services development that considered the community’s need for water for both domestic and productive uses, such as gardening and livestock. In addition to ample water for all needs, iWASH focused on bringing potable water closer to the villager’s homes. “I now have easy access to clean water less than 10 minutes away from my house,” Lavina explains proudly. “As a result, we now have as much water as we need, whenever we need it.”

Winrock helped the community organize itself to ensure the new system would operate for many years: “Unlike water from the river, we pay for water from the pump, so that maintenance and repairs can take place. Many people now depend on water from the pump so it’s well used and everyone seems to feel that it is worth it.” 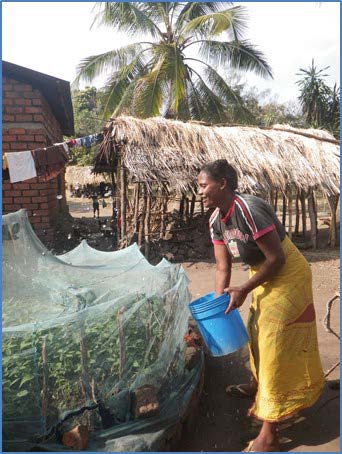 “We now have as much water as we need, whenever we need it.”

After the new pump was installed, it took Lavina and her family a few months to realize the extent of its potential benefits. When iWASH began to organize kitchen garden training for small-scale organic vegetable gardening, Lavina was curious and volunteered her home. “To be honest, I had no real idea what vegetable gardening might entail. Another thing I hadn’t anticipated at the time was the impact the garden would have on my family in terms of increased income, improved nutrition, and being able to develop new skills.”

Today, Lavina’s kitchen garden produces local salad leaves (mulukhia), spinach, Chinese cabbage, and a few lettuce varieties that she brought from her home in Kilimanjaro —all of which are in great demand on the local market. “I can sell a bundle of leaves like this…” she says, indicated a small bunch of leaves between thumb and forefinger “…for TZS 200 (US$0.1). We have already started expanding production with a second garden behind the house, just to keep up with local demand.”

Along with her garden, Lavina has also nurtured her business talents. The detailed record book that she had kept since beginning her venture indicated that her garden has already yielded an income of almost TZS 60,000 (US$37) over a three-month period. Combined with the economic value of the family’s increased home consumption of vegetables, the cash injection into the household budget more than covers the cost of the pump water the family uses for the garden (TZS 3,500 or US$2/month). “Though we have only been operating for the past three months or so, vegetable production is now set to become our main source of income.” 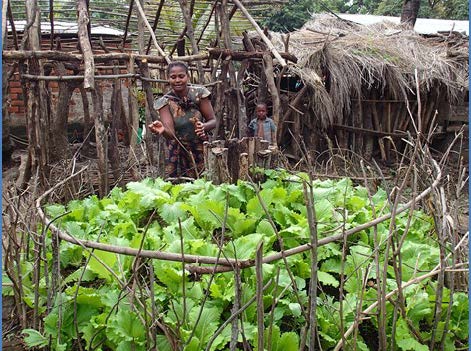 Currently, Lavina is scaling up vegetable production to satisfy local demand. She and Sevarina are aware that sales are likely to increase, given the proximity of their home to a new highway that is scheduled to pass through the village. “We are more experienced now and have a better idea of what we are doing, so productivity in the garden is increasing. Adding the second garden will obviously also be another big boost to production,” she says.

Lavina and Sevarina are optimistic about their future and have plans to use their new income to expand into other sources of livelihood. “We plan to use future earning to invest in improved poultry production. We already have an improved cockerel and five females to start off with and will soon need to construct our own poultry house,” Lavina says. She adds, “It’s hard to imagine all the problems we suffered when we first moved here. Our situation has changed so much now.”