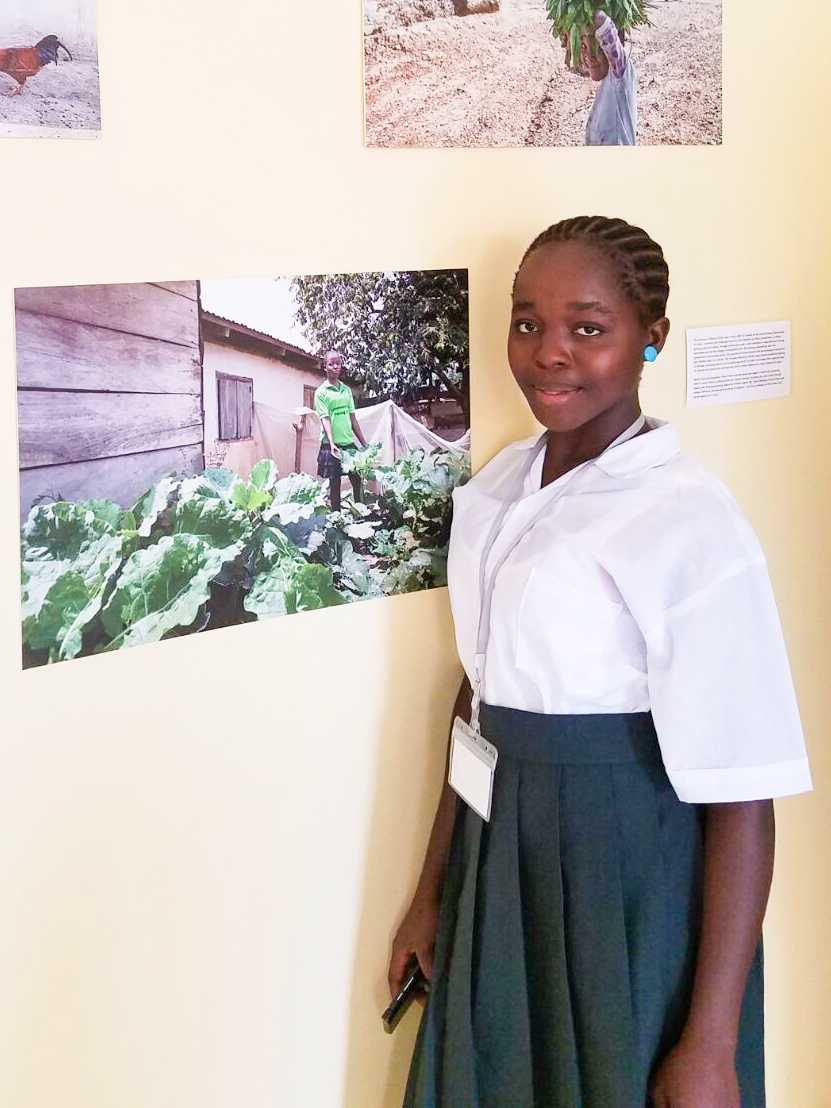 Mercy, a student participant in the ARCH Model Farm School, poses beside a photo of herself in the garden she created.

At the National Sustainability Conference on Child Labor in Monrovia, Liberia, children chat and laugh as they look at photos on the wall. One likes the photo of a young woman wearing protective gear because “she looks powerful.” Another points to an image of kids playing soccer because “they look happy.” The moment is infused with vitality. These are children being children. And it’s made possible by the work of the USDOL-funded Actions to Reduce Child Labor (ARCH) project, implemented by Winrock.

The photos by award-winning photographer Paolo Patrizi illustrate the visible role of ARCH in the community.  More striking than the photos, though, is the sight of young Liberians once engaged in child labor browsing the exhibit in their school uniforms – an undeniable symbol of their journey to the classroom. 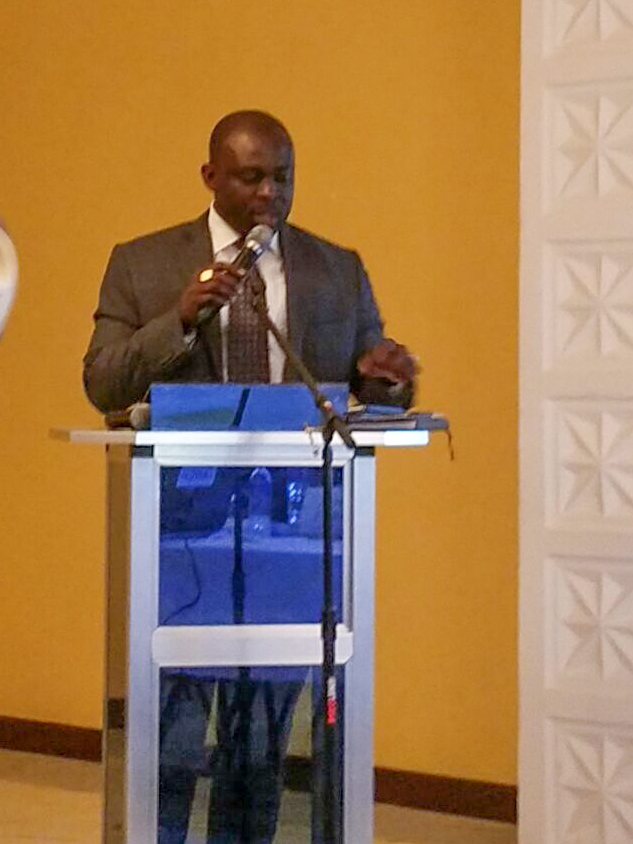 One month before the conclusion of the ARCH project’s four-year mission in Liberia, the Liberian Ministry of Labor and Winrock International convened stakeholders and beneficiaries to reflect on achievements, discuss challenges and forge commitments for the continued fight against child labor.

Throughout this three-day conference, students participate in group discussions, asking and answering questions with government officials and other leaders as they actively participated in discussions, sharing their views on issues affecting children. They share stories of their experiences — an arm twisted from an injury, loss of sight from the acid that erupts from a tapped rubber tree — and without knowing it they show off the debate skills they honed in afterschool programs. Their voices are essential in the continued fight against child labor in Liberia.

The ARCH project has supported the Liberian Government’s efforts in the rubber-growing areas of rural Monteserrado, Margibi and Nimba counties by creating economic opportunities for parents so that they no longer rely on their children for help, which means that child labor has been reduced in these areas. 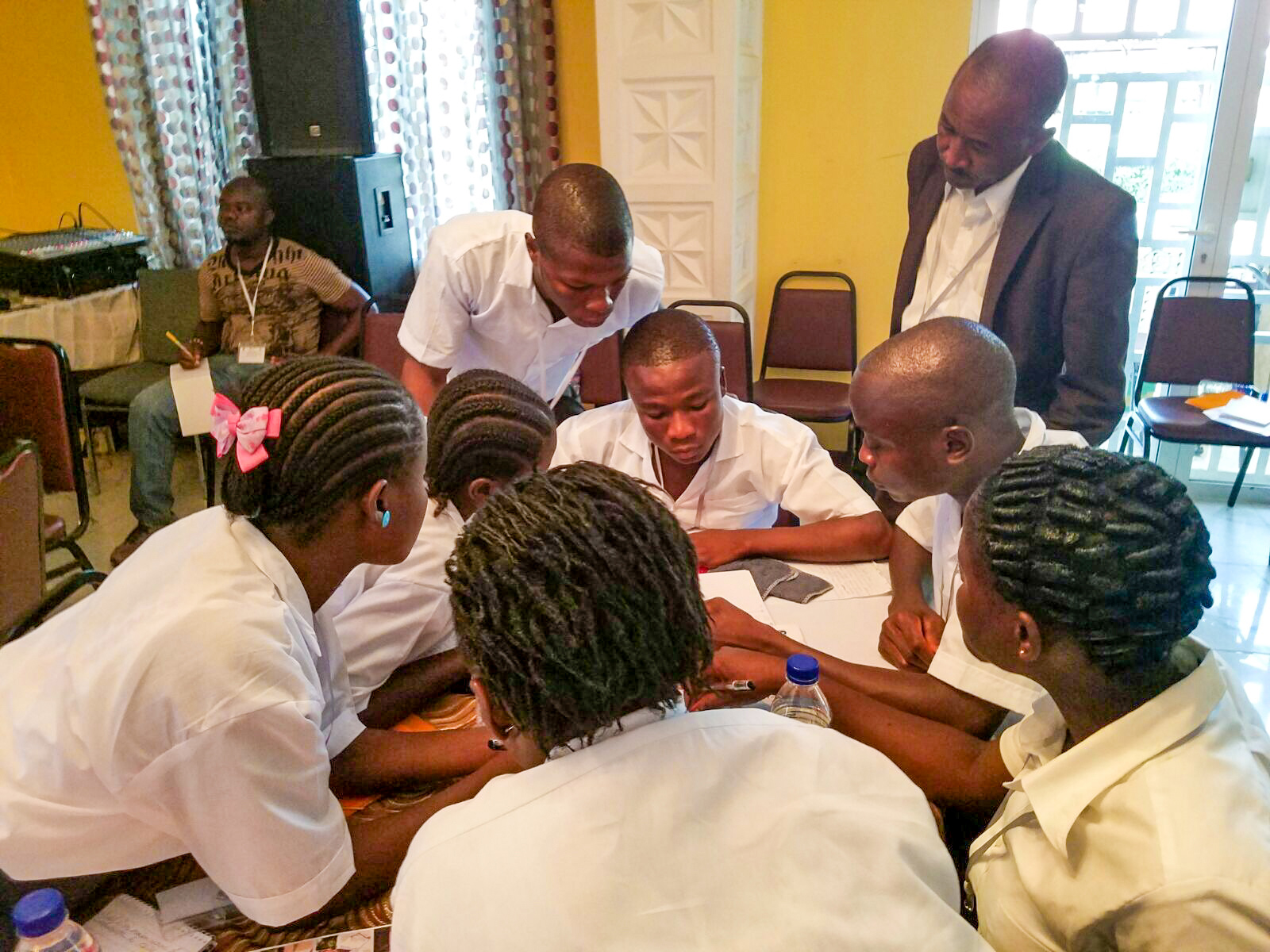 Students collaborate to list the major causes of and solutions to child labor. Afterward, each group shared its conclusions.

The project has served more than 3,700 households and more than 10,100 children. One beneficiary was Jerry, who wanted to send his son to school but because of financial constraints had him tapping rubber trees and burning wood for charcoal. The ARCH project trained Jerry in pork production, which has increased his earnings, and provided his son with a uniform and supplies so he can now attend school. Winrock’s communications officer for the ARCH project, Victor Z. Davis, produced this short film about Jerry’s journey from rubber tapper to prosperous pork producer.

In addition to improving incomes for parents, ARCH has dramatically increased school attendance, eased the financial burden of parents and fed hungry children through school feeding programs. School attendance has grown to 99 percent of capacity. In collaboration with the Ministry of Agriculture and Ministry of Education, ARCH has united food producers, Parent Teacher Associations and school employees to grow, store, manage and prepare food for students, more than 7,400 at last count. Local stakeholders will soon take over the school feeding program so that it, like so many of ARCH’s benefits, will continue. 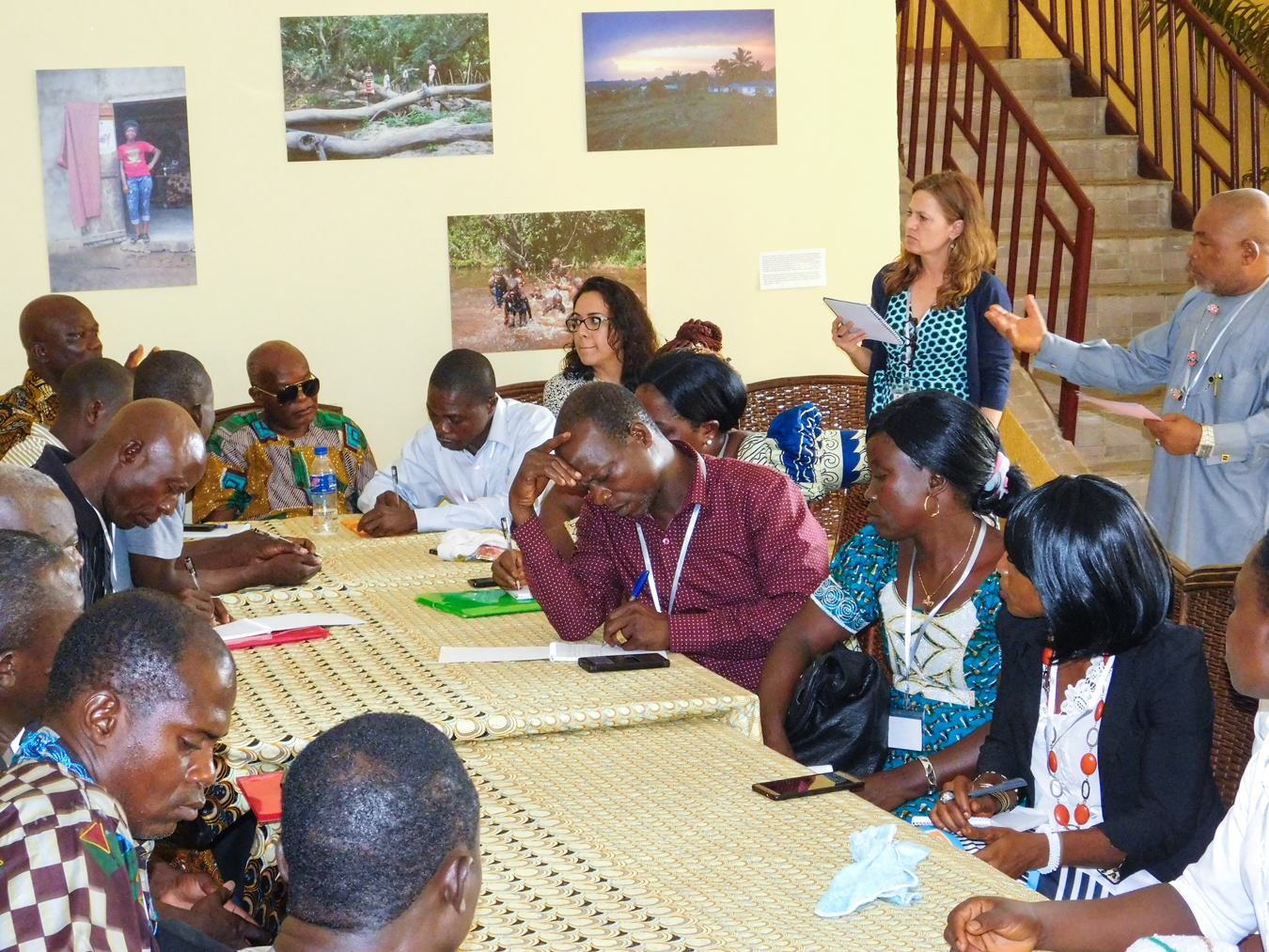 Conference participants discuss efforts to strengthen institutions, such as the Labor Inspectorate, to fight child labor.

At the national level, ARCH has supported the Ministry of Labor (MoL) as it established a steering committee to eliminate child labor and help the Government of Liberia improve child labor monitoring and policy implementation, including the Decent Work Bill, which contained a list of hazardous work prohibited for children under the age of 18. ARCH also helped the MoL develop a National Action Plan on the Elimination of the Worst Forms of Child Labor (NAP) in coordination with the International Labour Organization. ARCH has partnered with the Government of Liberia, local NGO partners, trade unionists, rubber companies, smallholder rubber farmers and beneficiaries.

“We should therefore like to thank the Department of Labor of the United States of America through Winrock ARCH for a magnificent job in the fight against child labor,” said his Excellency Joseph N. Boakai, Vice President of the Republic of Liberia, while sharing his own experience as a child laborer in a statement delivered at the conference. “We cannot thank enough our partners, including the Winrock ARCH project, that have so generously contributed significantly to this endeavor.”

The conference culminated in the Ministry of Labor’s official adoption of an Outcome Document—a record of stakeholder commitments. This document is more evidence that the true impact of the ARCH project is not simply the provision of supplies, but empowered leaders of change — from students, parents and families to leaders in business and government.

While the ARCH pilot program is ending, the sustainable solutions it created will continue to bear fruit as government, local leaders and stakeholders steward and expand upon these achievements, more determined than ever to keep the voices of children at play ringing throughout the land.