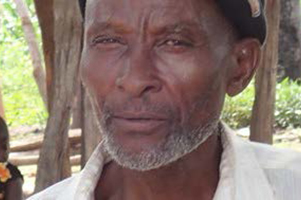 “Other villagers … ask me for help and advice; inspired by the fact that they can manage this activity without relying on external inputs, mostly just using their existing skills, local materials and the new technical information.” – Peter

Though it has taken nearly 30 years, Peter Mbuya, a 52 year-old farmer from Bwage Village, is on the cusp of achieving a long-cherished dream. “Owning a car has always been my vision… the goal that pushes me to develop further and continue to struggle for my family.” says Peter.

Improved access to water has changed Peter’s life. Before Winrock came to Bwage in 2010 through the USAID-funded Integrated Water, Sanitation and Hygiene (iWASH) Program, the community’s only reliable source of water for drinking and bathing was an hour from the village. The source was a permanent, but heavily contaminated river. Water transport was so arduous that it typically fell to men, who carried as many as six 20-liter jerry cans suspended from their bicycles at a time. Peter’s family of 12 rarely had enough water to meet basic domestic needs, much less for other productive uses.

“The water from the river was not clean. Sometimes, to save the long trek, people would even use water from stagnant pools closer to the village. Malaria, diarrhea and other waterborne diseases such as cholera were very common.” Peter, who had voluntarily migrated to the area in 1984, remembers his initial suffering. “We newcomers had very weak resistance and suffered both physically and financially while trying to adapt to our new home.”

Peter and his family survived on seasonal rain-fed crops such as paddy rice, cowpeas, maize, and coconuts. Even simple activities like raising goats and chickens were problematic because of the lack of water. “For goats and chickens alone we needed at least two buckets of water a day on top of an already insufficient supply for the family,” says

Peter. The lack of sanitation and water meant that the productivity of the animals was so low that they would rather have them fend for themselves than invest money and time in their health and care.

In 2010, when Winrock introduced the Multiple-Use water Services (MUS) approach, things began to change. “When the [iWASH] project arrived in the area and wanted to talk about water for drinking and other activities, I must admit, we were very skeptical. You see, we were desperate, but had been disappointed so often before by [political] organizations taking money and leaving only empty promises.” However, according to Peter, the community soon started to gain confidence, largely because the project communicated in a transparent way. The Winrock team involved the community in addressing issues such as water for both domestic and livelihood activities, introducing new water technologies and discussing why and how the community needed to financially support long-term efforts.

“I personally felt assured and encouraged by this approach and wasn’t disappointed! There is now a community pump providing clean water only 150 meters from my home. I can afford to wash twice a day now and don’t have to feel guilty about asking my wife to put water aside for my personal use. What’s more, the pump is reliable and used 24 hours a day so we have no problem raising money for organizing the repair of the rope or other parts.”

According to Peter, the immediate impacts of better access to water were improved sanitation, reduced health problems and associated costs, and savings in terms of time and effort. Families also gained an improved sense of wellbeing and renewed interest in livelihood activities such as raising livestock. But as Peter notes, “The trouble was that we were automatically using the same old, low-input low-output techniques as before.” 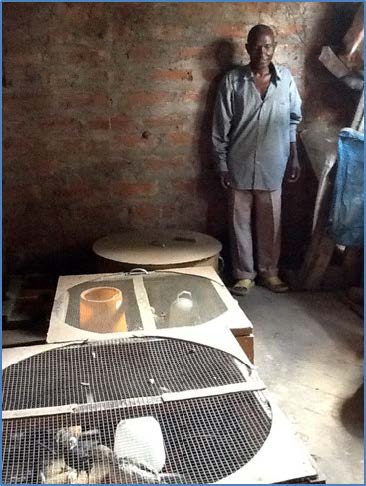 Some months after pump installation, Winrock personnel returned to discuss existing and potential livelihood options with the community. Peter, always hungry for new ideas and information, suggested poultry production. He listened critically to the proposals made by the experts and was quick to appreciate the importance of the technical information provided. “What really helped was the training. It wasn’t that we didn’t already know many things, just that we lacked the proper knowledge to help us evolve.” With Winrock assistance, he calculated the economic potential of chicken and egg production based on a strategic combination of low-cost housing for the chickens, nutrition, disease prevention and control, and flock management .

Allowing for losses and other production variables, Peter estimates a conservative annual profit margin of over Tsh 6,000,000 (US$ 3,719) from his new poultry enterprise, a complement to his existing rain-fed farming activities. He designed and constructed his own poultry unit, scaled to accommodate batches of at least 15 laying hens at a time. He also acquired improved poultry stock and invested in the appropriate Kinengunengu Brooder technology.

Peter coordinated with neighboring producers to save money by purchasing inputs such as feed and veterinary products in bulk. On the basis of market research, he decided to focus on the lucrative and logistically manageable local chicken meat and egg market.

Though Peter’s new enterprise is not yet fully operational, he’s already raised over 400 improved chickens, 100 of which he sold locally at an average of Tsh8,000 ($5) each for a total profit of $500. This helped him establish a regular sales outlet for eggs. In addition, his family has improved nutrition from increased egg and meat consumption, increased income, and better access to credit, which will help them scale up and diversify livelihood activities in the future. “My older children, who laughed at me in the beginning, are now great ambassadors and have followed my example. Other villagers too ask me for help and advice; inspired by the fact that they can manage this activity without relying on external inputs, mostly just using their existing skills, local materials and the new technical information.”

Peter is philosophical about attaining his life-long dream. “According to my plan, I will be able to afford to buy my car within a year. But, you know, sometimes it’s not achieving the dream that’s important; it’s the process of striving towards it that counts. There is still a lot I need to do first.”