In the rear of an empty city lot in downtown Stuttgart, Arkansas, population 9,195, five school-aged kids sit down and quietly erect a giant Jenga tower. It’s just there, waiting to be built on a Saturday morning, so they do.

Over on the side, a young couple plops into a pair of chairs facing an inflatable movie screen, wondering what might be showing. Betty Buell, a lifelong Stuttgart resident, wanders in with her husband under a freshly installed arbor and makeshift wall of wooden pallets bordering the Main Street side.

“I’m all for change, and the new,” said Buell, the retired owner of a local flower shop in Stuttgart, a town about midway between Little Rock and Memphis known for rice production and processing, an active hunting and fishing lifestyle, and a famous annual duck-calling competition. “We’re going to enjoy this,” Buell said, looking around with curiosity.

The “this” to which Buell referred, however, is not actually there yet. It’s just an idea, manifested in physical form as a pop-up park in the once burned-out lot. The idea: to demonstrate the simple but awesome power of placemaking as a catalyst for connection, community development, and economic revitalization in the Arkansas Delta. The event was organized by Stuttgart civic and business leaders, supported by Winrock’s U.S. Programs team through a U.S. Department of Agriculture (USDA) grant, with partners including the University of Arkansas for Medical Sciences State Physical Activity and Nutrition Team (UAMS SPAN) and Crafton Tull, a Little Rock-based city planning and engineering firm.

“Local leaders in rural towns like Stuttgart are on the front lines of economic development in the Arkansas Delta, but often lack access to the resources, funds and technical advice they need to assess and maximize opportunities,” said Linsley Kinkade, Winrock’s Senior Director of U.S. Programs, which implements USDA’s Rural Placemaking Innovation Challenge (RPIC) project in Stuttgart and three other small Delta towns: England, Lonoke, and Helena-West Helena.

Winrock has worked to increase economic opportunities in rural Arkansas communities for decades, Kinkade said, adding that RPIC is part of that continuum. “Our rural communities are the lifeblood of our state and region. Winrock works side-by-side with Delta region residents to create experiences that highlight local assets, establish long-term sustainability, and most importantly, ensure these indispensable communities continue to be unique places where people can live, work, and grow.”

Together, Winrock and community leaders link the data and resources needed to experiment with new ideas, survey resident interest, and practice locally-driven placemaking.

Kinkade added: “It is inspiring to stand in a downtown street with residents and elected officials taping temporary crosswalks, erecting tents, seeking community feedback, and seeing a new potential asset come to life. Winrock is committed to putting in the sweat equity with the community to achieve local, community-specific goals.” The RPIC program builds on additional downtown revitalization work implemented by Winrock under a related USDA grant program, which provided initial capacity building assistance to local leaders and set the stage for their engagement in business development and growth initiatives.

Judging by the community response in Stuttgart, the approach works. By noon on Saturday, May 22, nearly 300 people had filtered through the once-vacant lot, drawn by the sight of kids playing, the movie screen, picnic tables and potted plants that weren’t there before, and the general, festival-like atmosphere evoked by white canvas tents and a popcorn machine. Dave Roberts, Senior Vice President of Crafton Tull, stood nearby at a rendering of a layout for the lot’s transformation. Propped on a tripod to draw attention and generate discussion about the potential of the space, the schematic included an outdoor games area, landscaped beds bordering the Main Street sidewalk, pattern-painted floors, murals and a central pavilion, along with a hinged-door shipping container for concessions. 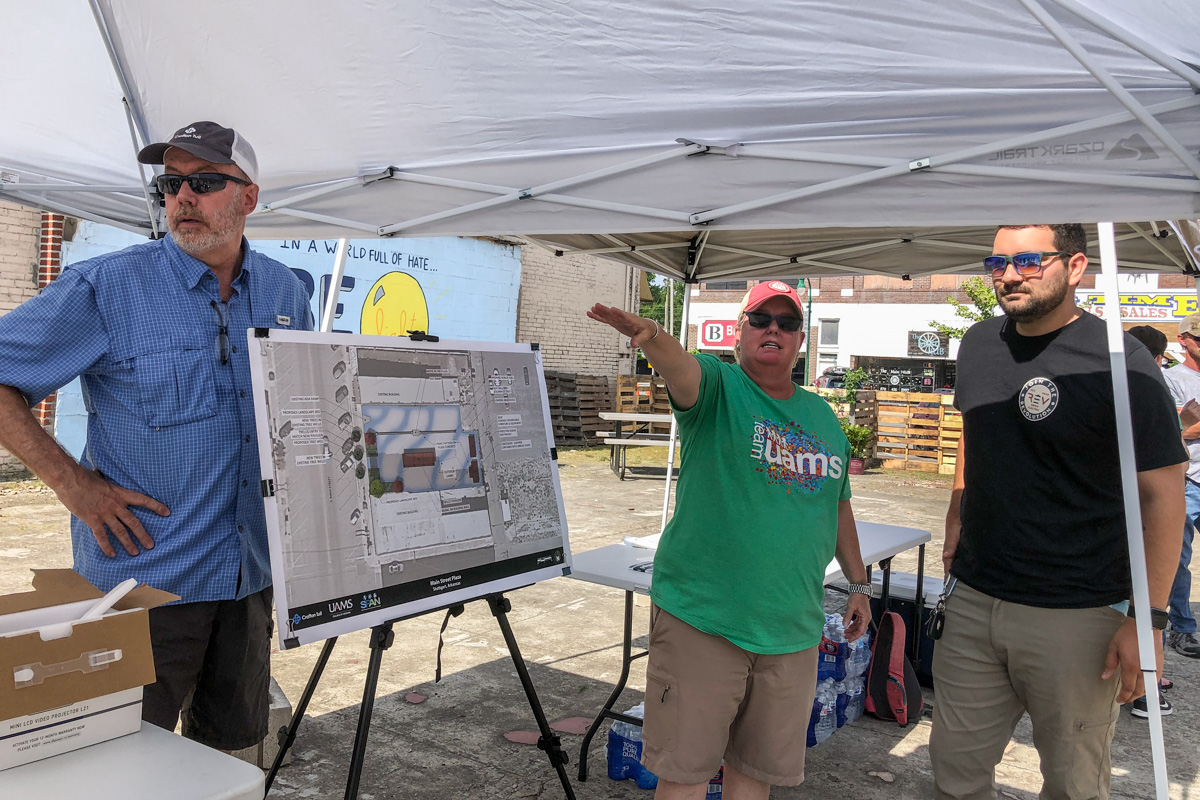 “What excites me most about this project is just getting people out,” Roberts said, noting that Stuttgart is on the planned U.S. Bike Route 80, part of which will run from West Memphis through Stuttgart, North Little Rock and Little Rock. That means cyclists will be looking for easy-to-access places along the route where they can rest, grab a bite, and check out the local scene, said Roberts, himself an avid cyclist.

“A lot of these towns, they just really need a little love,” he added.

The park project includes refurbishment and safety improvements at intersections on Main Street to ensure safer pedestrian access. Roberts, the Winrock team, UAMS, elected officials, and volunteers spent hours, with the city’s permission, laying black-and-yellow safety tape and positioning pylons to mark temporary crosswalks near the park, to model in real-time how traffic calming systems could work. After the crosswalks were set up, Main Street drivers instinctively slowed or stopped on Saturday when they saw walkers near or in the taped zones, demonstrating the relative ease of transitioning from a vehicle-focused environment to a people-centered place. 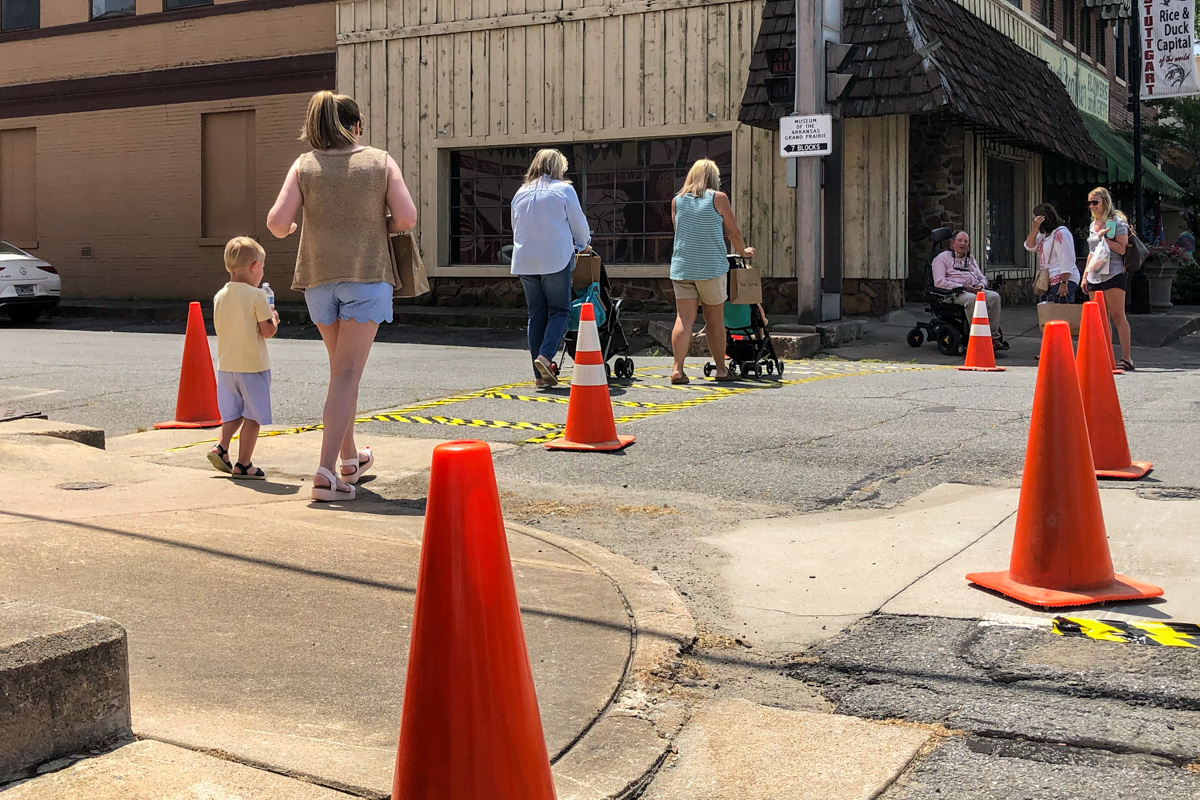 Pedestrians use temporary crosswalks near the pocket park project in downtown Stuttgart. Photo credit: Tim May for Winrock International.

At a table near where Roberts stood, volunteers collected input about the park, for which Stuttgart’s Rotary Club has already raised $25,000 in seed funding. (An important element of the RPIC program includes community fund matching to ensure local buy-in, investment and sustainability.) Suggestions included everything from installing tables with umbrellas or other shading to making the park dog-friendly, planting trees and flowers, adding overhead lighting, bike racks, fans, public restrooms, a staging area and electric hookup access, inviting food trucks, and even including a fire pit in the space.

Stuttgart’s merchants are supportive, and say the collaborative planning fostered by the project can lead to regeneration not only in Stuttgart, but can serve as a template for other rural Arkansas towns. In the wake of COVID, finding creative, locally-owned solutions to facilitate community-based economic development is needed now more than ever, said Kim Bethea, co-owner of a pharmacy on Main Street.

“The Delta is not the most prosperous part of the state,” said Bethea. “This [park] would be a real shot in the arm to help us regain some momentum and vitality … It has been a real struggle for businesses to keep afloat during the pandemic.” Bethea’s sister, Krystal Holt, who owns a boutique and bridal registry next to the empty lot ── which she also owns, and has donated for the park project ── couldn’t agree more.

“The downtown is just so important” to the economic prospects of the entire town, she said. Her nephew has already painted a bright blue mural on one of the walls, giving rise to ideas for additional public art or mural making in the park and town, similar to Fort Smith’s successful public art and mural initiatives.

The younger generation of Stuttgart is also ready to embrace change. Recent University of Arkansas graduate Madison Homra, daughter of the late Allen Homra, a well-known Stuttgart civic and business leader whose life was claimed by COVID, stopped by the pop-up event. Quietly looking around at all the action and energy, she said her father would have loved the park plan, both for its beautification value and potential to bring in people and boost investment downtown.

With support from Winrock and partners, next steps for civic and municipal leaders in Stuttgart, England, Lonoke and Helena-West Helena under RPIC include securing additional grant funds for local projects, improving e-connectivity by developing broadband and mobile connectivity access, and training community leaders to implement and fund future placemaking and economic development projects.