Less than half of Nigeria’s 186 million people have access to electricity. But in the rural village of Gbamu Gbamu, newly installed utility poles and wires act as markers of a brighter future, powered by a new solar minigrid. The grid, an effort of local developers Rubitec Solar and Winrock’s USAID-funded Renewable Energy and Energy Efficiency Project (REEEP), is empowering citizens and their enterprises, providing them with a better quality of life and more stable sources of income. 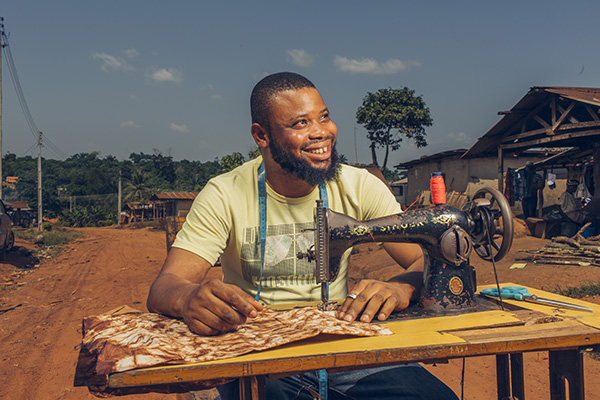 The Tailor
Lateef Jimoh knows that a certain amount of legwork is always going to be a part of his job. As a tailor, Jimoh typically takes orders from his fellow villagers in Gbamu Gbamu and then makes the four-hour round trip journey to Lagos to pick up the fabric he needs to actually create the garments. But the bumpy trips he takes twice a week on a motorcycle to pick up diesel for the generator he needs to run his six sewing machines is something he would love to eliminate. “Instead of having to travel to town to buy diesel, that is an advantage for me,” says Jimoh, who moved to Gbamu Gbamu from Ghana to be closer to family eight years ago. Besides enjoying a quieter work environment once he replaces the diesel generator with electricity from the solar-powered minigrid, Jimoh expects to have more money in his pocket. “It cuts down the expense with the power and having to travel to town to buy fuel,” he says. “It will boost my business and make me produce more.” 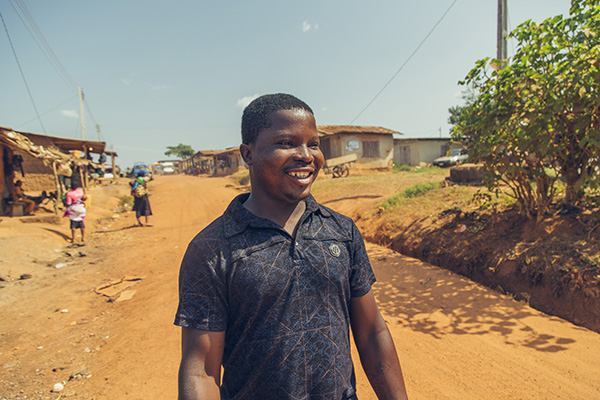 The Proprietor
As the owner of a small restaurant and hotel in Gbamu Gbamu, Olamide Olasunkanami has always relied on diesel and petrol generators to keep his guests happy. Comfort requires electricity to run the refrigerator that keeps drinks cool and to power the TV, radio, fans and air conditioner that ensures guests return again and again. But generators are expensive enough that Olasunkanami has to limit their use. “Normally, I run it from 6 pm to 12 am but today is a market day,” he says as music blares from inside the hotel. “I know many people will be around so I run it around the clock.” Olasunkanami won’t have to make those choices about turning the generator off and on at certain times once the solar-powered minigrid is in operation. For the same amount of money he spends on diesel today, he’ll be able to make electricity available to his guests all the time. “The drinks are going to get colder and people are going to enjoy the electricity because they can always watch the TV and use the fan,” he says. “If there is power always, we can build another hotel.” 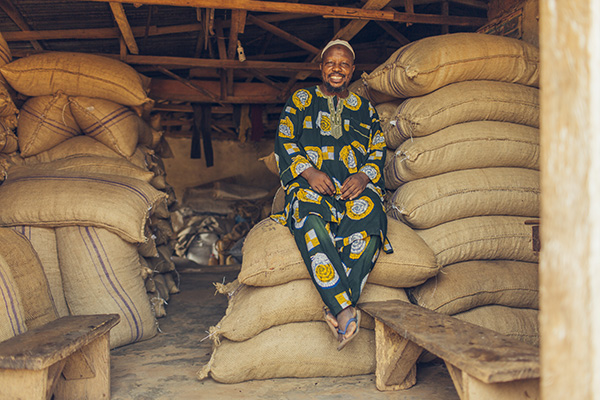 The Cocoa Farmer
Like many of his fellow villagers, Alimi Issa first came to Gbamu Gbamu to be a cocoa farmer. Through his years as both a farmer and as someone who buys cocoa beans from other local growers, Issa has learned that weather and the seasons play a big role in his success. On clear and warm days, for instance, he can rely on the sun to dry his beans while the rainy season brings the risk that they’ll spoil. But the uncertainty and risk that he’s faced for years will disappear with the arrival of the solar-powered minigrid in Gbamu Gbamu. Why? Because Issa plans to buy a machine that dries the cocoa beans, allowing him to both dry his own crops and charge other farmers to dry theirs. “I don’t need to wait for the sun to come out,” says Issa, who sells his beans to the agribusiness Olam, which ships them to Switzerland to be made into chocolate. “I buy the newer drying machine and farmers will carry their cocoa to me and I make extra money.” 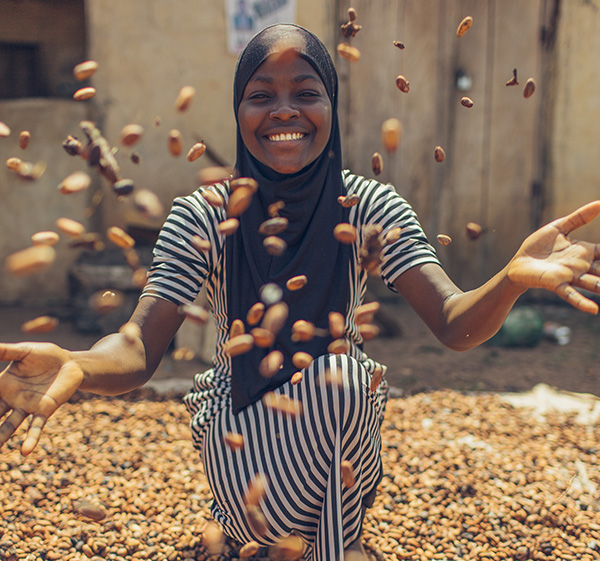 The Entrepreneur
On a sunny November day, Lawal Omowumi has ample time to show off how the large blue cocoa dryer she helps run operates. “We load about 30 sacks of the cocoa into this and turn on the generator,” she says. “It is normally used in the rainy season. But now there is nothing.” Seasons will inevitably change and Omowumi’s dryer will be in demand again, though she looks forward to no longer needing to fetch diesel to power the generator that keeps it running. Gbamu Gbamu’s solar-powered minigrid will eliminate those tiring and expensive trips. She also sees how a constant supply of electricity will keep the laptop and printer in her office running smoothly, another potential boost to her business. But while Omowumi is eager to reap business benefits, she is equally excited for the changes the minigrid will bring to Nigeria’s hot nights. “Normally, villagers sleep outside. But when there is light [meaning solar power] in the midnight they will have fans and sleep there,” she says, pointing to the interior of a nearby home. “They sleep inside and enjoy themselves.”