Preserving Water in His Homeland

Growing up in a small village along the Mekong River, Bunnara Min often found himself wandering outside during breaks in school. Lush trees surrounded the school, shading the school yard and putting him at peace. As he prepared to graduate and go to college, his father asked what he would study. Forests, Min said.

At the time, forests covered nearly three-quarters of Cambodia, acting as a sponge to collect rainfall and store it as groundwater. In a country where water availability historically whipsaws between six months of rain and six months of drought, people keenly feel the importance of trees to the ecosystem.

“In Cambodia, if you talk about forests, you cannot disconnect them from water,” Min says. His grandparents and other elders often repeated a proverb: “Where we have forest, there we have water.” 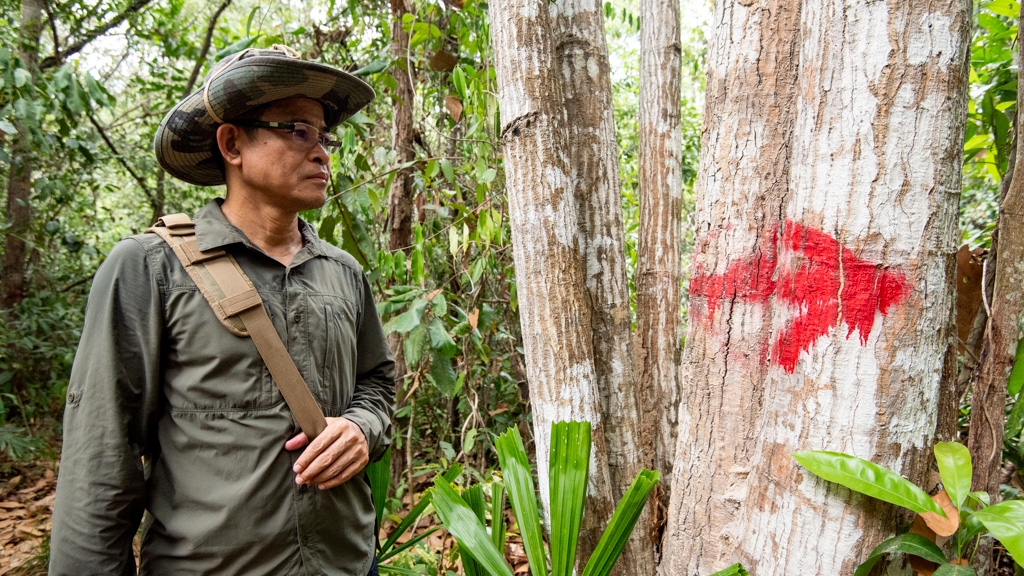 Bunnara Min observes a tree marked for cutting by illegal loggers in a forest in the upstream part of the Stung Chinit River Watershed. Deforestation in the watershed has affected water quality and availability downstream. Photo by Jeremy Holden.

After a decade away, in which he earned degrees from the Dresden University of Technology in then-Soviet East Germany – one in hydrology and forest science, and a second in business administration and management – Min returned to his homeland to work in forests. What he found guided him inevitably to the question of water.

Forest cover has declined from 73 percent in 1965 to 45 percent as of 2016, according to the government’s statistics. Even though it rains half the year, Cambodia faces increasing challenges to water security due to deforestation, as well as climate variability and water pollution. Today, Min is the team leader for the USAID-funded Sustainable Water Partnership’s (SWP) water security improvement work in Cambodia. This work is focused in the area surrounding the Stung Chinit River, a major tributary of the massive Tonle Sap Lake, the life-giving heart of central Cambodia.

Conditions in the Stung Chinit River Watershed mirror Cambodia’s broader water security challenges. In the upstream areas of the watershed, community forestry groups who harvest rattan wood and resin have seen their livelihoods affected by land concessions that cleared trees for new rubber, cashew and cassava plantations. With fewer forests to preserve groundwater aquifers, water levels in the Stung Chinit River have declined, placing strain on farmers in midstream areas who grow rice during the dry season. Further downstream, reduced flows and pollution from upstream farms and mining operations have hurt populations of fish, which are relied upon by community fishery groups for food and supplemental income. 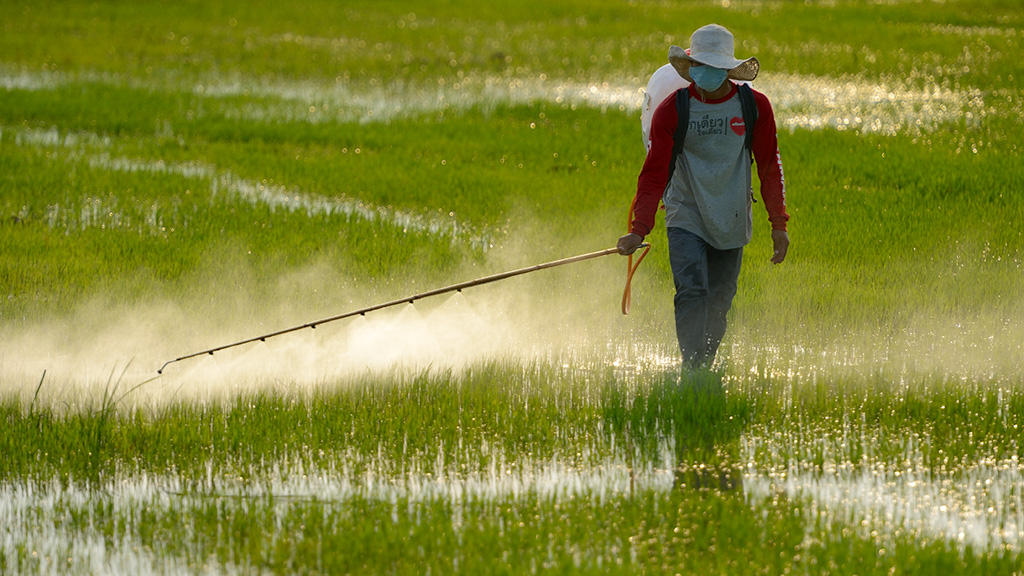 A farmer sprays his rice field with pesticides in the midstream area of the Stung Chinit River Watershed, where dry-season rice farming is common. Sometimes, pesticides and fertilizers get into the river and canals, polluting areas downstream. Photo by Jeremy Holden.

“People need water to drink, and they need water to do their farming,” Min says. “Look at the other resources like fisheries. Fish need water. Without water, there will be no more fish in the rivers.”

In response, SWP is facilitating a water security improvement process by engaging water users at the local level – farmers, fishermen and forestry groups – as well as private industry and government officials at the commune, provincial and national level.

“Our purpose is to help to reduce the impact,” Min says. “We know the impact is there already, we cannot stop it, but our role is to… help mitigate the impact for the future.” 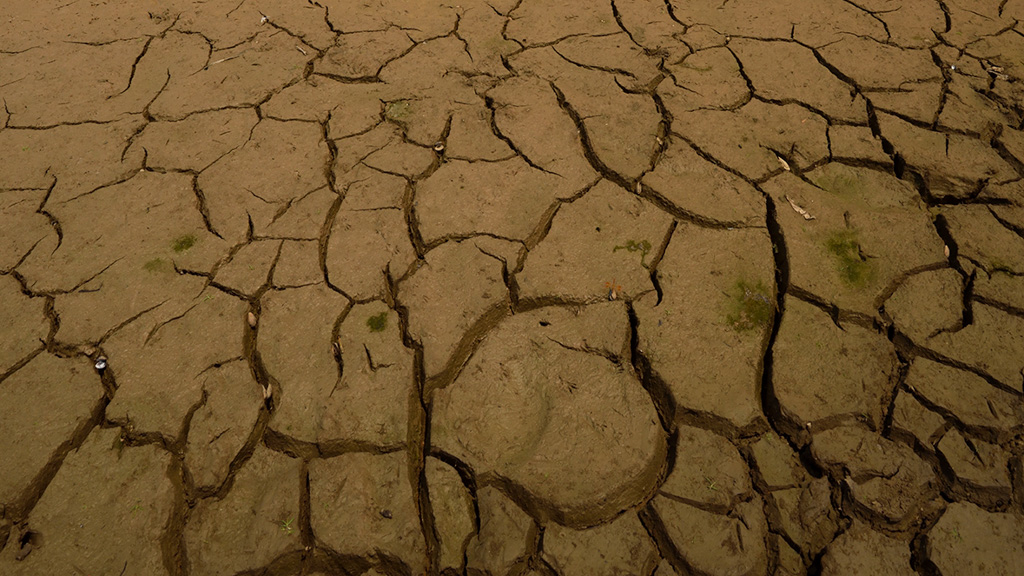 Mitigating the effects of deforestation and climate variability in the Stung Chinit River Watershed depends on educating the competing users of water in the region, Min says. Each water user group must understand how what happens upstream affects people elsewhere in the watershed.

SWP helped assemble a river basin management committee, comprised of local water users, industry and government officials. The goal is for the committee to sustain itself beyond the life of the SWP project, serving as a forum in which water users can resolve differences and make long-term plans to enhance the ability of all residents of the region to access the water they need. 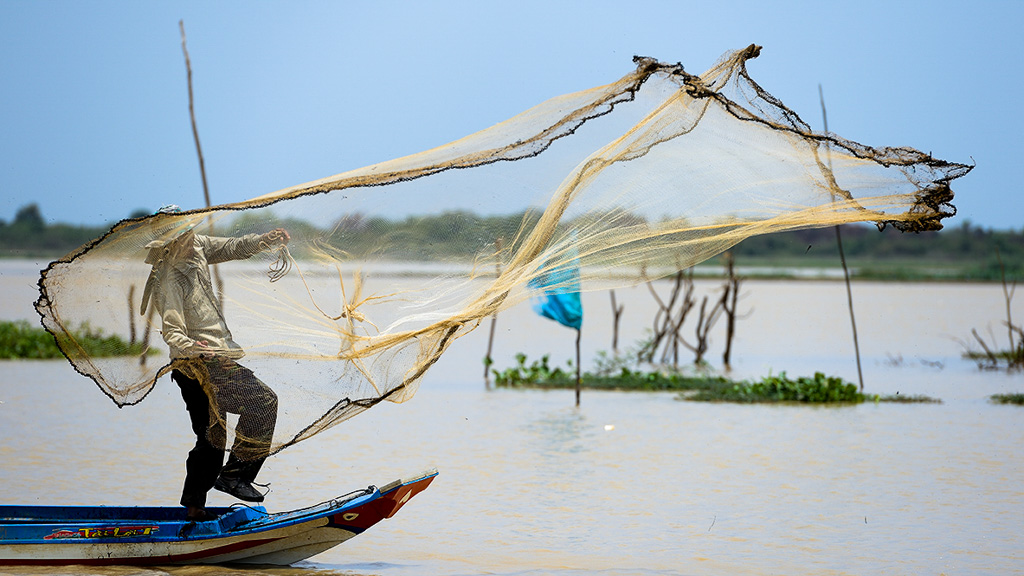 A fisherman casts a net in a lake at the downstream area of the Stung Chinit River Watershed. Fishermen here rely on fish for food and supplemental income, but upstream deforestation and pollution from pesticides, fertilizers and mining interests have reduced the quality and quantity of water downstream. Photo by Jeremy Holden.

For that to happen, Min says it will require the cooperation of every group of people who use water. “We have to be together in order to improve the water security here in the Stung Chinit Watershed,” Min says.

Heeding the words of his elders, Min is working with the people of this watershed toward a sustainable future where water may always be found.