How new shrimp farming methods are transforming lives in Bangladesh

In the village of Jogindranagar, Shyamnagar, in the Satkhira district of Bangladesh, young men often spend six months a year away from home and family, toiling in the brick fields. It’s difficult work, dusty and dangerous, but the men keep returning because they can earn up to 200,000 BDT (more than $2,300 USD) to supplement what they eke out of fields and ponds. Working in the brick fields — or in construction or at other jobs that take them far from home — can make all the difference during the lean winter months.

But there are fewer Jogindranagar men leaving home since Winrock’s USDA-funded Safe Aqua Farming for Economic and Trade Improvement (SAFETI) project began. Instead, they’re working near their homes all year long, tending shrimp ponds that are an important part of lives and livelihoods in many parts of Bangladesh. SAFETI provides shrimp and prawn farmers in the region with access to finance and training, helping them boost their incomes so they don’t have to leave their families to make ends meet.

To bring this about, SAFETI, like many projects, depends on early adopters, people who embrace new methods before others do. Shrimp farmer Md. Hizbullah is one of those people. He used the new methods so thoroughly and so successfully that he not only improved his own life but the lives of those around him.

Before SAFETI, Hizbullah practiced traditional shrimp and dairy farming, using the methods he learned from his father. He supplemented the family income by working for a construction company. But Hizbullah was interested in perfecting his shrimp farming skills, so when SAFETI conducted trainings in the area, Hizbullah signed up. “I learned the six key steps of successful shrimp farming, and this created a hope in my mind that I can be successful.” Hizbullah says. 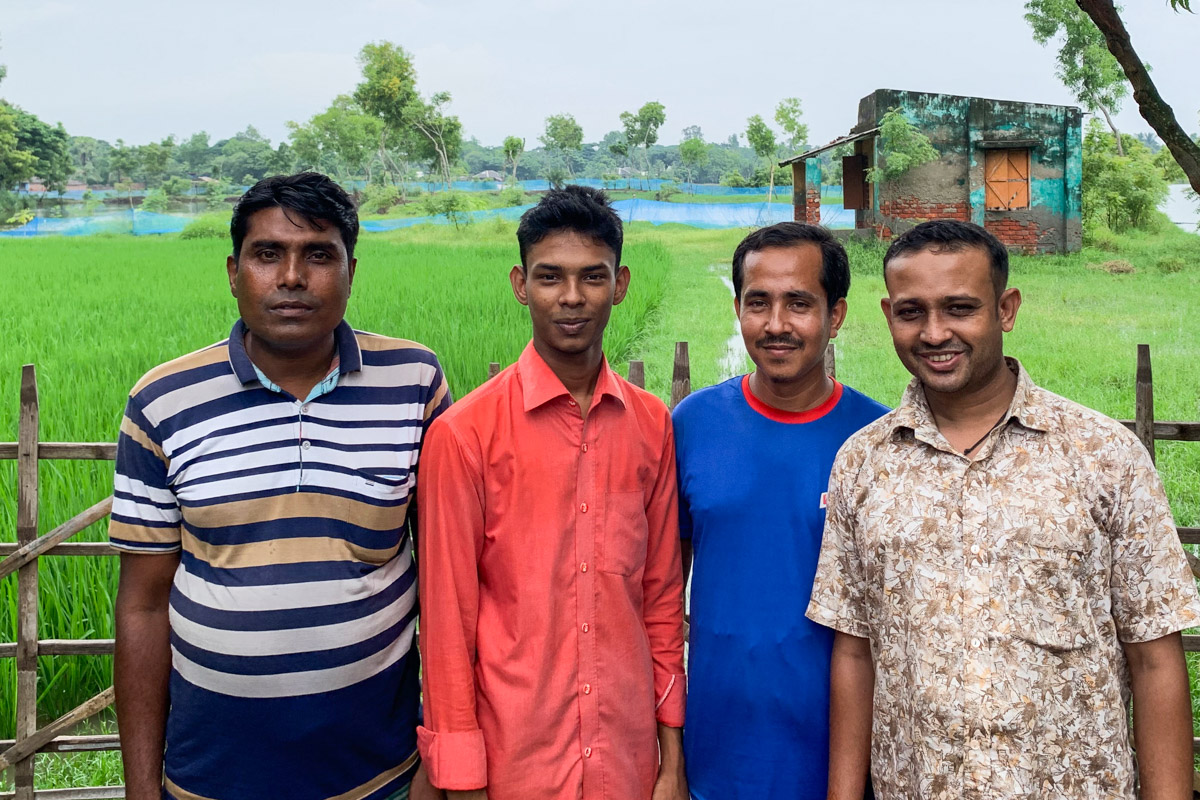 Hizbullah decided to follow SAFETI’s advice: he increased the water depth in his pond by removing the black layer of soil on the bottom, filtered the water through a 500-micron net, applied calcium oxide, installed blue net fencing for biosecurity, and treated the water with bleaching powder, prebiotics and probiotics. Then he stocked the pond with specific pathogen-free shrimp post larvae (SPF PL) and started using good quality feed and agricultural lime.

These were not easy changes to make; they were expensive and time-consuming. (Although the project provided a few key inputs, farmers are required to shoulder 70 to 80 percent of the upfront costs.) But Hizbullah persisted. “I decided to invest in this new technology,” he says. “Seeing my interest and willingness to invest, SAFETI selected me as a demo farmer.”

At first, fellow shrimp farmers had doubts about their friend Hizbullah. “The other farmers used to tell me that it is not possible to harvest this huge amount from this small demo pond,” he says. But Hizbullah had faith. After his first successful harvest, he knew he was onto something; after his second — a profit of more than $550, his best haul in nine years of shrimp farming — neighbors began to pay attention. 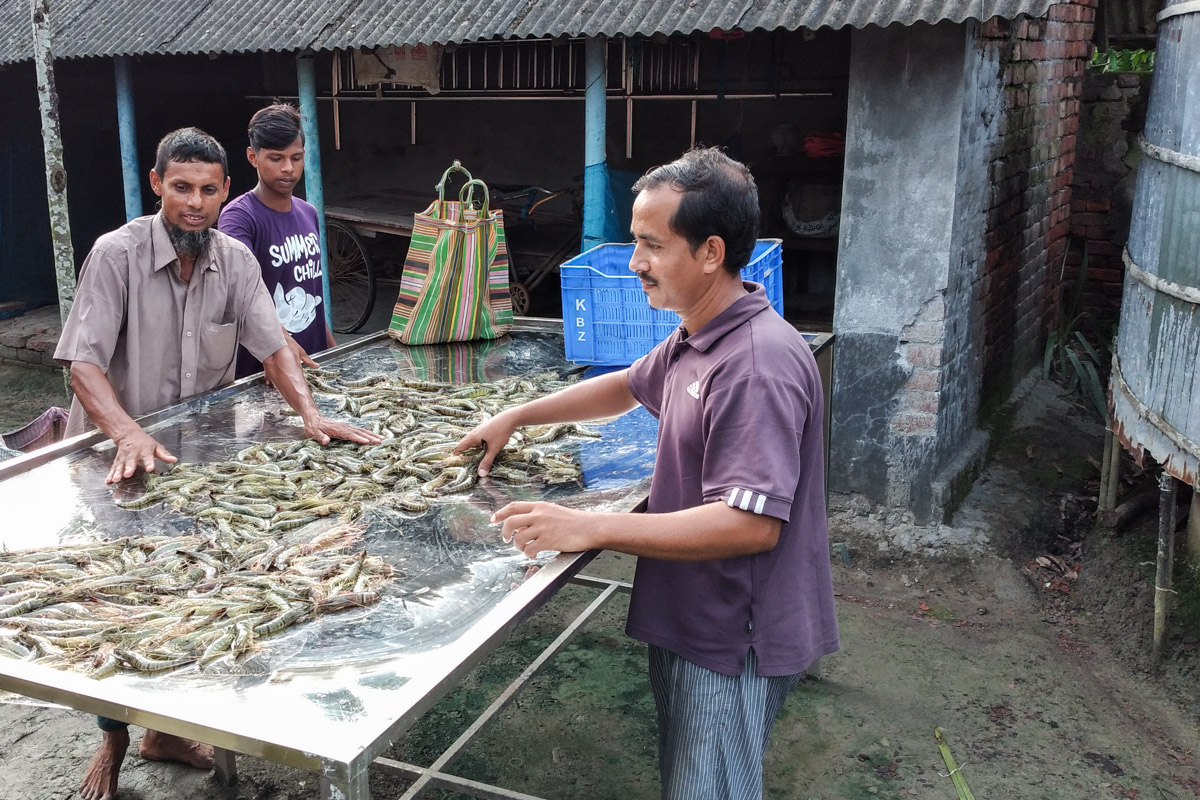 “Many interested people of my area used to come to see my harvest,” Hizbullah says. “They became interested to follow this technology. But they used to say that this needs a big investment and is difficult to do alone.”

A solution began to take shape in late 2018 when 50 farmers came together to form the Semi-Intensive Shrimp Farmers’ Association with Hizbullah as advisor and mentor. (In Bangladesh, semi-intensive refers to a type of shrimp farming that is done without aeration and other costly equipment that requires electric power.) “We had some conversation that I remembered,” Hizbullah recalls. People asked questions such as, “How would we manage money? What would happen if the shrimp died? Will we be successful in producing shrimp? How will the money be distributed among the members?” 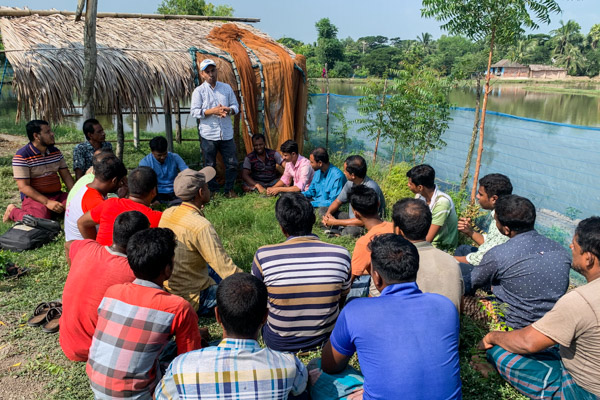 Eventually, the farmers came up with answers. Half of the original group pooled their money to raise shrimp in four ponds covering about three and a half acres. They estimated the total cost of production, divided it into equal shares and put forward the initial capital. The group decided to pay two of their members to work full time in the ponds, feeding stock and taking care of production. Other members help them from time to time.

In early 2019, this group began to follow SAFETI’s methods in their four ponds. After just one season they were able to raise 788 kilograms of shrimp and sell them for BDT 551,000 ($6,378), a significant profit after just one season. Fifty percent of this total was distributed equally among the members and the rest was deposited in a group account to use in the next farm cycle.

As word of their bountiful harvest began to spread, members of the Semi-Intensive Shrimp Farmers’ Association acquired scores of new members and six new ponds. Many of those in the original group of 52 wanted to be directly involved, and others, some who had never worked with SAFETI before, asked to join. In some ponds, they cultivate prawns and carp as well as shrimp; with others, they grow winter vegetables along the banks. 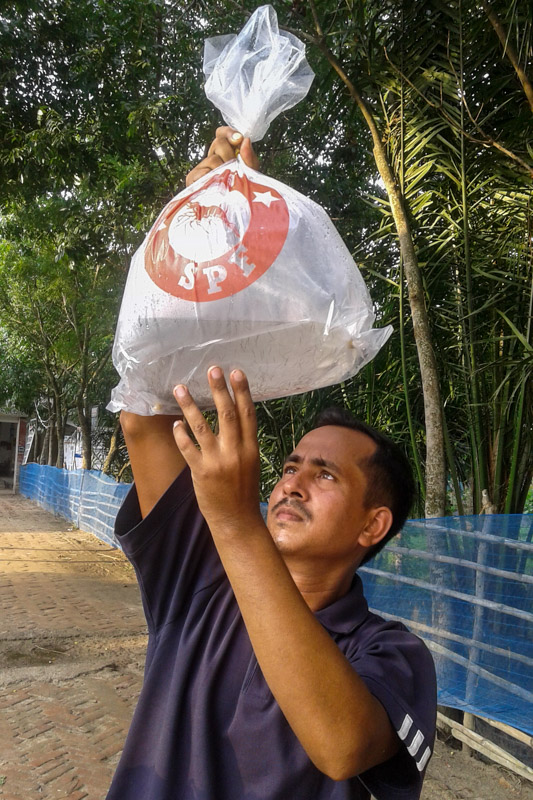 There are now 75 members in the Semi-Intensive Shrimp Farmers’ Association. Hizbullah continues to offer guidance — and his business continues to thrive. In 2019 he upped production by 42 percent. He no longer has to work for a construction company and has built a brick house for his family. He has also expanded his operation by creating a separate pond where he nurses shrimp post larvae for up to 30 days, which gives him more control over the process.

“The transformation of the Bangladesh shrimp sector requires a shift from traditional to modern science-based practices,” says John Dorr III, SAFETI’s chief of party. “This group-based approach of young entrepreneurial farmers will help lead the way for thousands of new future farmers. SAFETI salutes the success of the Semi-Intensive Shrimp Farmers’ Association.”

As for the farmers themselves, “they used to work in the field for six months in a year and it was difficult for them to stay away from family a long time. But now, they are able to work staying at home with their family,” Hizbullah says. “They are financially more benefited in shrimp farming than working in the brick fields.”

Anik Mahmud is one of those who used to endure hazards and hardships to put food on his family’s table. “Before we had to work very hard in the brick field,” he says. “Joining this association gave me a great relief as I can stay home with my family.”

Hizbullah’s example has now spread beyond Shyamnagar to neighboring farmer groups in the Satkhira and Khulna districts of Bangladesh. Hizbullah hopes it will continue to expand. “This experience has had a positive impact in my life,” he says. “I hope that the other farmers of our village will be encouraged to see our success and follow SAFETI’s farming methods — and that they will be successful, too.”

Almost 25,000 farmers in 1,000 groups have become part of the SAFETI project. For more information, visit https://winrock.org/project/safeti/