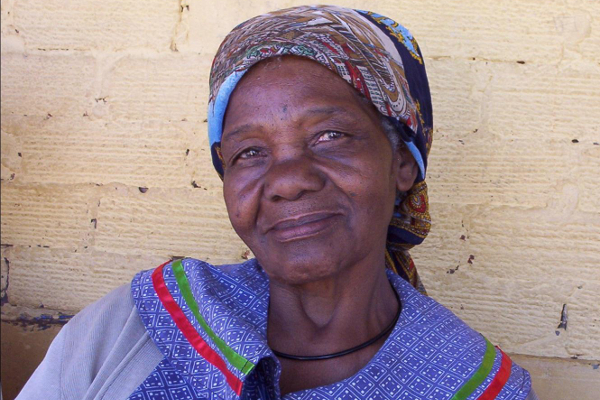 In AIDS-affected communities in southern Africa, grandmothers often assume responsibility for children who have been orphaned by the epidemic. The U.S. Agency for International Development-funded AMBASSADORS GIRLS SCHOLARSHIP PROGRAM (AGSP) alleviates some of the financial burden on these grandmothers by offering scholarships to their grandchildren. Because the grandmothers are often too old to work, the scholarships make a big difference by covering uniforms, books and school supplies, and tuition when necessary.

In South Africa, Winrock partners with local nongovernmental organization, Heartbeat, to deliver scholarships to hundreds of orphaned and vulnerable primary-school children in Free State Province. A Winrock representative recently gathered some of the grandmothers together to discuss the impact of the program on their lives.

Elsie is very sick and cares for three grandsons, two of whom are orphans. The youngest grandson, Le-bohang, is 14 and is in grade six or seven. His mother is too sick to care for him. The other two grandsons, who are orphaned, are Siyabulela, a 16- or 17-year-old who is in grade 11, and Tokelo, who is 25 and works in construction. The three grandchildren have been with Elsie since they were toddlers. They have received blankets, maize meal and food, and Le-bohang has an AGSP scholarship. Elsie finds it hard to control him and reported that he only listens to his mother. Apart from the scholarship, Elsie participates in Heartbeat’s “granny support group,” in which the women sew and talk about ways to handle difficult children, a common challenge among the grandmothers.

Paulina bears a tremendous burden, caring for a total of 11 grandchildren. She has three daughters; two are dead and one is very sick. Of her grandchildren, the eldest is 20 and the youngest is 7. One of the children, Matsiliso, is receiving an AGSP scholarship; she is 9 years old and is in grade four. Matsiliso suffered greatly when her parents died only one day apart: her mother on Nov. 28, 2004, and her father on Nov. 29, 2004. She is quiet and withdrawn. She contracted tuberculosis and was quite sick, but was treated and has since recovered. However, she has found it hard to recover from her mother’s death. Her brother also has had a difficult time. Matsiliso did receive counseling, and her brother came to Heartbeat to talk to the staff there. As for Paulina, she prays a lot to help her come to terms with her losses.

The grandmothers believe it is important for the children to learn about their culture so they can pass it onto their own children. They appreciate the traditional songs and dances that the children learn at the center. According to the women, the center also prevents the children from going to the “bottle store” (liquor store). Dimakatso and the other grandmothers feel that the kids are safer at the ASC and report being very satisfied with the services offered through AGSP.