According to the U.S. Department of State’s (USDOS) 2019 Trafficking in Persons report, Jamaica has made significant progress in fighting human trafficking, including investigating and prosecuting more traffickers and publishing its first annual report on human trafficking in Jamaica. However, Jamaica remains a Tier 2 country within the USDOS ranking system (with 3 being the worst), meaning that its government does not fully meet the Trafficking Victims Protection Act’s minimum standards but is making significant efforts to do so.

Child trafficking, including commercial sexual exploitation and hazardous forced labor, is one of the worst forms of child labor. The United States Department of State and the Government of Jamaica (GOJ) signed a compact in May 2018 to jointly prevent and respond to child trafficking in Jamaica, prioritizing specific recommendations to increase victim identification and standardize referral procedures so that law enforcement, child protection officers, healthcare workers and NGOs can refer all suspected victims to residential care and comprehensive protective services.

Through the State Department-funded Jamaica-U.S. Child Protection Compact (CPC) project, Winrock International and its partners Lawyers Without Borders, University of the West Indies and the GOJ are working to fight child trafficking in Jamaica by helping authorities identify child victims and streamlining the referral process to better connect exploited children with the shelter, legal, medical, psycho-social, education and other assistance they require.

“To improve the identification of victims and reveal their traffickers, Winrock and partners developed a screening tool that has been customized for the specific needs of multiple stakeholders, including: Child Protection and Family Services Agency, Ministry of Health, Passport Immigration and Citizenship Agency within the Ministry of Foreign Affairs and Foreign Trade, Ministry of Labour and Social Security, Centre for Investigation of Sexual Offences and Child Abuse, Department of Corrections, Justices of the Peace, and NGOs,” says Stephanie Lillegard, program officer at Winrock International. “The screening tool outlines behavioral, situational and health factors that indicate a child is being exploited.” 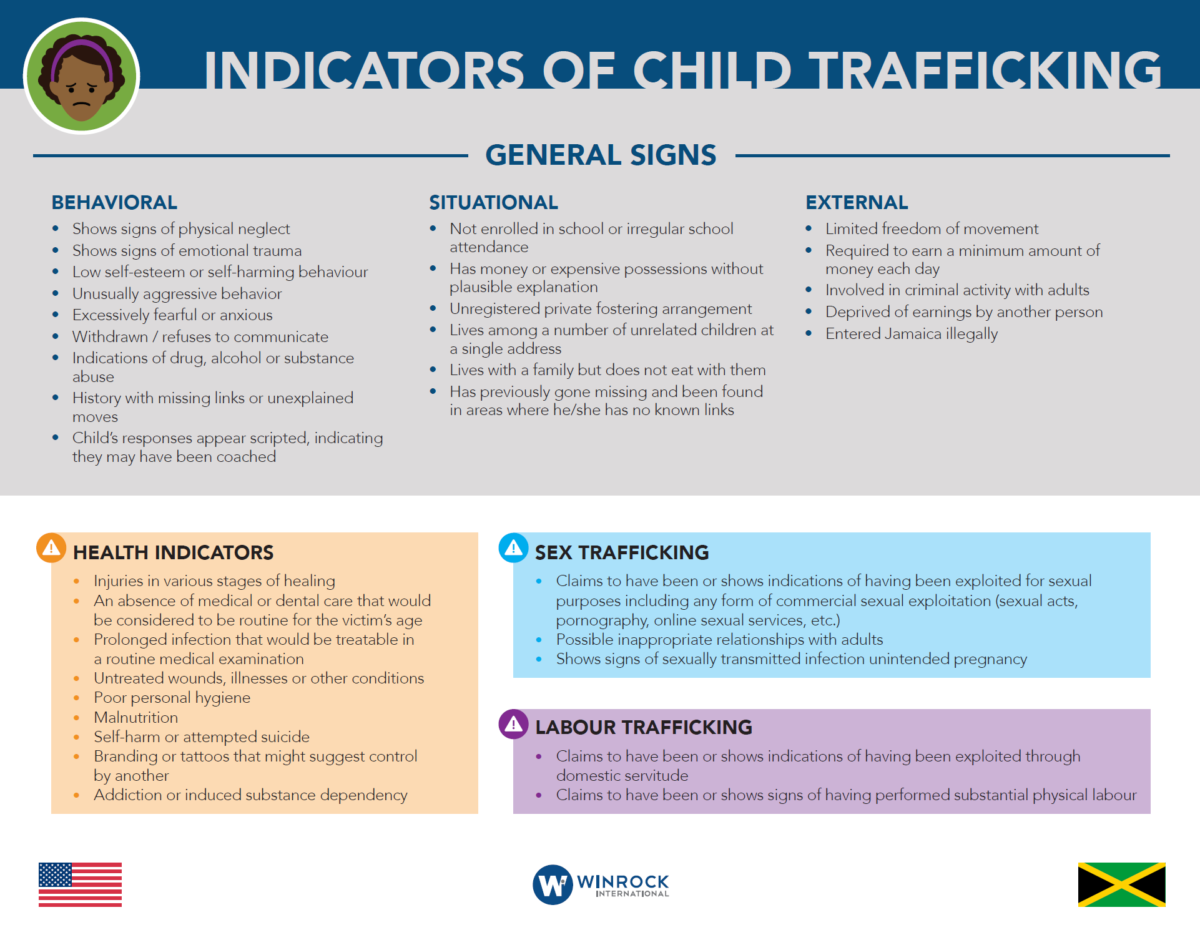 In addition to the red flags that indicate trafficking, the screening tool includes specific questions to ask suspected victims to uncover potential abuse. Variations of this screening tool are customized for the needs of multiple government agencies to better equip Jamaican authorities to identify victims and catch traffickers.

To improve victims’ quality of care and access to services, Winrock and partners have trained 145 children’s protection officers and other GOJ officials and, in partnership with Jamaica’s National Task Force on Trafficking in Persons, developed a National Referral Mechanism (NRM) on child trafficking in Jamaica. The NRM streamlines the process for connecting trafficked children with critical services and strengthens coordination among government agencies, law enforcement and service providers. It also improves efficiency of victim care, ensures that the rights of children are protected and sets benchmarks to gauge future progress.

Through the Jamaica-U.S. CPC project, the State Department, GOJ, Winrock and partners are supporting government officials and service providers to more effectively identify child trafficking and respond in a way that is suited to the needs of each child and to encourage the participation of the child in the decision-making process. Winrock works with the GOJ to ensure that anti-trafficking policies and services are responsive to and considerate of the unique physical, social and emotional impact that victims of trafficking experience. Together with the GOJ and civil society actors, the Jamaica-U.S. CPC project is standardizing protocols, referral procedures and data collection for a coordinated response to child trafficking.