Seeds of Hope in Bangladesh

Southwest Bangladesh is a watery world. Houses perch on steep river banks. Storms pummel fragile coastlines. It’s hard not to see this starkly beautiful place as engaged in a battle between water and land — with the water winning. But the land has a new ally, a living hem of mangrove forests made possible by Winrock International’s Climate Resilient Ecosystems and Livelihoods (CREL) project, funded by USAID.

Mangroves are trees and shrubs that tolerate salt water and thrive in wetlands. They slow wave action, a major cause of erosion, and buffer the land against tides and typhoons. But these aren’t just any mangroves. They sprout from local seeds collected from the nearby Sunderbans, the largest mangrove forest in the world. They are nurtured in local nurseries and tended by people (6,600 of them to be exact, benefiting a total of 175,000) who might otherwise be combing protected areas for firewood and food. 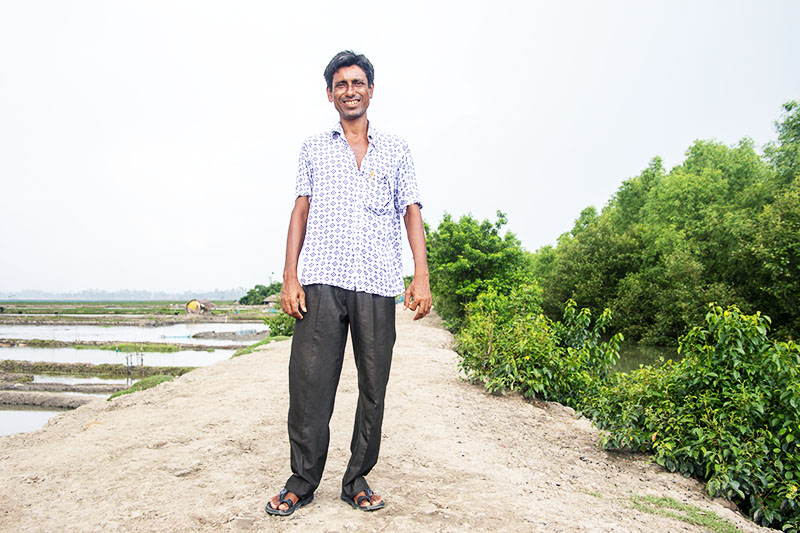 Saiful Alam was an early champion of mangrove forests to protect his village in southwest Bangladesh. “So long as I live, I will keep planting trees,” he says. Photo by Misty Keasler

The mangrove restoration program began in 2014, when CREL distributed 200,000 saplings to teams of villagers who planted them along eroded river banks during low tide, protecting the young trees with fences so they could grow to maturity. CREL has transformed almost 450 hectares that way, creating a border of green around once brown and barren banks. And this is just part of CREL’s reach — the project works in four ecosystems and three ecologically critical areas of the country, and has created diversified incomes for 500,000 people and 50,000 households.

Saiful Alam belongs to a community patrol team that planted saplings along the steep riverbanks of the Koyra region. You might call him a mangrove visionary. “One day I was sitting next to the river, and I saw these small plants, saplings, settling on their own, and that gave me the idea that if we could protect these plants, they would grow,” Alam explains. Alam became one of CREL’s staunchest supporters. “The trees are protecting this embankment,” he says. “So as long as I live, I will keep planting trees.”

It’s a wise decision backed by research. As part of its pioneering mangrove valuation team, scientists sponsored by the John D. Rockefeller 3RD Scholars Program (a grant-making initiative that builds on the work of one of Winrock’s founding organizations, the JDR3-founded Agricultural Development Council), is currently working with the CREL project to evaluate the protective value of mangrove forests. Preliminary findings show that one kilometer of intact mangrove forest can save an average of $181 per household (annual per capita income in Bangladesh is $1,466), based on the protection it provides land and property during typhoons and storm surges. 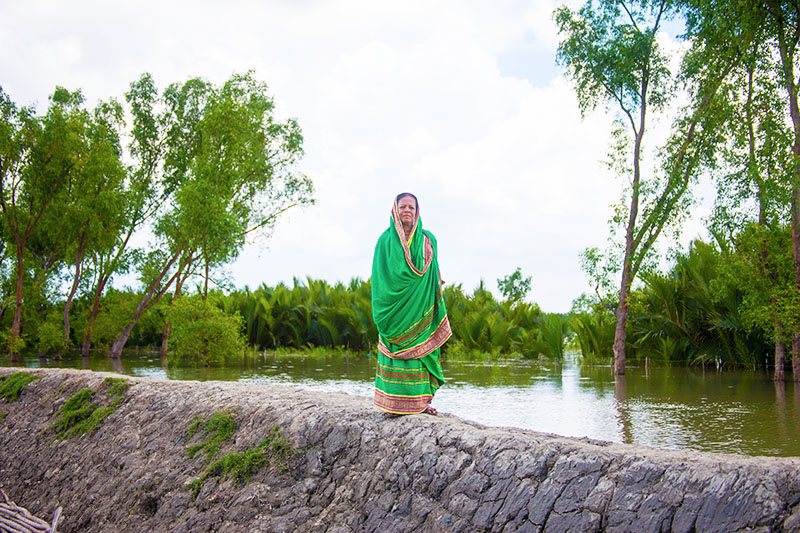 “If we don’t have trees, we are flooded,” says Bharati Rani Bishwash of Koyra, who was left homeless after a typhoon in 2009. Photograph by Misty Keasler

Sobeda Begum is a member of a village conservation forum on the island of Gabura, a short boat ride from Koyra. In the beginning, she says, planting and protecting the trees occupied much of her day. Now she spends only a few hours a week checking on them, shooing away goats who eat the bark and even locking up repeat offenders in a pen. (Owners must pay to retrieve their animals.)

Another problem faced by the young plants is the collection of shrimp fry, which happens in the same shallow waters where mangroves thrive. Harvesting shrimp fry is illegal, but is one of the few sources of income for people who have no land. The CREL project has helped there, too, providing such alternative income opportunities as instruction in aquaculture, vegetable growing and weaving baskets to sell in the market. The mangroves themselves provide food: they’re a habitat for crab, shrimp and fish, and their fruit can be used to make a spicy pickle relish. “I’m very proud that the trees I planted bore fruit,” Begum says, pointing to a stand of mangroves by the shore.

Mizanur Rahman, another member of Gabura’s community patrol group and president of the Ghagramari village conservation forum, says the mangroves have brought back plant and animal life — including a colony of cranes and hives of bees. CREL worked with honey harvesters in the area, too, introducing them to new ways to collect, store and test the quality of the honey. 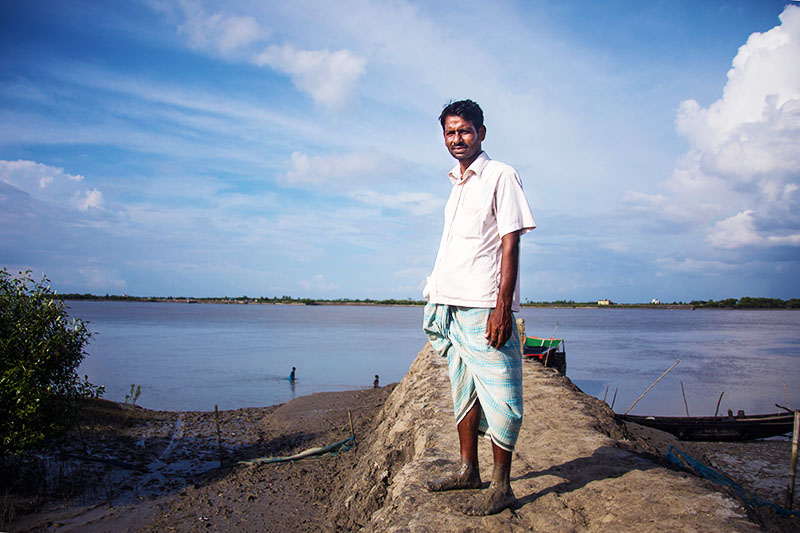 “I’m taking care of the trees now,” says Mizanur Rahman, president of a village conservation forum on the island of Gabura. “And in time the trees will take care of me.” Photograph by Misty Keasler

Back in Koyra, Bharati Rani Bishwash and others worked with CREL to plant nipa palms in the river along the steep bank. Like mangroves, nipa palms control erosion, and these plants are now big enough that Bishwash can make brown sugar out of their fruit and thatch her roofs with their fronds. This keeps her and others out of the protected Sunderbans forest, where they used to collect thatching and firewood — a dangerous occupation that left a number of “tiger widows,” women whose husbands were killed by the Bengal tigers that still stalk the area.

What Bishwash likes best about the palms is that they have become a living barrier — and in Koyra, this matters. “During Typhoon Aila I had to stay 11 months on the road because of flooding,” Bishwash says, describing the May 2009 storm that killed more than 300 people in Bangladesh and left a million homeless. Bishwash is hoping she’s never again at the mercy of a storm or flood — and the new trees give her hope.  “I will keep on planting the trees because I live next to the river,” she says. “If we don’t have trees, we are flooded.”

It’s a view that many Bangladeshis share: “I’m taking care of the trees now,” says Rahman, “and in time the trees will take care of me.” 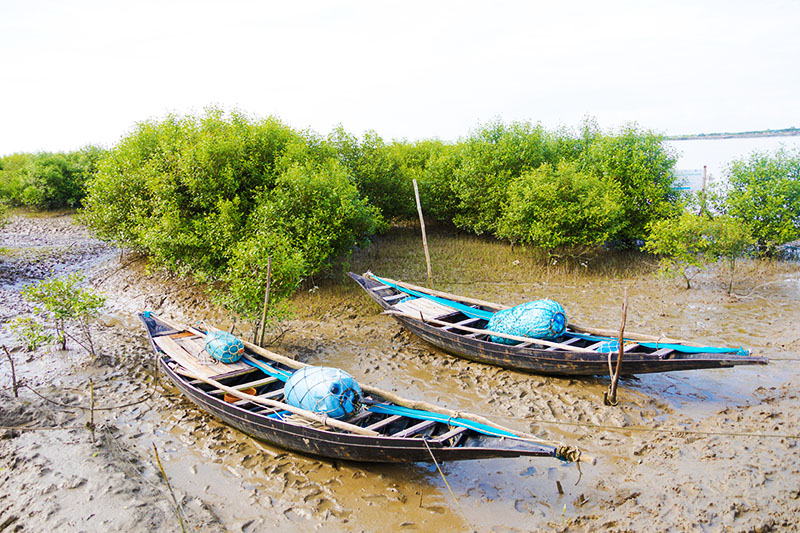 Boats among the mangroves at low tide. Winrock’s Climate Resilient Ecosystems and Livelihoods project, funded by USAID, has transformed almost 450 hectares with mangrove trees that buffer the land. Photo by Misty Keasler