“People who love the delta, who are committed to it, want to see its growth, and have got great ideas… that will be the growth factor of the future that will outpace any industry that we’re able to recruit to the delta,” Hutchinson said.

The governor joined Winrock International President and CEO Rodney Ferguson and Delta Regional Authority (DRA) Co-Chairman Chris Caldwell at the Clinton Presidential Center on April 17 to address eight Delta I-Fund alumni companies as they showcased their innovations and successful business models to angel investors and other leaders in the business, government and nonprofit sectors. 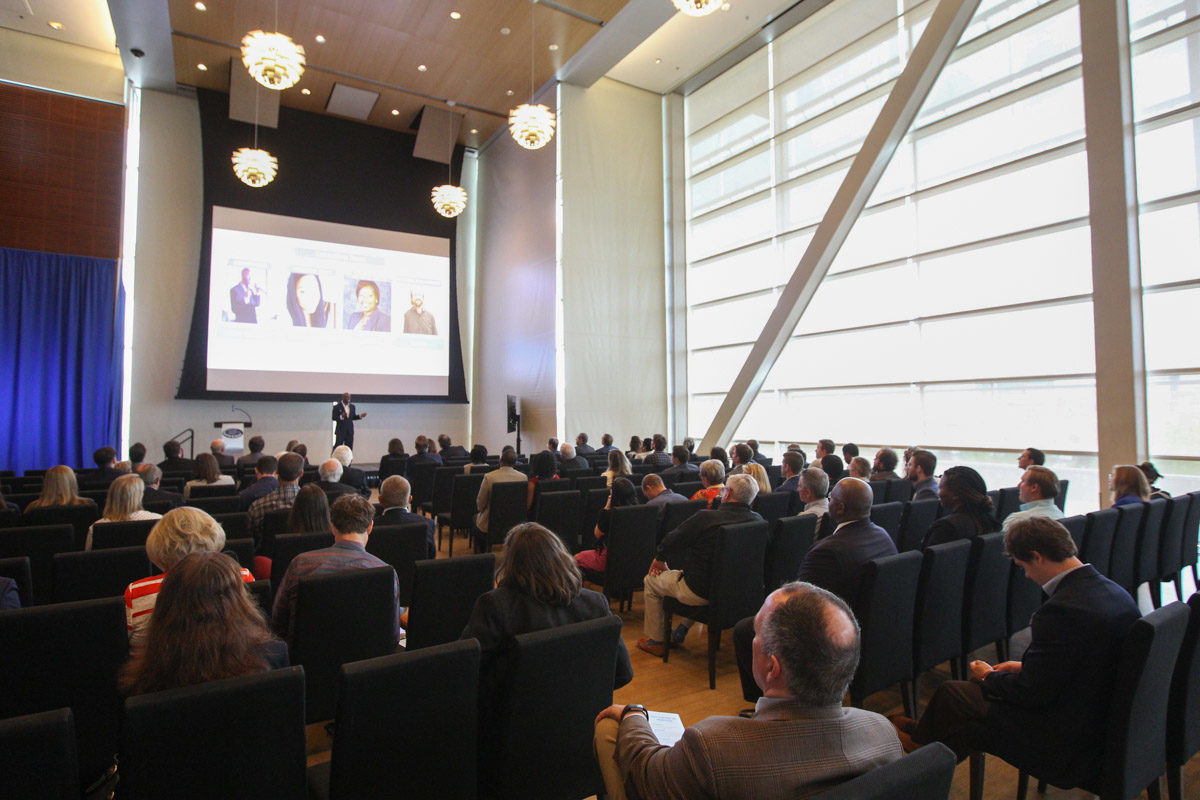 Alumni of the Delta I-Fund startup accelerator present on Demo Day April 17, 2019, at the Clinton Presidential Center in Little Rock, showcasing their progress before an audience of angel investors and leaders in the business, government and nonprofit sectors. Photo: Jacob Slaton

Funded by the DRA and administered by Winrock, the Delta I-Fund is an early-stage, proof-of-concept startup accelerator formed to train entrepreneurs in the eight-state, 252-county/parish territory of the DRA. Each startup team accepted into the program is matched with a mentor and completes 12 weeks of rigorous business training. Participating entrepreneurs receive technical assistance, including market research, prototype development and patenting assistance.

In March, the Delta I-Fund began training with its seventh cohort. To date, the program has supported 166 delta entrepreneurs. 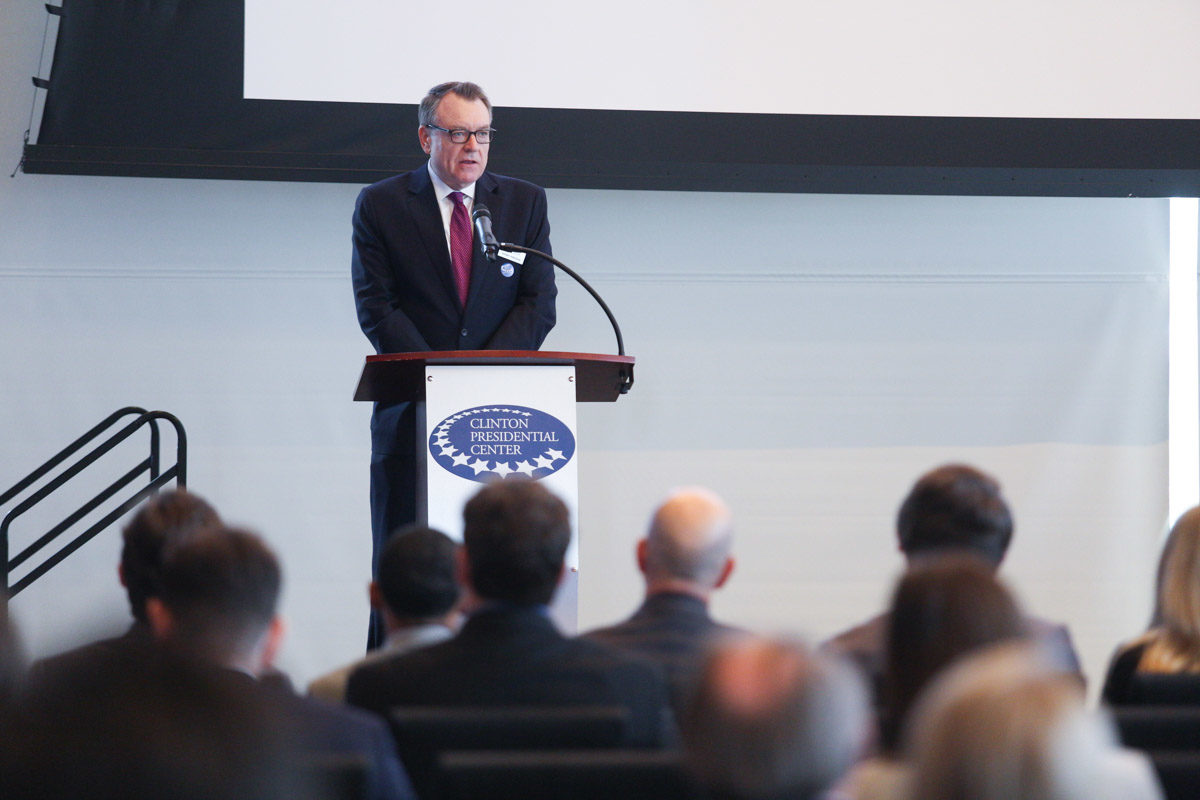 One Delta I-Fund graduate is Rejuvenix Technologies, a Little Rock-based company that has devised a way to reduce the destructive side effects of chemotherapy by targeting individual cancerous tumors. The judges at Demo Day selected Rejuvenix to receive $10,000 in technical assistance, which the company founders plan to put toward their goal of conducting a Phase I clinical trial for the technology.

“Our mission is to save lives by transforming existing cancer drugs to improve their effectiveness and decrease side effects,” said Dr. Amanda Stolarz of Rejuvenix.

Above: Delta I-Fund entrepreneurs speak about how the assistance and mentorship they received during the accelerator program has affected their startups.

The I-Fund would not be possible without the support of the DRA, which under Caldwell’s leadership has invested nearly $26 million in 90 projects across the region, helping create and retain 5,200 jobs, train nearly 9,000 workers and improve life for 160,000 families. Those investments are crucial, as Caldwell noted that 79 percent of venture capital funding in 2018 was spent in California, Massachusetts and New York, creating a challenge for tech entrepreneurs elsewhere.

“The margins are a lot smaller for our entrepreneurs. They don’t have the support to give up and try again,” Caldwell said. “So I believe that this program, and the Delta I-Fund and the folks at Winrock, have created a model that I hope we see replicated in other parts of the country.” 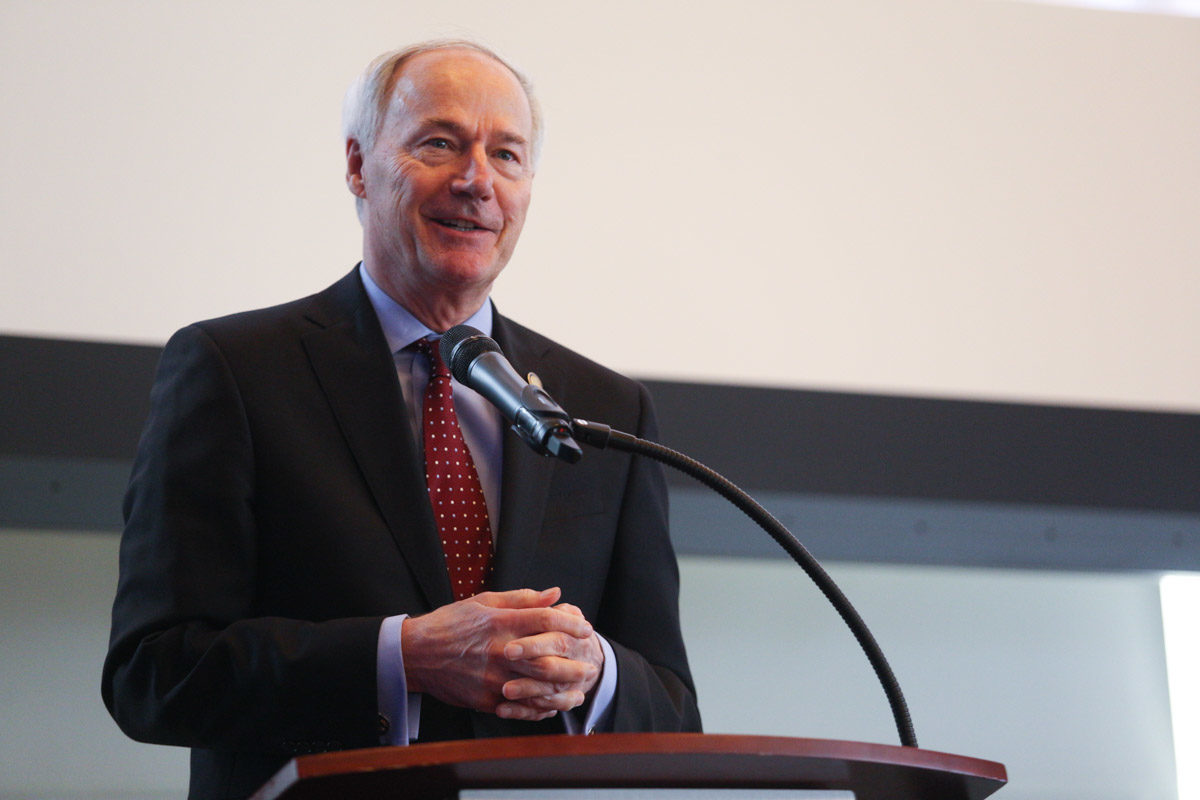 Winrock and the DRA are “kindred spirits,” Ferguson said, noting that for decades Winrock has worked to create jobs, connect entrepreneurs with markets, and improve their skills in order to provide better opportunity. That ethos has driven Winrock projects in places as far afield as Nepal, where it helped women purchase electric vehicles and earn livelihoods as drivers, and Cambodia, where it developed an app to help labor markets prevent human trafficking.

But nowhere is Winrock prouder of its work than in Arkansas, Ferguson said, its headquarters and the home of its founder, Winthrop Rockefeller. Assisting startup founders in the region, who may not enjoy the built-in advantages offered in other areas of the country, is just the latest way in which Winrock is fulfilling its mission.

“It’s a lot easier to have sweat equity in Silicon Valley than it is in Helena, Arkansas, or other places where you have to work a lot harder to connect to those resources,” Ferguson said. “Thanks to the support of the Delta Regional Authority and the state, we’re able to give these people a sense that they’re not alone.”

Above: Click to view a livestream of the Delta I-Fund’s 2019 Demo Day at the Clinton Presidential Center on April 17 in Little Rock, Arkansas.

An audience vote also resulted in a $1,000 prize for Staley House, a Helena, Arkansas-based startup that has developed a Class 1 medical device called the FreeArm, which holds feeding pumps and bags used for bolus feeding. Founders Misti and Will Staley conceived the idea after their infant son, Freeman Ellis Staley, struggled with heart and lung complications before he died at Arkansas Children’s Hospital in Little Rock at 10 months of age. 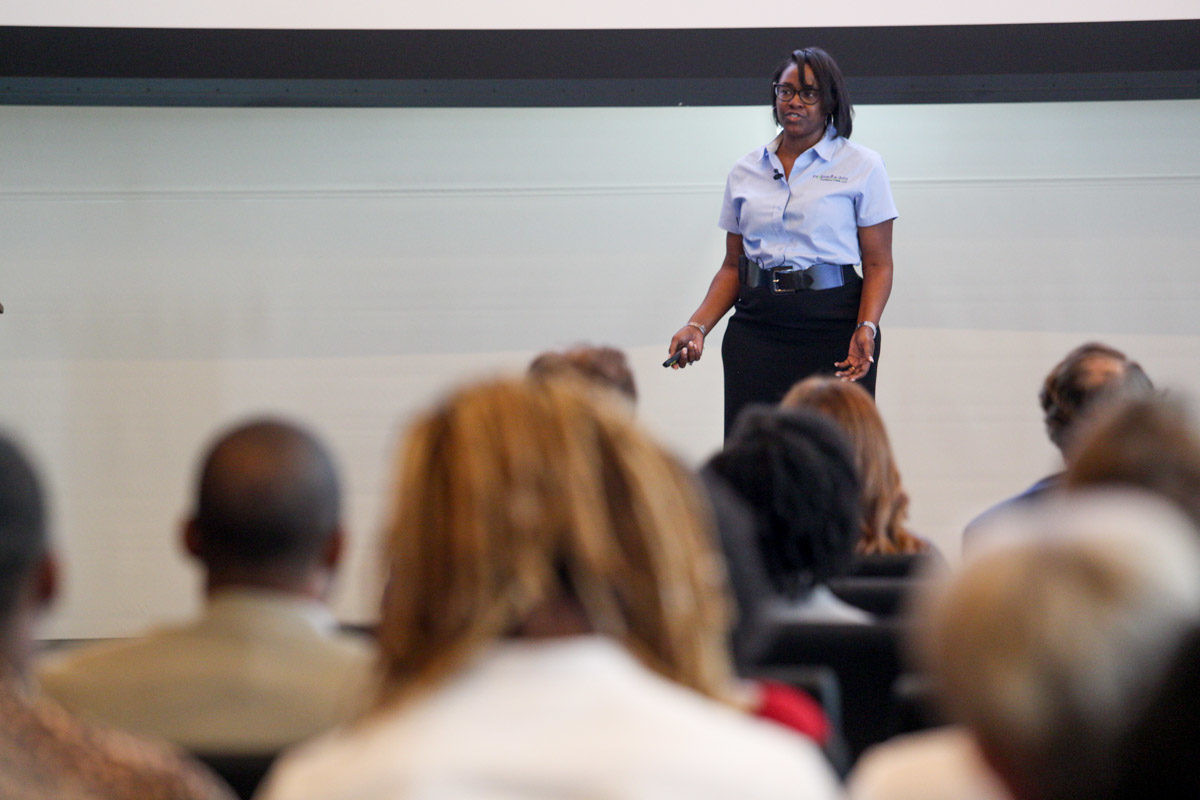 But the inspiring presentations of Demo Day were less a competition than a celebration of the eight startup companies that have used the training offered by the Delta I-Fund to jumpstart their ideas. As Delta I-Fund Program Officer Amy Hopper said, “These eight entrepreneurs will get up, pitch their project and go home winners.”

The companies presenting at the event hailed from four different states. In Arkansas, presenters included the GSS Group in Blytheville, which has developed an easy-to-use software to help small-scale farmers access larger markets by meeting a federal certification for food safety. And in Little Rock, Precise Curanomics has created a patented wrist brace for people diagnosed with carpal tunnel syndrome, while SchoolBox offers a scalable, web-based virtual learning environment and management system designed for trainers, managers and instructors. 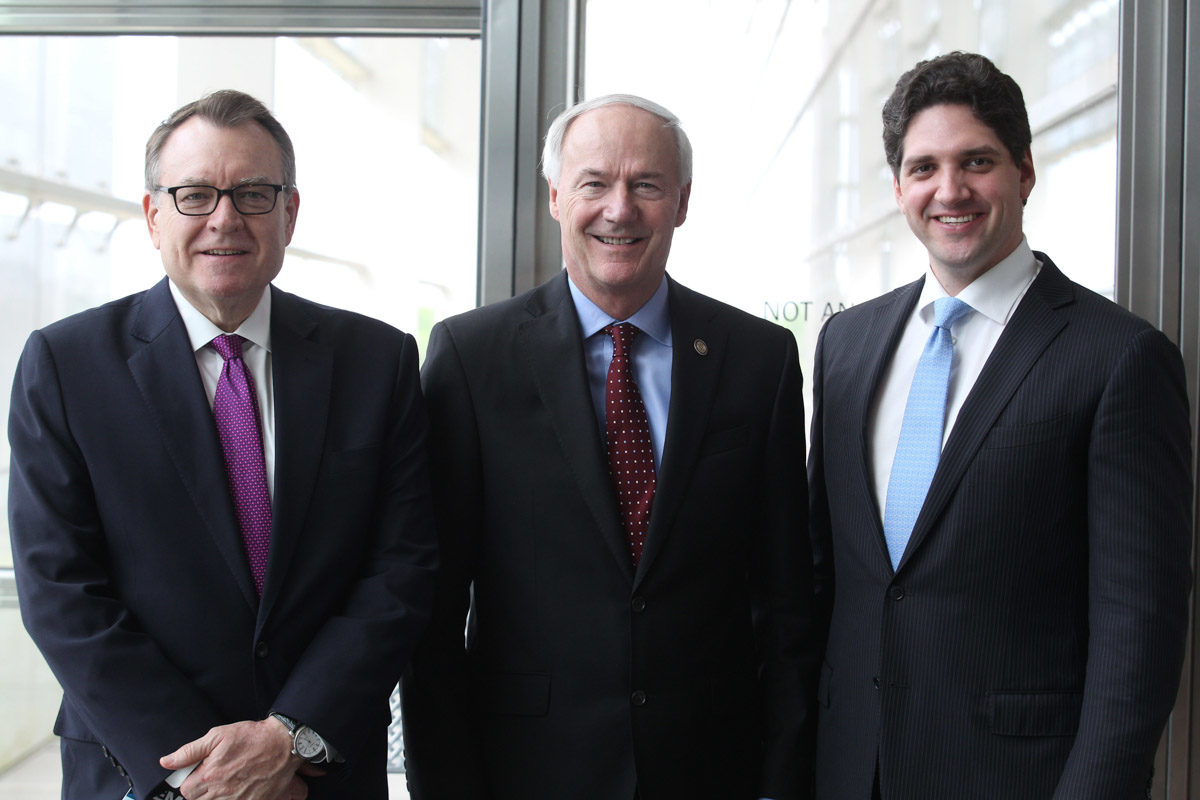 Capture, of Flowood, Mississippi, has designed a platform to improve data collection in K-12 school districts. In Memphis, Careerquo has developed an online platform to connect individuals entering or re-entering the workforce with mentors for interview practice, career advice and other needs. And in Baton Rouge, Talaria Antibodies has developed comprehensive kits for antibody-based research within high school, community college and university labs.

Together with the Delta Regional Authority and the state of Arkansas, Winrock and the Delta I-Fund are working to provide the innovators of today and tomorrow with the opportunity to grow their companies, to the ultimate benefit of their communities.