The Story of Suon Seng

In November 2008, Suon Seng was selected as the winner of the John D. Rockefeller 3RD Scholars Program grant competition for research on Avian Influenza in Cambodia and Laos. For Seng, a 34-year old researcher who specializes in avian and livestock diseases, the opportunity to conduct independent research and influence policy had seemed an unlikely goal. In the fall of 2008 Seng shared his story.

Growing up in rural Cambodia during the Khmer Rouge regime, Suon Seng struggled to find time to commit to his studies while helping his single mother with chores around the house. Seng recalled, “In that part of the country, conflict was part of daily life. It was a very difficult time.” Like many youth in the countryside, Seng thought that just making it to high school would be an impossible task. 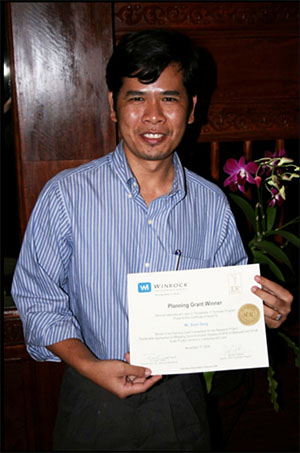 Seng worked hard, and his scores on a district-level exam were high enough to earn him admission to a provincial high school in Sihanouk Ville, 50 Km from his home. When asked how competitive it was to get into the provincial school, he humbly explained that “every year 800 students compete to earn the honor of attending the provincial school, and of the 100 students selected only 20 come from rural areas like mine.”

Having attained admission, Seng now confronted the challenge of supporting himself while away from home. He recalled one pivotal night in the fall of 1987: “Classes were set to start in three days, and I still did not know whether to continue my studies or just drop out. How was I going to travel to school with no means of transportation? Where was I going to stay if I left my home?”

Later that evening, with only the light from a kerosene lamp to illuminate their rural home, his mother said to him, “Seng, do not worry about your life. Even if you cannot complete your studies I am sure that you will make a good living. You will not face the same difficulties as me – I could not even read or write but I was still able to feed five children. You will need to depend not only on the knowledge you learn in school, but on the knowledge you gain from the people you work with.”

At that moment a neighbor stopped by to inquire about Seng’s dilemma. Seng and his mother, disheartened, both stated: “still no solution.” The neighbor mentioned that he knew a monk in Sihanouk Ville, and that if Seng was willing to perform chores such as cooking and cleaning, he could stay with the monks in the Pagoda free of charge. Seng smiled at his mother, and said, “now we have a solution.”

Seng quickly rose through the ranks at his high school, where he excelled in the sciences. In the evenings he would teach classes to local school children to support his studies, and through conversations with teachers and local development workers, he began to appreciate the importance of using his education to help the rural poor. Eager to continue his education, the budding scholar set his eyes on the university.

Due to his high marks, Seng was admitted to the Royal University of Phnom Penh, and found funding to pay his tuition in the School of Agronomy. Naturally, he flourished. Having earned his college degree, Seng took an entry-level position with a French NGO. Later, he joined several colleagues to become a co-initiator of the Cambodian Center for Study and Development in Agriculture (CEDAC), a non-profit that provides support to poor farmers in conflict affected areas of the country. Seng joined CEDAC full-time in 1999, and helped it grow from an organization of seven people working in two villages, to a staff of 272 providing direct support to more than 80,000 rural farmers.

Like many highly qualified researchers in Asia, Seng was constantly busy with a heavy load of projects, trainings, and workshops. Due to CEDAC’s reliance on large donor-funded projects, Seng had little time and resources available to design and implement independent research. Furthermore, Seng was troubled by the same question as many of his peers across the region: How to access decision makers who could act on his findings and recommendations?

“I knew that Cambodia needed an institution dedicated to participatory, applied research,” said Seng, “and in 2007 I decided to separate from CEDAC and create my own organization, the Center for Development Oriented Research.” Against all odds, Seng had succeeded in creating an organization dedicated to working on behalf of the rural poor to find policy solutions to their most pressing environmental and agricultural challenges.

With support from the JDR 3RD Scholars Program, Suon Seng will design and lead independent, applied research on the socio-economic impacts of AI outbreaks and control measures on poor farmers in Cambodia and Laos. Guided by a committee of local experts, Seng will receive high-quality training on leadership and strategic communications, allowing him to translate his findings into practical recommendations for policy-makers. Eager for this new challenge, Seng has assembled a bi-country research team which includes veterinarians, agronomists, social scientists, and natural scientists from Cambodia and Laos.

Throughout Asia many promising young researchers lack the time and resources to undertake independent research, and struggle to link their work to decision making processes. With support from the JDR 3RD Scholars Program, midcareer researchers can access the resources, skills and guidance needed to reach the next level of leadership in their quest to impact policy and practice in their fields.