Saiful Islam lost everything. Now he works to keep others safe.

Saiful Islam grew up the youngest of seven children in a poor family in the Rangpur District of Bangladesh. He became a supervisor after completing his higher secondary education and he passed his bachelors exam, too. But after receiving his degree, he wasn’t able to find a job. With no other options, he began to work the small parcel of land he inherited from his father. But it quickly became obvious that this was not enough to support his family — so Saiful began looking for jobs abroad.

Saiful was desperate for work, but he was also careful. He discussed the pros and cons of taking an overseas job with the local agent of a recruiting agency as well as the director of a vocational training center. Finally, he found a position as an electrician in Singapore, a two-year contract with a monthly salary of USD $1,600. Saiful decided to emigrate, handing over BDT 565,000 (USD $7,000) to the recruiters for his airfares and fees. He obtained the money by selling most of the land he inherited from his father.

Saiful reached Singapore on August 21, 2017 and learned right away that the job was not as advertised. First, he would be working as a mason, not an electrician — and his salary was only half what he had been promised. This was only the beginning, though.  Saiful didn’t have enough to eat, he was monitored closely and, worst of all, he wasn’t paid. When he asked for his salary, he was threatened. Finally, after almost a year abroad, Saiful arrived back in Bangladesh. He had his life — but nothing else. He had sold his land, lost his money and still had no way to earn a living. 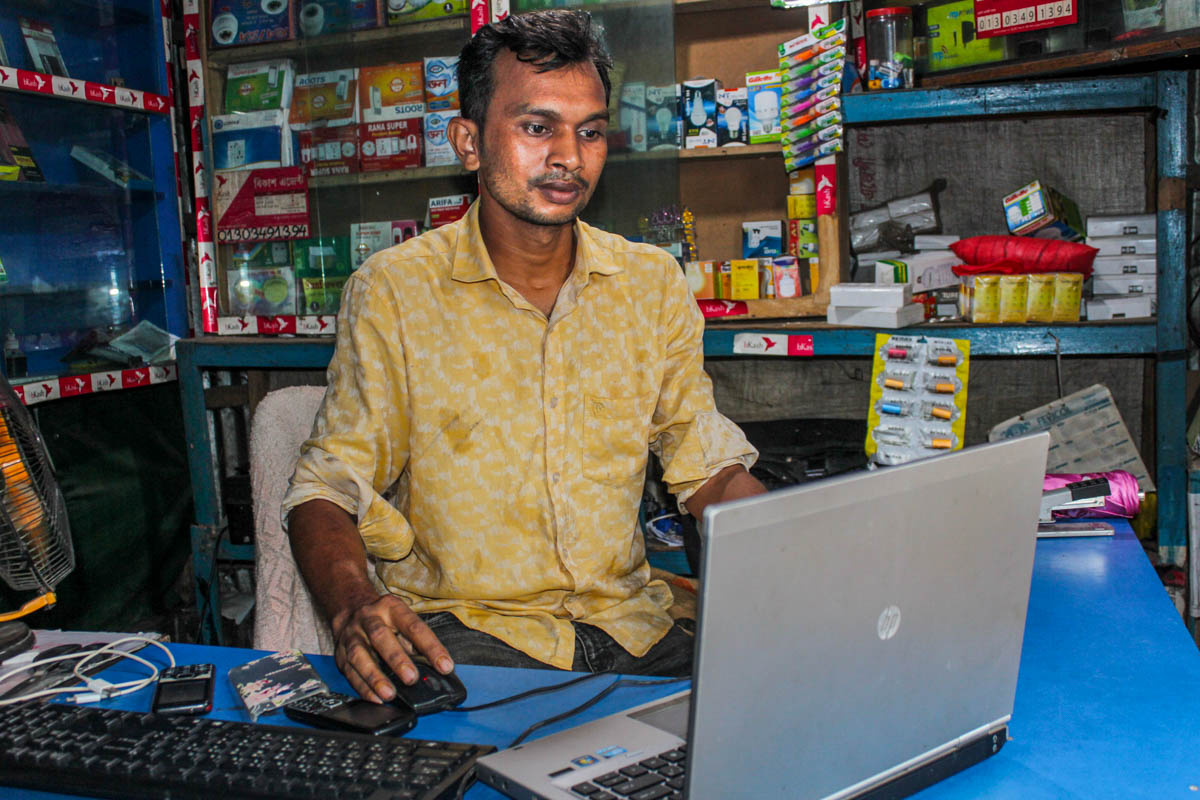 Saiful Islam carefully researched overseas jobs before he took one in Singapore. He was still trafficked.

Enter the Bangladesh Counter Trafficking-in-Persons (BC/TIP) project, which is funded by USAID and implemented by Winrock International. BC/TIP peer leader Beauty Khatun, along with community mobilizer Ashraful Islam and project officer Md. Abdur Rahma, visited Saiful’s house regularly after learning of his plight, encouraging him and telling him about the help they could offer. Soon, Saiful signed up for the project’s life skills development course.

“I wish I had known about this program earlier!” Saiful said. “I would not have endangered my life in this trap and lost everything.” After getting connected with BC/TIP, Saiful joined sessions on counseling, life skills and entrepreneur development. He also became a member of the survivor’s group ANIRBAN (which means “the flame that never dies”). 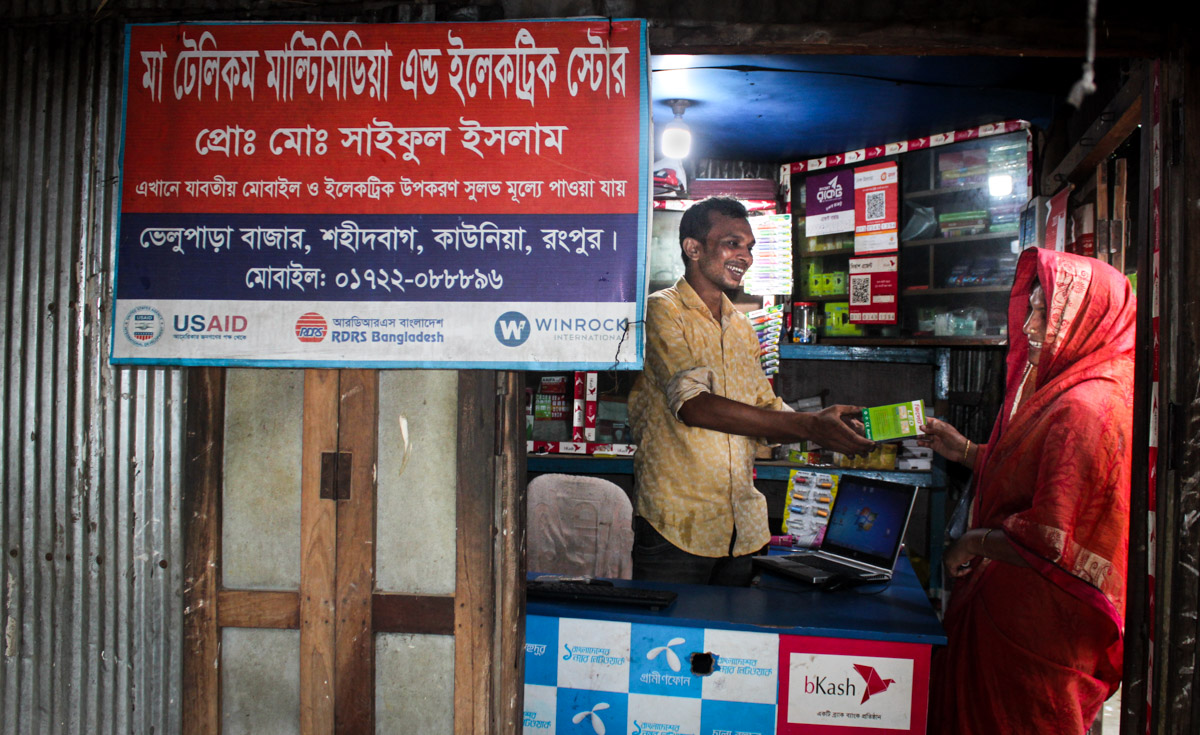 Saiful helps a customer in the electronics shop he opened, courtesy of the help he received from the Bangladesh Counter Trafficking-in-Persons Project, implemented by Winrock.

The changes were evident right away. With help from BC/TIP, Saiful started a small business, an electric shop, to improve his life and the lives of his children. And in November 2019, he and a few other ANIRBAN members established the Ekota Blood Bank in Rangpur, which collects donated blood and sends it to hospitals. It has become a valuable addition to the health of people in his district.

But it is as an advocate for the most vulnerable where Saiful shines most brightly. In addition to participating in routine activities of BC/TIP and ANIRBAN, he visits victims and vulnerable individuals on his own. He speaks up at community meetings and school orientations, informing the audience about human trafficking prevention, the 10 steps of safe migration and the hazards of early marriage.

Whenever Saiful learns about a case of smuggling or illegal trafficking, he visits the victim and tries to connect him or her with the BC/TIP program. He speaks to children and their families about the risks of early marriage, how it interrupts education and is illegal in Bangladesh. In most cases, parents are convinced, and the children do not marry. If a family is faced with a huge crisis, Saiful helps connect them with the BC/TIP program. Often, he visits victims’ homes and discusses their problems with them, commiserating as only someone who has been trafficked can.

In late December 2019, with the support of the BC/TIP program, Saiful was admitted to the Rangpur Engineering and Technical Training Centre, which is run by Muslim Aid, which has a memorandum of understanding with one of BC/TIP’s partners, to complete a six-month course on mobile servicing and repair. After completing this training, he further improved his business. which allowed him to feel more secure and to further intensify his work for the most vulnerable sector of the population, those who were smuggled or victims of early marriage. 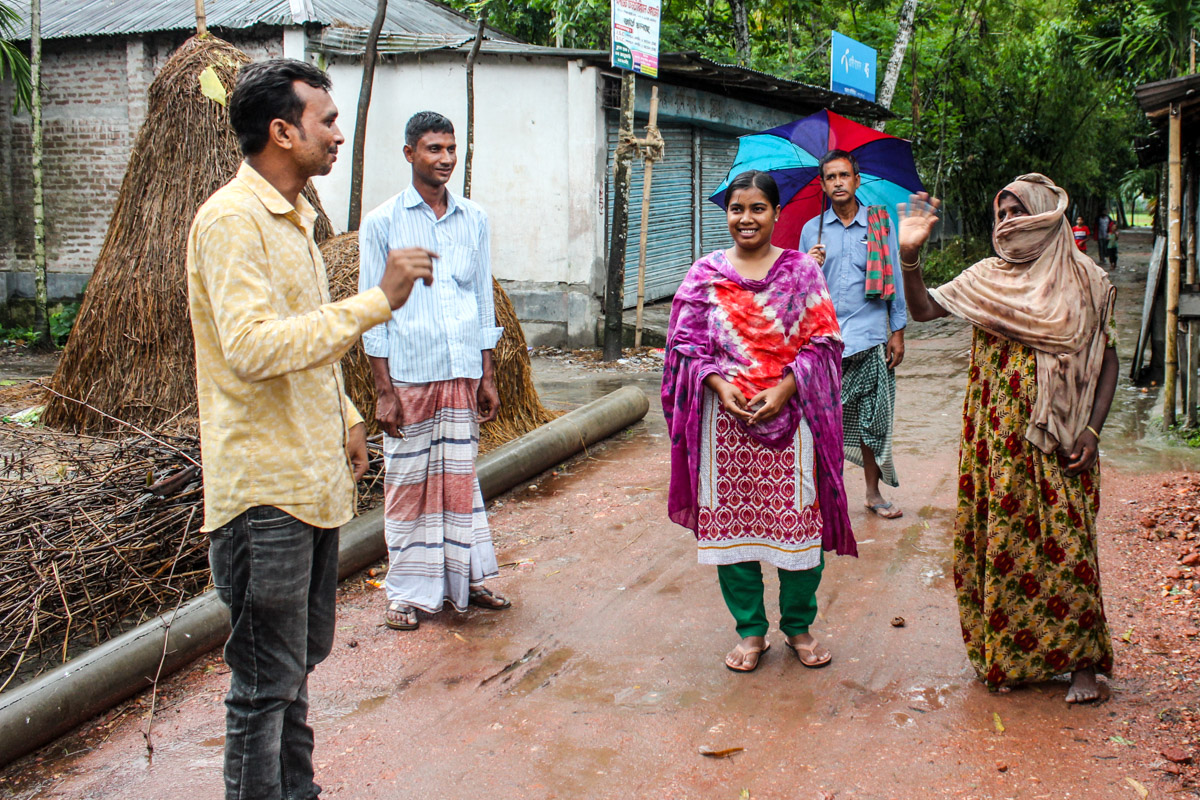 Saiful is a respected member of his community. He used his own money to start a fund for the most vulnerable.

During the COVID-19 outbreak, Saiful has joined with the BC/TIP program and local administration to make and distribute 200 masks and to identify 100 families that need relief. He is raising awareness among residents in his area that they should stay home and maintain social distance even as he continues to reach out to victims and their families by phone.

Most impressive of all, Saiful has used his own money to create a fund of BDT 15,000 (almost $200) to support 13 families in his locality who are especially vulnerable. He remembers how difficult it was when he returned home — and it’s even more difficult during a global pandemic. He wants to spare others this pain and help the most vulnerable. “As long as I am alive,” he says, “I will try my best to help them.”