A Humbling and Rewarding Experience in Bangladesh

I would like to share how my Winrock International USAID-funded Farmer to Farmer (F2F) volunteer assignment was one of much excitement and full of very rewarding humbling experiences. One experience stands out as a professional one that led to a career culminating experience for me that I would like to share in this blog. The experience deals with my career as an irrigation agronomist/horticulturist of 42 years (1975-2017), which concentrated on “drip irrigation technology” in developed and developing countries. My initial career path in drip irrigation technology started in 1975 with my research at Virginia Tech as a Ph.D. student in the Department of Horticulture doing research on the development and use of drip irrigation on tomatoes in Western Virginia. The drip system that I was using to irrigate the tomato plants with was developed and provided for my research by Mr. Richard Chapin of Chapin Watermatics, considered to be the “Father of Drip Irrigation” in the United States.

My drip irrigation career took me to developing drip systems for bananas and pineapples in Honduras, Costa Rica, and Hawaii with Dole Foods, working with commercial drip irrigation vegetable growers in Florida. In addition, I was involved in agricultural development projects with USAID and USDA where drip irrigation for fruit and vegetable growers was emphasized in Pakistan, Afghanistan, Guinea, Senegal, and finally- in Bangladesh. The drip irrigation projects that I was involved in were not all success stories. One in particular failed in 1987 in six months after I departed the country, due to the end of the development project I was serving on. Failure occurred because there was not a dealer network for drip irrigation supplies and technical support. This failure haunted me for a long time. The training experience with Winrock International in March-April 2017 has left me very excited and encouraged about the drip irrigation systems. I used Mr. Chapin’s drip tape that was installed by the Thanarbaid banana growers in the Madhupur Upazila of Tangail District in Bangladesh through the auspices of Shalom (formerly Church of Bangladesh Social Development Programme-CBSDP and their Youth Beneficiary Group). Drip irrigation success in Bangladesh is assured via dedicated banana farmers, Winrock International, USAID, and partner, ACI Agribusiness, who works with Jain Irrigation of India, a key supplier of drip irrigation technology, including Chapin drip tape. What a rewarding experience it was to culminate my drip irrigation career knowing that drip irrigation technology in Bangladesh will thrive and serve as a food security tool to help feed the people of Bangladesh. 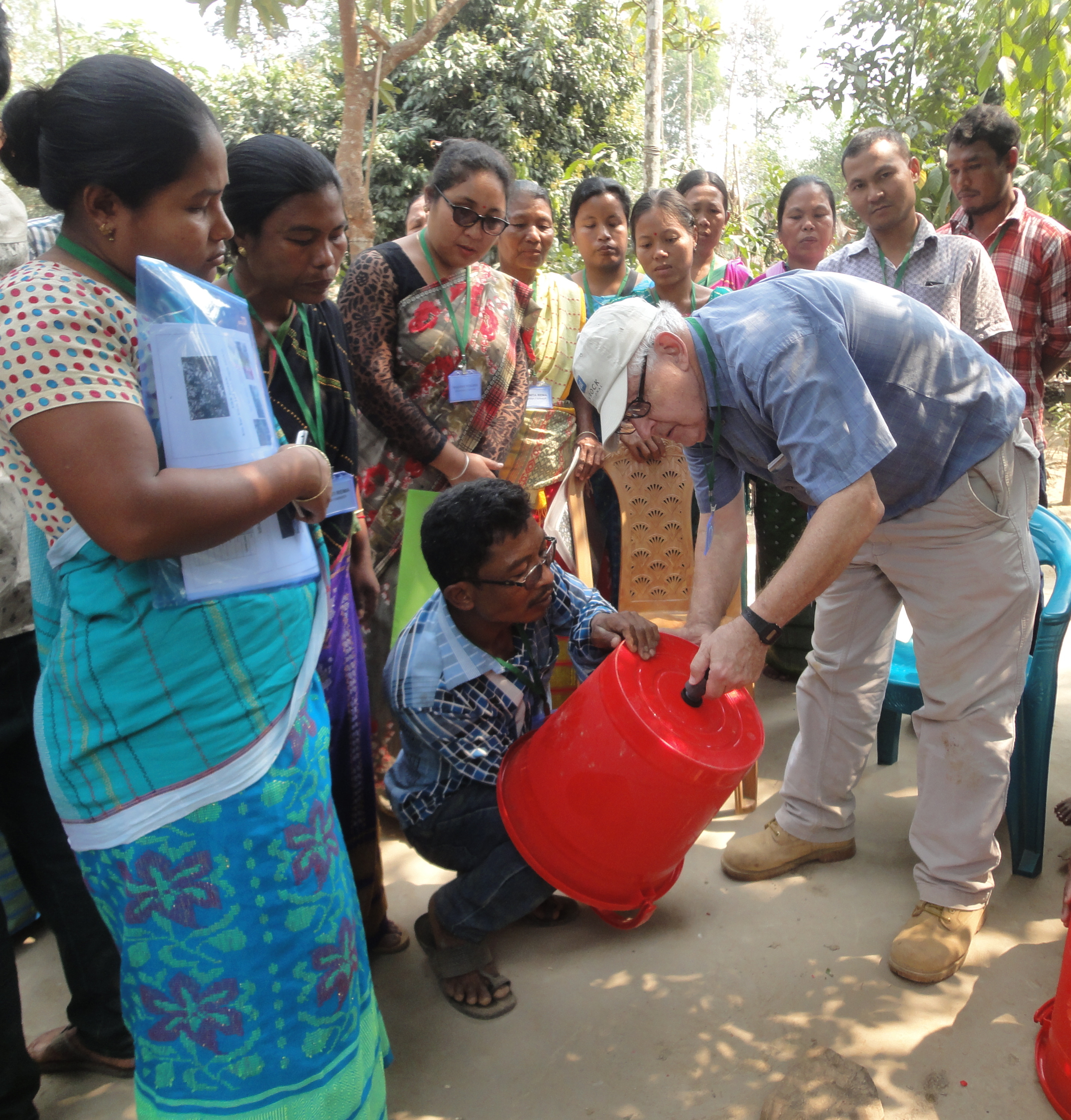 Dr. Kovach working with the banana farmers to connect the tubes through the bottom of the bucket to the irrigation tape. 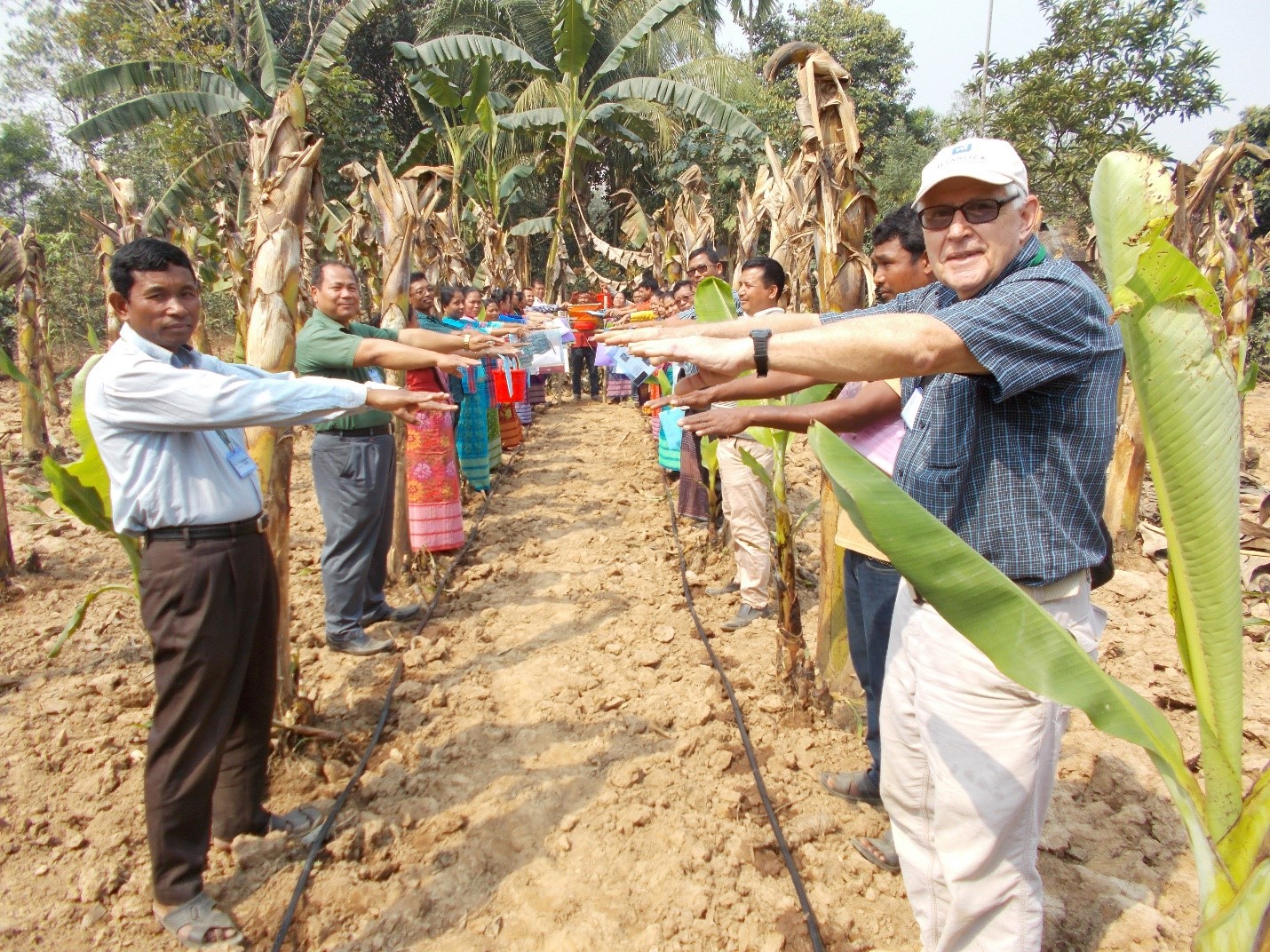 Dr. Kovach with banana farmers over the Chapin Drip Irrigation Tape. Note the dark circles next to the black drip tape where water has come out of the water emitting orifices and began to wet the soil to supply water to the banana plants. 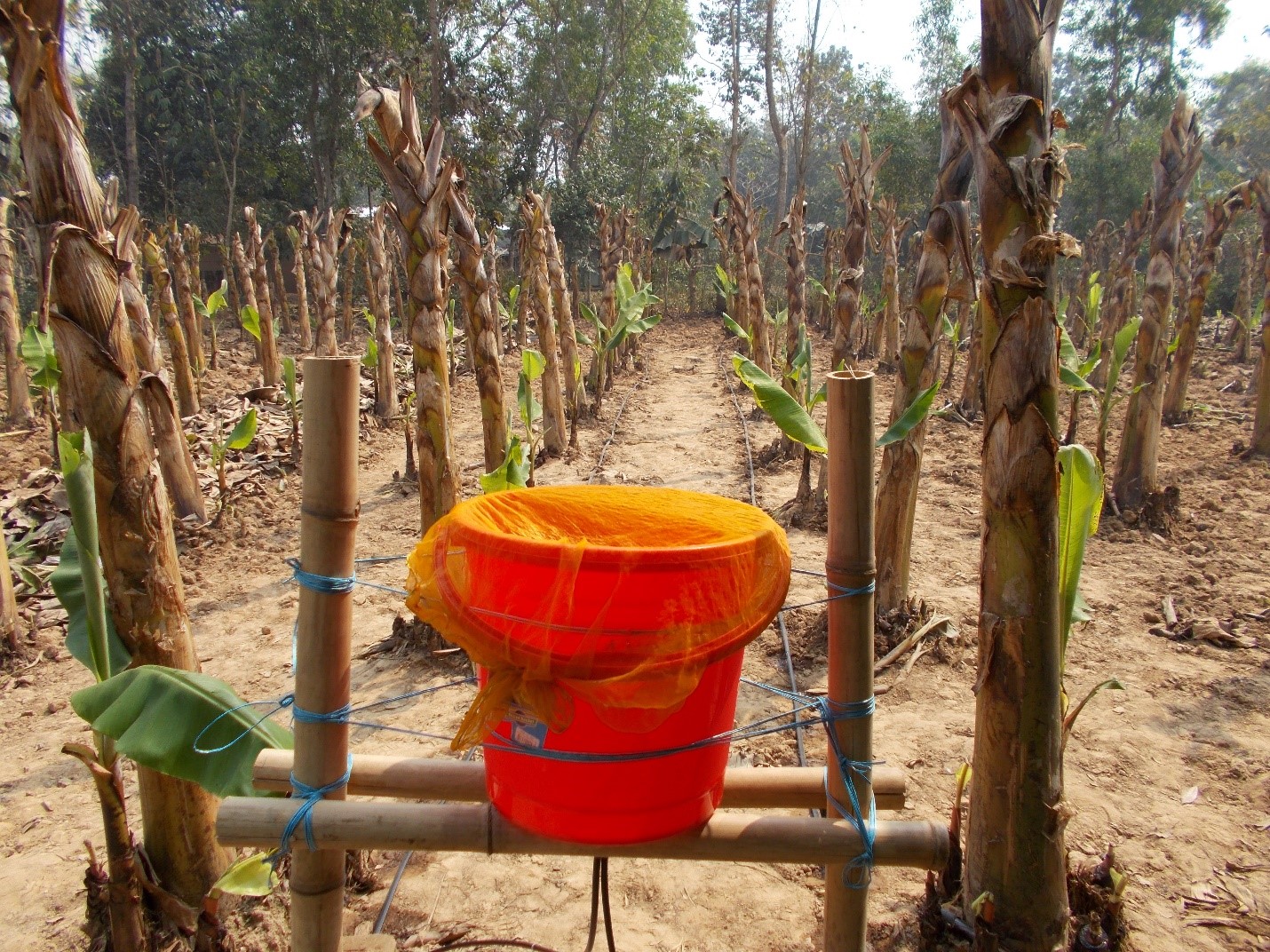 Chapin Bucket Drip Irrigation System supplying water to the two black drip tubes next to the banana plants. The major advantage to using drip irrigation versus the traditional irrigation method of flooding the field is in water savings, where 50% less water is needed to irrigate banana crops. 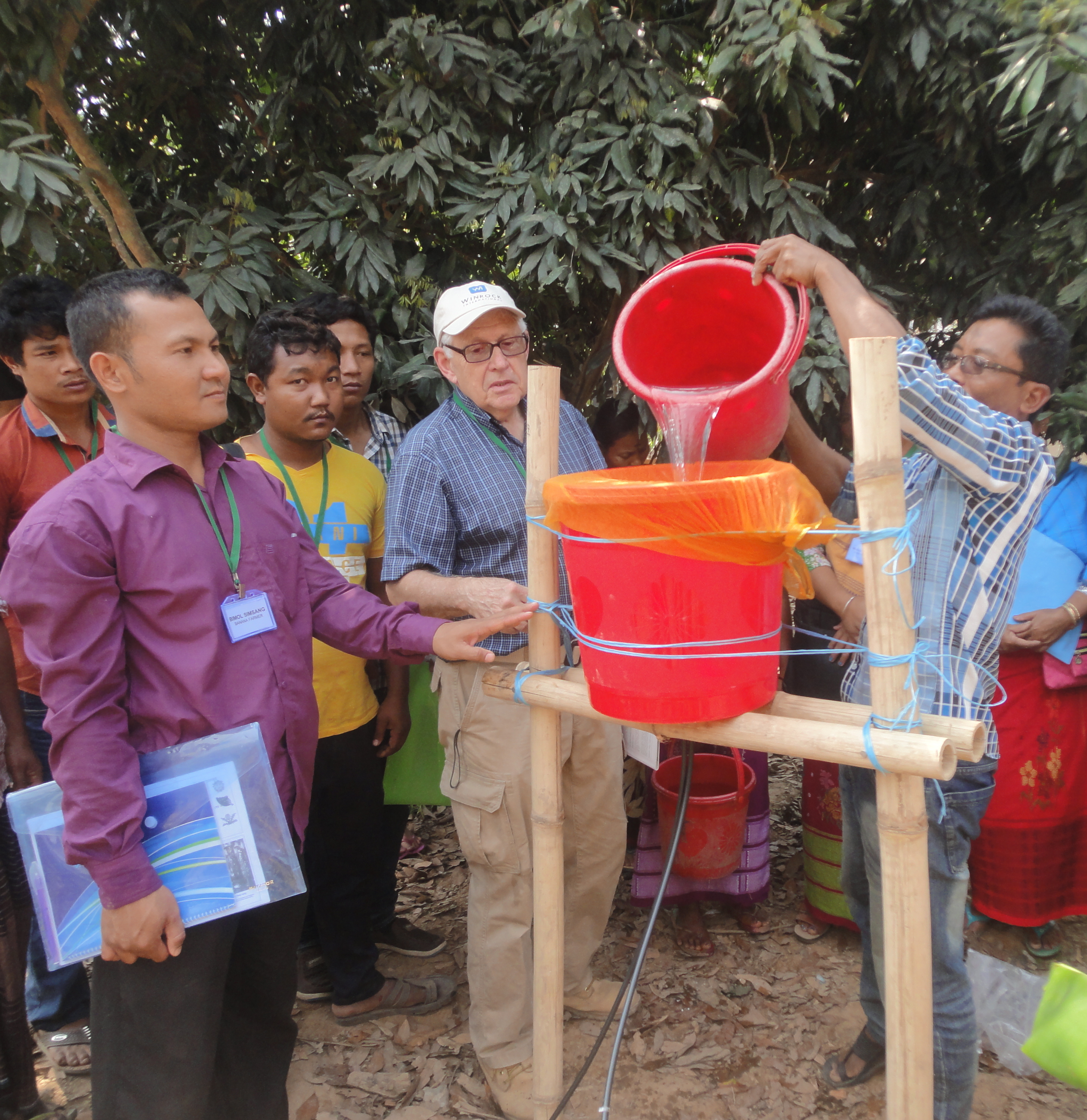 Dr. Kovach observes one of the participants pouring urea mixed water into the buckets to provide plants with water and fertilizer through the Chapin Bucket Drip system in the orchard.