Posted on September 18, 2018 by Francoise Djibodé-Favi 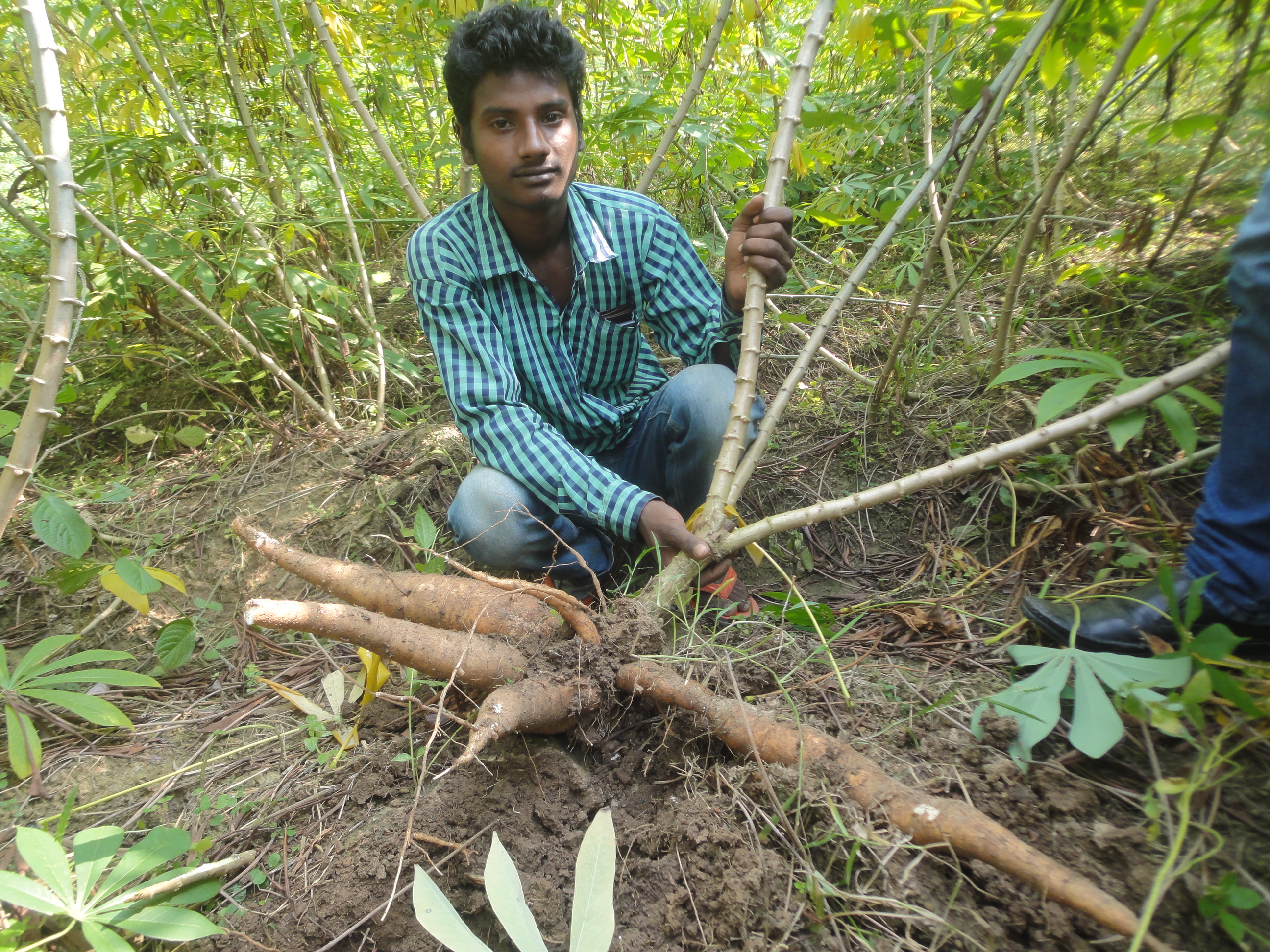 PRAN/PABL (PRAN Agro Business Limited), a food processor and agribusiness company decided to grow cassava crop for its industrial expansion and needed a volunteer to train the young women entrepreneurs involved in this project. This sounded familiar me, as I was introduced to the production and processing of cassava tubers into gari and tapioca by my mother’s family as a teenager. The transformation of cassava tubers was my mom’s main business for more than sixty years and had enabled her to pay my tuitions. Cassava goods were once staple foods for more than eight hundred million people in Africa, where they were processed and sold by women to make a living till the early 1980s. Thereafter, the disease prone and low yield cassava varieties that had been introduced from South America and cultivated in Africa since the fourteen century were wiped out. Therefore, the improved, disease tolerant and high yield varieties needed to be reinstated in Africa, including Benin (my country of origin). As the Director of Crop Protection Service, I had assumed this task (using multisource funding), essential for the restoration of the agricultural food chain and specifically important to the participation of Beninese women in economic development. 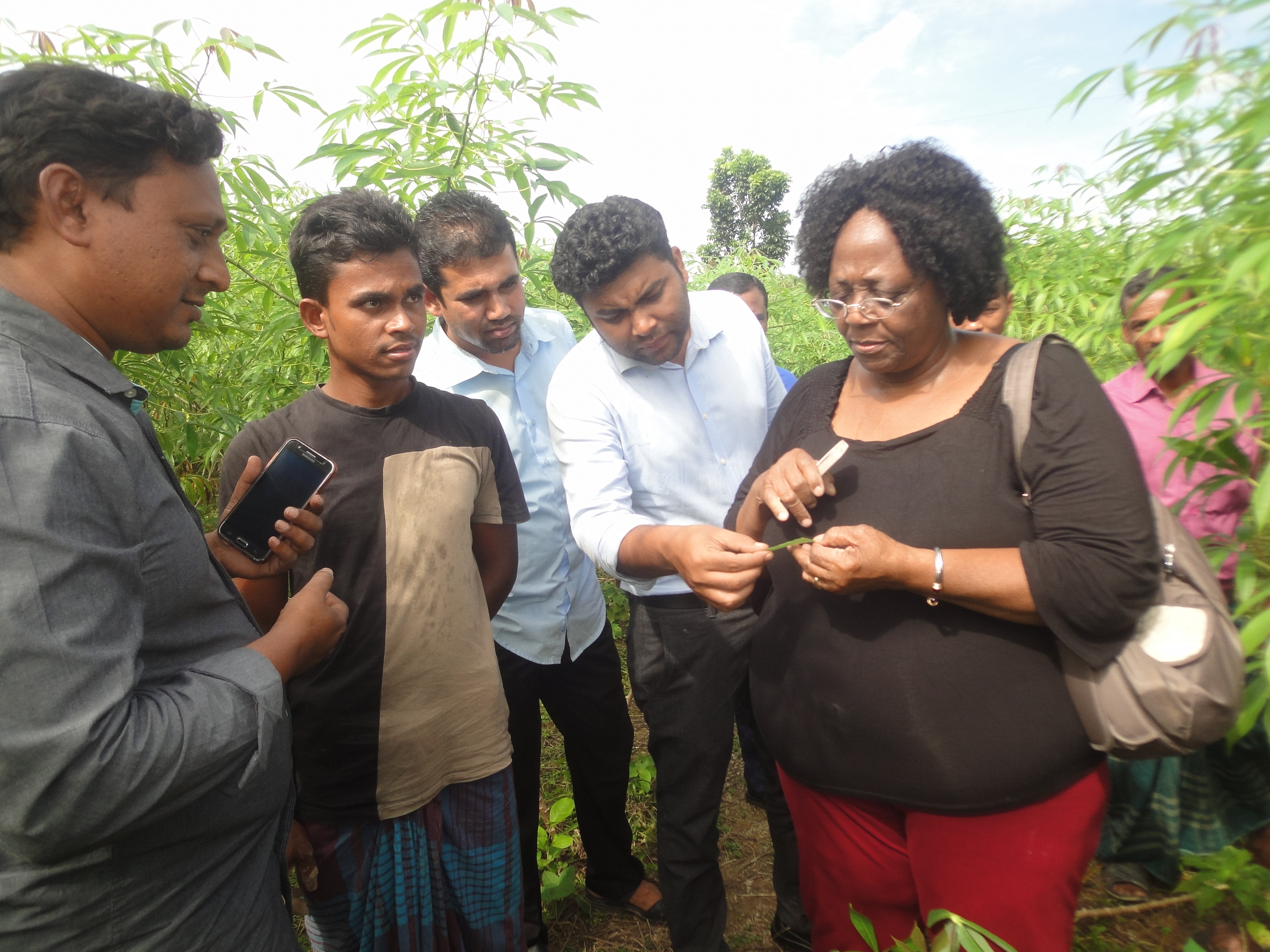 The aim of this assignment was to train Bangladesh women and youths to grow cassava that will be purchased by PRAN/PABL. The tuber part of the plant will be used to make gluten-free starch designated to be transformed into either glucose or flour and used in making juice or in baking industries. Furthermore, starch was vital for the clothing industry that brings in twenty percent (20%) of Bangladesh’s Gross Domestic Product (GDP). So far ninety percent (90%) of this needed starch is imported from Thailand and PRAN/PABL had decided to produce it in situ. Thus, the company installed a starch producing plant, is on its way to building the second one and is pushing to scale up the production of cassava tubers. Fallow and empty lands not suitable to grow other domestic crops, such as rice, are being gradually gradually with cassava crop. 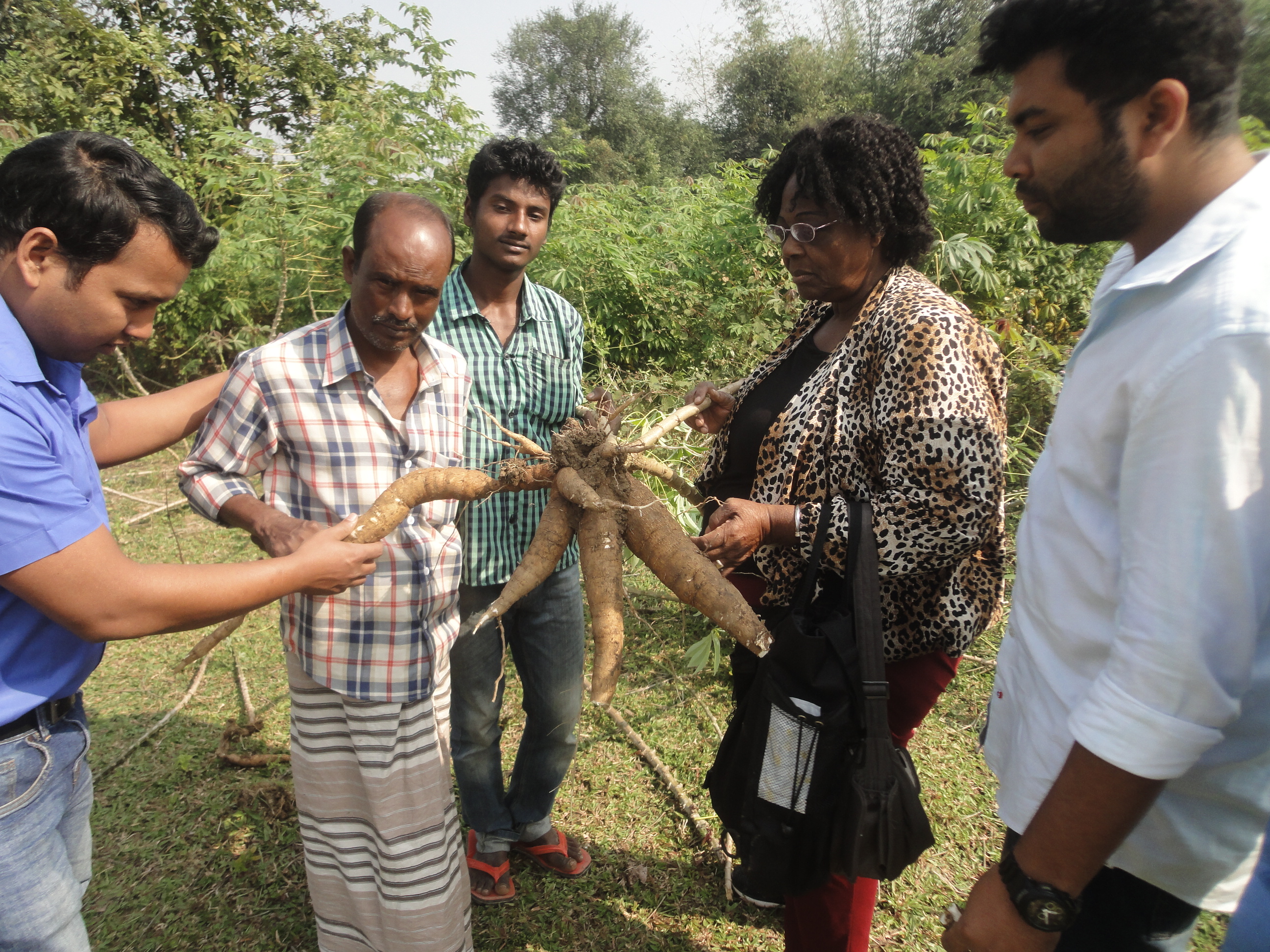 Cassava is not a staple in Bangladesh and may not have been cultivated had not PRAN decided to use it as an industrial crop. PRAN funds the producers by providing the input (seedlings, fertilizer, pesticides and technical assistance) and thereafter purchases the cassava when the crop is mature. The tubers were transformed into starch, glucose and flour. The stems are cut and distributed to all potential producers under the control of PRAN technical staff. Waste derived from tuber peels, chaff from starch processing and leaves cut from the plant are recycled and used to either make organic fertilizer or chicken feed for their chicken farms. It could also further be used to make biogas for cooking and ethanol for cars and buses. All part of cassava plant is put to use in industrial development.

Training on Improved Cassava Production for Youth Entrepreneurship Development was held in Modhupur, Tangail from 11/17 to 11/25/2017 and for four hours on 11/28/2017, at PRAN Headquarter in Dhaka. The first training session involved 32 participants (with 3 women) made of PRAN field staffs and producers-head of cassava grower cooperatives. The Dhaka session was for PRAN/PABL personnel (forty in total) only and was part of their monthly meeting schedule. They were trained in Dhaka using one of the training modules designated to produce semi-mechanized cassava crop. Topics such as the need to use cover crops to lower the cost of weeding control and the introduction of new improved varieties of cassava had been debated after the training session. 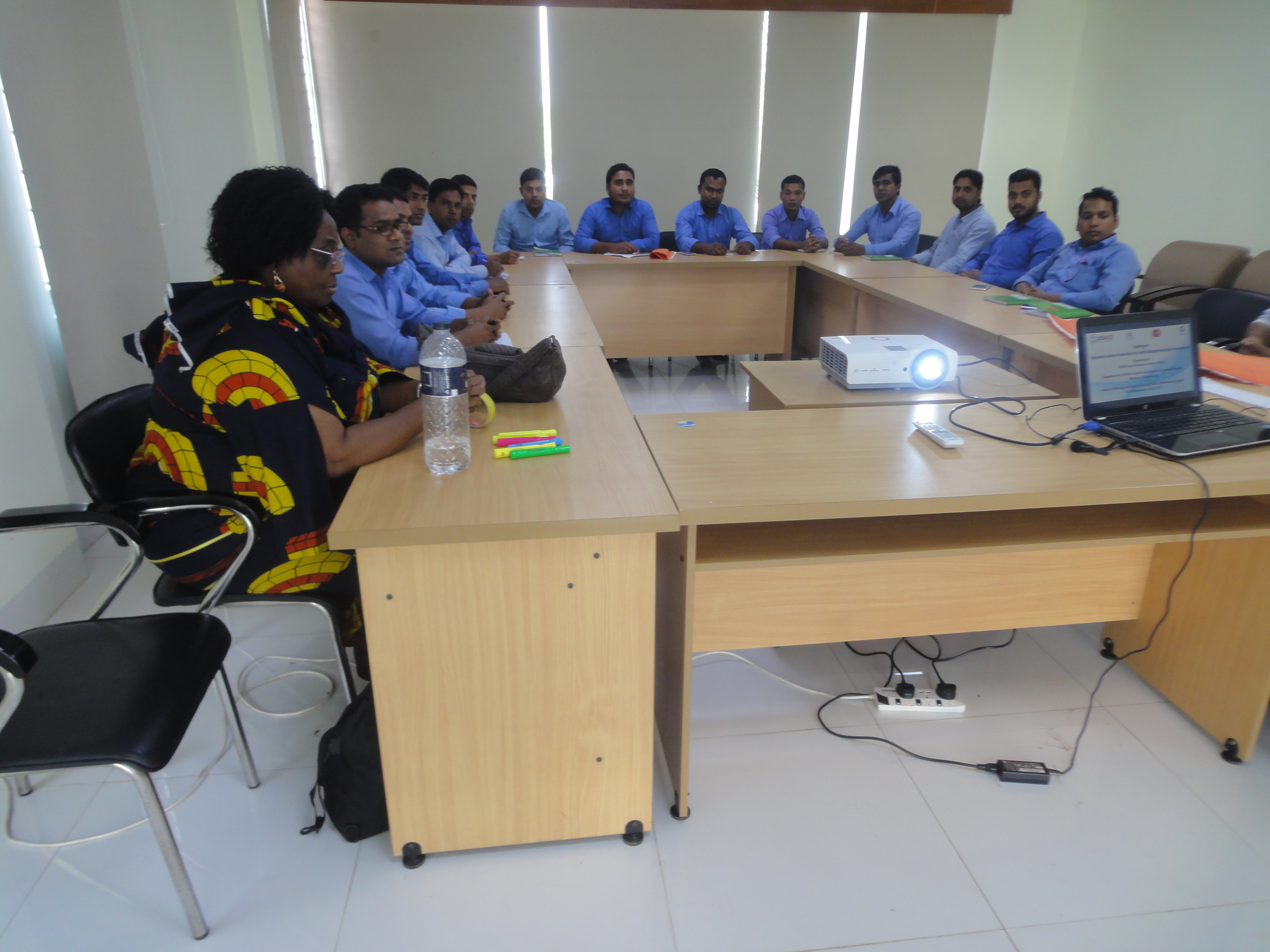 Cassava is becoming the next best thing designated to change Bangladesh farmers’ lives by boosting their income under this special scheme implemented by PRAN. As for now, cassava farming is at low-cost and more profitable because it requires less irrigation, fertilizers and insecticides. It is also less affected by natural calamities. PRAN wants to keep it that way and had organized this training for both farmers-head of cooperative and its staff to avoid the mistake made by Thailand. Industrial production of cassava had become Thailand’s main export and domestic substance since 2009 until the invasion of cassava mealybug and spider mite in 2014. This country is actually losing more than twenty percent of tuber produced and has less suitable seedlings for subsequent production. Cassava production is so secured under PRAN watch that numerous women have decided to join the program. 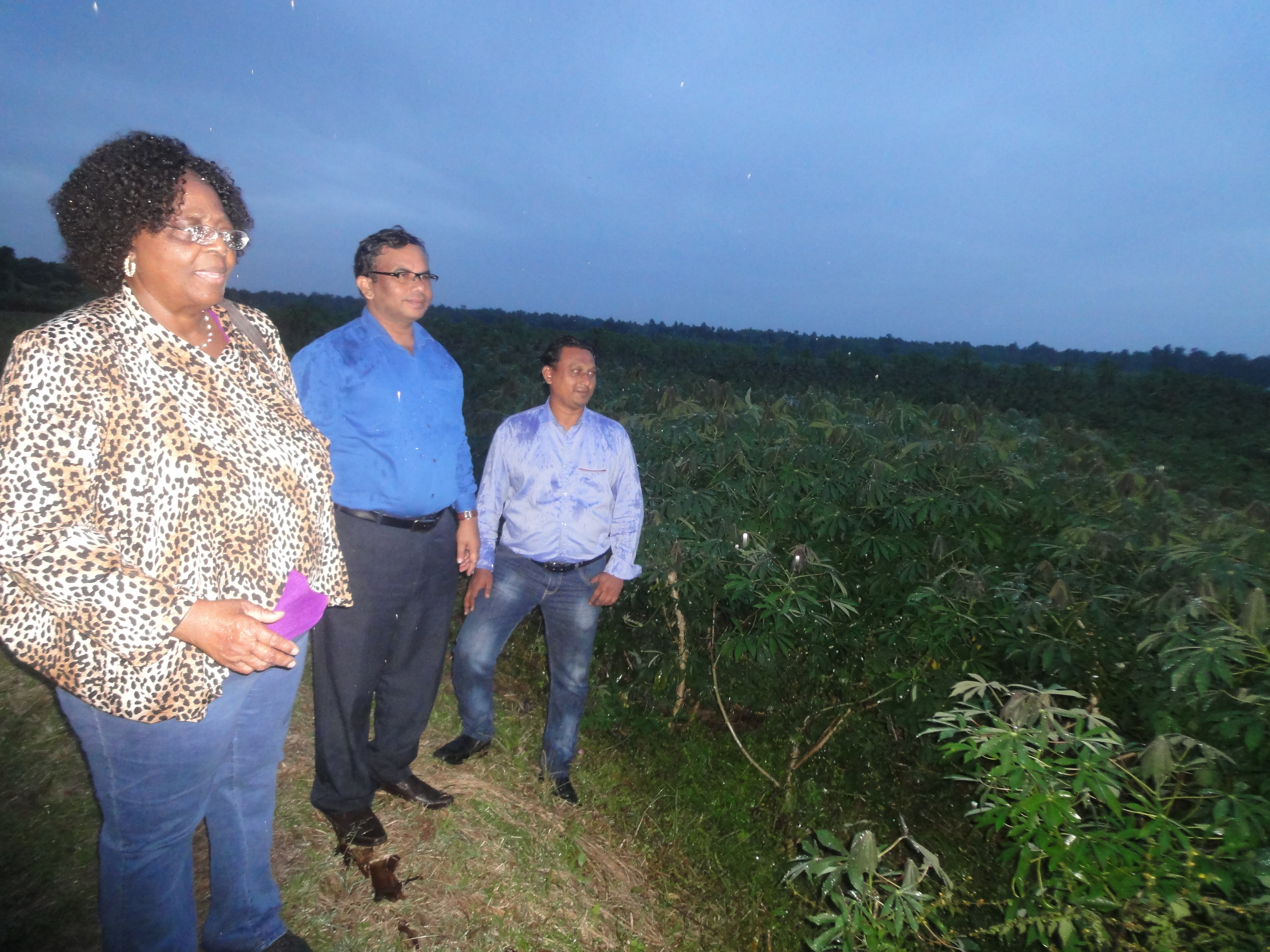 My main activities were to: 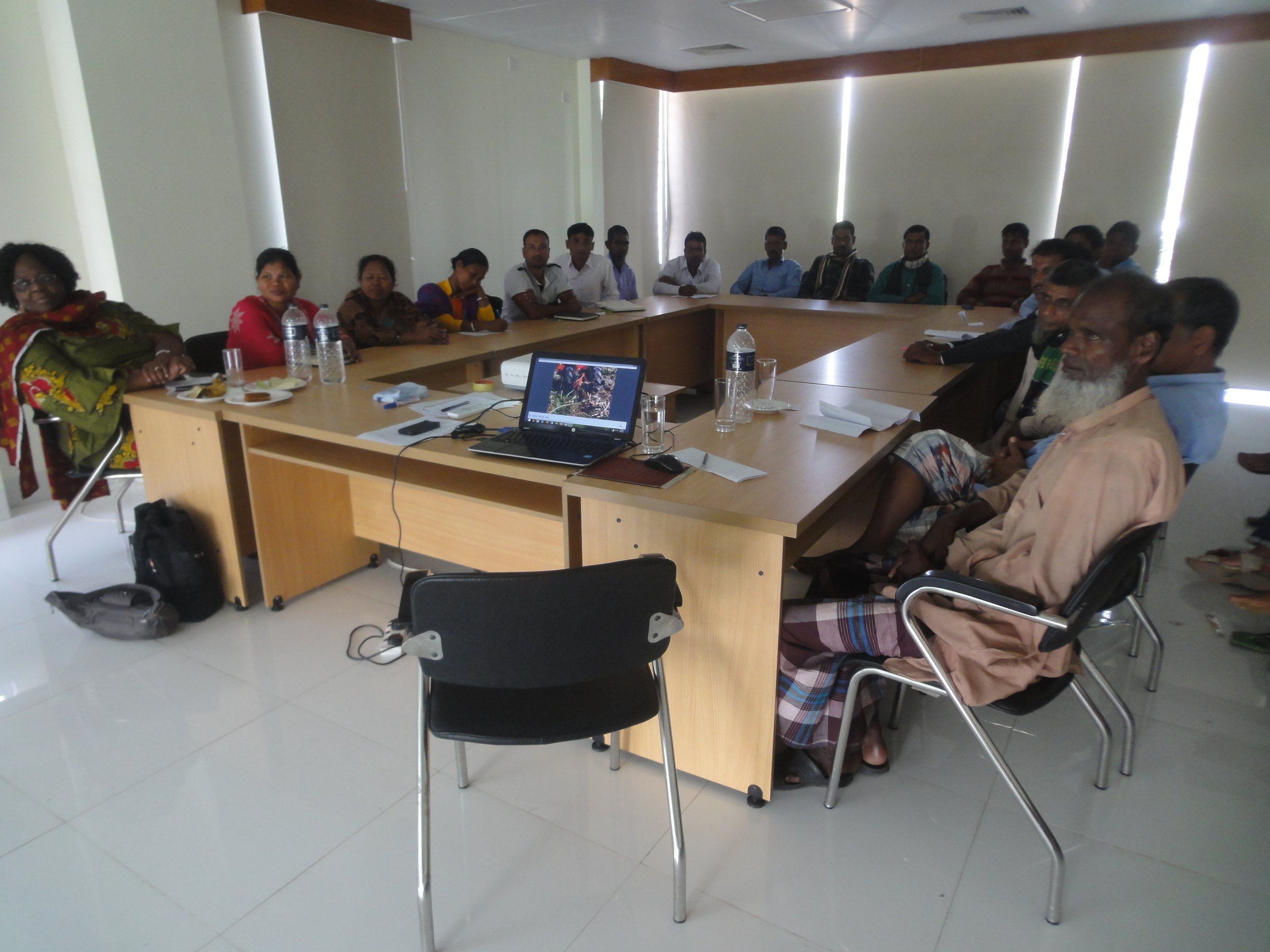 I was overwhelmed by the enthusiasm and willingness to learn displayed by the trainees. Cassava is a cash crop that could be grown with no major problems and then easily purchased by PRAN. In addition, tuber collection from farms to the factory was ensured by PRAN. The producers take home more than 7000 Taka/acre. This earnings was predominantly used to acquire new land to increase cassava production. Their concerns about harvesting, weed control and flooding of the field were resolved by recommending: a) a semi-mechanized devise to uproot these tubers easily, b) installation of a suitable cover crop and c) plant cassava on ridges.

I am confident Bangladesh will produce the needed starch for its industry.