In Guinea, West Africa: Lessons from the Land

Fruit and vegetable production is fundamental to food security and economic development in rural Guinea and efficient irrigation practices are vital for producers. Today’s blog comes from volunteer David Speidel, who trained members of the Microenterprise of Fruits and Vegetables Producers of Boulliwel in Guinea on water management and drip irrigation. David shares his reflections on the landscape and potential for agricultural success in Guinea.

“The Guinea Central Highlands of West Africa are a prominent feature of the region. These mountains block the early morning sun rays and during the rainy season catch the humid Atlantic air currents piling up the heavy air, into layers of clouds, making a glimpse of the sun shooting over the hills and under the clouds a rare and brief event at best. These rugged promenades of ridgelines, sheer cliffs, and peaks reaching 1,300 meters, for ancient range lack the smooth rounded hills expected of our mother continent. One rare afternoon, when the haze lifted, while I was looking west from the canyon west of Dalaba I counted nine, maybe eleven ridgelines formed in a north-south aspect, marching in echelon toward the Atlantic like some monster army of giants. In that regard the mountains are a force to be regarded with caution. Since it is this mountain barrier that must be breached by roads to reach the promise of prosperity offered by the iron and bauxite ore beneath the mountain and harvest the bounty of the land’s mangos and gardens of legumes that grow on its slopes.

The villages lay, nestled in the level folds of road every four to eight kilometers. The large towns, Kindia, Mamou and Dalaba occupy the important road junctures and the homes, street vendor shops and Mosques sprawl over the hills and up and down the valleys. In between are stretches of forested clad slopes, bare, nearly vertical walls of cliffs, and steep loam slopes in open sections of hillside gardens with short, six meter long, rows mounted up across the hillside to guide the coming runoff to outlets draining the runoff during the rainy season. Along the roadway are the promenades of granite, with balsa stone skins, standing alone, jutting into the sky or blocks of uplifted sandstone features crowned with the tropical vegetation makes the view unique. Found in protected places are the farms.

This is clearly a place where people are close to the land. Not once do I remember seeing a tractor. Everything is done by hand. The hand hoeing to mound up the garden rows in the deep loam along the second terrace landscapes which lay by streams or the making of new land on hillsides by mixing the barrowed soil with manure requires constant cultivation. The 3,000 milliliters of annual rainfall does provide the needed water. It also requires rebuilding the rows on the hillside and the drains in the valleys. During the dry season carrying of water in 20 liter buckets is another chore requiring hand labor to grow a crop. The small gardens that makeup the 26 hectare farm is worked by an association of individuals, lays near the village (Baadi) called Boulliwel. It is down in a valley below mountains raising 400 meters above which feed the springs that provide the water for the wells the women draw water from daily for their gardens. The farm association is at the end of a trail which runs two kilometers through a cattle pasture of scrub brush, burned each year to open the land to the sun and allow the grass to compete once the rains start. To reach the turn off of the unmarked trail one of the many dirt roads out of Boulliwel runs another two kilometers along the spine of a ridge high above the valley. This is the road that produce is carried to town for the weekend market. 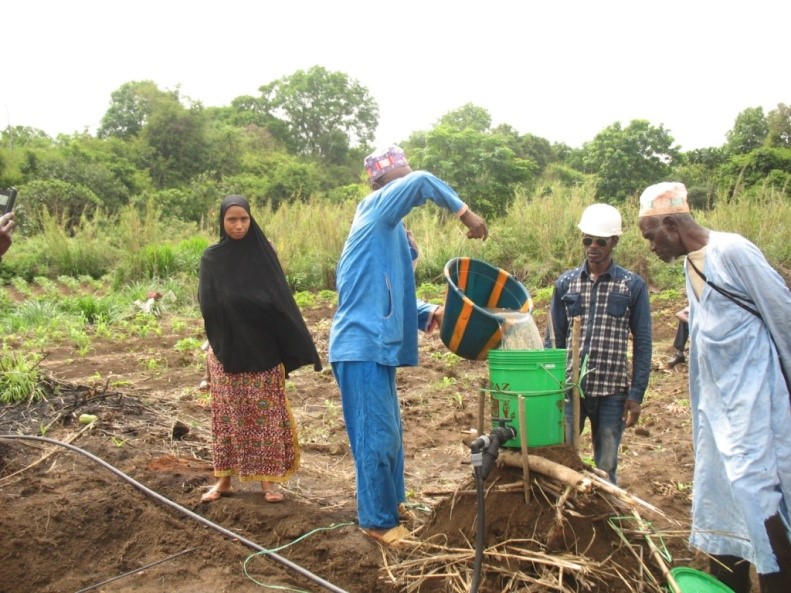 The rangeland is a mystery. The scrub sends its roots deep into the cracks of granite that has only a thin entisol surface covered with scatted basaltic stones left eons ago. This early in the season between the dry and rainy period the land seems devoid of grass needed to feed the few horned cattle lying in the shade and chewing cud. Was this land once covered with the same red loam seen on the upper hill tops? Was it once fertile, only to have lost its topsoil to the demands of early agriculture? Today the scrub rangeland only supports sparse grass with the help of open fires to clear the brush that let the sunrays in and wait for the rains to come. 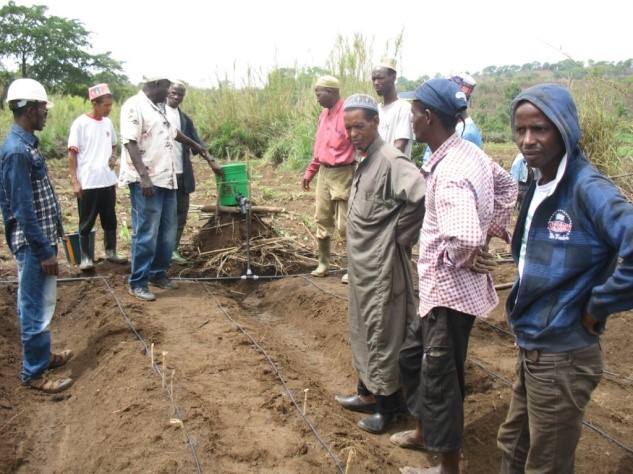 The rains come in the afternoons and late at night trailing into the early morning. The storms entertain with lightening shows and crack of thunder adequate to impress anyone familiar with our continental storms on the high plains. Then after the humid air has squeezed out its moisture, the clouds part and in one rare case the early morning rays peak over the high easterly ridge and splash a glow over the old crumbling French grandstand, sitting sad and forlorn in the abandon parade field now used for football. But before the image can be captured the sun slips higher back into the cloud shrouded haze. One last attempt was made when time allowed, plotting the capture of a sunset across the Dalaba canyon. The clouds were thick again blocking any view of the yellow sphere. Finally in a brief moment a deep red band, crossed a thin segment of the horizon. Rather than turning from yellow to orange and then darker shades of red it simply emerged and then slipped behind another ridgeline to close its day on this ancient continent and march westward across the Atlantic to the new world. Here in our higher latitudes sunrises over the Ozarks Mountains are long and colorful lasting 30 minutes for different shades of violet and purple in the pre dawns before reaching 30 minutes of the reds and orange colors ending up in yellow the late morning risers see. On the high plains the sunsets are longer yet and sparkle in the evening dust and can be enjoyed at leisure. In Africa the events are there, but shorter and difficult to capture. It takes both opportunity and planning. The beauty of this land is important to note and remember. But how to manage?

This is the question, how best to manage the land. To produce and harvest its bounty while ensuring its productivity is improved for future generations. How much of the steep hillsides can be reclaimed with additional soil and manure mixed into hillside mound gardens? This will depend on how much water can be moved, sustainably up from the lower valley streams and wells. And it will depend on how much produce can be marketed down the roads leading off of these mountains. Yes this is a land of giants, a giant called the Guinea Central Highlands.”