Volunteer Stephen Veryser returned from his trip to Mali last week and had wonderful words for Winrock’s field team:

I had a wonderful experience in Mali on account of all of your support, excellent relationships established the host communities. I was so comfortable in Mali due to the fact that everyone we met and worked with was very kind, welcoming, and accommodating. I learned a lot from seeing the way that people live in Mali, especially the agroforestry used prevalently, the tight communities that villagers live in, traditional architecture, and beautiful art and music.

While he was in Mali, Stephen’s training participants wrote a tribute to him on the blackboard before their second day of training:

I was pretty amazed since I hadn’t really told them anything like that directly but what they wrote pretty much described what I thought we were trying to do too. Interesting with the language barrier and all. The M’pendougou community gave me a beautiful traditional robe as a parting gift, and the name ‘Kunje Senougou,’ which means ‘old road’ (as in the long-time relationship between Mali and U.S. –they had hosted a number of Peace Corps volunteers previously) in the initial meeting with them. 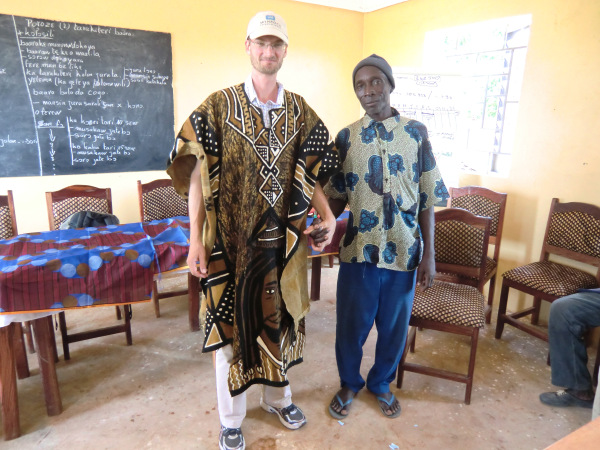 This is the kind of cultural exchange that makes Farmer-to-Farmer such a valuable program. Beyond just a technical exchange and training opportunity, this program builds connections and bonds that are impressionable for both sides.