From Farmer-to-Farmer volunteer Daniel Miller recently provided training on improved small ruminant farming practices for goat farmers in Burma (also known as Myanmar). In today’s blog post, Dan describes some of the things he saw and experienced in country:

“Burma has some of the most interesting experiences that someone could wish for.  The Delta area is well worth the effort of traveling there and sailing around to understand how people make their living, how conditions influence the possibilities, and how potential changes could affect both the environment and the people who depend on it for their very livelihood.

The Delta is the mouth of the Ayerwaddy and encompasses numerous islands that are accessible only by boat.  These islands are big enough for whole communities to live and grow crops, primarily rice.  Because of the ever-present water, tractors just aren’t practical, and water buffalo are the beasts of burden best adapted to work there.  Besides, the mind sort of boggles at the thought of hauling a tractor in a canoe and then unloading it.  Aside: if you ever get the chance to take boat rides through the area, the point at which you are in most peril is not when you are actually going somewhere.  The most dangerous moment is when you are trying to get into or out of the boat without slipping and falling into the mud. 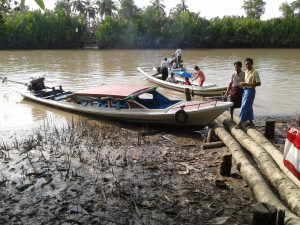 Because rice growers are at the mercy of weather conditions and aim to lessen their risk a bit more, there is a program to begin raising goats to diversify production and income. It has the advantage that goats could easily be raised on these islands because they require much less land than cattle do and they eat a more varied diet, which is readily available.  Also, a big problem with raising rice is that farmers only receive income at harvest, but have expenses all year-long  Raising goats that can be sold at any time  helps farmers maintain a steady income year-round. It also helps to free them of the tender mercies of the money lenders.  In addition, goats are a good business in Burma, because they sell well on the market.  Even if the market is flooded, any of the excess would be sent to China and not result in lower prices in Burma.

Traveling through the waterways, it was interesting to see that each house along the banks has a place for a boat, sort of like every house in the US has a garage with a car in front.

If aquatic environments are not for you, then explore up north around Bagan.  It’s in the dry zone area of Burma where water is important for its scarcity rather than its overabundance.  It is also a center where Buddhism initiated in Burma.  There are some of the more elaborate pagodas there built by early kings, but the thing that most attracts attention is that there are simple brick pagodas everywhere you look that were built hundreds to thousands of years ago by some of the wealthiest families, but have since fallen into disrepair as it were.  There are no records of who built most of them or why.  They just sort of hang in there and add to the ambience. 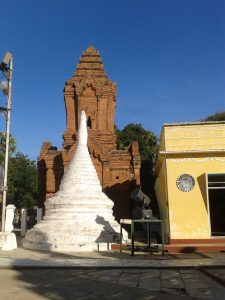 One of the pagodas that does have a known history was built by a king in honor of his wife.  He had been hiding out because he was in disfavor with the previous king and his wife left food daily near where he was hiding so that he could survive.  When he then attained kingship, he built a pagoda in gratitude. 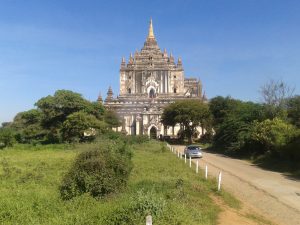 There are all kinds of development projects in the area and, by necessity, there are a lot of English-speaking people.  One of the projects is oriented towards giving rural women a market for their handicrafts.”