Meet the F2F Staff in Guinea

Every Thursday morning at 9:00 CST (that’s 3 PM in Guinea) a Skype call originates from Winrock’s headquarters in Little Rock, Arkansas and connects staff in the US with colleagues in Guinea. The weekly discussion of volunteer assignments and logistical arrangements is often accompanied by the sounds of birds chirping and Conakry traffic in the background. The dedicated and professional individuals on the far end of that call are the reason why so many volunteers who have traveled there before are eager to return to Guinea. 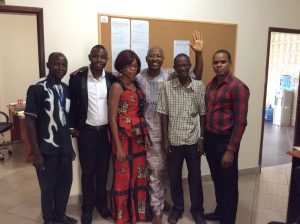 If you haven’t had the opportunity to go to Guinea and work with Winrock International’s outstanding Farmer-to-Farmer staff, you can read a little about each of them below: 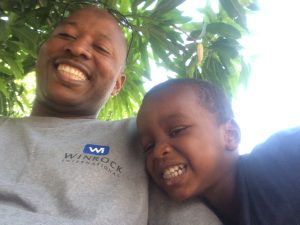 Ibro Diallo is the Country Director. He has been in this role since October 2013. He says, “The most interesting thing about my job is the support I provide to make volunteer assignments a success in Guinea. Sharing experiences and culture between Guineans and Americans.”  One of his most memorable experiences was working with volunteer Edie Shannon as the translator for her assignment to build organizational capacity of a farmers association in Soumbalako. Ibro was responsible for four languages: English, French, Fula, and Arabic. Ibro says of Edie, “She was unfailingly professional, pleasant, and a delight to work with. I learned more with her about volunteer management. It was a very positive experience for me.” 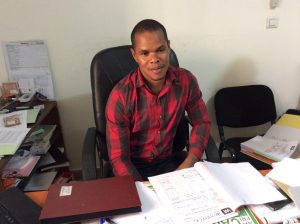 Alpha Amadou Balde is the Finance and Administration Officer. He has worked for the program since November 2013.

Balde is proud of the fact that he holds a key position for both the Farmer-to-Farmer program as well as the USAID/Guinea Agriculture Education and Market Improvement Program (AEMIP) in Faranah. He enjoyed traveling with a volunteer on assignment last summer and did an excellent job acting as translator/interpreter. 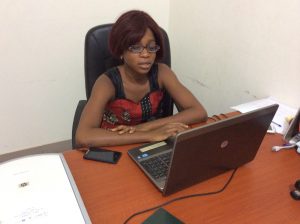 Adama Keita is the Receptionist/ Administrative Assistant. She has been a part of the Farmer-to-Farmer team since June 2014. During her time with Winrock, Adama has learned about volunteer management and has had the opportunity to meet and work with some of our long-time volunteers, like Mary and Bob Albrecht. 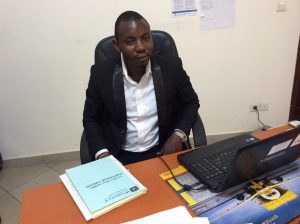 Alpha Souleymane Balde is the newest addition to the Winrock Guinea family. He began his role as Logistician in January 2015. Souleymane looks forward to meeting the volunteers who will begin traveling to Guinea in February. 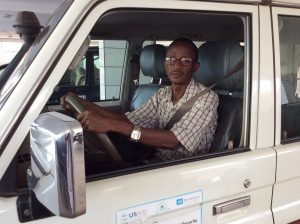 Alpha Saliou Diallo is the dependable Driver for our Farmer-to-Farmer program in Guinea. He began his work there in November 2013. He tells us, “The most interesting thing about my work is that I have the responsibility to drive Winrock staff and volunteers so I can develop relationships with people of different cultures.” 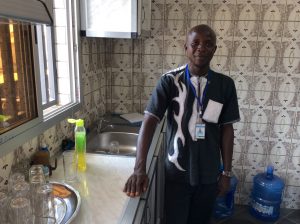 Bilivogui Ampi has the important job of keeping the office clean. Since March 2013 he has taken pride in making sure that staff members and Winrock’s volunteers have a nice environment to work in. Like other members of our Guinea team, Bilivogui has had the opportunity to attend training on volunteer management.

Upon returning from assignments in Guinea, Winrock volunteers consistently talk about the warm personalities of the Farmer-to-Farmer staff. Not only do these men and women play key roles in ensuring the success of the program, they are also ambassadors. They are full of pride in their rich culture, and they are always ready to greet volunteers with a smile and a cheerful disposition that is decidedly Guinean. 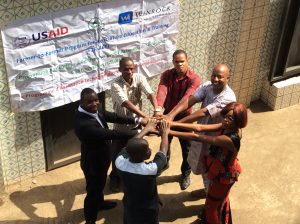