This week’s blog comes from F2F Volunteer, Dr. Malcom Manners, an expert in nursery management and tropical fruit propagation methods. He is a professor and Chairman of the Horticulture Department at Florida Southern College and has completed over 16 volunteer consulting trips around the world.

In late May and early June, 2017, I worked on a Farmer-to-Farmer project with Winrock in the Mandalay area of Myanmar. I’ve worked on numerous other F2F projects, and several of them have involved mango. I have to say this was among the best projects with which I’ve ever been involved!

I flew to Yangon via Orlando, Seattle, and Seoul, arriving late in the evening. I was met at the airport by Winrock staff and taken directly to my hotel. I had a chance to rest the following morning, then meet with the in-country staff in the afternoon. There, we planned out the exact itinerary for the project. The next morning, we flew to Mandalay, where we met with a couple of lead farmers, to interview them about what they perceived to be their major challenges, and what they’d like to get out of the workshops. Their concerns were very similar to those listed in the scope of work, so I felt well-prepared. 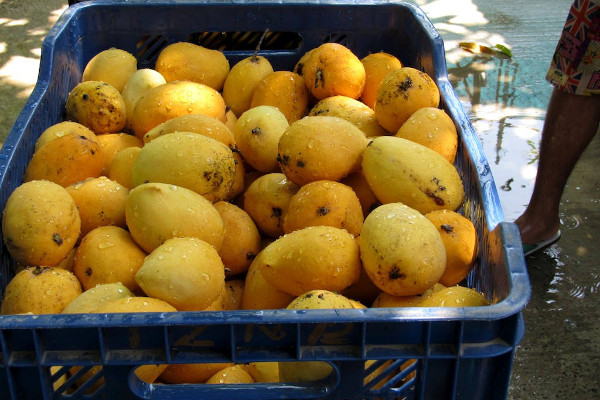 The next day was the first of a two-day training. We really didn’t know how many people would attend — 40 had preregistered, but they thought more would show, perhaps as many as 60. But when the crowd started arriving, more and more came, until we had 150 attendees! We had to move the meeting out of the planned building into an outdoor area. That caused some concern, in case it rained, but it ended up okay. We spent that day talking about nursery production of mango trees — variety selection (for local vs. export markets), seedling production for grafting, grafting techniques, and care of the grafted plants until they are ready for the orchard. The group was particularly interested in grafting. Mango trees in Myanmar are mostly grown from seed, and seedling trees take several years to get into production, growing far too tall for convenient harvesting or spraying. A grafted tree can be kept much shorter and will bear its fruit closer to the ground, and in fewer years, than would a seedling. Also, grafting guarantees that the tree will produce exactly the variety of fruit that the grower wants. Compared to other fruit trees, mango is also rather picky about how you graft it, and many propagators consider it challenging, to get a good rate of success. So we spent a lot of time talking about the fine points of the procedure, and the crowd was on the edge of their seats, in rapt attention! As a college professor, I can only wish my regular students had such enthusiasm for and fascination with the topics we discuss! We ended the day with live demonstrations of the methods we had discussed. A local TV station made a video of the entire event, and I was interviewed by them during lunch time. 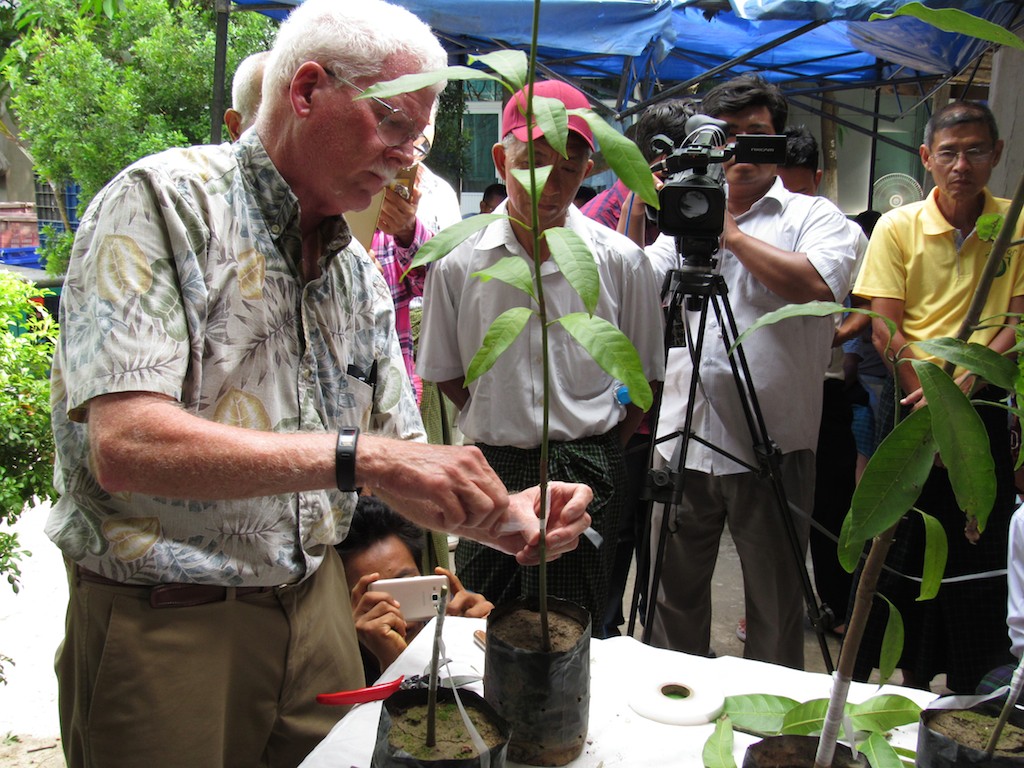 The following day, we had nearly as many people show up for training, so again we were in the outdoor site. This time we did get a bit of rain, but not enough to shut down the program. We discussed production in the orchard — planting trees, tree spacing, plant nutrition and fertilizer programs, pests and diseases and their management, appropriate irrigation practices, and pruning techniques for mango trees. Again, the crowd was totally engaged, and we had another great day! 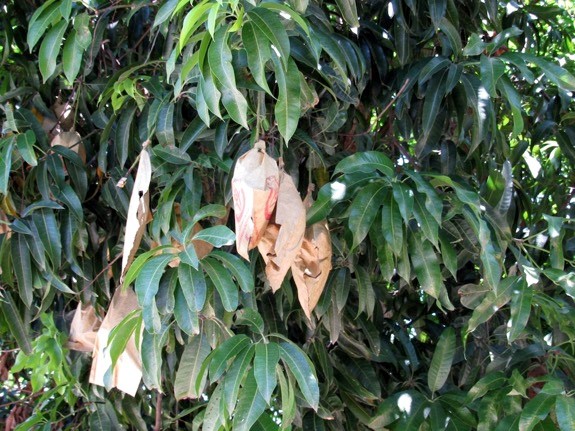 We had originally planned to go to another town to do a similar training, but the hosts there were not able to meet with us, so we changed the schedule a bit to visit with some orange and tangerine growers in Shan State, which is in a higher-elevation area and has a cooler climate. We had a good visit there with a nurseryman, and again, discussed grafting methods for citrus, as well as characteristics of fruit varieties and rootstocks. We also visited some orchards for a discussion of production problems. This was really a discovery mission, with the idea of developing a future scope of work for the area.

From there it was back to Yangon to work on the final report. I’m delighted with the outcome of this project — I think the growers will soon be producing high-quality grafted trees, and within a few years, that will revolutionize their ability to produce a high-quality, high-yielding crop, fit for the export market as well as increased local sales. And that’s what it’s all about!

I found the Winrock staff in Myanmar to be great people to work with — always helpful and thoughtful, and who made sure things happened as they should. I really appreciated that partnership as well.