Secchi Disks, The Power of Low-Tech Tools in Aquaculture Production

I usually prefer to find a way to make assignments more active, but here at the Jal Devi Matsya Cooperative in southern Nepal we spent most of the training in a classroom, discussing the complexities of shallow earthen pond ecology, and carp production through organic fertilization and growth of natural foods. It’s a topic I know well, and which the participants were highly motivated to grasp. The level of involvement by female participants was inspiring. Women are involved in the cooperative at all levels, and they sometimes occupied half the seats in the room. A group of three were brave enough to stop our car one morning, close their umbrellas, and squeeze in with me in the back seat. In the classroom both men and women sit in relaxed positions, often cross-legged, in the plastic chairs. They self-segregate, with women on one side of the middle aisle and men on the other. The women were sometimes less vocal but at other times more willing to speak up to let me know when they understood a concept or when they remained uncertain about something. Women immediately gravitated to the microscope during class exercises, and generally became more skilled at mounting slides and getting plankton, or gut contents, gill tissues, or skin scrapings in view and in focus, and understanding what they see. On many afternoons we left the heat of the cramped classroom by 3 or 4 pm to spend an hour visiting participants’ farms. (This is southern Nepal, at 300 feet above sea level, and midday temperatures often exceeds 100 F.) All co-op members manage ponds and many own land, and I believe that puts them among the wealthiest tier of the Banghusari population. Several were able to speak English but Arun Thapa, Winrock International, Nepal Farmer-to-Farmer Project Management and Communications Specialist, knew that I would insist on translation to Nepali for continuity among the group. 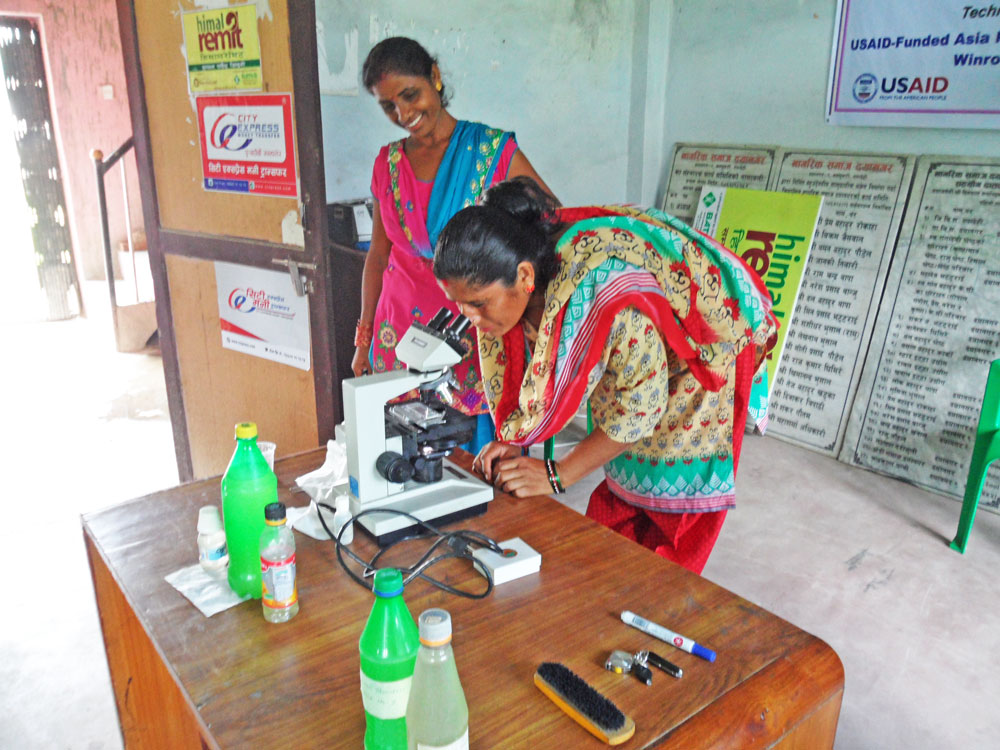 I expect the follow-up evaluations of this training will indicate greater impact than many other assignments I’ve conducted for Winrock. Participants demonstrated extraordinary motivation to implement improved practices. During my initial visit to Jal Devi Matsya, I observed 20 Secchi disks in their storehouse. They were dusty, and it soon became clear that their use was not well understood, and as a consequence I made a major effort to reinforce the use of Secchi disks. They are a key low-tech tool for plankton management. Reliable measurement of plankton density allows the pond manager to adjust nutrient loading with fair accuracy. Participants learned to limit manure and feed applications until plankton density, as measured with a Secchi disk, was 20 to 45 cm. This criteria is well-established throughout Asia for semi-intensive carp polyculture in fertilized earthen ponds. Managing ponds so that Secchi readings are within this range generally leads to high fish yields without creating harmful environmental conditions. After explaining and demonstrating pond management techniques the Secchi disks sold out.

On several afternoons I shopped for mangoes, guavas, stubby bananas and pomegranates under the threat of rain. Mounds of fresh ginger in the market piqued my interest. I took advantage of working wifi and learned Nepal is third in world exports of ginger, and also that the US Animal and Plant Health Inspection Service lists ginger as generally admissible from any source as long as the roots are free from dirt, so I bought some to bring back as gifts. Arun found me a scrub brush. He was most helpful at every juncture.

Hugh Thomforde managed commercial fish farms in the Philippines and Hawaii. He is retired from the graduate faculty of the University of Arkansas at Pine Bluff, Department of Aquaculture and Fisheries. He has completed 8 Farmer to Farmer assignments for Winrock in Africa and Asia. 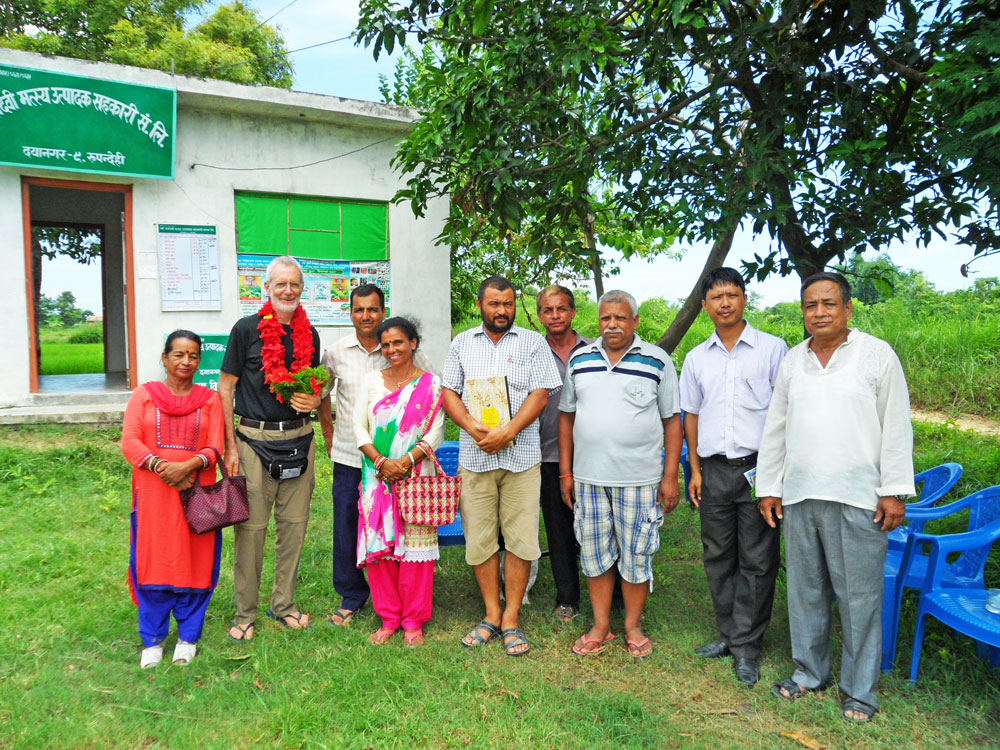