This week’s blog comes from F2F volunteer, Dr. Peter Flanagan, an experienced professional in ruminant farming, including dairy production and reproduction management (goats, sheep, and cattle). He also has extensive international development experience and has worked in South Sudan, Pakistan, Azerbaijan, and India. He currently resides in Guam, where he has established a veterinary clinic. He recently returned from Bangladesh, where he provided training to youth goat farmers and host staff on improved goat rearing techniques, including climate-smart adaptation practices.

“Standing in the long line at the immigration desk at the Dhaka International Airport provided ample opportunity to wonder what the next two weeks would be like. As the assignment unfolded, it turns out that the 2 hours needed to obtain the visa was more likely the result of unfortunate timing rather than an omen of things to come. Once the logistics were under the direct control of Winrock management, travel was easy. No other significant delays hampered the smooth flow of the remainder of the trip.

Upon arrival at the Winrock International office, I received a warm reception by Dr. Kabir, Dr. Rahman, Mr. Badal, and other Winrock staff. The program managers provided clear guidance on what the assignment would entail and were especially thorough when reviewing the safety precautions, which were followed conscientiously by the entire staff for the duration of the assignment. After a long night on several airplanes, it was pure pleasure to plunge into the luxurious comfort of the Bengal Inn, which is located just around the corner of the Winrock offices.

The first thing in the morning, my companion for the next 10 days, Dr. Rahman, joined me for the short flight to Jessore, followed by a 2-hour drive to the headquarters of Satkhira Unnayan Sangstha (SUS), my host for this assignment. For the remainder of the assignment, Rahman was a good-humored companion who assured that everything flowed smoothly from his invaluable translations, to his seamless coordination of various activities, to his willingness to provide insightful cultural information.

We were greeted warmly by the SUS staff, including Mr. Sk. Eman Ali, the founder and Executive Director of this NGO, which has focused on improving people’s livelihoods in this rural area in southwest Bangladesh. Over lunch, Mr. Ali described the wide range of activities that the 400+ employees of SUS have been involved in over the past 30 years. Lunch was the first of many, many scrumptious meals served by the SUS kitchen. I never would have guessed that I would gain weight on this assignment, but the abundant fish, meat, vegetables, and fruit were quite simply too delicious to resist. After lunch, we joined a group of SUS employees to visit a small homestead and a local village to observe typical goat husbandry practices in the area. Of course, the villagers were as curious about me as I was about them. Wherever we went we were surrounded by local people who were ready to answer my many questions about their daily goat-rearing practices. I slept very well at the SUS headquarters, where the accommodations were clean, comfortable and secure. 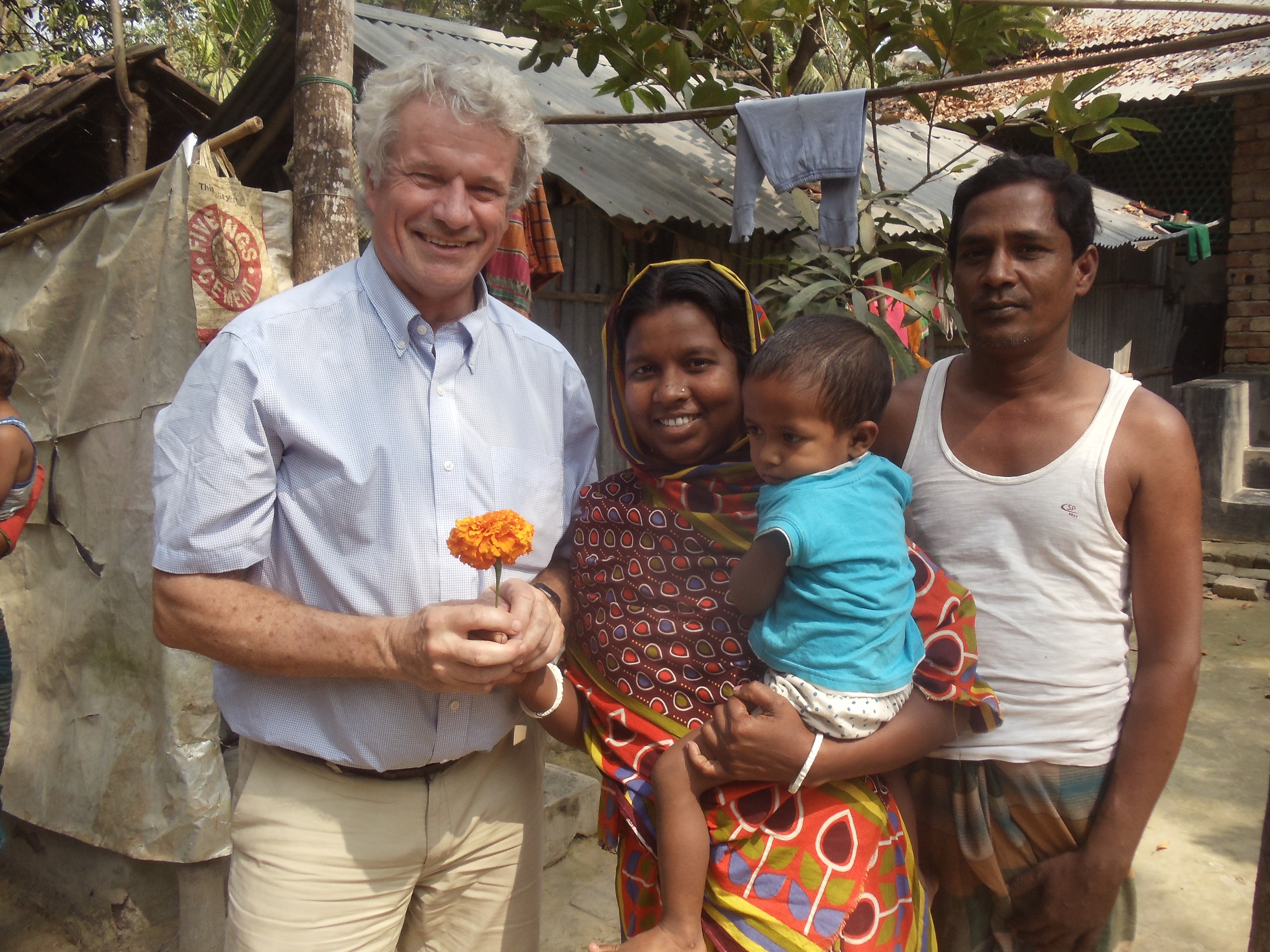 Dr. Flanagan is welcomed by goat farmers during a field visit

The next day was consumed by site visits to villages and households, where goats are raised for supplemental income. The visits provided a good opportunity to observe and discuss routine husbandry practices, including feeding, housing, and medical care. After lunch we traveled 1 hour south to a homestead located in the flood areas. The farmer reported that his small plot of land adjacent to a medium-sized canal is flooded annually, and thus he is only able to harvest one crop of rice each year. As a result of the flooding, the land is increasingly salinized. A taste of the dirt revealed just how salty it had become. His goats were left to scrounge what they could from the sparse vegetation that managed to grow. The farmer described in detail how he has to relocate his household during the rainy season every year.

It was remarkable to see in this case and many other cases, just how vulnerable the villagers are to the indiscriminate effects of climate variability. Despite the precarious living conditions, the Bangla welcome was warm, patient, and informative wherever I visited. 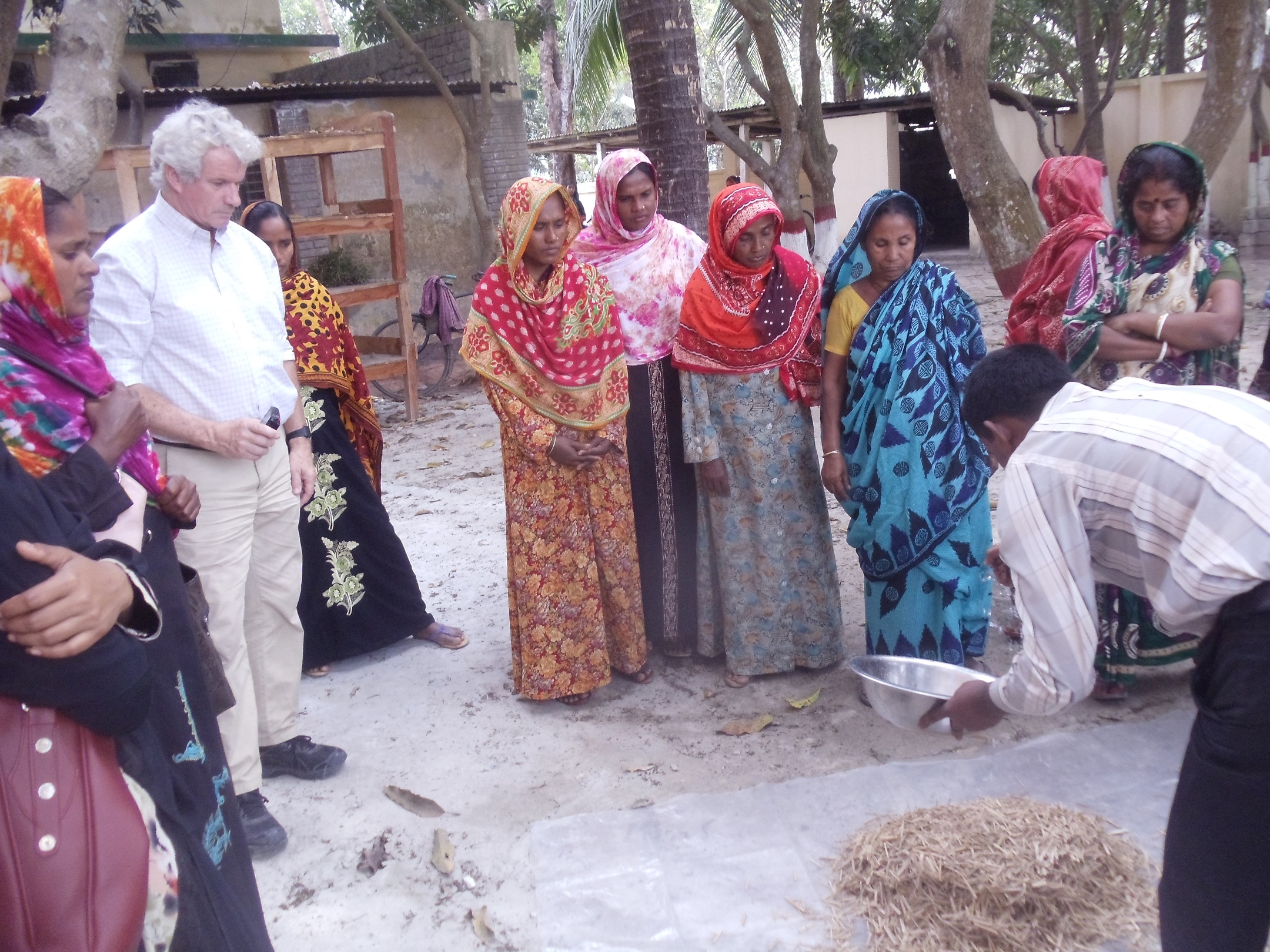 One evening after a training day, Mr. Sk. Eman Ali invited Dr. Rahman and me to participate in an interview session at the Tala Press Club. Before attending the meeting, Mr. Ali guided us through the evening market to show me the items that were available for sale. It was an excellent tour thanks to the many introductions to the local merchants, who all seemed to be very familiar with Mr. Ali and his tireless efforts to improve living conditions. The reception at the Press Club was even more welcoming as several journalists and even more community leaders were in attendance to ask questions about the Farmer-to-Farmer program as well as several questions regarding cultural differences between Bangladesh and the United States.”