Mr. Robert Spencer, a small ruminant specialist from the Alabama Cooperative Extension System, recently returned from his second visit to Burma (also known as Myanmar) as volunteer for the USAID-funded Farmer-to-Farmer program. During Mr. Spencer’s first visit, he worked with the Myanmar Livestock Federation to help Burmese farmers enhance their knowledge in two areas: nucleus goat farming and meat quality analysis. On his latest assignment, he teamed up with the Myanmar Livestock Federation for a second time to present additional farmer trainings. This time, he was asked to cover three topics: small ruminant farming operations, livestock business management and goat milk soap making. Because of this, he referred to himself as “a man with three hats.”

During his assignment, he traveled to the cities of Yenangyaung and Butalin where he spoke to goat farmers about improving their farming operations through proper nutrition, reproduction techniques, and disease management practices. While there, he also worked with women in the village by showing them how to add value to their farm products by making goat milk soap. Realizing a large potential market for soap in their area, trainees in Yenangyaung were especially excited to learn about soap making from Mr. Spencer.

Mr. Spencer then traveled to Mandalay to speak to poultry producers about improving their business management practices. During these trainings, he taught them about developing business plans and enterprise budgets, as well as how to track their earnings through cash flow statements and balance sheets. While comparing enterprise budgets for broilers and layers, the farmers were surprised to see the difference in profits between the two operations. With the majority of farmers working in both areas, they will likely adjust their future production to better account for profitability.

Mr. Spencer’s visit culminated with a visit to the Myanmar Livestock Federation office to present his overall findings and recommendations to their members. Following his presentation, he provided a soap making demonstration for MLF members which was filmed by the local television station, SkyNet. His soap making documentary also aired on the Agriculture, Livestock and Forestry Channel, enabling people all across Burma to learn the process of soap making from Mr. Spencer.

Here are a couple of photos of Mr. Spencer in action: 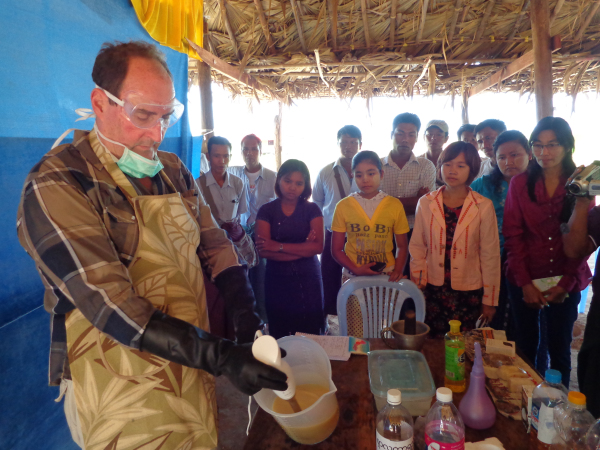 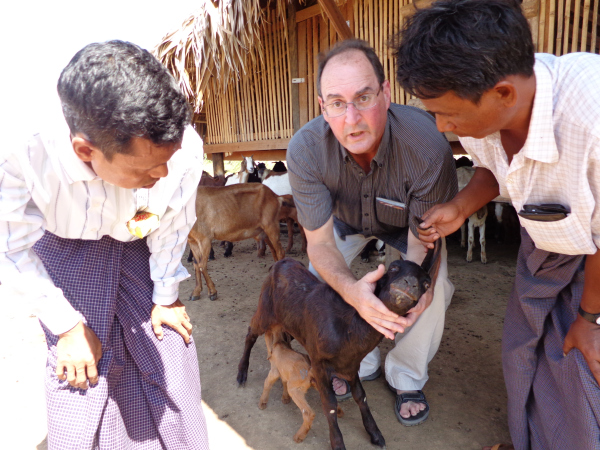