The Ultimate Reward: Adoption of New Ideas and Practices

Starting out with the Farmer-to-Farmer Program in Bolivia in 1987, I have had a long history of many projects in many countries. Most of my work has been in Latin America since I am fluent in Spanish from my wonderful Peace Corps years in Guatemala 40 years ago. A few years ago I decided to branch out into other regions with my work in soil erosion, agroforestry, and organic agriculture. In 2014 I accepted my first assignments in Asia to provide assistance in Burma and Bangladesh. In Bangladesh, I worked in two small villages with a host named, “Hunger Free World,” on organic farming and farmer made input production. I was prepared for the beautiful green landscape I learned about through photos in books and magazines, but what I was not prepared for were the amazing people who befriended me in the time honored tradition of “being the guest.” I am looking forward to hopefully coming again in the near future. 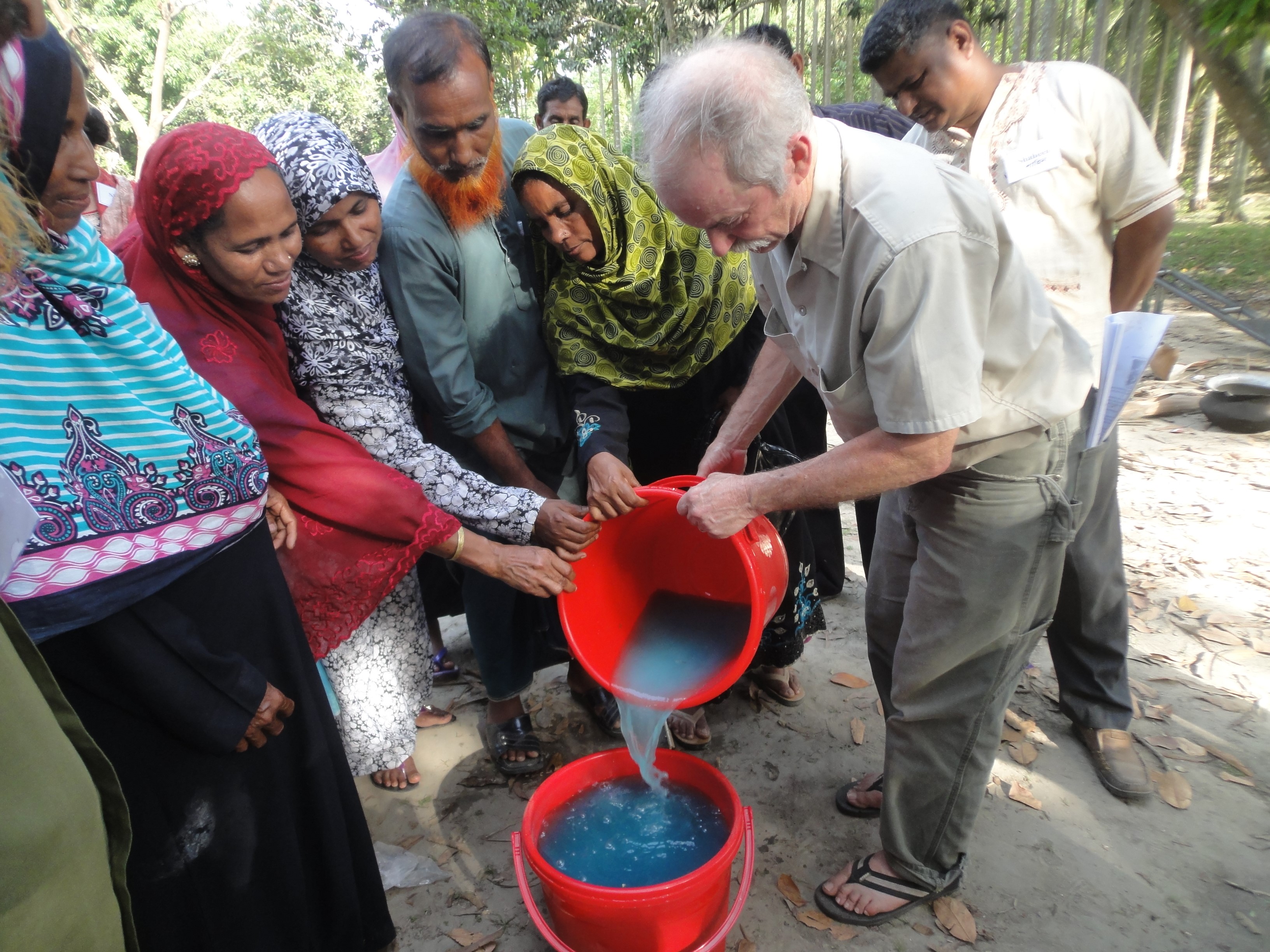 F2F volunteer, Charles Mitchell, in Bangladesh demonstrating how to prepare an organic fungicide mixture to spray on vegetables to control fungal diseases

Small farmers around the world are eager to learn about organic farming techniques and ways they can improve soil and control diseases and insect pests using natural methods and safer inputs for the environment and human health. Profitability can improve since costs of production can be lowered. My three to four day workshops generally attracted around 30 participants including farmers, NGO staff, and a few government/university personnel. We spent the mornings in classroom discussions and the afternoons in hands-on demonstrations of fertilizer, fungicide, and insect repellent production. This is where the participants got really excited, but I made them sit through the classroom part to give the foundational principals of organic farming. Organic farming is more than input substitution of synthetic chemicals with natural products. Soil building comes first, then prevention, then inputs such as fertilizer and pest control materials. Farmers, including American farmers, seem to want to first reach for the bag or the bottle. Organic teaches a different way of thinking, where these products come last and not first.

In Myanmar, I volunteered to teach organic agriculture. Part of my workshops entailed hands-on demonstrations of farmer made input production. These were well received with enthusiasm. There were usually one or two participants who were especially keen to understand these formulations. 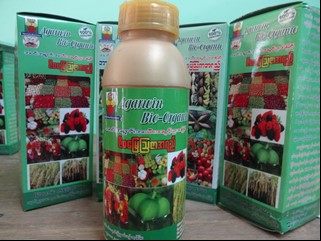 On my first trip, one farmer in particular, was at my elbow the whole time recording in notes and video everything I said. On my second trip, a year later, to do similar workshops in a different part of the country, I was asked if I wanted to go see a farmer who seemed to be doing some of the things I was talking about. We went, and to my surprise, there was that same farmer, U Myo Naing, who was managing an organic farm with 5-6 other employees and using many of the organic preparations I had taught including: fungicides, insect repellents, bio-fertilizers and Effective Microorganisms(EM) compounds. Wow, I thought, rarely does a volunteer actually see their efforts put in action, due to the short term nature of our work! I recently returned to Myanmar for a third time, and the Winrock staff informed me that they had recently visited U Myo Naing’s small facility where he was manufacturing and selling various organic inputs on a commercial level.

This rewarding view occurs rarely in a short-term volunteer’s world. These are the small things, and satisfactions which happen in varying degrees. Most pleasures in volunteering are the daily interactions we are given in working with people of different cultures, but sometimes we are rewarded with the ultimate, and that is adoption of some of our ideas! 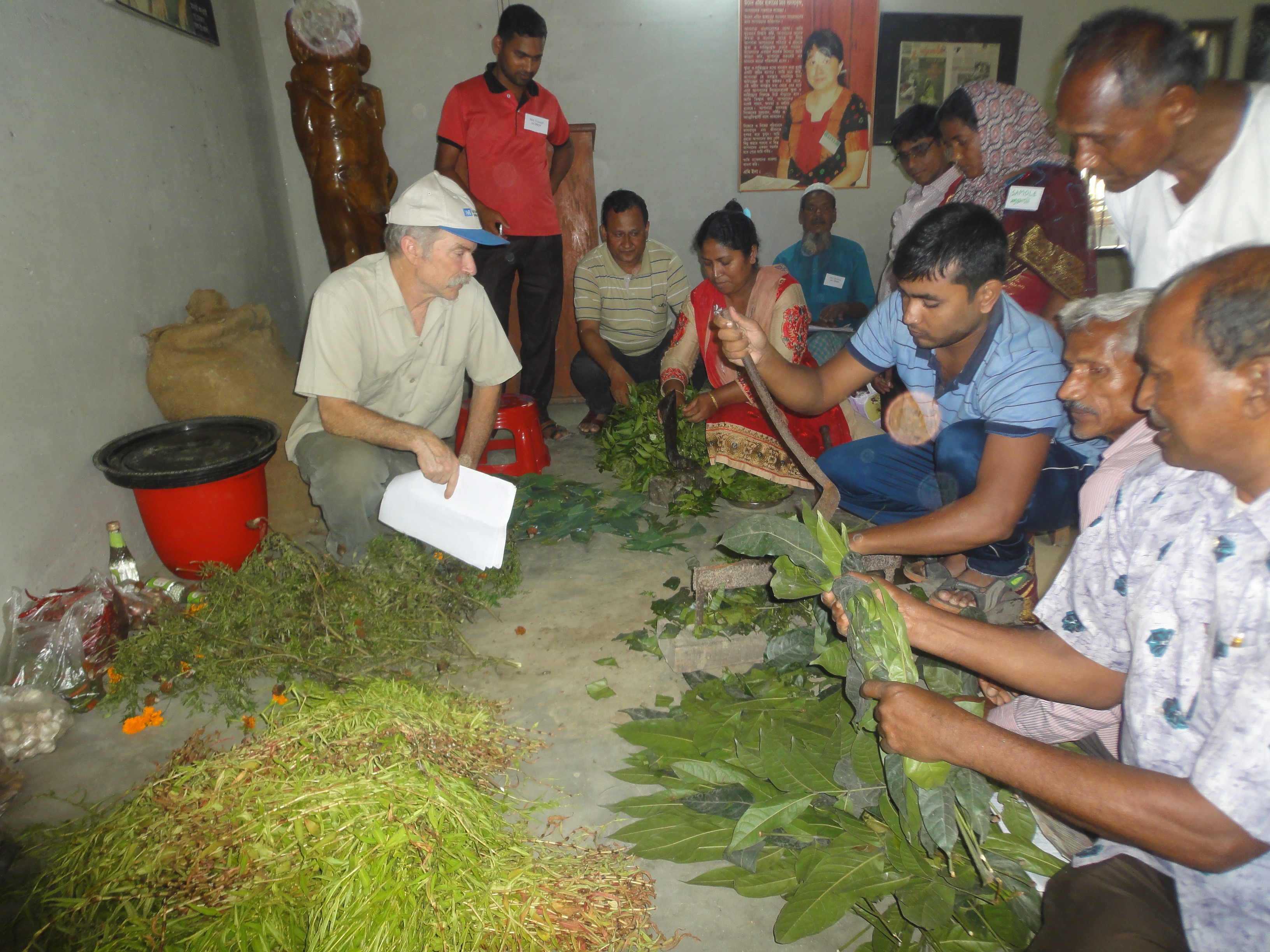 Charles Mitchell in Bangladesh giving instructions on how to prepare an insect repellent using organic ingredients and various plant leaves to spray on any kind of plant or crop to control insects.