In honor of the 4th of July holiday, we are glad to take a moment to reflect (again) on stories of Americans sharing their blessings and demonstrating the generosity and spirit of the American people. In the last year alone, 113 Winrock volunteers from 45 U.S. states have dedicated their time and energy to helping others in need around the world.

One of our volunteers, Bob Cooperrider, returned recently from his second volunteer trip in Bangladesh. –A trip that he and his wife paid for on their own, following a particularly inspirational encounter at the end of his Farmer-to-Farmer assignment with us. Below, Bob tells the story of how this began…

“Hearing that a US volunteer would be in town, the headmistress of a local international primary school had requested I come on Monday afternoon to talk with them for an hour about America. Whoa, that’s a pretty big topic. So that morning I prepared a slide presentation of pictures of mountains, lakes, etc. from our vacation pictures I have with me. Then I added pictures of our family and some of our activities. I figured I’d spend about 25 minutes with the slide show, take questions, then be done. Was I wrong. The students are learning English as part of their studies.

There were lots of questions during my slideshow. Then after each student and teacher greeted me individually I thought it would be over. But then one of the students asked me to sing a song. That broke us loose. I sang “The Bear Went Over The Mountain”, then it was “Old MacDonald’s Farm” by request with all the animal sounds. The music teacher brought out their harmonium which she added to the songs. The students sang “We Shall Over Come” with each verse first in English then in Bangla. The singing continued with national anthems (I even managed the high notes in the Star Spangled Banner), then they finished up with some of the oldest girls singing some Lalon Shah songs.

The headmistress has been searching awhile for a native English speaker to come be a guest English teacher. She really would like me to come be a guest teacher. She would also welcome Deni [my wife]. I told her we couldn’t come for a whole year or two as she’d like. But we might be able to come for a month or so. It would be so much fun. We would hopefully stay in some of the students’ home. Deni wants to come to Bangladesh now that I’ve had such great experiences. The Bangla people are so friendly and welcoming. And it’s a beautiful country. It would be a great winter break to return to Bangladesh. The two hours I spent at the SunUp International School was the highlight of my trip.”

These cultural interactions, the chance to share what it’s like to be American, the moments of reflection on all that we have to be thankful for in our great country, and the awareness-raising —and oftentimes life-changing-– exchanges with others in their home country… These are the building blocks of cross-cultural understanding, memorable demonstrations of patriotism and humility all at the same time. This is what international volunteering is all about.

Read all about Bob’s Farmer-to-Farmer assignment in Bangladesh and his subsequent volunteer trip with his wife on his personal blog.

Love and Respect for the American People

Winrock’s F2F staff in Nigeria recently re-visited some of the host organizations that received volunteer support over the last year. These visits are a way for us to see first-hand how the volunteer trainings have impacted each organization.

Sometimes the feedback is especially inspiring.

The managing director from Ogbuka Green Merchandise, a Nigerian agribusiness that received training from volunteer William Symons in June 2012, had this to say:

“I was shocked to see an American come and volunteer his time to strengthen our capacity. The Volunteer was not even bothered by how obsolete our equipments were and how disorganized our workshop floor was but rather gave us tips on how to make the best use of what we have and how to re-organize the work space. This has changed our perception and increased our love and respect for the American people and the government of the United States of America.”

I think all of our volunteers would agree that these assignments also build love and respect for each of the countries where we are working, as well. –Both sides benefit, sometimes in immeasurable ways!

Joe Sullivan (who has volunteered six times with Winrock’s Farmer-to-Farmer program) wrote a response so poignant, it deserved its own blog entry. Thank you, Joe, and Happy 4th of July!

There are a couple of sections of President John F. Kennedy’s 1961 inaugural address that mean a lot to me and seem so consistent with what the Farmer-to-Farmer program is doing. The first is this:

“To those peoples in the huts and villages across the globe struggling to break the bonds of mass misery, we pledge our best efforts to help them help themselves, for whatever period is required — not because the 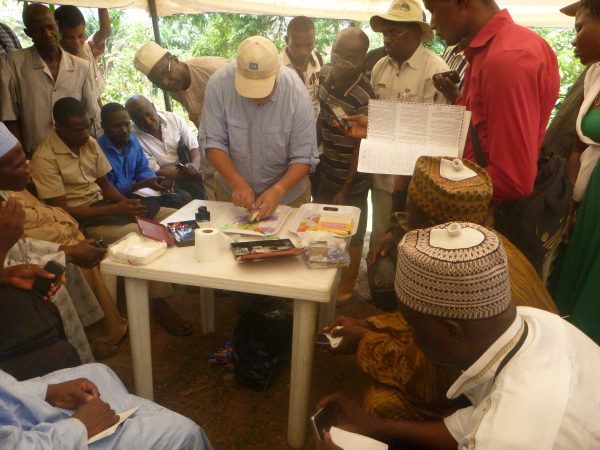 Communists may be doing it, not because we seek their votes, but because it is right. If a free society cannot help the many who are poor, it cannot save the few who are rich.”

“Because it is right” –What better reason can there be? But America’s gift does not come without a cost. Freedom is not free nor is there a way out of poverty without effort. Americans go overseas in the Farmer-to-Farmer program and in Peace Corps to teach people how to help themselves, to give them a hand up, not a hand out, to lift themselves out.

“My fellow citizens of the world: ask not what America will do for you, but what together we can do for the freedom of man.”

“Finally, whether you are citizens of America or citizens of the world, ask of us the same high standards of strength and sacrifice which we ask of you. With a good conscience our only sure reward, with history the final judge of our deeds, let us go forth to lead the land we love, asking His blessing and His help, but knowing that here on earth God’s work must truly be our own.”

On my last two assignments with Winrock and the Farmer-to-Farmer program, last year in Mali and this year in Nigeria, both of my hosts told me that I was like a father figure to them. Relative to gauging the success of your assignment, that is a pretty good measure when someone of a different race, religion, nationality says that to you. Citizens of the United States and citizens of the world have come together making “here on earth God’s work…truly…our own.”

Not everyone has two years they can commit to meeting the world where they live and teaching them how to help themselves as a Peace Corps volunteer. But sooner or later, almost every US citizen has a few weeks to a month to bring knowledge or to teach a skill to a citizen of the world so that together, as Kennedy said, we will bring about God’s work on earth. There is not anything I would rather be doing than this with my brothers and sisters whom I have met and have yet to meet around the world.

This 4th of July, I will be spending in Bangladesh helping women’s groups gain food security and financial self-empowerment by teaching them how to raise fish and shrimp. Patriotic, perhaps, but as Kennedy also said, it is the right thing to do and I love it…

In honor of the upcoming 4th of July holiday, we cannot help but reflect on the symbolism of this important day. All of us here at Winrock are very proud to support such great American volunteers in their quest to help others and participate in people-to-people exchanges that can forever change who they are as individuals, as US citizens, and as citizens of the world.

We asked some of our volunteers to share their thoughts on the 4th of July and the values that this holiday represents: freedom, patriotism, service –and how these values have affected them as an international volunteer (and vice versa). They have offered some truly inspiring reflections:

“I was either too young or too old to be called to arms, and it took me a good long time to realize that I could serve my country in a better way. Using my life’s work experience, I am able to help people in deserving nations by volunteering to serve as a consultant to the USAID Farmer-to-Farmer program. And, the truth of it is, it’s the best, most rewarding, fun job I have had in the 50+ years I have spent in the food business.” –Bob Corshen (Farmer-to-Farmer volunteer in El Salvador, Kenya, and Lebanon)

“I enjoyed my volunteer trip and time working with Winrock overseas on Farmer-to-Farmer honey bee projects in Africa and the opportunity to share our American values while helping people in a developing country to improve their lives. The people really appreciate the generosity and compassion.” –Dan Mayer (Farmer-to-Farmer volunteer in Ethiopia and Nigeria)

“Americans are some of the most generous people in the world – not only in terms of financial donations, but in volunteering time for worthwhile efforts. My Farmer-to-Farmer volunteer experience created lifelong relationships with ‘kindred spirits’ who are working to make a difference for small farmers. I believe all Americans can contribute and strongly encourage everyone to consider how they can make a difference!” –Kathy Colverson (two-time Farmer-to-Farmer volunteer in Kenya)

What better way is there to celebrate and embody freedom, patriotism, and service than by helping those who have less than we do?

We thank all of our volunteers for so much heart and dedication!

“An individual has not started living until he can rise above the narrow confines of his individualistic concerns to the broader concerns of all humanity.” ― Martin Luther King Jr.

Today is the Martin Luther King Jr. holiday, and this weekend marked the National Day of Service. In honor of both, here are some photos of some of our Farmer-to-Farmer volunteers in service around the world: 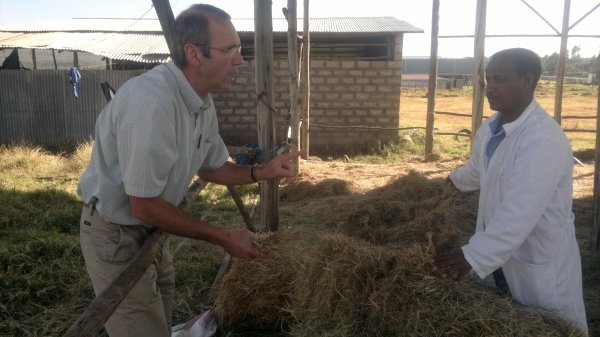 Bill Goeres on a dairy farm in Ethiopia 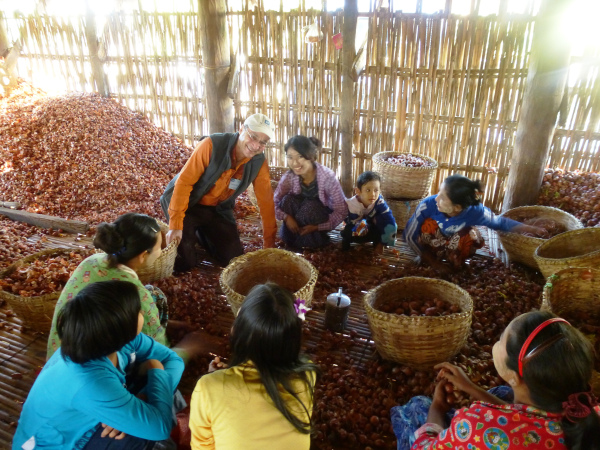 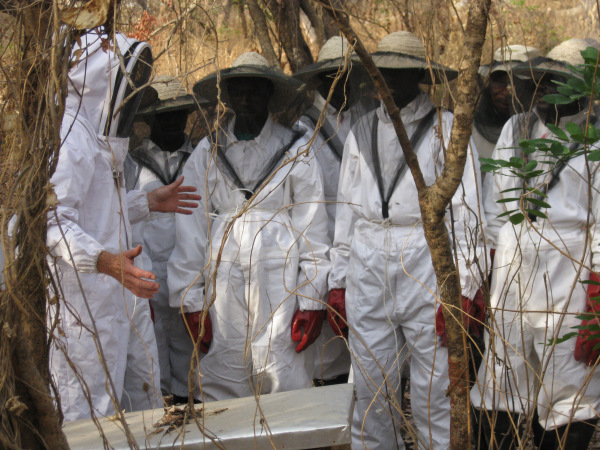