Water from the Sun

From the hillside where Bhim Gurung stands on a sodden August afternoon, water would seem to be the least of his worries. It’s not just that a light drizzle continuously falls on the already glistening trees and grass that surround Gurung’s small village of Taule in the southern province of Surkhet in Nepal. It’s also the continuous and quiet hum – like the sound of faraway traffic – of a nearby river that serves as the background noise to life in this farming village.

But in some ways, the calming sound of the flowing water just 100 meters or so downhill from the village has been a taunt. For years, Gurung and other villagers grew wheat, corn and rice, though only just enough to feed themselves. And although the sound of water was omnipresent, one reason Gurung didn’t grow vegetables that could be sold at market was because there was no way to get water from the river up to the fields. “We were totally dependent on the rainfall,” says Gurung.

But things began to change for Gurung’s village two years ago when it started working with the U.S. Agency for International Development (USAID)-funded Knowledge-based Integrated Sustainable Agriculture and Nutrition (KISAN) project. KISAN field staff helped Gurung and other smallholder farmers make the transition from subsistence to commercial vegetable farming by helping implement new techniques and technologies – including the use of plastic houses and raised beds – that replaced less effective traditional cultivation practices.

The training helped Gurung and others become commercial vegetable farmers, which greatly increased their income potential. Still, as helpful as the KISAN training was, the issue of reliable access to water to irrigate crops remained a problem. In that regard, Gurung was like many small farmers in Nepal. In fact, in a survey of the tens of thousands of farmers receiving training and assistance from KISAN, which is implemented by Winrock International, the top constraint to increased productivity and income was irrigation. “Irrigation is a game changer for agricultural households in Nepal because they can grow during more seasons outside of the monsoon season and yields can be tremendously higher,” says Phil Broughton, chief of party for the KISAN project.

The answer to the challenge of ensuring steady access to water was found by looking upwards towards the sun. Gurung says a KISAN staffer told him that a solar-powered irrigation system would help transport 10,000 liters of water per day uphill from the nearby river to the fields where it was needed. Thanks to assistance from Winrock’s Clean Energy Group, technical hurdles like finding the best site to install solar panels was not a problem. The main challenge was coming up with the $5200 required to pay for the solar panels and the mounting system required to install them. “The problem of our installation of the solar pump was only money,” says Gurung.

KISAN helped surmount that financial hurdle by arranging a cost-sharing agreement in which eight farmers took out a loan of $3,000 from a local farmers’ cooperative, which would be paid back thanks to additional income from vegetable sales. In addition, Winrock, KISAN and the local Veri Ganga Municipal government contributed grants totaling $2,200. With labor supplied by the farmers and technical expertise from Winrock, the solar irrigation system was installed in May of 2015. 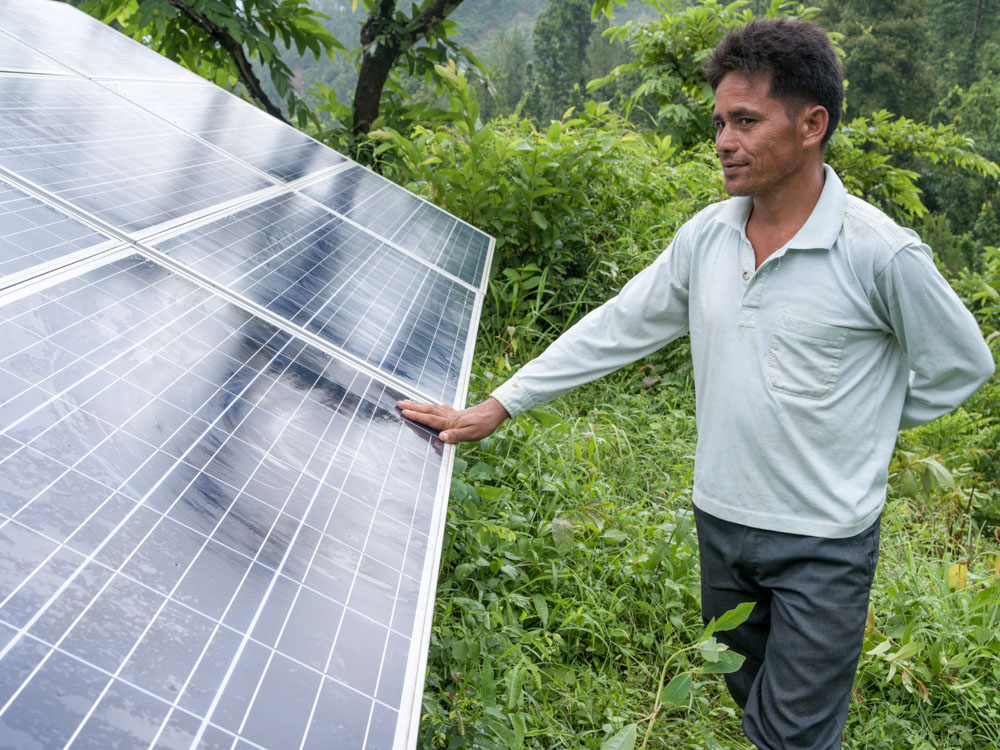 The difference consistent access to water has made in the amount of vegetables Gurung and his fellow farmers can grow has been dramatic. “After the solar pump the production has increased 70 or 80 percent,” says Gurung. Household incomes have also risen between $300 and $2,750 annually, allowing the farmers to pay off the loan for the solar irrigation system. Gurung has started using some of the extra income he earns to pay for his grandchildren’s education.

These days, the sound of the river can still be heard all around the village. But no longer is it a sound of frustration. It’s the music of opportunity.