Leaves for Sale: launching a market study for a traditional product

Ariel Dansky is volunteering with us in El Salvador for two and a half months. She chronicles her time in country on her personal blog. Dansky is assisting the Salvadorian Chamber of Commerce with expanding the market for plantain leaves, through a grant from the UNDP. In her blog, she looks at both the cultural and technical side of working in El Salvador.

Check out her most recent entry here! 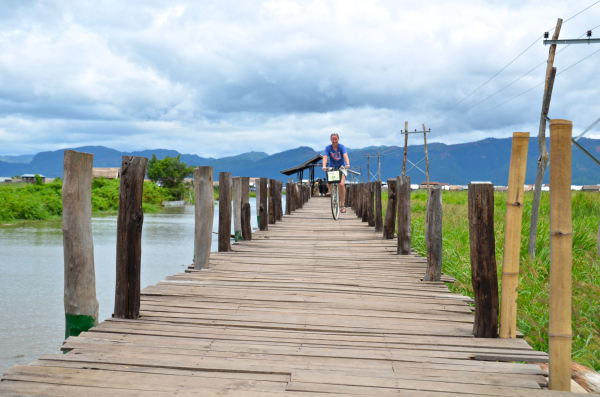 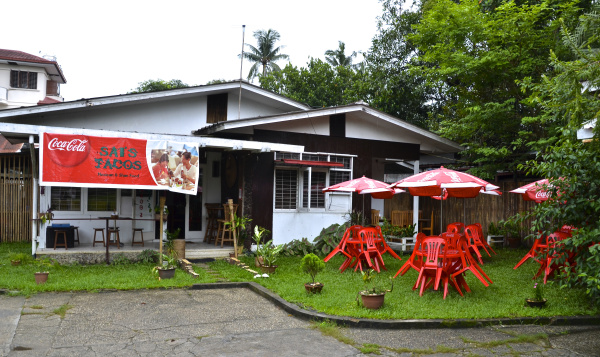 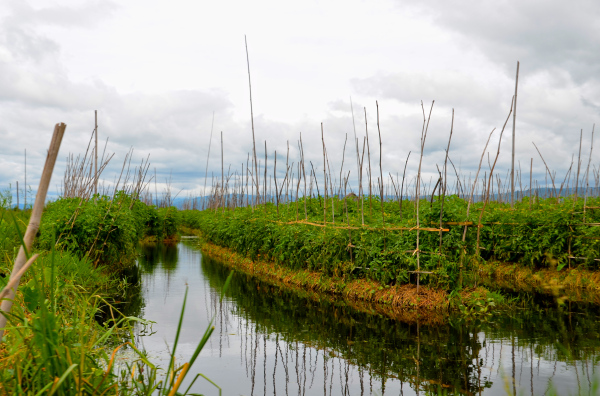 Burt Hicks is finishing up his first volunteer assignment with Winrock in Myanmar (Burma). He describes his rewarding experience below:

Over the course of the past two months, my wife and I have worked as volunteer consultants in Myanmar with Winrock International through the USAID Farmer-to-Farmer Program. While I was the one that was supposed to spend the summer providing knowledge and training to farmers and processors within the fishery sector, as I reflect upon my time here, I believe that I have received more than I gave. This is not because of a lack of effort on my part; rather, it is because of the way in which the people with whom I have had the pleasure of working have treated me.

My assignment has given me the opportunity to travel extensively throughout the Ayerwaddy River Delta. This is an area where the land is extremely fertile, and where people have generations of experience in agricultural enterprises. If the farmers here can obtain access to capital, better seeds and better technology, the aquaculture and agricultural sectors in Myanmar has the potential to see rapid growth – and this will be one of the major areas to lead that growth.

Traveling here makes one feel that they have traveled back in time 80 or 100 years ago. Farmers cultivate the plots of land with plows powered by the brute strength of two water buffalos or cows. They transport their harvest in small wooden boats loaded to the brim. And they tackle each day with an abundance of optimism, even when it seems – at least, to my biased Western eyes – that life could be so much easier for these wonderful and beautiful people. 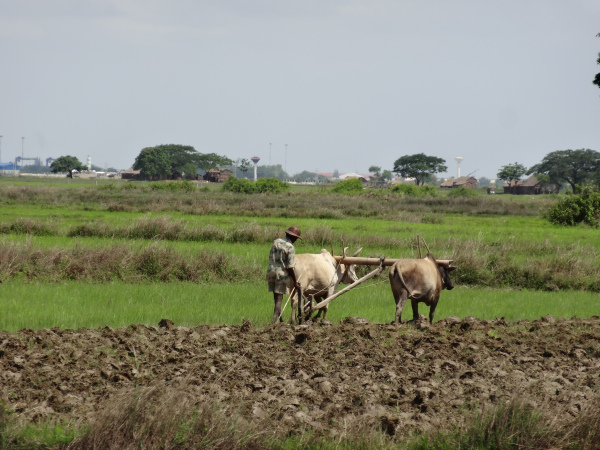 Plowing a filed the hard (and old) way 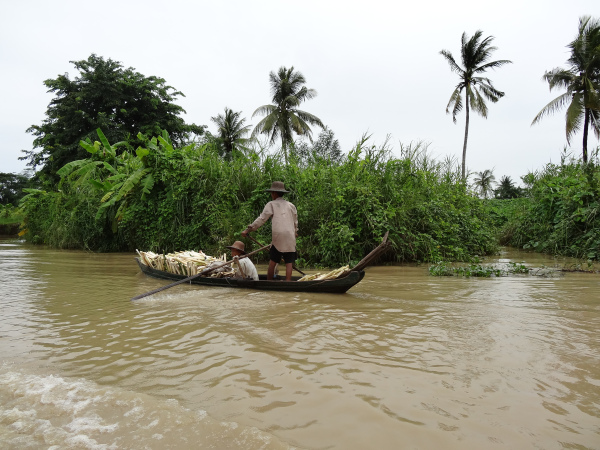 Local farmers transporting their harvest up the river

Even though the average annual family income in this region is far less than $1,000, I am treated to tea and a meal fit for a king at each of my stops. One of my favorite dining experiences was in the small town of Twante. On this day, I had visited the fish farms owned by the chairman of the regional fish farming association to discuss a transition from a low-value fish to tilapia, a fish that has the potential to increase his farm’s income significantly. After telling me about the devastating impact Cyclone Nargis had on his operations and how he is still struggling some five years later, he invites me to join him and his family for lunch. I was expecting some rice and deep fried whole fish, but when I stepped-off the boat into his house built on stilts, the table was covered with several dishes made from local produce, various types of curries, three different types of fish, loads of fresh fruit and, of course, rice. I was absolutely blown away by his generosity. And this type of thing happened on numerous occasions over the past several weeks. 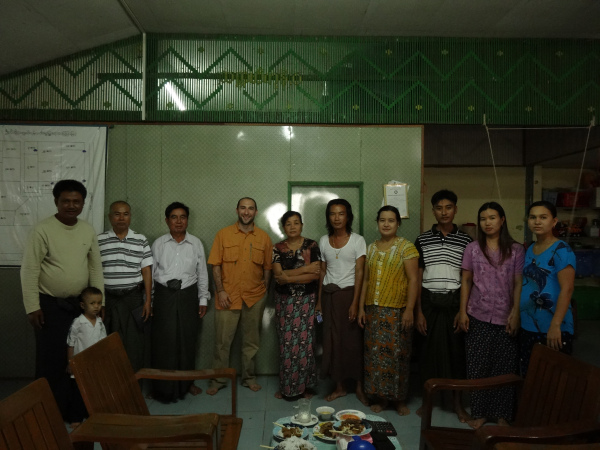 Sharing a meal with the fish farmer and his family

I will leave Myanmar at the end of next week. I believe my assignment will have a positive impact for a number of businesses operating in the fishery sector, although I hope to have the opportunity to come back here and do more. Needless to say my time in Myanmar has been a great lesson on giving more than I receive. 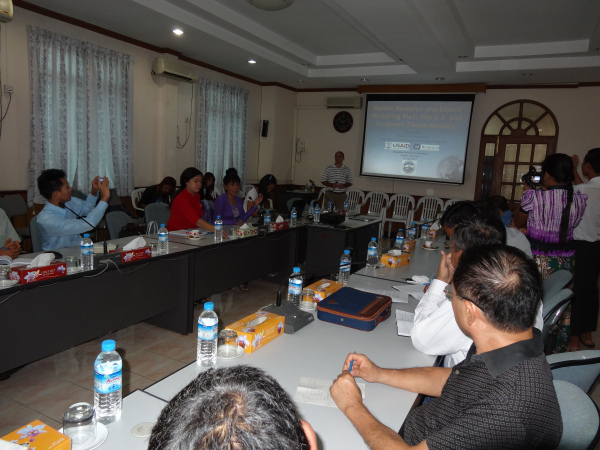 Presenting to the Myanmar Fisheries Federation

Volunteer Joe Sullivan describes one of his hosts in Mali to be “a real spark plug who worked harder than anyone and had the will and commitment to overcome all obstacles.”

Inspired by this host (named Yacouba) and committed to the relationship that formed while he was volunteering in Mali, Joe recently purchased and shipped new equipment to help Yacouba continue to make improvements in his fish processing business.

Joe explains, “I am very impressed with how hard Yacouba works and how committed he is. A few dollars to help someone like him out is money well spent. I love helping people like that.”

From our perspective, Joe is a bit of a spark plug himself, showing continued will and committment to making a real difference.

Thanks so much, Joe! Your generosity is very much appreciated!

Dinner at the Gleanery: A community supported restaurant

Demetria Arvanitis, VTA Program Director, and Howard Prussack, an organic farmer and F2F volunteer, had the chance to dine with Chef Ismail Samad at the Gleanery, located in Putney, Vt. With menus changing rather frequently (sometimes daily), the Gleanery is a community supported restaurant that connects local farmers, producers, and consumers by offering the best of the best of local and seasonal foods. The restaurant also offers “irregular” or surplus crops that some consumers might shy away from, by providing an extensive canning and preserving program to farmers.

The Gleanery has contributed to sustainability and the viability of the farmland and has offered consumers an enticing and gracious experience. The operational model of the Gleanery is the same as an agricultural CSA, in which customers pay farmers in bulk for produce at the beginning of the season, and in return receive weekly boxes of farm fresh products. The Gleanery redeems memberships in the form of monthly credits that can be used at the restaurant. By purchasing memberships, community members help raise start-up capital and the restaurant redeems memberships for monthly credits on food. In return, the community benefits by having a fabulous place to eat!
http://www.thegleanery.com