The nation is integrating GHG accounting into policy and decision-making — and Winrock is part of the process. 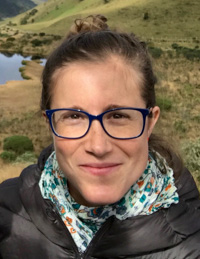 As my third trip to Malawi in a year came to an end, it was apparent that we have reached a milestone that many might not have thought achievable when we started this project five years ago. On April 4, I attended the launch of Malawi’s new National Greenhouse Gas Inventory System (GHG-IS), where Government of Malawi officials delivered speeches fully endorsing the system. Their message was clear:  accurate accounting of greenhouse gas (GHG) emissions is a pivotal part of helping the nation make good on its commitment to pursue low emissions development strategies and improve resilience to climate change.

Categorized by the UN as a Least Developed Country (LDC), Malawi is a small and landlocked nation with high population density. Most Malawians rely on rainfed agriculture and are highly vulnerable to economic and environmental shocks, as evidenced by the devastation that Cyclone Idai brought to the region this past March.

This vulnerability attests to Malawi’s need for climate finance, technology transfer and investment to grow sustainably. Recognizing this, Winrock has been supporting the Government of Malawi under the Tetra Tech-led, USAID/Malawi-funded Protecting Ecosystems and Restoring Forests in Malawi (PERFORM) project to develop a custom system to estimate and track greenhouse gas emissions and use that information to strategically direct climate finance and green growth investments.

Described by Tawonga Mbale-Luka, director of Malawi’s Environmental Affairs Department as “a complete and transparent National GHG Inventory [that] will allow us to understand and project our emissions and trends, and identify sectors for cost-effective emission reduction opportunities,” the GHG-IS includes all economic sectors and adheres to international emissions accounting standards. It also enables Malawi to regularly report emissions to the United Nations Framework Convention on Climate Change (UNFCCC) and support reporting progress toward Nationally Determined Contributions to the Convention. This puts Malawi well in front of most developing nations that seek to lower emissions under the Paris Agreement but do not have the means to reliably estimate them. 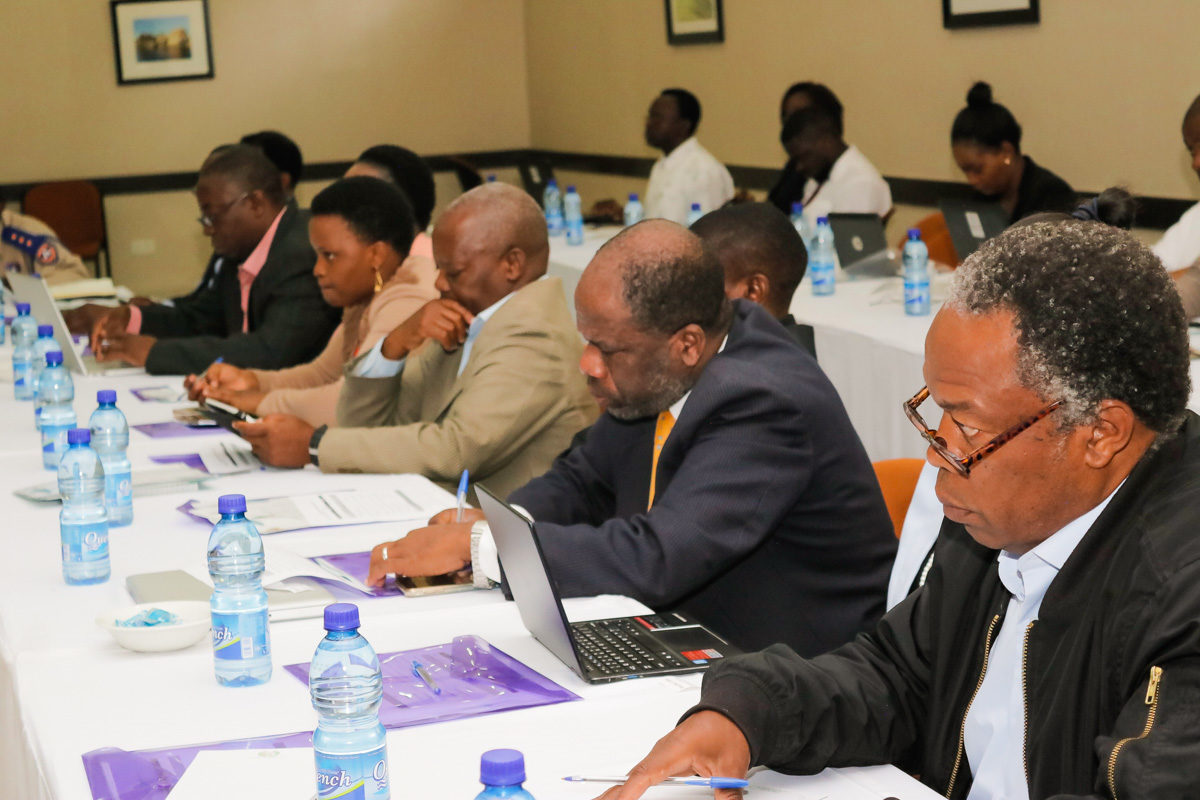 A few months before the GHG-IS launch event, I presented estimates of 2010-2017 emissions generated by the GHG-IS to government officials at a workshop on the shores of Lake Malawi. Their understanding and commitment to using that information was inspiring. For example, they found the rising emissions from the waste management (faster than those from any other sector) alarming. This is a result of Malawi’s waste management systems not keeping up with the steadily growing population. “Waste emissions might be low for now,” said Evans Njewa, chief climate finance negotiator for LDCs, “but we need to acknowledge this increasing trend and take action; we know that otherwise these GHG emissions from waste are only going to go up.”

Findings like these pose challenges but also offer an opportunity for decision-makers in Malawi to take action. Transparency and traceability in the GHG accounting process are key for understanding where to direct investment and attention. “We need to know what our main sources of GHG are and which GHGs we are emitting the most,” stressed Ben Yassin, deputy director of the Environmental Affairs Department. 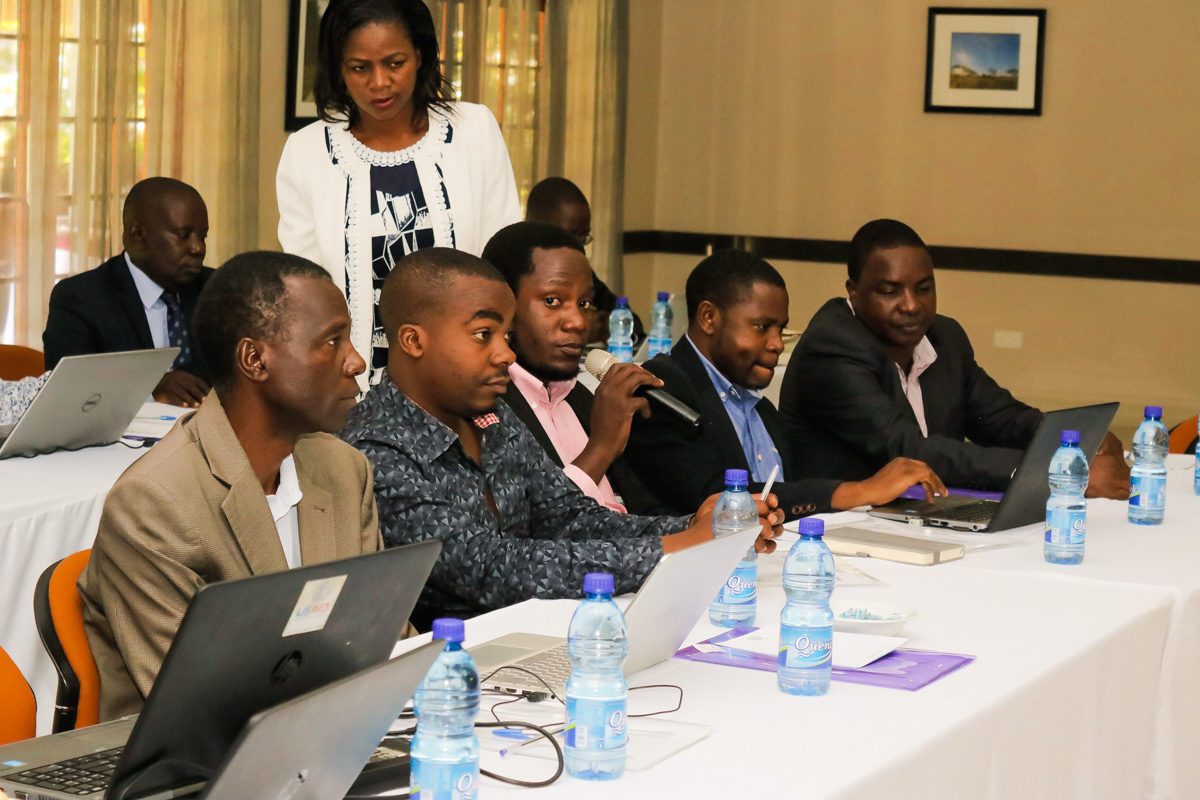 Recognizing that only through a collective effort across all sectors will reliable and comprehensive annual GHG estimates be produced, government officials have consistently expressed interest in engaging actors from across Malawi’s economic spectrum. The GHG-IS launch event gathered government officials, academics, and representatives from international organizations operating in the country, all of whom will help. By committing to account annually for national GHG emissions across sectors, Malawi’s Environmental Affairs Department is taking the critical steps to recognize the red flags hoisted by their annual GHG emissions earlier than many other more developed nations. Malawi is taking this opportunity to set a powerful example of how integrating GHG accounting into policy and decision-making can be done. And Winrock is excited to be part of this journey.

The quest to commercialize solar chillers in Africa. A story with sound effects. 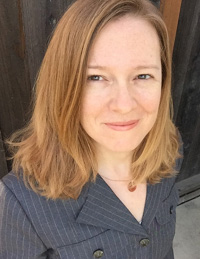 This year the Clean Energy team is implementing a new project called GreenTech, where we are working with U.S. refrigeration company SunDanzer to commercialize solar chillers for smallholders in five African countries. In Mozambique, where the electrical grid covers only 28 percent of the population, our mandate is to determine whether there is a feasible business model for small fish traders to increase their incomes by purchasing and using a solar fish chiller or solar ice maker.

In early March I traveled to Mozambique with Bikash Pandey, Winrock’s Director of Clean Energy. In Maputo, the capital, we met with the national Institute of Fisheries and learned that the government has been working with donors to try to improve the artisanal fishing value chain. One strategy has been to build grid-connected or solar-powered chilling facilities in poor fishing communities and hand them over to the community to operate. We visited the newly constructed fish market in Maputo and noted that, while the government’s efforts have been successful in getting fish traders to move their sales from the beach into the fish market stalls, fish is still sold with insufficient refrigeration. Most fish was not on ice.

Since the cold chain for fish is weak, donors and the government are trying to educate consumers about how to recognize fresh fish. A poster on the market wall shows two fish battling for customers. The fish on the left says, “Buy me – I’m fresh, my gills are red” while the fish on the right says, “Buy me…I need money! I’m spoiled, with dark gills, and dirty with flies. If you buy me, you could get sick.” 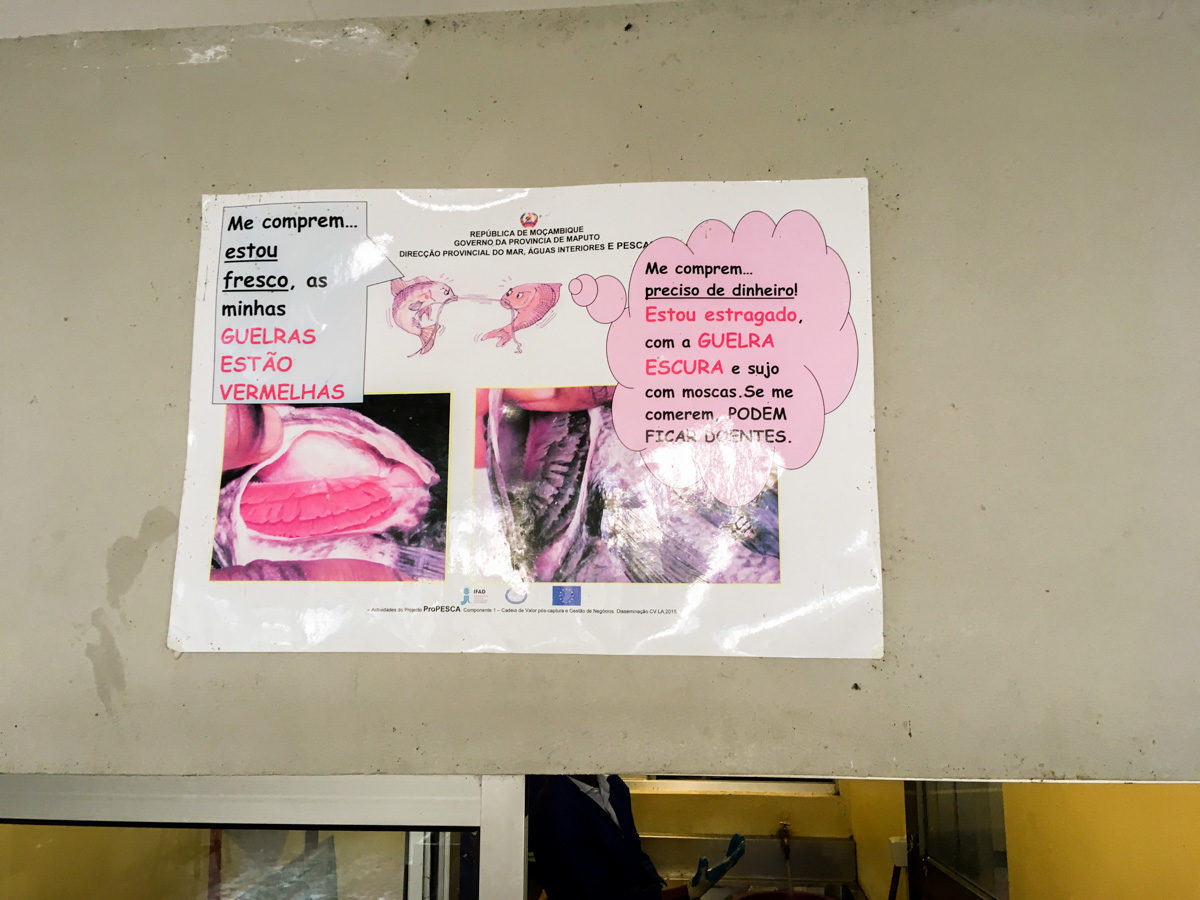 We flew to Pemba, a small city in northern Mozambique, and traveled four hours on a fishing boat to two islands with strong fishing communities. On Ibo Island, which has grid electricity, we interviewed several fish traders who told us that they use home freezers to chill fish and make ice. In both Pemba and Maputo we observed that fish traders use ice in the form of pedras, or four-kilogram blocks made in plastic containers. While fish traders are using some ice, it’s unlikely they are using the recommended one kilo of ice to one kilo of fish at all times, from the purchase of the fish through transport and sale to customers.

On Quirimba Island, which has no electricity, we interviewed fishermen who told us they do not use ice, and 50 to 66 percent of their daily catch has to go to dried fish buyers because they cannot sell it fresh. 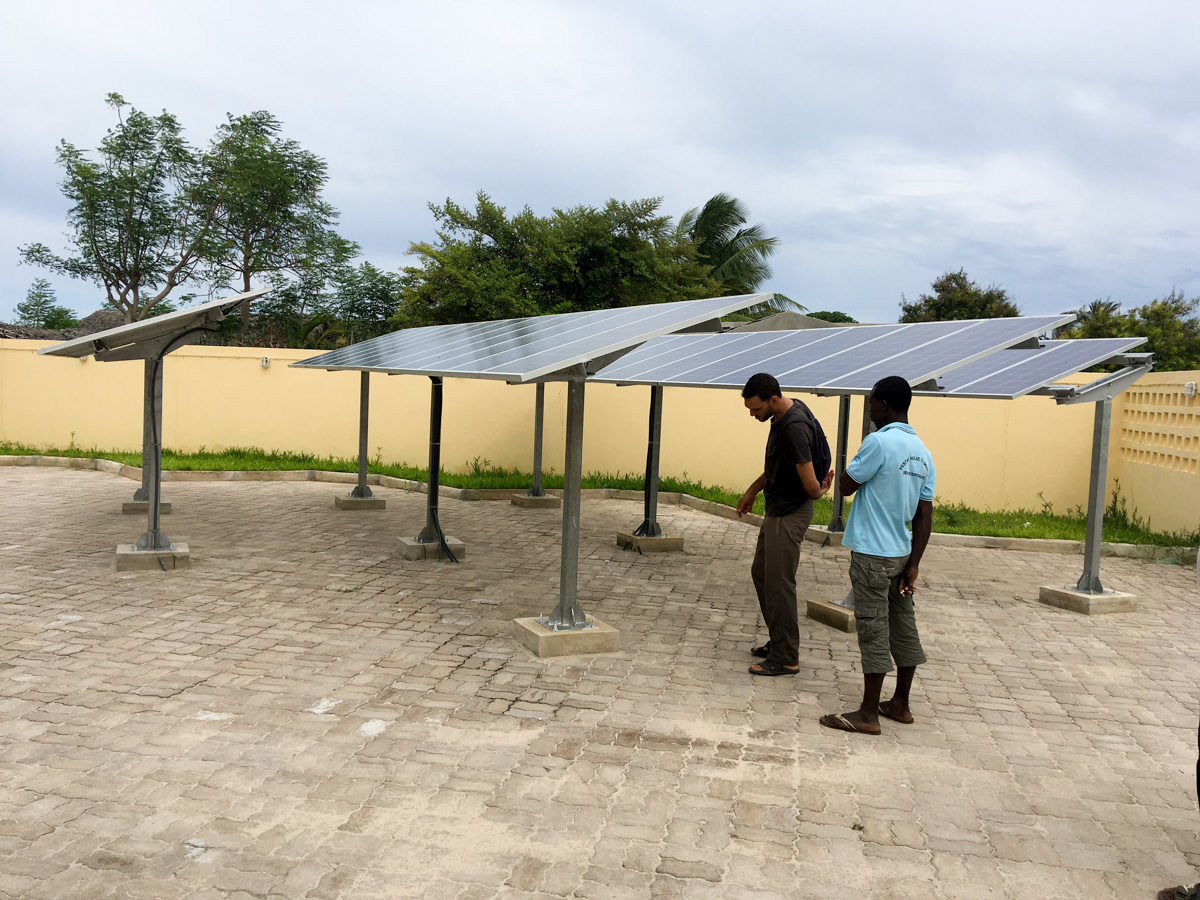 We visited the newly constructed fish market, which has four 500-liter chest freezers powered by 36 150-watt solar panels. Community members were indeed using three of their four chest freezers to store fish — but the fourth was used for cold drinks, cold water and a few pedras. In this case, the government effort has not succeeded at getting fishermen to sell fish from the market instead of the beach.

From this installation it was clear that people have identified solar as a solution for chilling and ice making. But systems at this scale (more than US $65,000) are too expensive for investment by communities or individuals, and will not likely pay for themselves in a reasonable number of years. We will instead be working to commercialize a single, smaller chest freezer with one or two solar panels that could be affordable to individual fish traders. 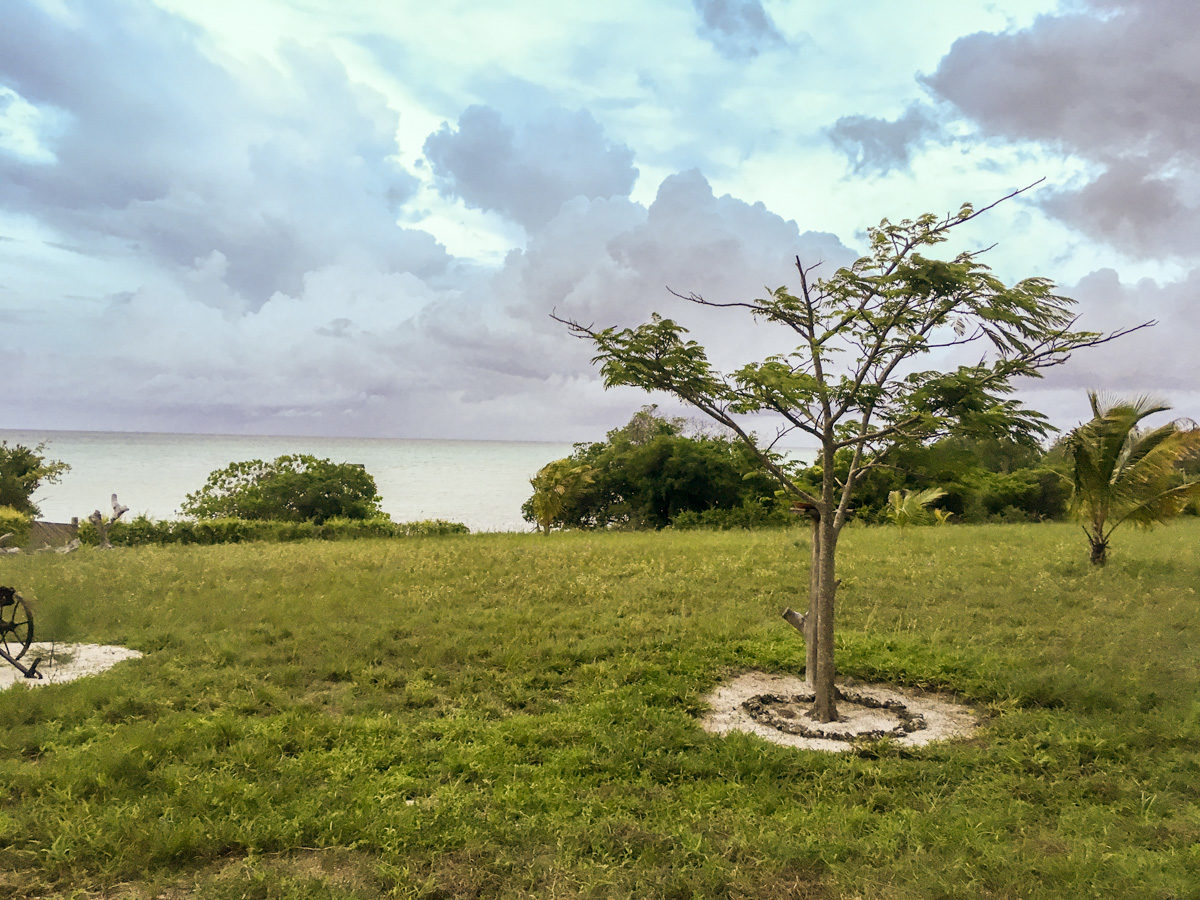 The Indian Ocean from Quirimba Island.

Mozambique is a beautiful place, and we were grateful for the kindness of many people who made time to talk with us. My favorite part of the trip was spending the night in a guest house on Quirimba Island. We went for an evening swim in the Indian Ocean, and then I lay in bed listening to the total silence — no electrical hum in the background. At 2:30 a.m. I was awakened by a storm; it sounded like someone was throwing huge bunches of grapes onto the metal roof. Waves of rain passed over, then the storm died away within seconds. I heard the peep of a gecko on the wall in my room, and the clickety-clackety of bats moving around inside the roof. Fortunately, I made an audio recording; you can enjoy the sounds too. I recommend listening with your eyes closed.