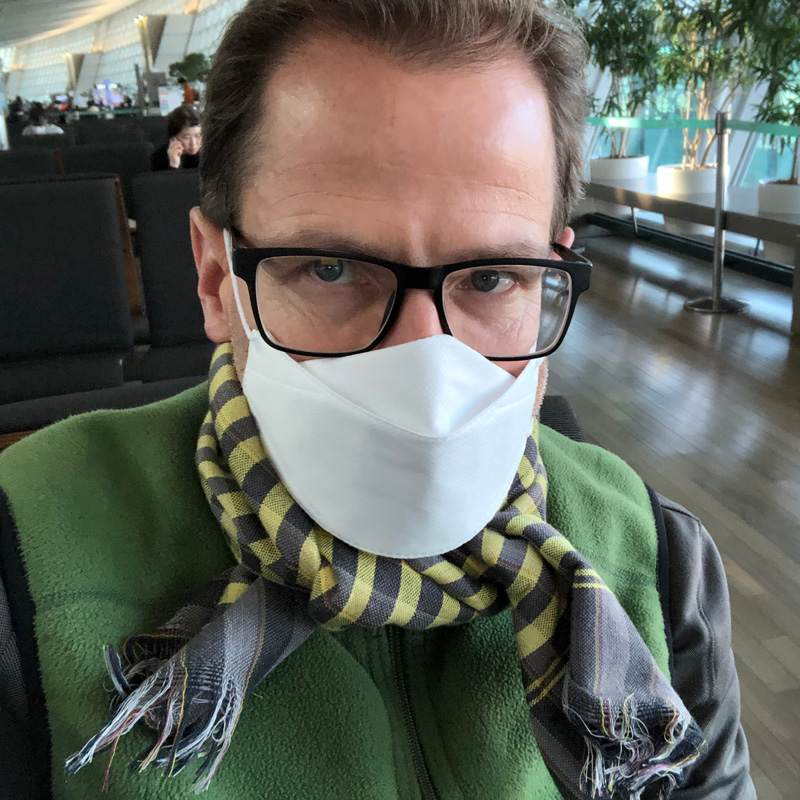 In the weeks leading up to my trip last month to work onsite with the USDA-funded Creating Linkages for Expanded Agricultural Network (CLEAN) in Laos, the pandemic that has now interrupted daily life in many parts of the world had not yet reached its current proportions.

It was my first scheduled trip to support a field team in my new role as senior content manager at Winrock, and I didn’t want to cancel. I’d braved dengue, malaria, yellow fever and sleeping sickness while living in Africa and had avoided chikungunya, typhoid, hepatitis and other maladies during a half-decade in Asia. As an old friend from Myanmar wrote before I departed: “Do not worrying about the virus because you had lived in Myanmar for too long, so your immune system has been upgraded to overcome all the viruses.”

Of course, he was only kidding. On the morning of my scheduled flight from Little Rock, I got a call from Global Safety and Security Director Tobias Friedl, informing me that all non-essential Winrock travel was postponed. Since I was already scheduled to depart that day, I could still opt to travel, but must reroute return flights to avoid Korea and China.

I decided to go. I arrived in Seoul at 4 a.m. on February 25, enjoying extra leg and arm room on my flights due to empty seats next to me. At Incheon, I experienced the impact of the virus, with the airport less than 25 percent full, and 95 percent of people wearing masks. I deplaned through a gauntlet of infrared temperature scanners manned by Korean medical personnel wearing masks, gowns and caps. I felt conspicuous without my own personal protective equipment and paid $12 for two paper masks at an airport pharmacy.

As I boarded for Vientiane, the attendant motioned me to pull my mask up, and I later realized I was wearing it upside down. I landed in Laos and arrived at a nearly empty hotel. 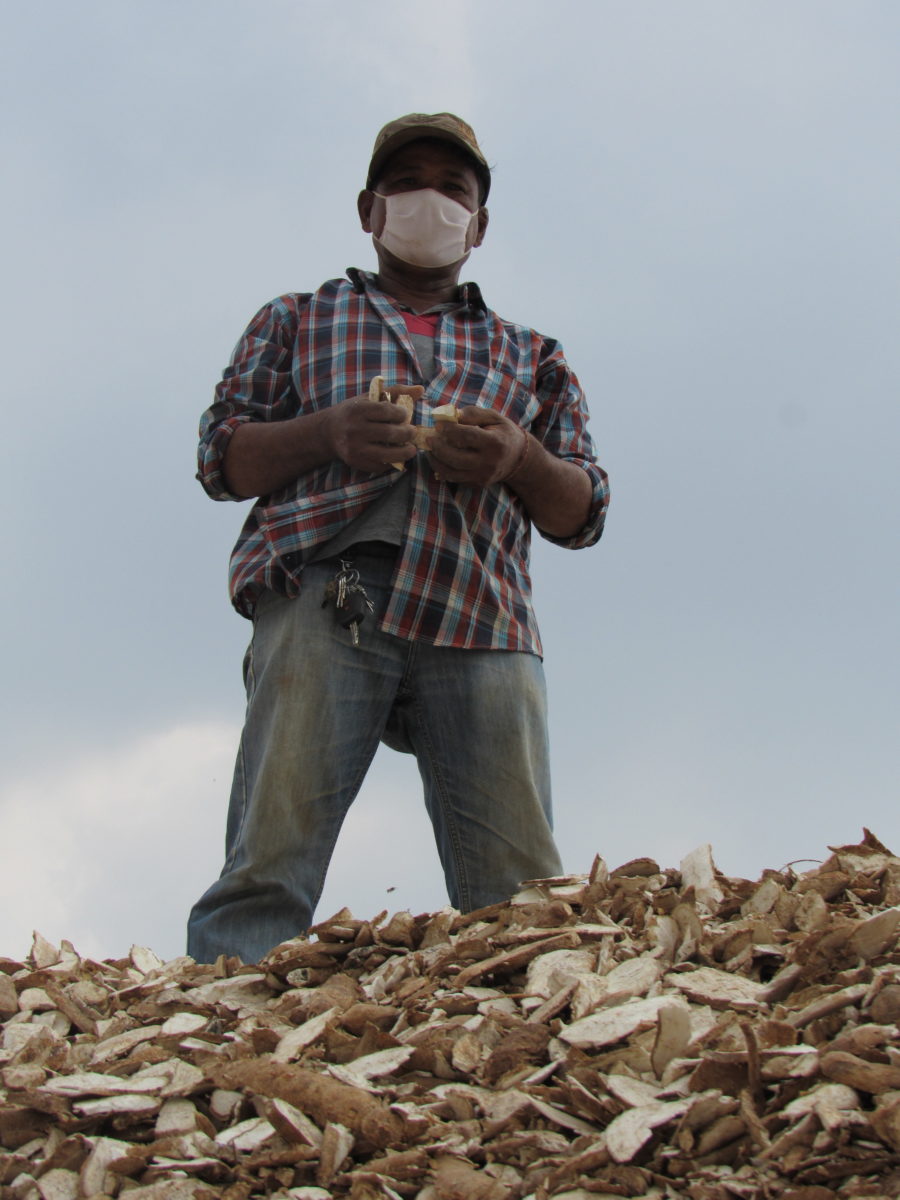 Mr. Boonchuy is manager of a dried-sliced cassava aggregation point in Champasak Province in southwestern Laos. Representatives from a grain storage company were able to reach the Lao Cassava Association through a WhatsApp network that connects some cassava farmers to processors, buyers and suppliers. Photo: Timothy D. May

At that point in late February, the CLEAN team, led by Chief of Party Alex Dahan, was aware the virus could soon alter their work plans. Staff were under guidance to keep away if they felt sick, office spaces were cleaned carefully, and hand sanitizer abounded. But with no cases yet reported in Laos, activities continued as scheduled.

I was lucky to attend one of the project’s major events, Good Agricultural Practices (GAP) Inspectors’ training with provincial and district Agriculture and Forestry Departments staff, led by the government’s Clean Agriculture Standards Centre, held in the usually booming adventure town of Vang Vieng. A haven for climbers, spelunkers and tubers on the Nam Song River, the picturesque town was sadly empty. Our hotel had few occupants other than CLEAN and government staff assembled for the training. 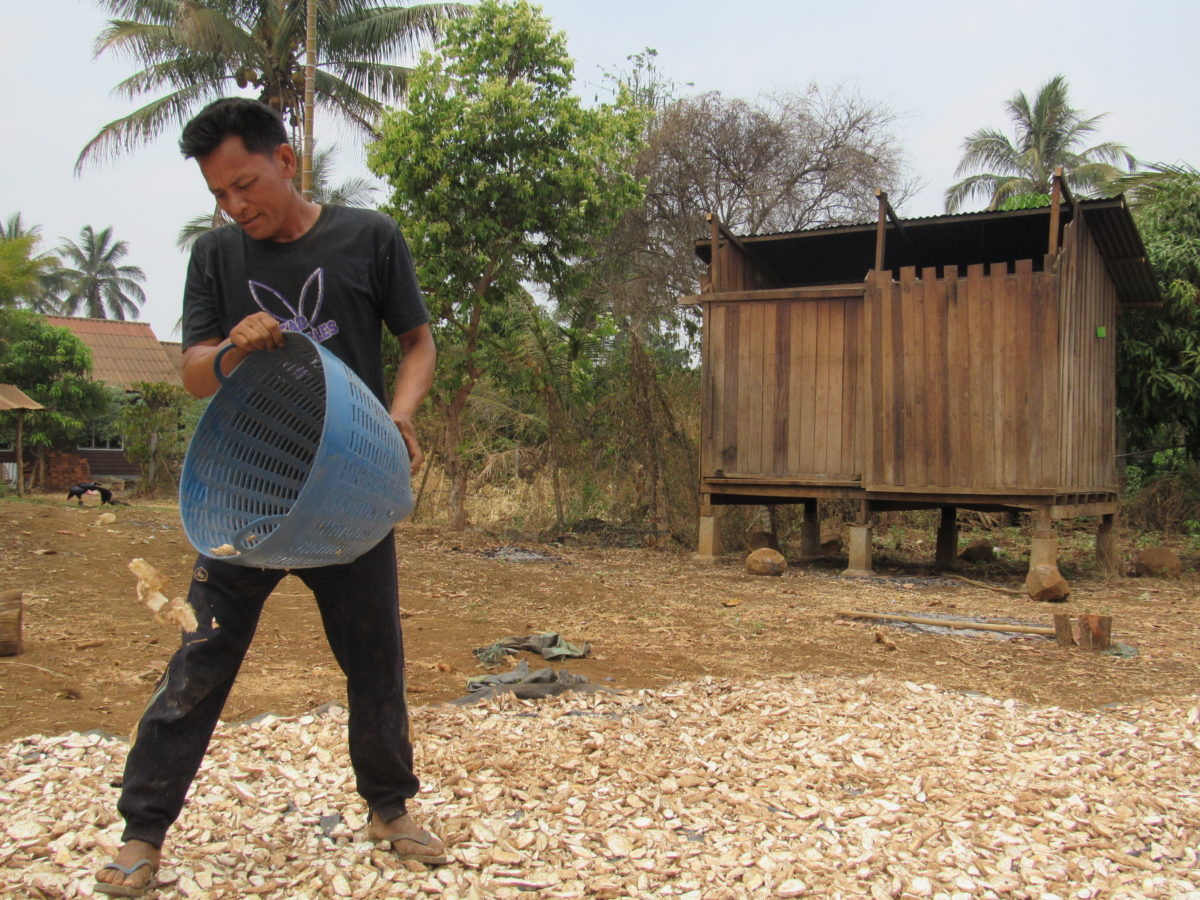 Mr. Seng sells his dried-sliced cassava to Thai or Vietnamese buyers who export it. He is interested in learning about GAP strategies to increase yields and protect his soil. Photo: Timothy D. May

Alex Dahan and Phiengphaneth Chanthalansy, the project’s communications manager (who goes by “Pik”), and I monitored the news as the virus escalated in Korea, Italy and Iran, and began to spread through communities in the U.S., eventually reaching even Little Rock. On March 12, when President Trump restricted travel from Europe, I decided it was time to return to the U.S. I was  booked on the first available flight to Singapore, then through San Francisco and Denver back to Little Rock.

Since my return, the first few coronavirus cases in Laos have been reported, but CLEAN colleagues in Laos are adjusting well to changed work conditions. And I’m appreciating the gift I received from Pik right before I left the country — a packet of masks, in case I couldn’t find any in the U.S.