Professor Maung Maung Htwe returned to his native country to make a difference. Burma has never been the same. 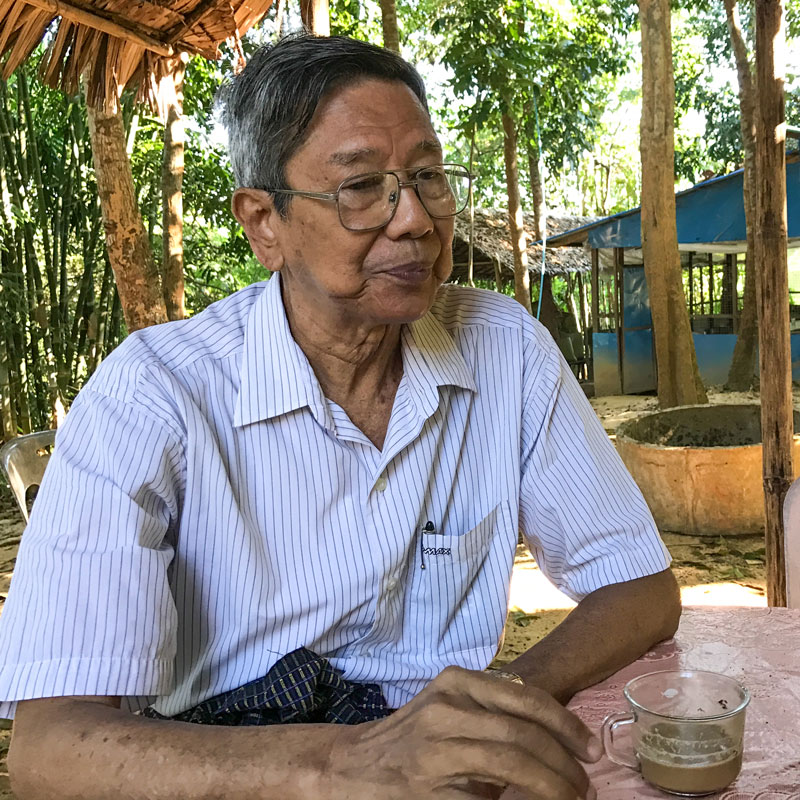 Professor Htwe on the farm at Nyaung Tagar, just north of Yangon, Burma.

This is the story of a dream deferred, of a risk taken and a hope fulfilled. Above all, it’s the story of persistence. When Professor Maung Maung Htwe, 78, was in his 20s, he dreamed of helping the rural poor in his native Burma. Farmers were growing a lot of rice then, and Htwe thought they would be better off if they grew more fruits and vegetables. But Htwe needed to study first, so in 1962 he left Burma to earn an agriculture degree in the Philippines.

Htwe had “escaped” — exiting just before Burma’s military junta closed off the nation to the rest of the world — but he didn’t see it that way. He wanted to go back and help his people. After earning a bachelor of science in agriculture at Central Philippines University, he got a master’s degree in horticulture from the University of the Philippines Los Banos in 1967, a graduate degree made possible by the Agricultural Development Council (A/D/C), one of Winrock’s three predecessor organizations.

A/D/C fellows were educated abroad with the understanding that they would return to their home countries and share the knowledge with others. But in 1967, few scholars were entering or leaving Burma. Htwe’s parents thought he should not return, that he would have more opportunities elsewhere. But Htwe was determined to go back. “Horticulture is very important for our health as well as for income generation,” he says. Besides, he had a job; he was going to manage a demonstration farm to teach farmers about modern agricultural methods. 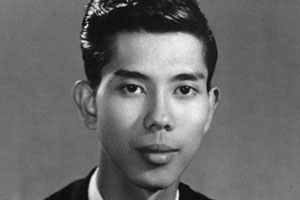 Professor Htwe earned a master’s degree in horticulture in 1967, a graduate degree made possible by the Agricultural Development Council (A/D/C), one of Winrock’s three predecessor organizations.

Before he could begin, though, the Burmese government nationalized the farm. It might have softened the resolve of most people, but Htwe quickly found another way to spread his ideas. “I joined the agricultural university, where I could train more people.” Htwe’s teaching position became an enormously influential one that lasted three decades. “We have only one agriculture university in the whole of Myanmar, so all the government staff from Myanmar agriculture service before my retirement in 1998 are my former students, including the deputy minister of agriculture,” Htwe says.

The professor had not forgotten his dream, though, and when Burma’s government began to loosen restrictions a decade ago, Htwe picked up where he left off. By then retired from the university, he worked with the Myanmar Baptist Convention and Christian Social Services and Development Department (CSSDD) to acquire 18 acres of land at Nyaung Tagar, just north of Yangon, and set up a demonstration farm where farmers could learn about everything from vegetable growing to cropping patterns that help mitigate climate change. 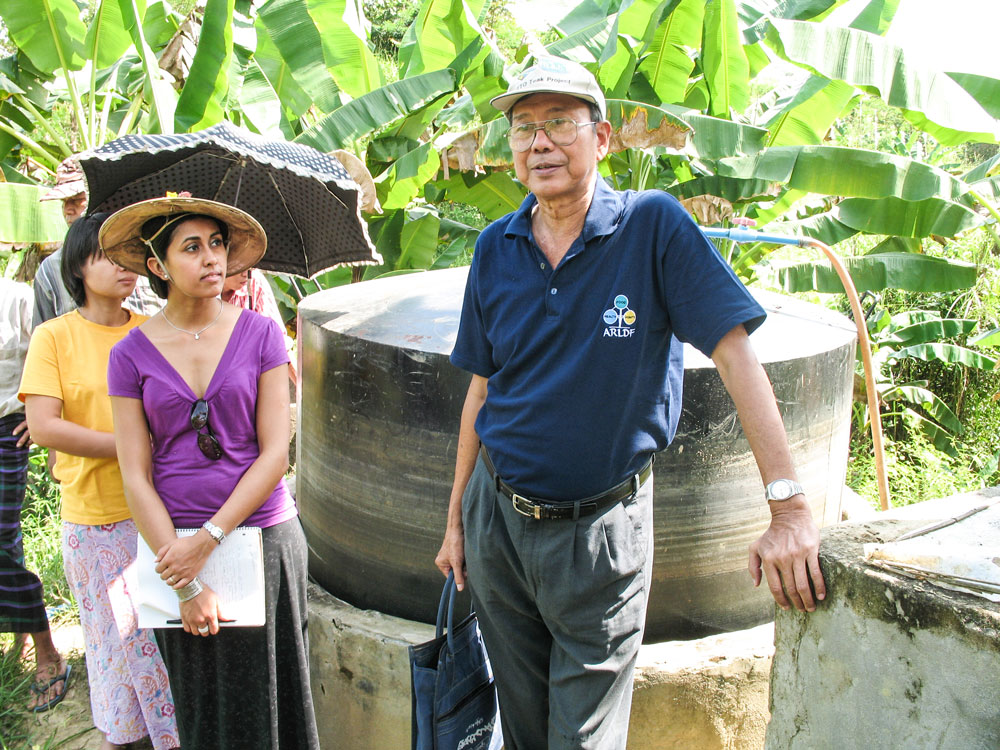 Professor Htwe poses in front of a biogas digester at Nyaung Tagar in 2007. With him are Augusta Na Fa of the Myanmar Baptist Council and Winrock’s Asmita Savani.

The place was mostly denuded farmland when Htwe started, property tucked next to a small monastery with one of those distinctive golden pagodas Burma is known for. Working with CSSDD, Htwe planted hardwoods that can be sold later for profit. He set up a fish pond and a pigsty (with a biogas facility at one point), a demo plot for growing a new variety of rice that allows farmers time to plant a second crop of pulses (a type of legume), plots for vegetables, and an orchard with pomelos, papayas and mangoes.

The fruits and vegetables are key. When Htwe returned from the Philippines in 1967, he was not only Burma’s only known returned ADC fellow, but also one of its few horticulturalists.

“When you grow tomatoes, you get several times more than rice-growing,” Htwe says. “But formally our government wanted only rice, so that’s why I wanted to specialize in horticulture and improve the health of the people.” 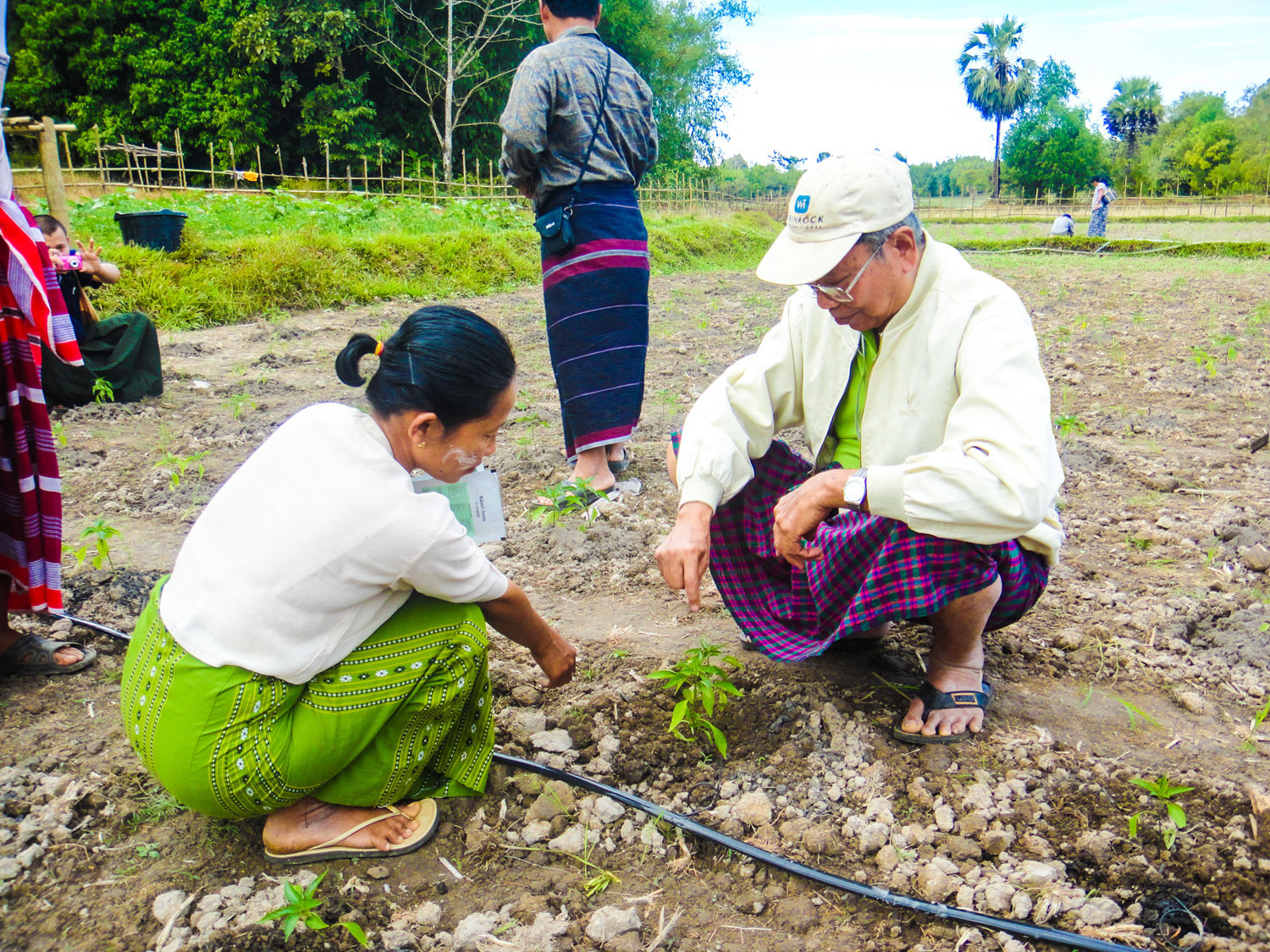 Professor Htwe works with a student on a demo plot project in Kawkareik, Burma.

A few years ago, Htwe got a visit from Jenn Holthaus, then director of Winrock’s JDR3 Scholars Program, which carries on the A/D/C legacy by supporting research on agricultural challenges in Asia. Holthaus was looking for A/D/C fellows, and when she found Htwe, she asked him if there was anything he needed. “I said we wanted to learn aquaponics,” he recalls. And so Winrock, through the USAID Farmer-to-Farmer program, sent experts to train farmers on how to combine aquaculture and hydroponics.

Nyaung  Tagar’s Sustainable Agriculture Training Center now hosts many groups of trainees. Some people come for a few days, others for a few weeks. Students sleep in simple dormitories clustered around a tree-shaded courtyard, and when class is over, they pour a cement driveway or otherwise pitch in to help out. 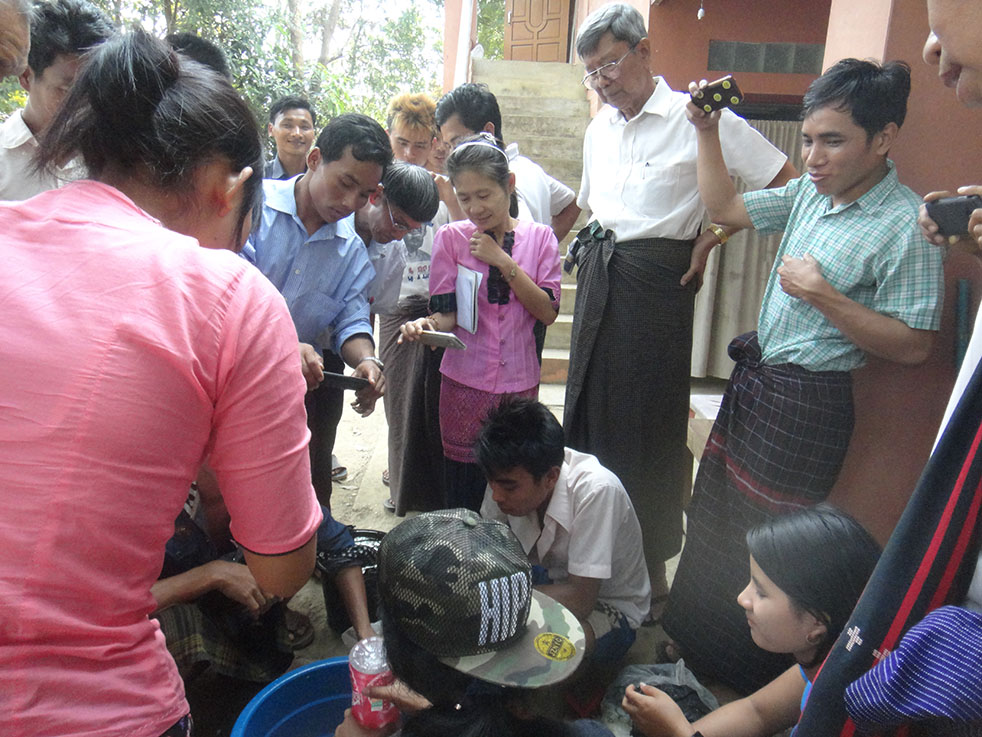 A training session at Nyaung Tagar with Professor Htwe, second from right.

Last November, after showing visitors around the center, Htwe stood in an upstairs classroom lecturing 30 farmer trainees on crops, pests, diseases and soil management. The farmers had all been here before; this was a 10-day review class sponsored by the organization Bread for the World.

Most farmers “believe it only when they see it,” Htwe says, “so we show how to grow crops in a sustainable way. We introduce organic fertilizer and organic or natural insecticides or pesticides so that farmers will reduce the input and get higher income.”

Just a few weeks earlier, Htwe’s colleague, farm director Saw Hei Moo, conducted an animal health workers training at the center, showing livestock farmers how to vaccinate their pigs against swine flu. Working through NGOs, the Burmese government provides low-cost vaccines to those learning this skill. One man who trained at Nyaung Tagar, Khan Tin Thang, was able to vaccinate 100 pigs in one day, which helped contain an outbreak of swine flu.

Htwe’s gospel of horticulture is better received now than it used to be, though the professor says he deserves little credit for this shift of focus. Organizations like the U.N.’s Food and Agriculture Organization and the United Nations Development Programme pushed the need for more  horticuture, he says. But as someone who has educated most of the horticulturists in the nation, he does admit that he’s “proud of it.”

As Htwe sees his long career quite literally bear fruit —  on the farm and throughout the land — he knows that the dream he deferred, the dream he worked so long to bring about, has finally come true. 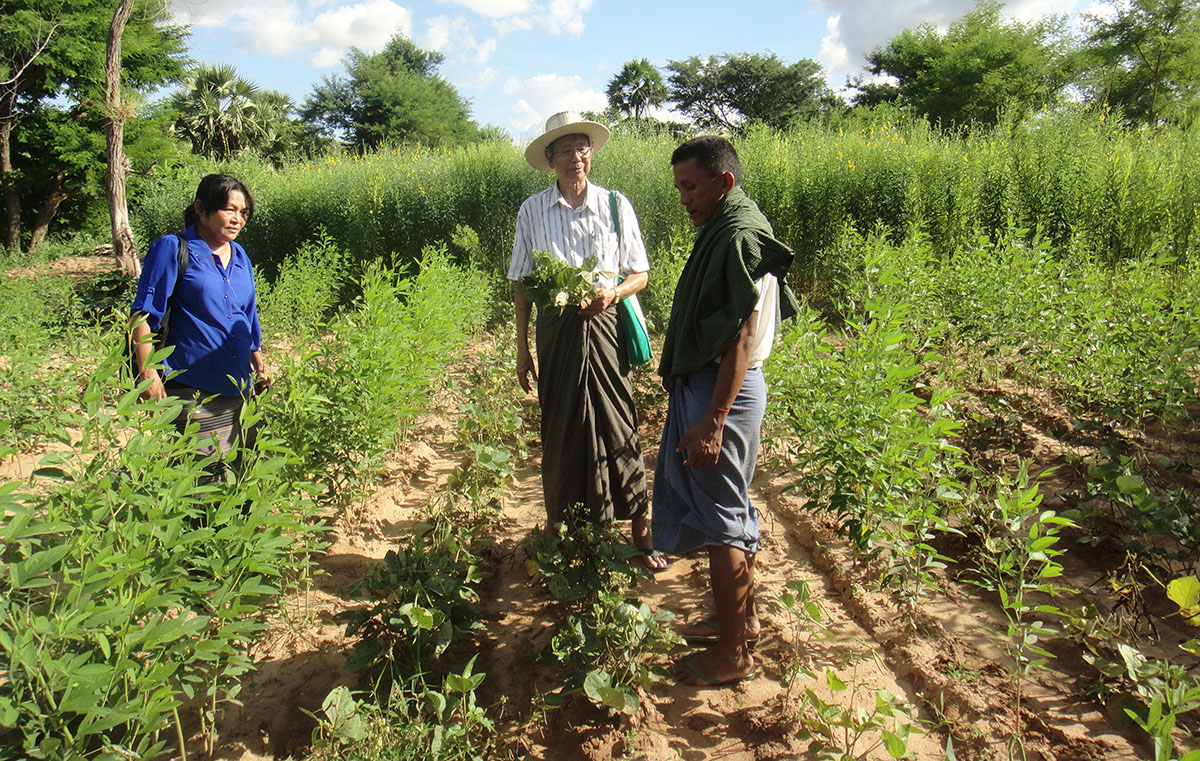 The professor at a review workshop in Pakokku. “Most farmers believe it only when they see it,” he says.