On February 19, Arkansas Governor Asa Hutchinson and Winrock’s Innovate Arkansas took an important step to expand Arkansas’ knowledge-based economy with the launch of the Arkansas Innovation Council. This new initiative will tap into the combined insights and innovation of the state’s established industry leaders and its burgeoning startup community. Comprised of key leaders from Arkansas businesses, research universities, philanthropic organizations and state agencies, the council gathered for the first time to begin mapping the future of innovation in Arkansas.

Today we held the Arkansas Innovation Council’s first meeting. I enjoyed talking with such a diverse and knowledgeable group of leaders who are working hard to figure out new ways to grow business in Arkansas. pic.twitter.com/hc14UtInew

Gov. Hutchinson, who chairs the council, kicked off the summit by thanking members for their commitment and an audience of entrepreneurship influencers for their support. But he wasted no time in setting the stage for results by outlining his vision for the council.

“I was asked very astutely by [Tyson Foods President and CEO] Noel White, ‘What’s the goal? What are we trying to accomplish here?’” Hutchinson began.

While acknowledging past and ongoing efforts that have set the stage for continued innovation, Hutchinson stressed, “My goal is for us to determine what the gaps are for the future and what we can do better as a state. How can we help each other achieve our mutual goals? This council will require a focused and sustained partnership in order to identify gaps and the new ideas, initiatives to help us establish a strategic plan with specific recommendations.”

Arkansas has a well-diversified economy, which makes the state resilient to shocks. Gov. Hutchinson expressed his goal to add technology companies as a new pillar to Arkansas’ economic diversity. 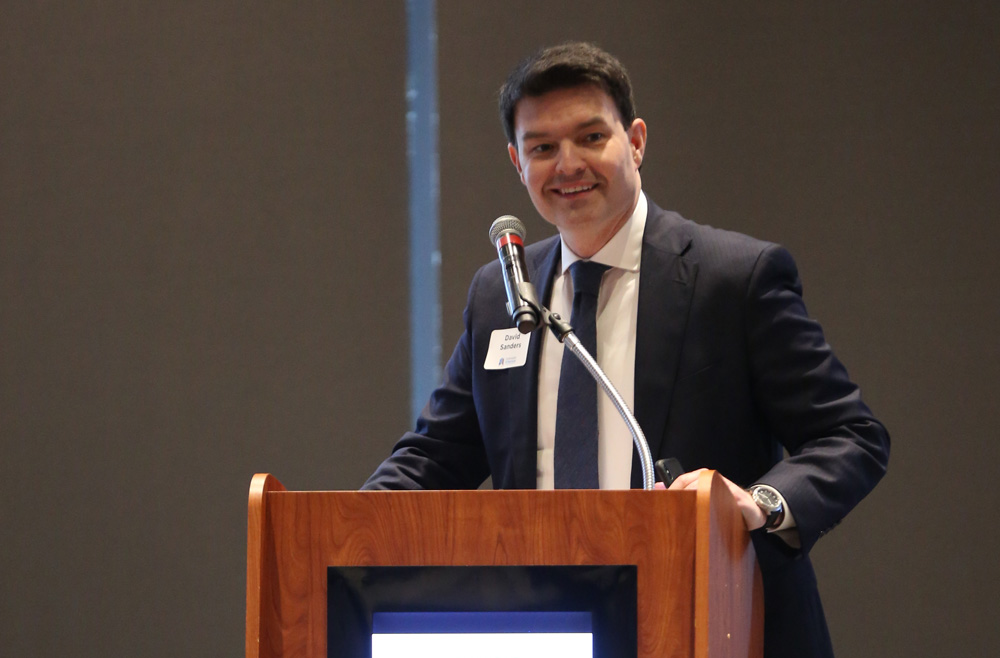 David Sanders, Director of Innovate Arkansas at Winrock International, spoke about Innovation in Arkansas and elaborated on the interrelationship between established industry leaders and Arkansas’ entrepreneurial ecosystem.

The council will focus on innovation in industry sectors in which Arkansas leads nationally and globally, as well as those that are crucial to the lives of its citizens: retail and retail technology; transportation, distribution, and logistics; agriculture, food processing, forestry and natural resources; healthcare and biosciences; financial services; data sciences, advanced analytics and software development; and energy and power electronics. 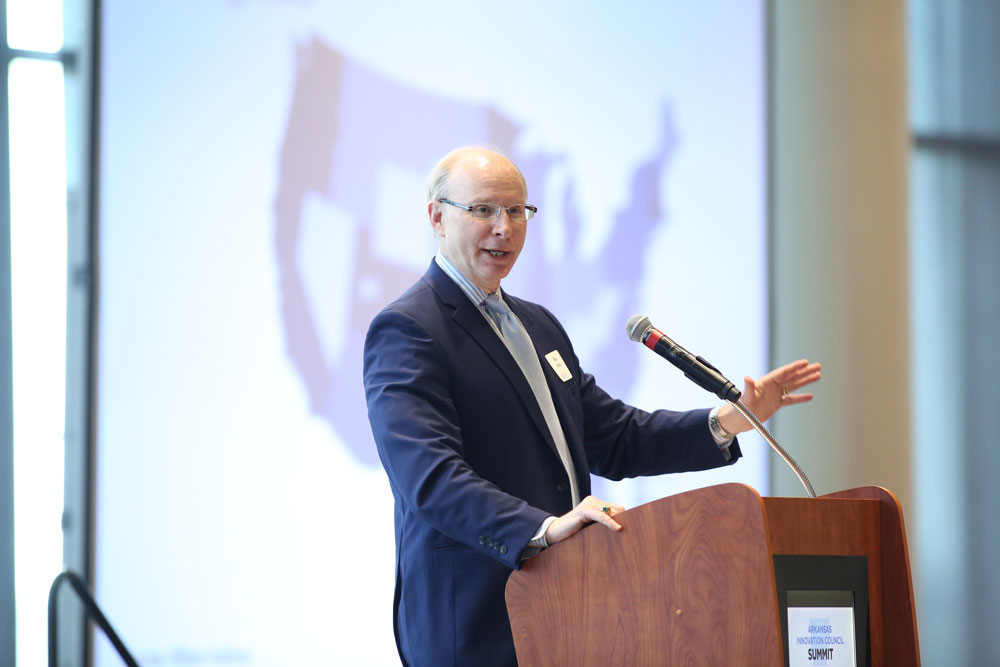 Ross DeVol, a Walton Fellow with the Walton Family Foundation, is a member of the Arkansas Innovation Council.

Council member Ross DeVol, a Walton Fellow with the Walton Family Foundation, shared research and insights on the current status of the knowledge-based economy, including challenges that Arkansas must address as well as unique opportunities for innovation and growth.

We must reach young females, specifically by 4th grade, to make sure they know there are opportunities in #STEM for them – @DevolRoss, Walton Fellow, @WaltonFamilyFdn, at Arkansas Innovation Council Summit. #education #empowergirls @innovateAR https://t.co/DAQ0Yx6YaO pic.twitter.com/ezrBtUh6Qm 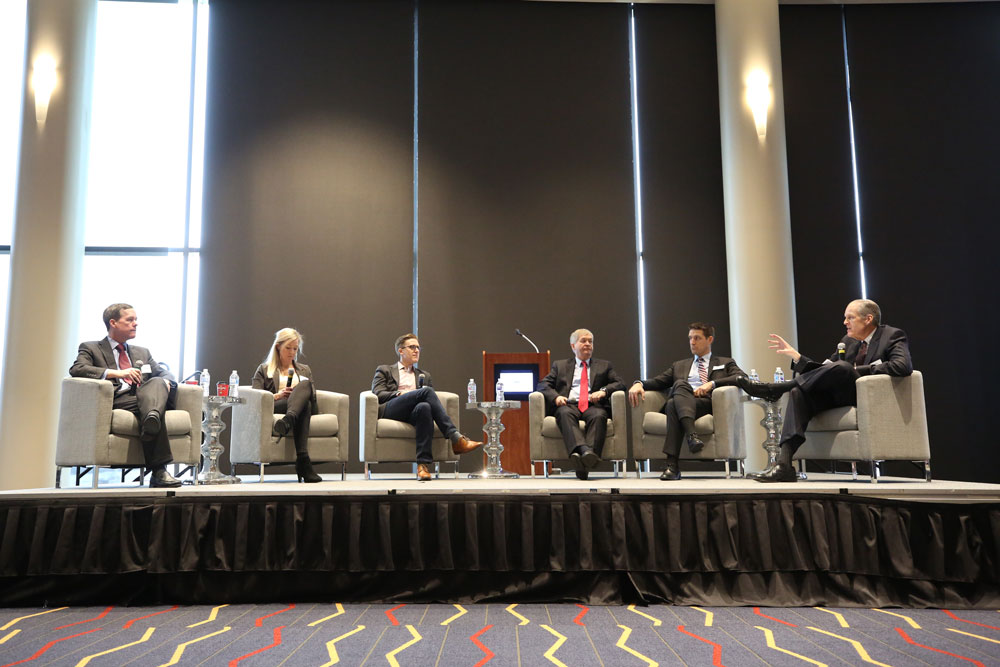 Stan Green, of Winrock’s Innovate Arkansas team, moderated a panel to explore the components of a thriving, knowledge-based economy, featuring:

What was the key to creating Utah’s thriving knowledge-based economy?

“We would not be here today without the support of the State of Arkansas…I may be the biggest advocate for those programs.” April Seggebruch, co founder, Movista. @innovateAR @ArkansasEDC https://t.co/DAQ0Yx6YaO pic.twitter.com/pyWUCXhrpu

“I’m confident I can attract and retain high quality employees in #Arkansas because of the quality of graduates…We have an incredibly good recruiting pipeline that we were able to establish in a matter of months” – Mark Mason, Affirma Consulting. @innovateAR @ArkansasEDC pic.twitter.com/WhrzOHjj8D

Elliott Parker @highalpha on partnerships with corporations + #startups: #Entrepreneurship drives the economy…We live in an era of decentralized R&D. For established corporations to succeed, they must manage broadly distributed assets — not by pulling all R&D in-house. pic.twitter.com/x9RVERAAVB 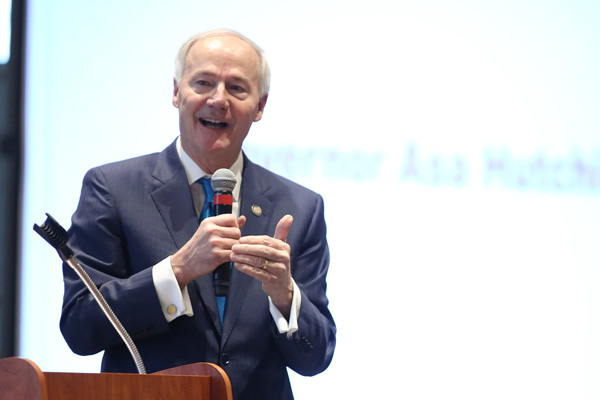 Gov. Hutchinson returned to the stage to deliver the keynote of the Summit, in which he elaborated on the key points of his welcome address: success of past efforts, his vision for the future of Arkansas’ knowledge-based economy and the objectives of the Arkansas Innovation Council.

What are the gaps for the future? What do we need to do better? What are the new ideas and initiatives that will help us establish a strategic plan with specific recommendations as to what more we can do as a state – Gov. @AsaHutchinson. https://t.co/DAQ0Yx6YaO pic.twitter.com/7VDtGZ2SuH

The founding members of the Arkansas Innovation Council are: