Vietnam’s Payment for Forest Environmental Services (PFES) system, implemented by Winrock’s USAID Vietnam Forests and Deltas project, provides around $130 million a year to over 500,000 households for their work protecting the forest. It’s money that flows from hydroelectric plant owners and other downstream users of environmental services into the hands of people like K Lũy, Cil Yu Ha Giảng, K’Dắt, Kap Brès, Kon Sơ Ha Vương and others. Here are their stories.

K Lũy literally wears her reverence for the natural world on her skin. A member of the K’Ho tribe, a once-nomadic ethnic minority group in Vietnam’s Central Highlands, Lũy’s traditional, hand-woven dress is adorned with patterns and symbols representing birds, mountains and trees. The importance of the natural world to the culture and livelihood of the K’Ho is something Lũy learned early. “When I was small, every time I went with my parents to the field, my parents would show me several kinds of tree and told me to take care of them so that they could grow up, just like me,” she remembers. Today, Lũy imparts the same message to her nine-year-old daughter and six-year-old son. But the tangible importance of healthy forests is more apparent than it ever has been to Lũy and her family. That’s because Lũy and many of her fellow K’Ho earn a significant portion of their income by patrolling the forests near the village of Kalatangu. The money makes a big difference in Lũy’s daily life, but also in laying a foundation for her children’s future. “Since we mostly do farming and we only earn a living from coffee and rice, an additional source of income from the forest for the remaining months is really necessary,” she says. “It helps us with household spending, schooling for children, and daily food.” As critical as the income from PFES is on a personal level, Lũy’s conviction about the importance of forests transcends her own circumstances. When asked if she has a message for those living far from the hills of Lam Dong Province, Lũy’s response is simple. “Let us join hands to protect our forest,” she says. “If we have forests, we will have a green, clean and beautiful earth, as well as healthy air.” 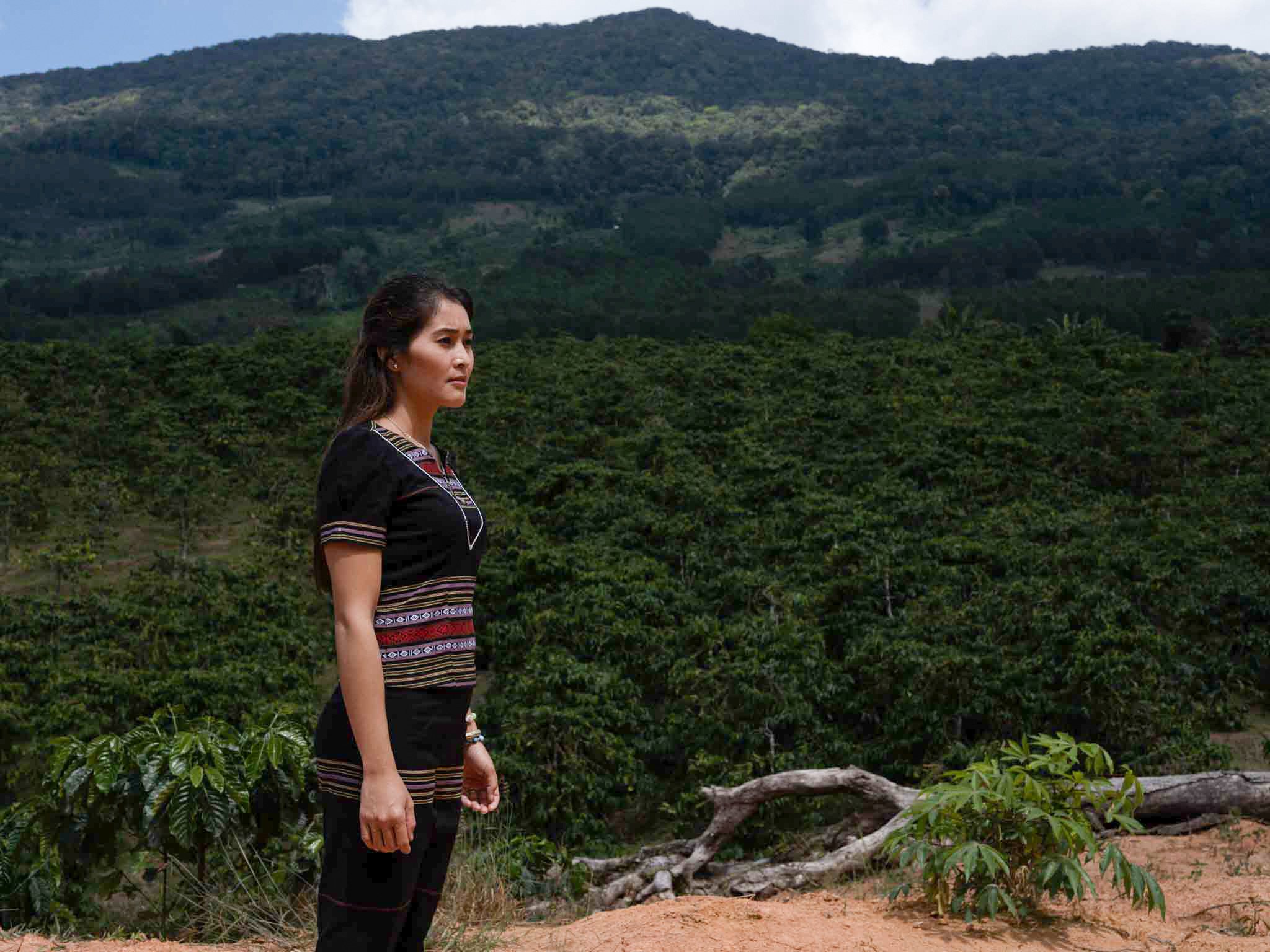 Ho Chi Minh’s famous observation that “forests are gold” clearly made a big impression on Cil Yu Ha Giảng. “For us, forests are precious, and they are precious to the state as well,” he says. “Forests are gold and we manage them very closely.” Giảng leads the efforts of the 36 households in Liêng Bông Village that have been tasked with patrolling and protecting a little over 850 acres of forest. By ensuring that no illegal logging or farming takes place, Giảng receives around 3.8 million Vietnamese Dong (about $164 dollars) every three months. Giảng has eight children and six grandchildren, and the money he receives for patrolling the forest is a critical supplement to his farming income. The money covers living expenses as well as something that is very important to Giảng. “The income helps with children’s schooling, which is our top priority,” he says. 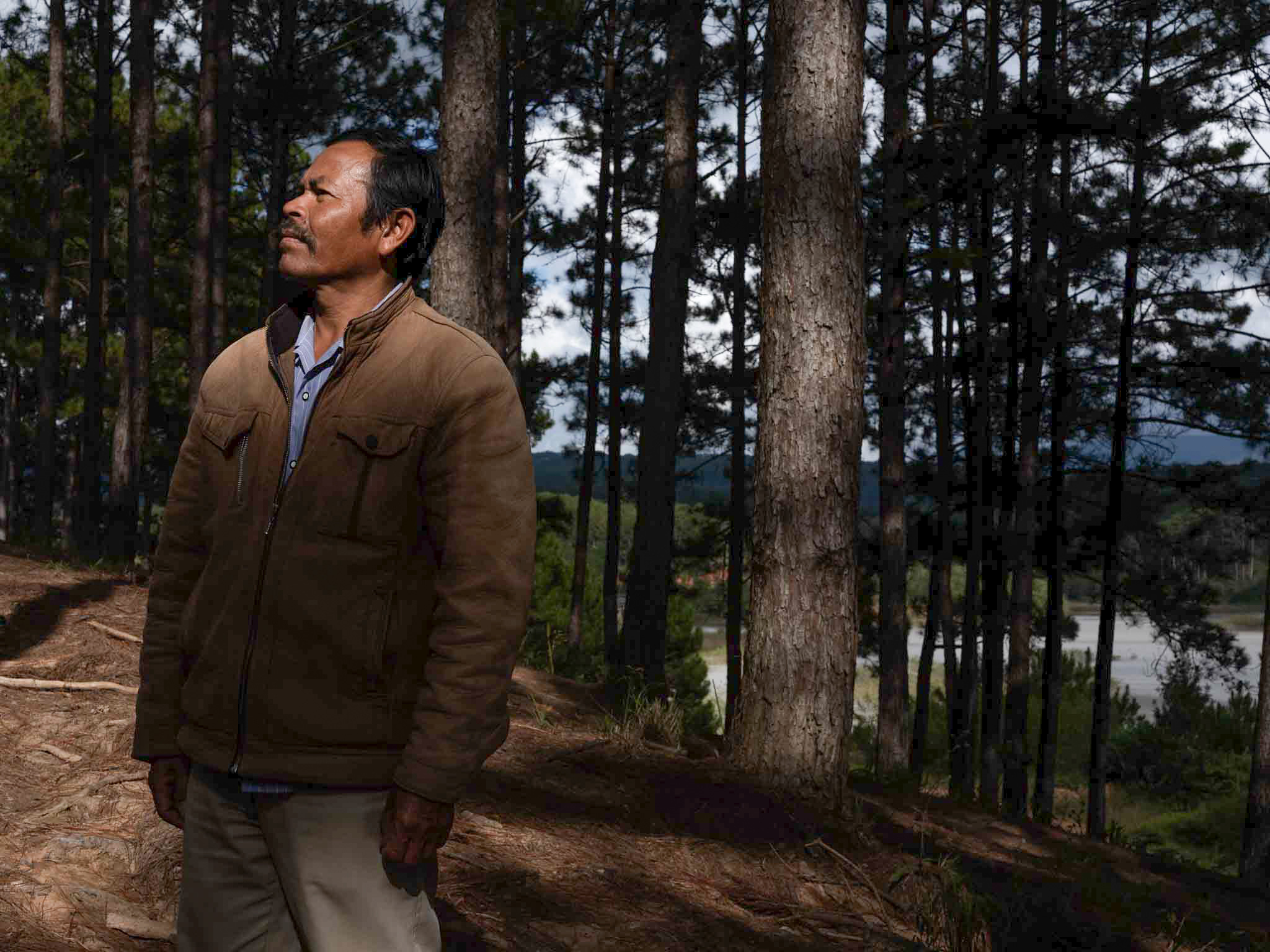 K’Dắt is something of a veteran when it comes to patrolling and protecting the forest near the Tà Lài Commune where he lives. K’Dắt (pictured below, far right) joined the patrols to protect against illegal logging and poaching in 2014. But a big part of K’Dắt’s work takes place outside the cover of trees, in conversations with his fellow community members. “We try to convince people that forest resources are running out and we should not chop down trees or trap birds and animals,” he says. “At first people challenged us, but over time they managed to understand, since local people rely on the forest for their livelihood. Given the decreasing resources, people now understand.” As one of the leaders of his community’s patrols, K’Dắt receives 10 million Vietnamese Dong (about $430 dollars). It’s money that helps him send his 14-year-old daughter and young son to school while also helping cover other daily living expenses. While K’Dắt has spent much of his time convincing neighbors that forest protection is important, his message is universal. “I share the common global awareness forests are very useful to us,” he says. “They help absorb carbon, combat floods, storms and drought.” 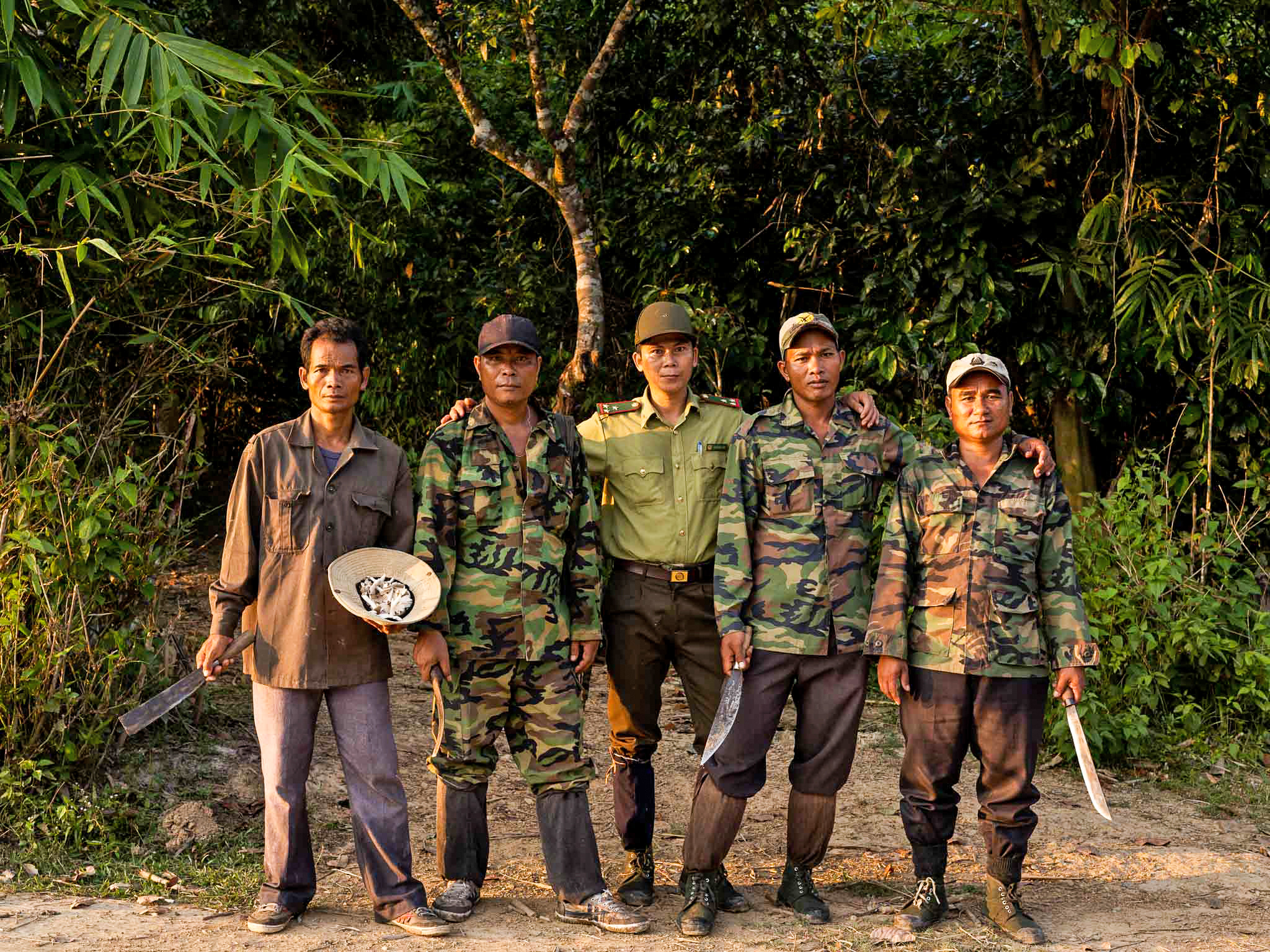 The K’Ho people didn’t need concerns about climate change and dwindling biodiversity to focus their attention on forest conservation. Kap Brès, an elder in the 225-household village of Kalatangu, points to icons on his traditional, vest-like garment — images representing forest, animals and people — to emphasize the K’Ho’s long-time understanding of the symbiotic relationship between man and nature. Brès is a member of one of his community’s five forest management teams, which earns him income to help support his wife and two children. “I use that income to buy fertilizer for coffee and raise chickens to improve my family’s living standards,” he says. But even if he wasn’t getting paid to patrol and protect the forest, Brès is certain his people would continue their long tradition of preserving it. “Since we worship the forest, nobody would dare destroy it,” he says. 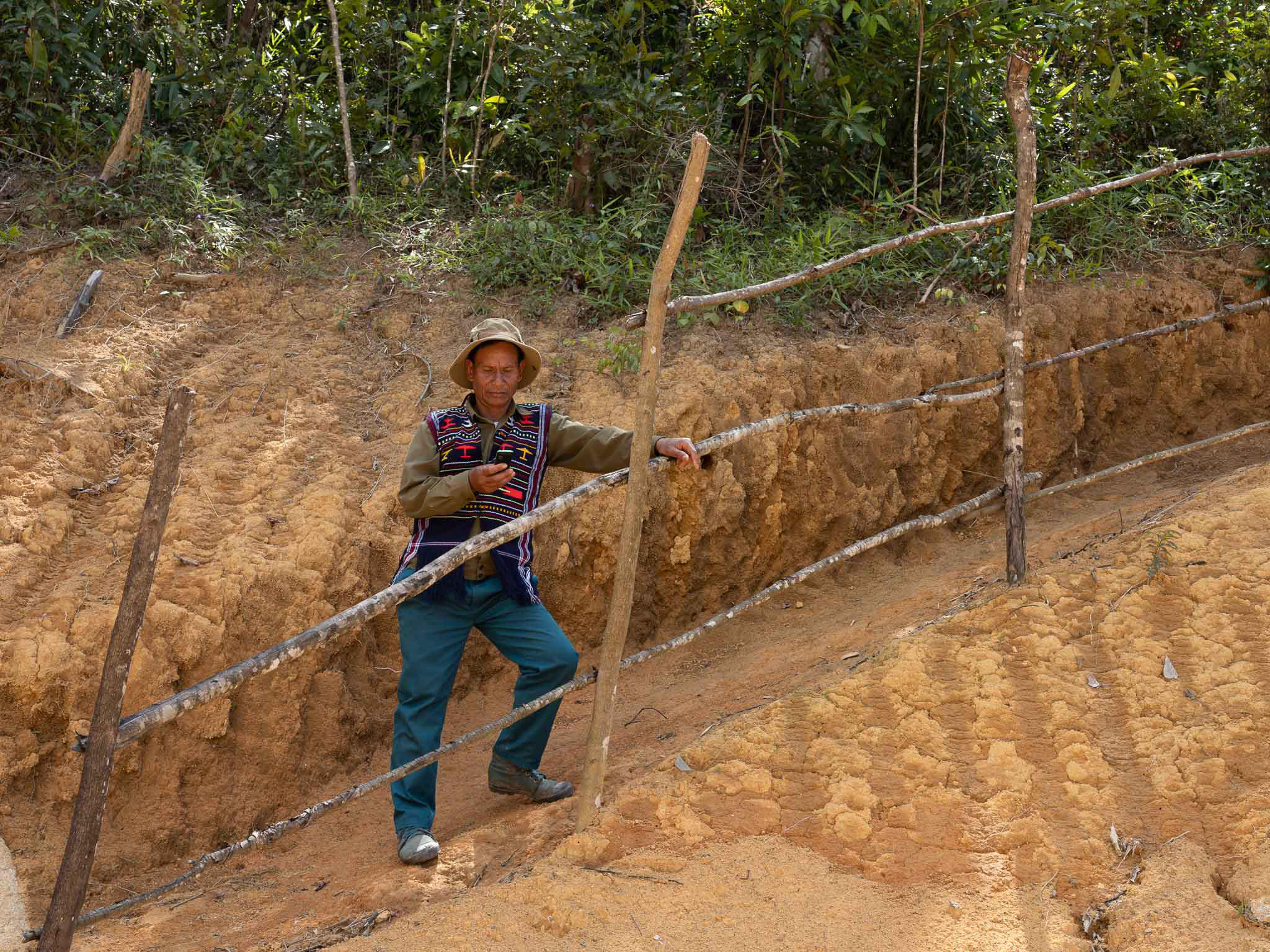 Kon Sơ Ha Vương has seen for himself what a big difference PFES has made in the lives of those who call Da Nhim Commune home. Since PFES began paying those who keep watch over the forest in this section of Lam Dong Province, local poverty rates have plummeted. “The ratio of poor and nearly poor households has dropped from 30 to 35 percent to 2 percent,” says Vương, who is chairperson of the Da Nhim Commune People’s Committee. “The management and protection of forests is sufficient to lift most households out of poverty.” The income source has also altered how the 500 people who live in Da Nhim view and interact with the forest. No longer is it common for locals to cultivate coffee, vegetables and flowers or gather orchids in the forest to make money. “After the adoption of PFES, local people have refrained from exploiting resources from the forest,” he says. When forest patrols aren’t guarding against those who would turn forestland into coffee plantations, many people earn money by actually planting and caring for trees. As the pressure for increased agriculture increasingly threatens forests, Vương hopes PFES payments will increase. “I hope the PFES project will continue to increase service payments for local people,” he says. “The increase will maintain livelihoods from forests while facilitating better forest management.” 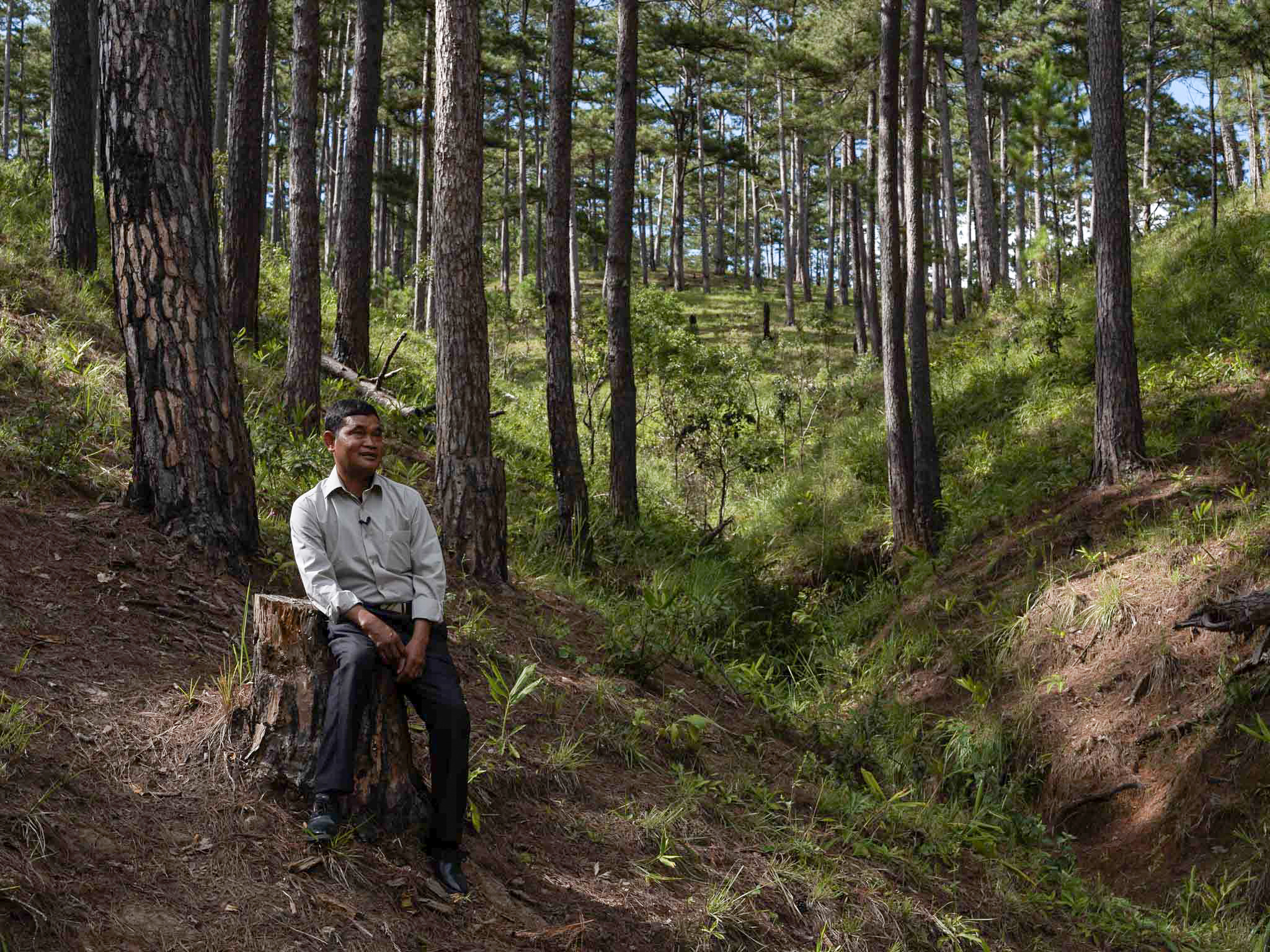